I have been going over the many builds trying to follow the detailed guides provided by this great community for my specific setup but I am struggling to get a reliable configuration.

The most recent update from bootcampdrivers.com uses AMD's release 19.8.1 but I now get BSODs with 'atikmdag.sys' error, that may or may not be specific to RX5700 XT with the release (at least according to the AMD user forum - quite a few complaints there). While bootcampdrivers seem to be the ideal setup I was wondering if there is a straightforward guide that I can follow to use the original AMD drivers.

Here is my configuration:

Basically I would like to know how I could get the original drivers to run the eGPU. Using 'EnableFalcon=TRUE' in the config file rarely works and I don't know why.

Many thanks in advance!

If you don't need the internal display, you can use the original Radeon drivers from AMD website directly. Modified Radeon drivers from bootcampdrivers.com are for compatibility with both Radeon Pro dGPU and Radeon eGPU. Also prior to updating drivers, it's best to run DDU and remove existing graphics drivers and PCIe allocation to devices.

I haven't tried removing PCIe allocation yet - mostly since I am not sure which to remove. I am going to post a screenshot of HWiNFO64, maybe you can advice what to do? 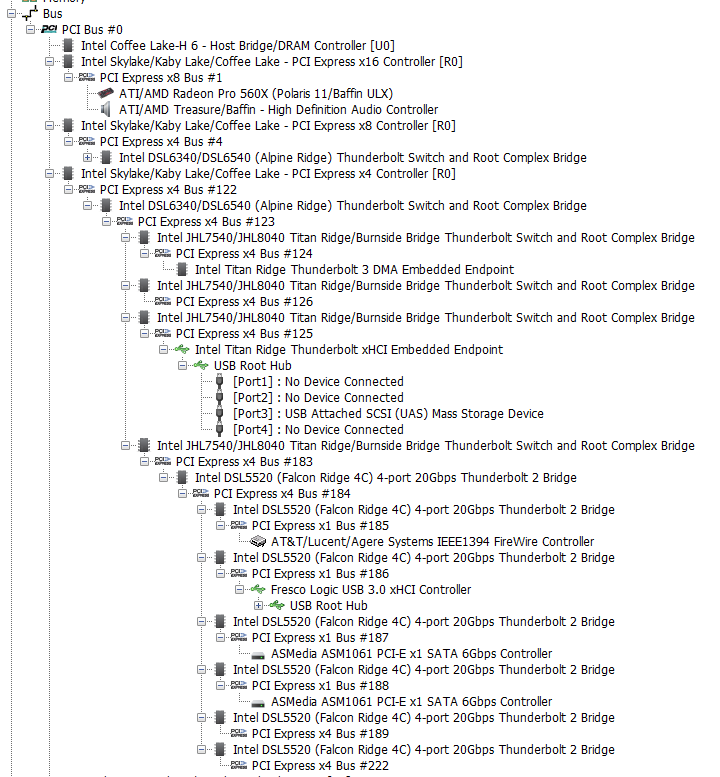 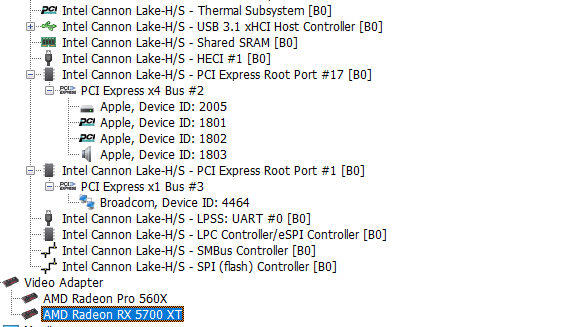 Also, Oculus Software complains after reboot that 'New drivers are required for your graphics card'. 'The drivers on your AMD Radeon RX 5700 XT graphics card are out of date. Please upgrade to driver v17.11.2.'

Not sure if it will work or not on mac but my situation is quite similar.

My laptop comes with Vega M GL which is not recognized by the official AMD setup software. If one does not have an external AMD GPU that can be installed with official driver, he can install the GPU with inf and device manager then install Radeon Settings manually. The problem is that HDMI and Audio drivers are not installed. Don't know if these two will pop up as unknown device in device manager if  HDMI display is plugged in. Make sure you prevent Windows to auto update driver on the GPU otherwise it will try rollback to older driver.

If there is an external AMD GPU that can be installed with official driver, then simply install the driver for external GPU first then install the internal GPU with inf. This method is obviously better than above and most likely the perfect way to get around the driver installation issue.

I went back to a previous copy of my installation (vanilla Windows 10, 1903, with Bootcampdrivers July'19) and now it seems to work. I am wondering if (and how) DDU is not rolling back newly installed drivers properly and remaining settings or files might interfere with the installation of a previous driver version.

In short, complete new installation of Windows 10 followed by Bootcampdrivers seems to do the trick. My rig has been running w/o problems for days now using July version of Bootcampdrivers.