This is my first eGPU build. Wanted to try if this is really a thing, so the setup is as cheap as possible, but also successful one.

First attempt using mPCIe adapter connection failed, apparently ZBook only accepts whitelisted devices on these mPCIe ports. Anyway, ZBook G1 has also an ExpressCard port, so I decided to follow the approach from this post: https://egpu.io/forums/builds/2012-14-hp-8470p-9600gt4gbps-ec2-7-egpu/

Soldering was not trivial; I made a lot of shorts but at the end multimeter probing revealed that the adapter is ready.

I had to use DIY eGPU Setup 1.35 to disable dGPU. After that, Windows just boot, then I installed the newest Nvidia drivers v445.87. Works fine on external display. Got stable Gen2 connection, with adapter's stock USB cable (the blue one), later replaced to 1m one (this: http://www.haing-tech.com/product/277950449). 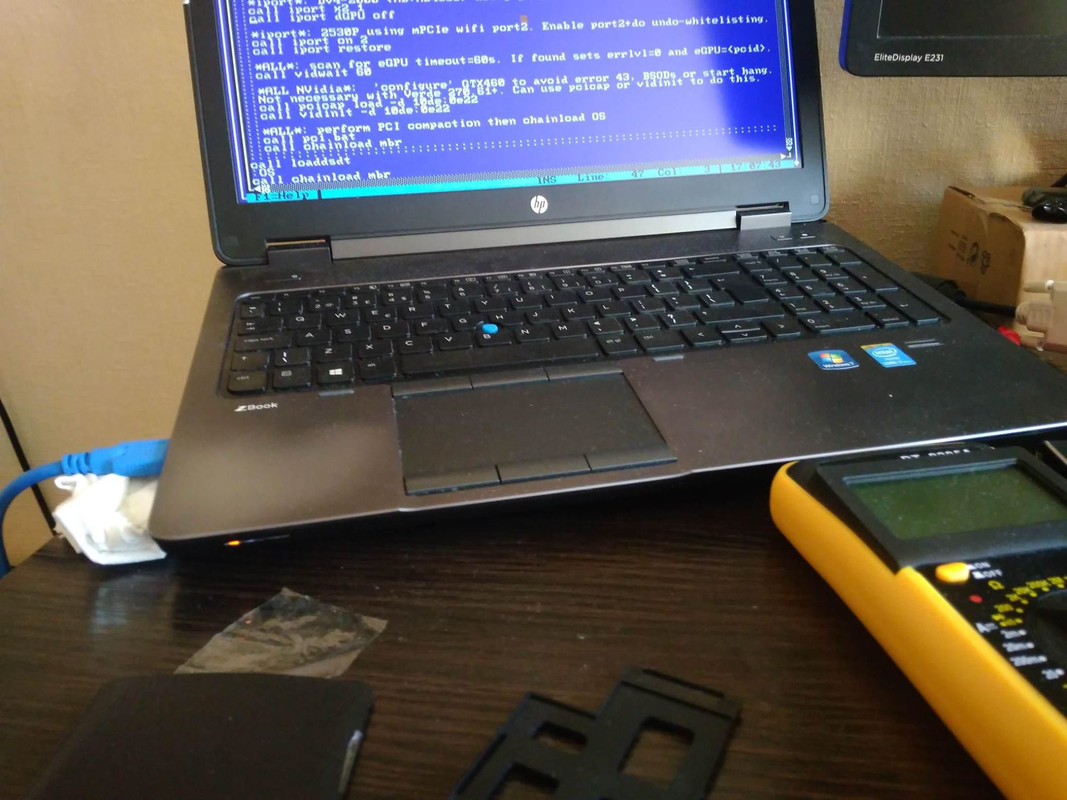 P: After connecting, eGPU is not detected at all

S: Took a multimeter and analyzed if there are not any shorts on soldered ExpressCard to USB adapter Found it and soldered once again. It is important to measure the connections after this, again with multimeter. After I had connected and run the whole thing, it finally got detected by DIY eGPU Setup 1.35 program.

P: The eGPU turns itself off after 1hr of playing games

S: Measured the voltage output on 12V line. Turned out that there are significant voltage drops (11.41 under load, occasionally drooping to 11.35 before shutting down). I have added a 4R7 resistor to 5V rail to generate artificial load there, according to this blog post: https://brazenartifice.wordpress.com/2011/12/26/atx-power-supply-5v-load-resistor-for-better-12v-regulation/  This helped and now voltage on 12V line never drops below 11.8V

Hi there.
Did you take any pictures of the internals of the expresscard connector before closing it?
Just got curious about if jclpcb stocking expresscard connectors. Or did you adapt an expresscard adapter intended for another use?.
Anyways, Nice work soldering that and troubleshooting the power supply.
I'm using the same laptop model you are showing here.

sorry for the late response. Not much about internals - only these two blurry photos:

I adapted the Expresscard to USB 3.0 adapter, this one: