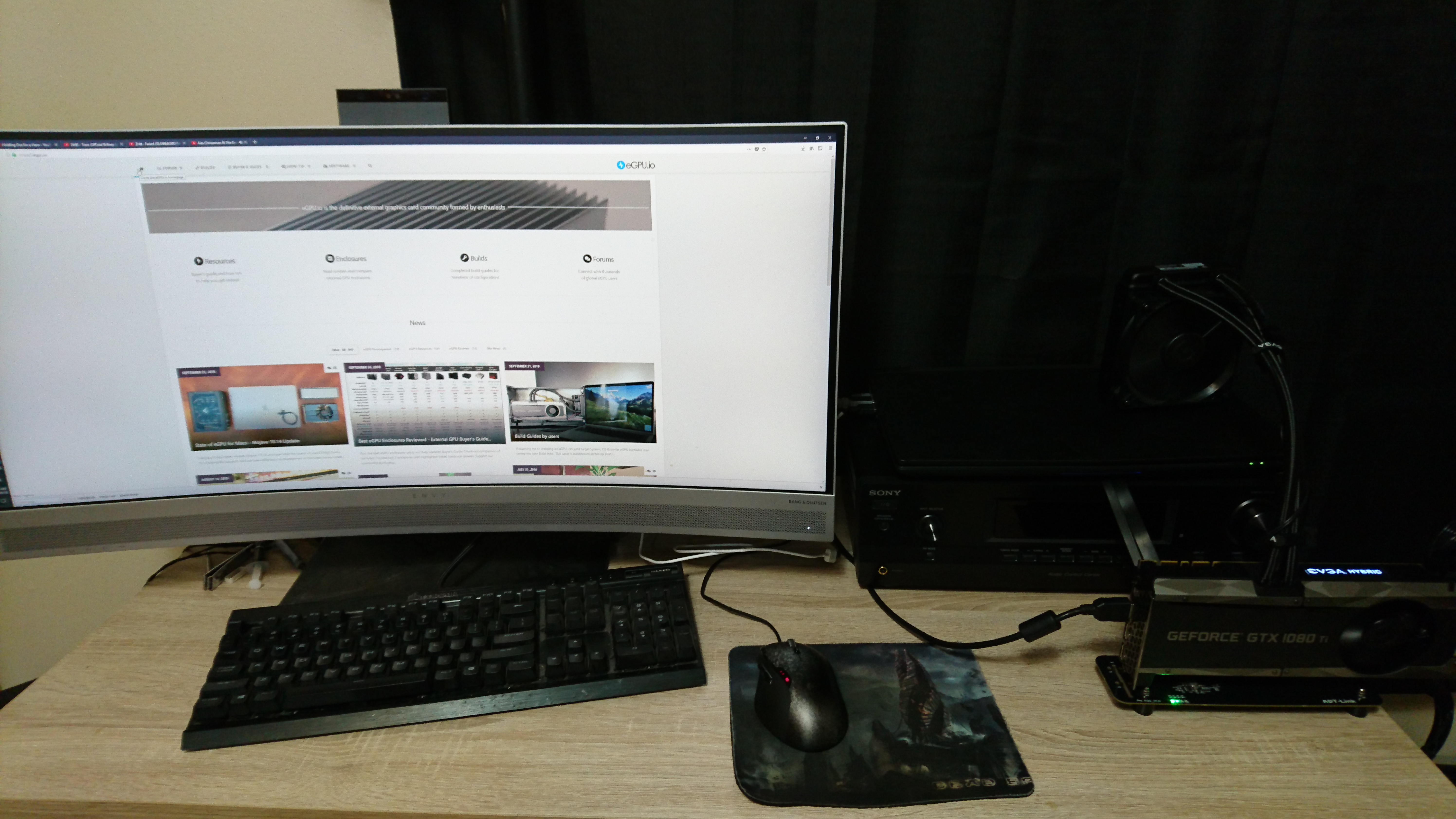 I'd to begin by saying thank you to nando4 for his work on nvidia-error43-fixer, without him or his work, this guide would not have been possible.

Ten months ago, I published my M.2 eGPU build guide, in which I demonstrated that a Vega 56 was enough to run demanding games at 1440p ultra-wide - or at least Warhammer 2. While that still holds today, consumer tastes ( including mine) have since shifted away from high resolution monitors. With the growing popularity of demanding VR games like Fallout 4 VR, the surge in $99 Virtual Reality Headsets, and the race between manufacturers to release higher resolution HMDs (VR Headsets); yesterday's flagships are becoming ill-equipped to deal with the growing demand for visual fidelity.

Up until now, if I had wanted an upgrade from my Vega 56, I essentially had two choices. I could choose to build a desktop, defeating the purpose of owning an eGPU in the first place, or I could purchase a $250 Thunderbolt 3 dock, reducing available bandwidth and possibly performance. Unfortunately neither of those two options were cheap or attractive, however, thanks to nando4's nvidia-error43-fixer, I can now run a GTX 1080 Ti through 25cm ADT-Link R43SG as I originally intended.

Since this is the first build on egpu.io with the ADT-Link-R43SG,  here are a collection of pictures for those who want a.  Basically it functions like any other m.2 egpu dock and very similarly to an ADT-Link R43SL. The noticeable changes are that it uses a 4 pin CPU cable and 24 pin ATX cable for power, and that it has switches ( pictured in previously linked album) for what I believe are compatibility purposes. Note in the third picture there are ports/holes the for 5v, 12v, 3v and ground. In my limited testing, the 12v port ran at 12.31v, the 3v ran at 3.32v and the 5v port ran at 5.04v.

1)  I connected my 25cm ADT-Link R43SG to my laptop's HDD bay m.2 port, connected the 4 pin CPU cable and 24 pin ATX cable to my ADT-Link-R43SG, physically inserted my 1080 Ti in my m.2 dock and installed all necessary power cables before turning on the laptop.
2) After one or two restarts, my 1080 Ti was detected (As Microsoft Basic Display Adapter) and I installed the 411.63 drivers from Nvidia's website ( you may choose to just click update drivers as shown in the screenshot, though you may end up with a seriously outdated driver) and then rebooted.
3) I opened device manager and confirmed that I had error 43, I then proceeded to download nvidia-error43-fixer and I ran the included .bat file as administrator, when asked if I wanted to patch, I typed Y for all options culminating in this screen and then I rebooted
4) I noticed the VRM fan on my 1080 Ti was spinning erratically (4.5k RPM) and so I disabled the GTX 980m in device manager and rebooted

After which I was done, the GTX 1080 Ti behaved as expected. I performed the same installation on a Zotac 1070 Min and EVGA 1070 Ti Hybrid and found the installation process to be exactly the same.

For the synthetic benchmarks, I've picked settings that are as similar to the ones found in itsage's RTX 2080 build guide. I've done this with the hope that an apples to oranges comparison could be made, and specifically that a bandwidth and performance difference could be inferred from the scores. Unfortunately I can't say I believe this is the case. As for the gaming benchmarks, I've decided to display two games Marko RID (RIDmARK -SRB-)
(@marko_rid_ridmark_-srb)
New Member
Joined: 2 years ago
Posts: 2
December 9, 2018 3:08 am
Hi Robert,
Congratulations for you Great build! 😉
I have a question about "ADT-Link R43SG" adapter, because I'm looking to make a similar build likes your...
I saw in the pictures that you put 4 pin CPU cable from power supply to ADT-Link R43SG adapter.
Can you tell me please if is it required only for high end GPU or for every GPU connected on this adapter?
I was thinking that 24 pin ATX cable from power supply to ADT-Link R43SG was enough for every GPU,
unfortunately I wasn't able to find nothing on net about my question, so I decided to ask you.
Thanks in advance.

My 1080 Ti seems to run just fine when the ADT-Link R43SG is only powered by an ATX motherboard cable. I didn't notice any difference in performance or functionality after removing the CPU cable.

Thanks Robert for your reply really appreciated.
I'm new into this world... so I would to be sure about correct wiring with ADT-Link R43SG Adapter.
I'm looking for one of this 2 GPUs:

Regarding PSU I get 2 choices (in order for GPUs):

Finally, like you said in your reply:
ADT-Link R43SG slots:

There is important question about it, can you use egpu in your laptop screen with nvidia cards?

It's crazy howpowerful the GTX 1080 Ti is, especially at high resolution. For almost 2 years now, AMD is lagging for years. Will they ever catch up?