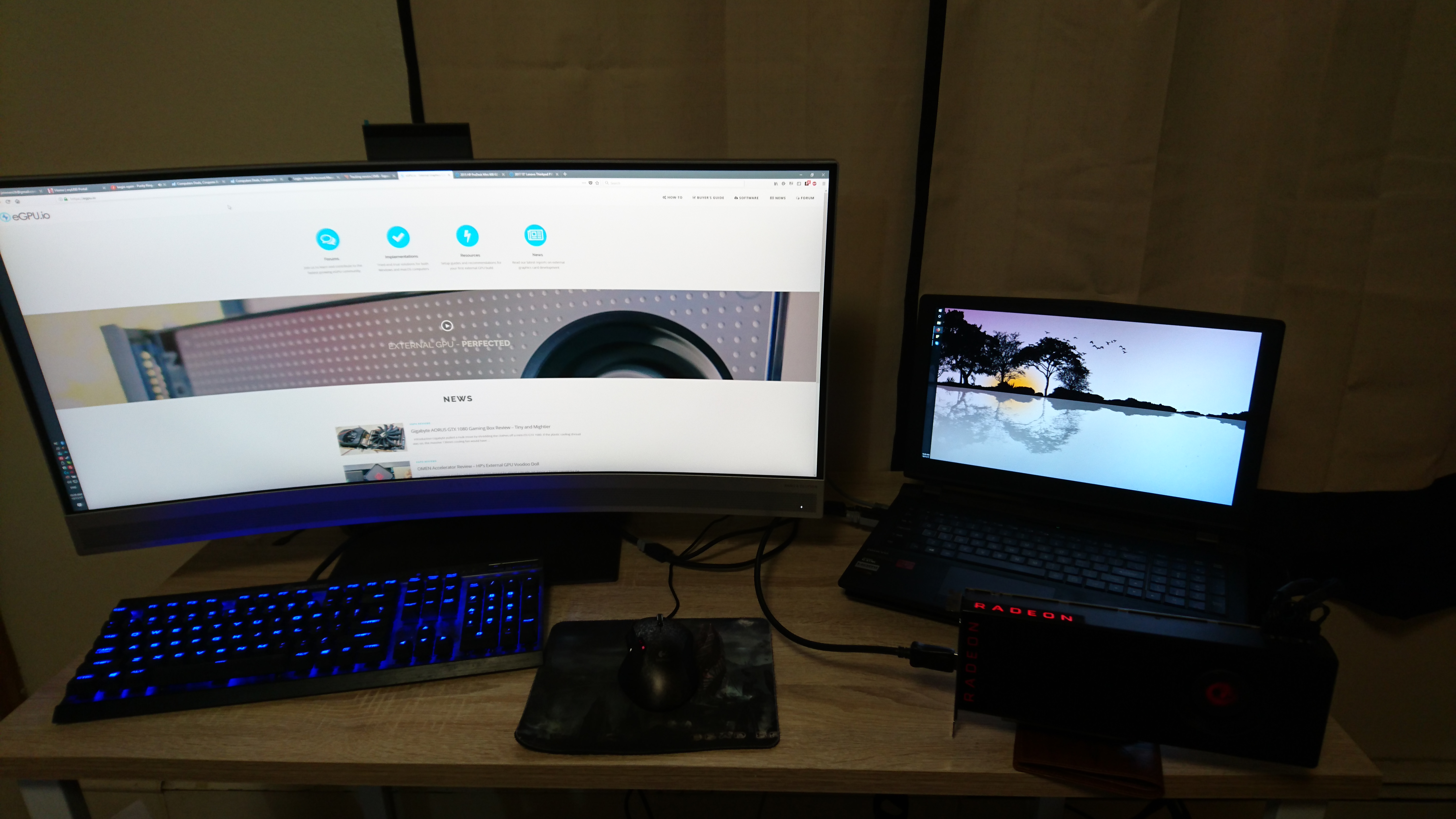 Before I begin I want to thank the egpu.io community as a whole for their implementation guides and reference tables. Without them I would have never made the jump from using my laptop's dGPU to my shiny new Vega 56 desktop GPU.

I've opted to get an M.2 eGPU setup as I dislike the idea of spending $300 for a TB3 enclosure that effectively gives less than x4 performance. For this guide I will be showcasing two M.2 egpu docks. As I didn't want to shell $100 on a non-returnable EXP GDC Beast only to find out it isn't compatible with my laptop.

Warning: for any of you considering a CHIPAL M.2 to x16 adapter, you should know that leaving the eGPU adapter connected to a running PSU while your laptop is off seems to be an easy way to heat and maybe burn your graphics card. Just the other day I left my Vega 56 connected to the  CHIPAL M.2 to x16 adapter with a running PSU and my laptop off, and after 30 minutes to an hour the card was hot enough to burn my hand but of course since the laptop was off, the GPU fan never started spinning. This problem doesn't occur with the ADT-Link R43SL as the R43SL doesn't actually power the graphics card unless the connected laptop is on.

I don't know why this is the case, and I also don't have a fix for it and so I'll recommend you use the one in the HDD bay. Otherwise all you have to do to get the ADT-Link R43SL or CHIPAL M.2 to x16 adapter to work is to plug it in, power it on, connect and power your GPU and start your laptop.

The only issue I ever ran into was that my laptop would sometimes not detect the eGPU, and all I had to do to get it to detect was restart it once ( 95% of the time) or restart it twice ( 5% of the time). After that you simply install the appropriate drivers and hookup an external monitor and you've got a working eGPU.

Settings are exactly the same as the 1920x1080 settings, but the resolution has been increased.

@Robert, thank you for implementation submission. The desktop RX Vega 56 video card @ x4 3.0 a great companion for your desktop CPU.  The Total War Hammer @ FHD 84 vs 43 FPS result for x4 3.0 and x1 3.0 highlights the performance difference between bandwidths.

A couple of points:

- any pics of the system + eGPU that can be shown in the intro to bring it all to life?

- can you confirm the Chipal x1 adapter ran at x1 3.0? Something I've been curious about. This is best answered with a hwinfo64 & AIDA64 GPUGPU bandwidth screenshot. Your 6th gen chipset has a 8Gbps x1 3.0 wifi M.2 slot. Just wondering if the BIOS allows that full speed & whether the Chipal adapter, with it's USB 3.0 cable (5Gbps) transmission cable, can maintain a reliable 8Gbps?

- equally then, did you test your x4 M.2 adapter in the slot next to the CPU? The BIOS may upspec the link from the shown 2.5Gbps to 8Gbps.

I just wanted to correct myself first, earlier I mentioned there was a m.2 slot next to the CPU fan - I meant to say it's next to the GPU fan. As for the ADT-Link-R43SL, I got the 20cm cable length option. The GPU-Z bus interface shows x16 3.0, even on the Chipal x1 adapter. You'll notice in the linked screenshots later in this post that aida64 reports the same.

@Robert, for the ADT-Link-R43SL, I am not seeing any performance differences between the M.2 slots.

As for the Chipal x1 dock, there is a difference:

The HDD Bay is giving us 8Gbps-M2 bandwidth. Impressive as I wasn't expecting the USB 3.0 interconnect cable to deal with the higher 8Gbps operating frequency.

The slower speed on the GPU Fan M.2 looks to be due to bit errors & error correction being engaged. Being close to the dGPU, there is more EMI noise there which the Chipal's USB 3.0 cable may not be insulating against well. If you have a ferrite bead, then try adding it to the USB 3.0 cable to see if it helps like shown. If not, try wrapping the USB 3.0 cable up in aluminium foil. Re-test to see if H2D numbers boost up.

To get accurate details of the link with the notebook,  go up a few levels in the hwinfo64 tree and look at the AMD Vega10 - Switch Upstream in PCIe link details. It's the one that connects with the notebook PCIe port. I'd expect it to report x4 3.0 (ADT-Link) and x1 3.0 (Chipal).

Starting with the Switch upstream - HDD Bay M.2 slot w/ ADT-Link R43SL switch upstream. I also wrapped the Chipal's USB 3.0 cable with Aluminium foil as seen here and connected it to the GPU Fan M.2 slot and ended up with this result.

I wanted to add that even with the Aluminium foil. Running a Chipal x1 adapter through the GPU Fan M.2 slot is highly unstable. Whether the memory write bandwidth is 200 mb/s ( I tested this when I first received the chipal x1 dock a month ago) or 715 mb/s after being wrapped in Aluminium foil. I cannot get the dock to work for more than 10 minutes as the desktop becomes very stuttery and will generally crash within 10 minutes of starting windows.

I ran aida64 a second time and got a memory read bandwidth of 764 mb/s but was unable to obtain the memory write speed as the laptop crashed before completing the aida64 GPGPU benchmark.

@Robert, so we see then the EMI noise near the GPU Fan M.2 slot is the cause of the Chipal x1 dock instability. The ADT-Link R43AL differs to the Chipal by running it's wires in a parallel fashion, so with differential encoding are better suited for transmission near noisy sources, as your tests prove. Still, for a US$7 adapter, the Chipal seemingly can do 8Gbps transmission in your HDD Bay M.2 slot with a less EMI noisy environment.

What eGPU adapter and what model graphics card are you using?, I can still use my Vega 56 with my laptop's internal monitor.

@robert_evans how did you get that to work? (using the internal monitor with amd graphics)

@nando4 do you know about someone testing an egpu (amd, especially vega would be nice) on the asus gl702zc eight core laptop?
confirming that it would work would pull the trigger for me