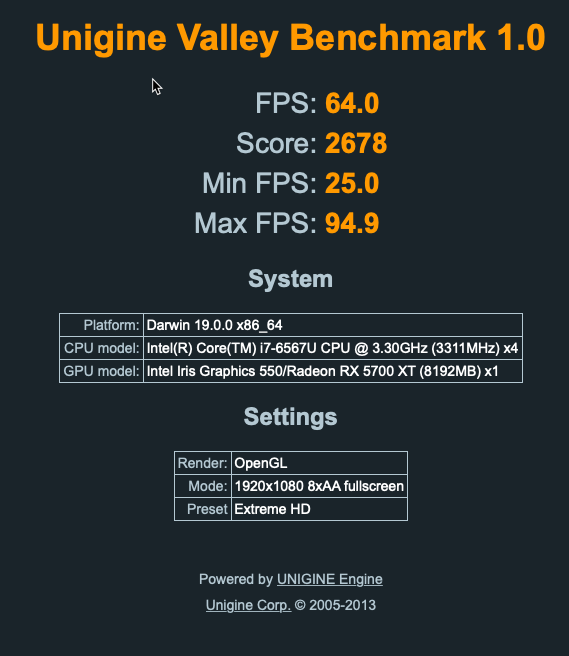 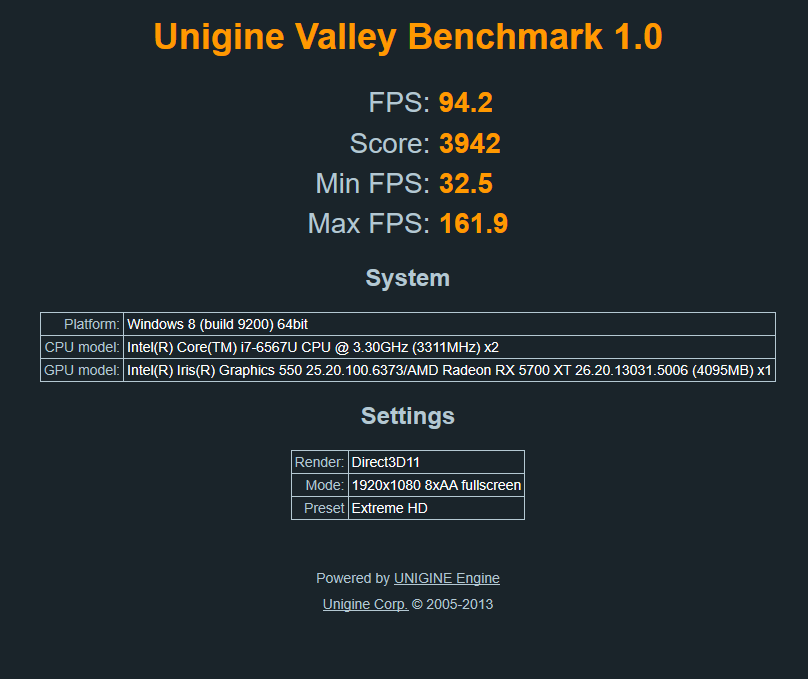 Getting rid of error 12 was the worst and most time consuming part of the process.  A lot of trial and error.

Also, the difference between Unigine scores in macOS vs Windows is somewhat deceiving.  I ended up seeing a significant increase in performance in actual games, sometimes 3-4x faster in Windows, but that can vary from game to game.

My original intent was to not bother with a Windows install, hoping that a card like Radeon 5700 XT was going to be "good enough" from a performance perspective for older games, even in macOS.  Unfortunately, that was not the case.  Pretty basic games like CS:GO and Civ VI were getting pretty low FPS (15-30) in macOS, while using Max/Ultra settings.  Some of this is due to the higher 3440x1440 resolution of the LG external monitor.  But the performance in Windows ended up being significantly better, so I am glad I got it installed in the end.

@karant Welcome aboard and nice build! Regarding the low Unigine numbers it could be a number of factors. First of all which particular Thunderbolt 3 port did you connect the eGPU? Did you set the external monitor as primary display?

@itsage, thank you for the quick reply.

TB3 is connected to the top left port on MB Pro.

I do believe I have the external display set as primary - Systems Preferences > Displays > Arrangement where external monitor has the white menu bar on top of it, and laptop display does not.

@karant Using one of the left Thunderbolt 3 ports is good because you get full TB3 bandwidth instead of half on the right sided TB3 ports. I posted my PowerColor Red Devil RX 5700 XT build this morning which is very similar to yours. While I didn't run any benchmarks in macOS, I've seen it much higher than what you got. Have you tried closing the laptop display so that everything is going the external monitor?

Well, a good old restart seems to have fixed the issue.

Here are the new results with score of 2678.  Not 3000 score I was hoping for, but definitely closer to what other people are seeing.

What score are you getting under macOS?  I see that your build screenshots only include Windows scores.

I am curious what kind of improvement I would see from the latest MacBook Pro with 2.8ghz quad-core 8th gen i7 processor...

We really need some pics of this set up... I’m looking for a new monitor atm and the specs of this one are impressive...

hey ! have u tried playing Fortnite on mac? I have nearly the exact same setup ( Macbook pro 2019) and when i Start Fortnite on macos i only get 15-25 fps.

I have run Fortnite on MacOS... it is not optimized for the architecture of Mac and will run poorly. I can, in barely passable settings, get 60-100 fps... it also lacks Freesync in the MacOS run, so you will not be happy at all.

On my MacMini, I only have the eGPU connected to the Tb3 to keep the card that runs it wide open (I use usb3 type A and a powered hub for everything else, seems to perform better). When I connect my 1080p gaming monitor, it is overkill... I can actually turn up the settings to use the remaining CPU power.

Will take pictures of my updated rig (sorry @itsage for not updating my build thread).

I have my hands on a Nitro+ 5700 XT which showed up last week. Due to projects though, I need my machine to not need a rebuild for now.