I started this build mostly to see if I could. I use a MBP for work so wanted to see if I could use it as a gaming computer, but not losing my Windows install if I upgrade. It totally works, with a lot of weird things. I just wanted to share my experience for everyone else. 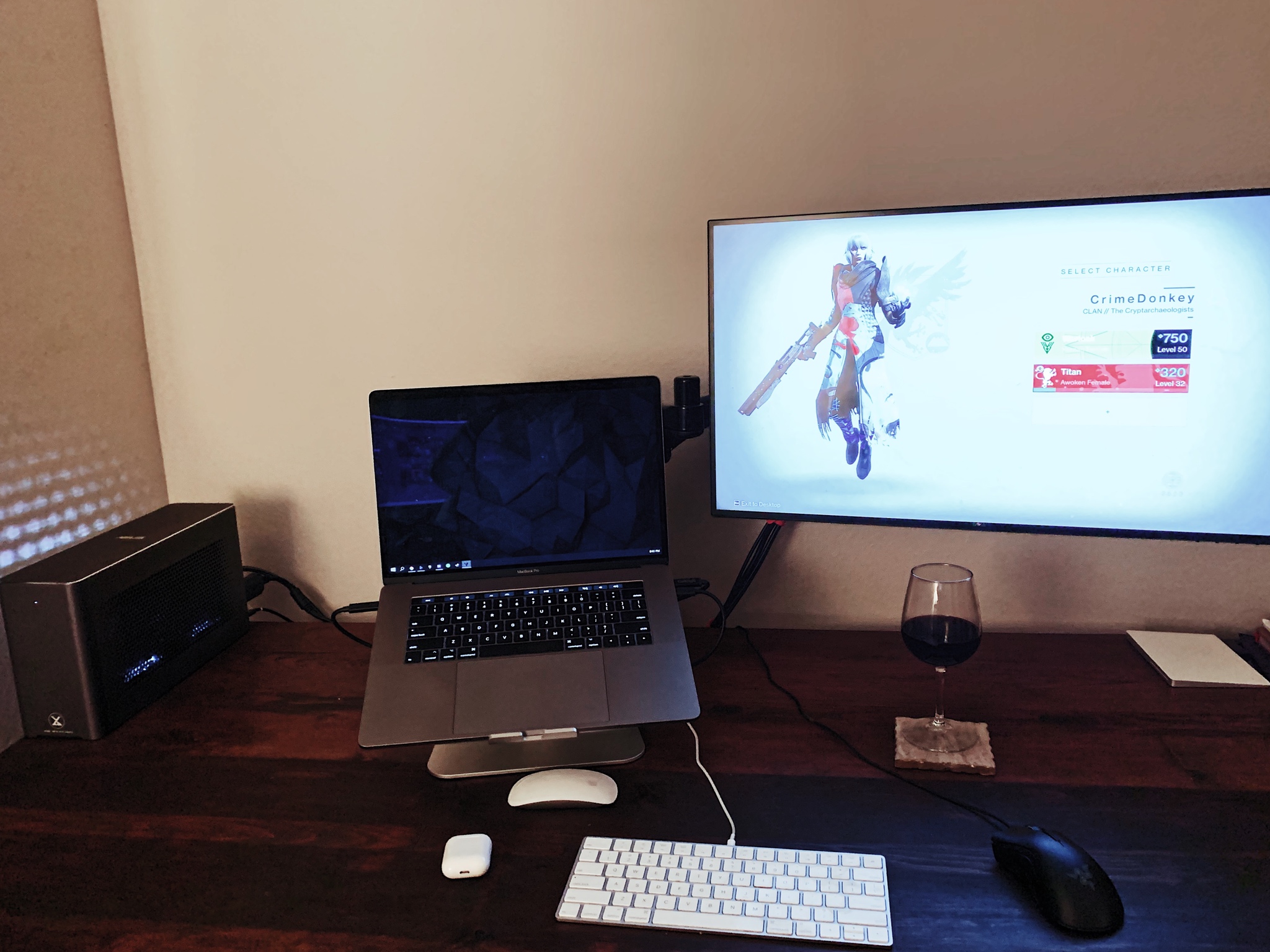 Installing Windows on SSD
The TB3 SSD acts as an internal drive so it sounded possible to install Windows on it and keep full functionality. I heard that external drives without TB3 have a lot of issues running Windows. After trying, it totally does work fine. I made a boot drive on a USB stick with the Windows installer and bootcamp drivers on there so I can reinstall in the future if needed. This makes my MBP totally modular.

Gotchas: I did accidentally unplug the drive while Windows was running. I don't recommend doing that. It was really unhappy. I also have had a few issues of unplugging the drive while on the OSX side and the next time I booted to Windows, it reinstalled drivers and all my games were acting like they weren't installed anymore (the files were still there though...). I don't actually know what caused that but doesn't happen too often. I'm trying to remember to unplug the SSD when the laptop is completely off.

Windows 1803
After a very normal Windows installation from the USB drive, I installed Bootcamp drivers and a few other things. Mouse drivers, security updates, etc. I plugged in the XG Station and after about 30 seconds it recognized it but didn't have drivers. GeForce Experience recognized the card then and installed fine. I ended up flashing the eGPU with the ASUS tools online but they're quite garbage and don't really tell you what they're doing. I don't really even know if that's needed either. A few restarts and settings changes, I had a working dual screen setup. My laptop screen was running off of the Radeon, my external monitor was running off the 2070. No bootloaders or anything. Doesn't matter when I plug the eGPU in (preboot or hotplug), it just seemed to work.

I've done this twice, once at the beginning, once again after messing everything up a Windows Update which I talk about below. No real issues either time. I'm still surprised at how easy it was.

Windows 1903 (.1 - .295)
I wanted to play Gears 5 a couple weeks ago and it required a newer version of Windows. I naively updated Windows and problems started. I can still run the eGPU on earlier versions of Windows 1903 but if I have the eGPU connected during boot, Windows hangs before the blue spinner should start spinning and forces me to hard restart the MBP. Weirdly enough, after a hard restart it does boot but the eGPU isn't recognized. In Device Manager, the port is yellow banged but not error 12. If I disable the port, then enable it, everything starts working again. I have to do this every time I boot up right now.

If I hotplug after Windows is already running, the eGPU is recognized immediately, but weirdly enough I completely lose sound. I don't have any other audio devices besides the built-in laptop speakers so I don't know what's happening. I need to do more tests. This method would be way more convenient, except for the audio issue.

Windows 1903 (>.295)
Error 12. No go. The first time this happened I just reinstalled 1803, which was fine, but still wouldn't run Gears 5. Updating again and then uninstalling the specific Windows Updates (KB...356 and KB...384 I think are the ones) seems to bring me back to ^ so that's what I've been doing. I just disabled the Windows Update service to prevent it automatically updating. A lot of others have this problem, so I don't have any more info here.

Comments
This setup is way quieter and about the same performance as my SFFPC build with a 1060. If Windows doesn't fix the issues, I'm tempted to convert this back to a dedicated PC. It's really convenient having a completely modular setup though but everything since 1903 has been frustrating.