I just upgraded from AMD RX590 to NVIDIA 3060 Ti. I used to want the GPU to work with MacOS but now I realize the improvement on the few amount of video editing that I do is pretty negligible plus there aren't any games on MacOS (as of now). I'm a machine learning engineer, so I'm also thinking of starting some side projects, and NVIDIA CUDA would be very useful. 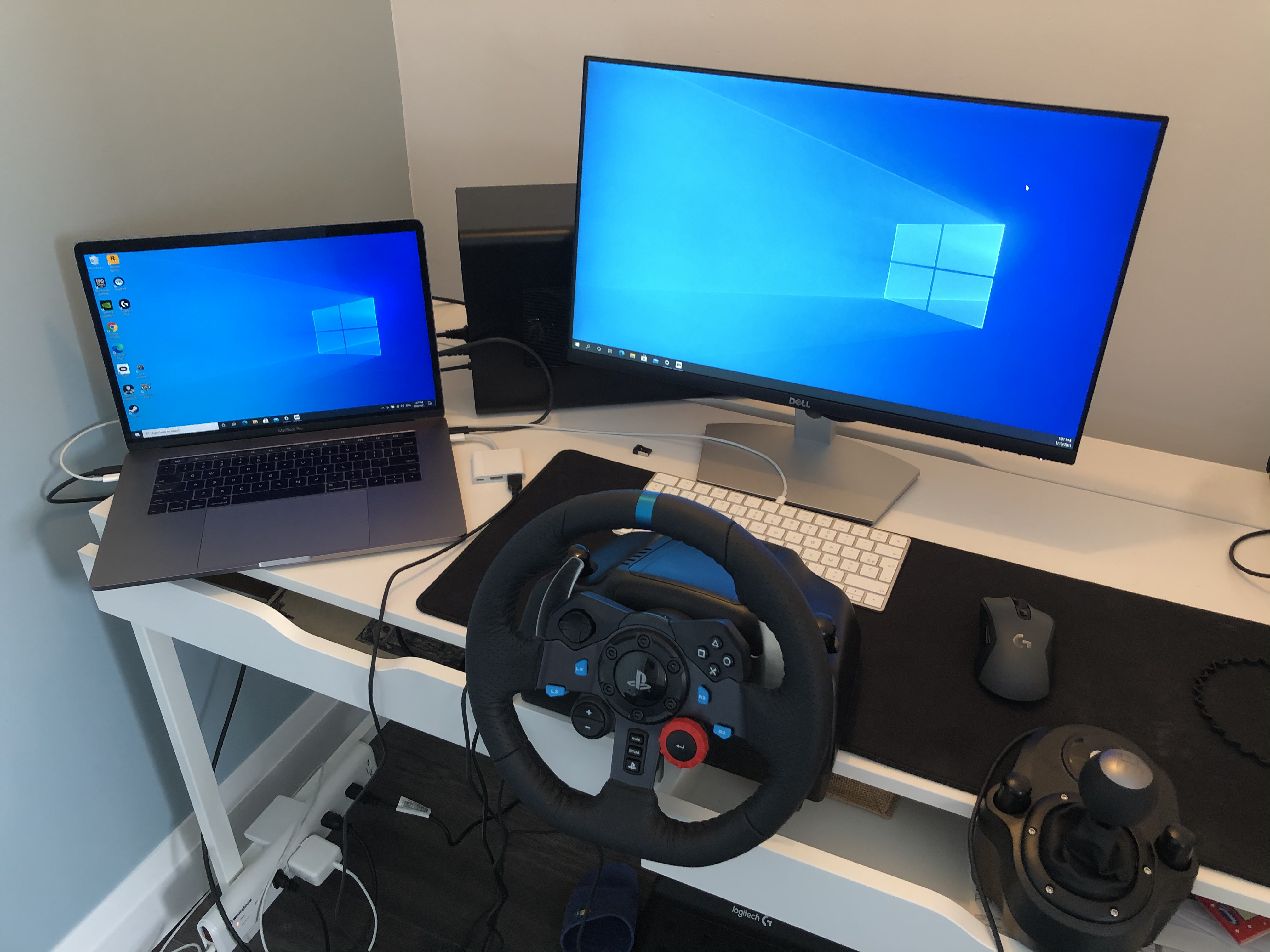 They say it's plug-an-play for NVIDIA cards with Macs, but maybe I'm misunderstanding the meaning of it: if I hotplug the eGPU it just instantly crash my computer...

I was on Windows 10 1903 because my previous card RX590, but it always crashes no matter if I hotplug, coldplug...the card wasn't even recognized in Device Manager, so I tried to install the NVIDIA driver from the website, but during installation my computer crashed. When it's rebooted, there's still nothing.

I figured maybe 1903 is too old for the 30 series, so I wiped that bootcamp partition and installed the latest Windows 10 with all the updates. At first I tried to hotplugging or coldplugging and then installing the driver manually as I've done previously, that still didn't work. I found some posts on this forum and what I did in the end was: use the upper right TB3 port, hotplug the Razer Core X, and waited for a couple of minutes. It actually triggers the driver to install automatically and that worked. Afterwards, I could never hotplug the eGPU again because it will still crash the system, but it works fine if I plug it in and turn it on before the Windows loading screen.

(As of now I've only done this benchmark for gaming, on an external 1080p display) 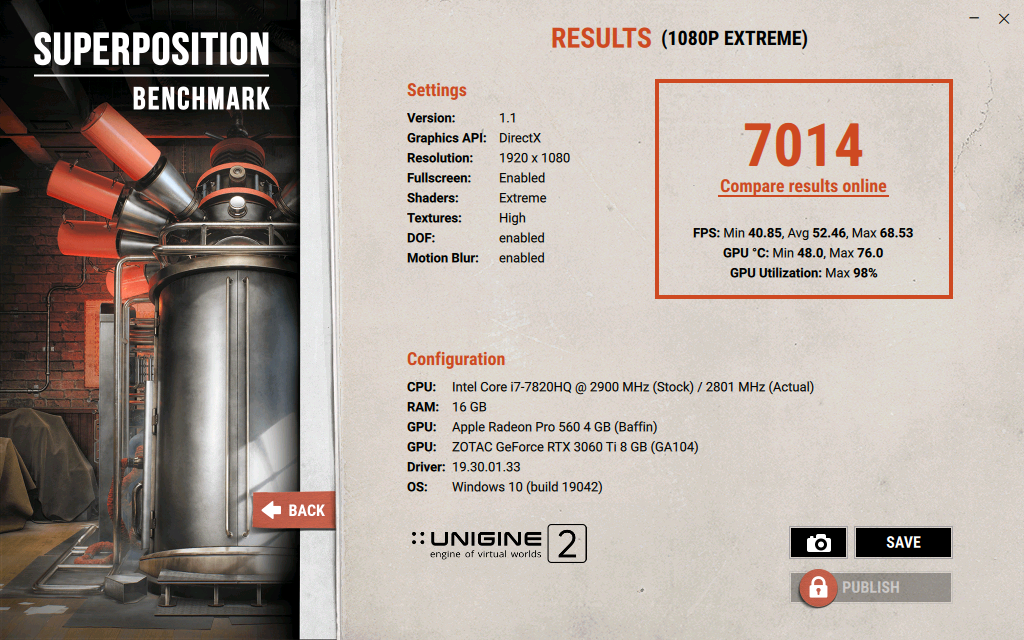 This setup gives me much better results when playing in VR through Oculus Link, much crispier with better graphics and fps in general that I can actually tell the difference. But I do know that there is a lot of performance wasted 1. because it's an eGPU, 2. because I'm using Oculus Link on the Quest. I've compared FPS with stats online using the same card, and like what I saw before with RX590, I feel like I might only be using less than 80% of its full potential.

I also feel kinda sad that I didn't do much research about the NVIDIA GPU brands, and as it turns out the one I bought (ZOTAC Twin Edge OC) was hugely overpriced, but I feel that it's probably why I was able to get my hands on it in the first place...

I think I might still build a PC out of it eventually, so as to have the freedom to run it as a server when (if) I actually get down to my machine learning projects...right now I'm just indulging myself with games.

Zotac are a great brand and every single Gpu is over priced and sold out atm so don’t stress it, at least you managed to get one!

Zotac are a great brand and every single Gpu is over priced and sold out atm so don’t stress it, at least you managed to get one!

Yeah I think I've come to be at peace with myself on that...

I own the same machine as you. I've been on the fence about trying an egpu as I'm not very savvy in windows. So far I've managed to get W10 Pro 20H2 installed & running on a Samsung T5 SSD and it works well. Primarily I want to run Space Engine. It works with the internal radeon gpu but it's slow.

Did you literally just attach it to the top right tb port and wait, no DDU or system/driver edits? If so I think I might try. I don't know much about Nvidia cards but do you think other less specd cards 1080/2080 might be enough?

@ottobyte, yeah no DDU or anything. I used DDU on a previous try and that seems to have messed things up actually. 1080/2080 will certainly work fine I assume, I don't know about space engine but it does sound more CPU bound...it also depends on the resolution of your display of course.

@whrichd, Ok thanks for the info. I'm just terrified of getting out of my depth, hence installing W10 on an external drive. I've heard horror stories about corruption on boot disks and the like so I thought it would be safer. Space engine is GPU bound so I'm led to believe so it should be fine. I may use it for other stuff, not sure yet...

The next issue - I can't find a decent GPU for love nor money anywhere!! It's crazy. I'll keep looking though as I want to buy the Razer Core at the same time. That way if it doesn't work I can send them back.

@ottobyte I've messed around with this macbook and my egpu for almost a year now, haven't had any issue. Boot camp is pretty reliable I'd say, if anything doesn't go well, I could just erase the whole Windows partition without issue (I don't put anything valuable in Windows, it's just for gaming)

For getting new GPUs, a tip, search for your favorite card in your favorite parts shopping website (not sure what people in the UK use), and use something like page monitor (Chrome extension) to monitor any changes - which means status of stock. I got mine that way.

Good for you doing your research before buying though, I definitely didn't do as much and just hoped for the best 😂

@whrichd, thanks for this post! I'll probably get this because my interests are almost exactly the same! Super happy to be able to confirm it'll work.