I'm fortunate to have 2 different 15" MacBook Pro laptops - one personal & one from work. I already have a triple monitor setup driven by a rather old Win7 desktop. It's great, but a little noisy. The goal of this eGPU build was to see if I could drive all 3 monitors with a MacBook from a single cable, including using the eGPU enclosure to connect to my USB peripherals and wired ethernet. If I could do this quietly, I would avoid buying a Mac Mini to supersede the Win7 desktop.

The monitors were purchased some time ago and have closely matched pixel density (more of a concern for Win7, macOS not so much). The Philips monitor has a built-in USB3.0 hub that hosts the peripherals.

If possible, I wanted to share the peripherals between the eGPU and Win7 desktop with some sort of switch.

My goal of a quiet setup was achieved with the PSU and fan replacement - wow, this thing barely makes a sound unless I push the GPU.

I already had the iFixit socket set with the flexible extender (very useful for taking apart the case). I used this right-angle screwdriver to make the fan replacement *much* easier. Watch out for all the rubber grommets when you take the Venus apart - they can spring quite far.

With the 120mm fan (I read that 80mm was the original size), for clearance reasons there is a mounting bolt omitted between the lower frame and the body of the Mantiz Venus. This causes a small amount of movement - I was able to shim the gap with some paper to prevent the movement. Changing out the PSU and fan was very straightforward once I received the right-angle screwdriver to reach the fan mounts.

I initially tried a USB3.0 switch to select between connecting the Win7 desktop or the eGPU to the USB hub in the Philips monitor. This was ok for the desktop, but connecting the eGPU enclosure caused problems. So instead, I now use a more manual switch - a short cable runs from my monitor and I use this dual-port USB3.0 receptacle to choose between the desktop and the eGPU. 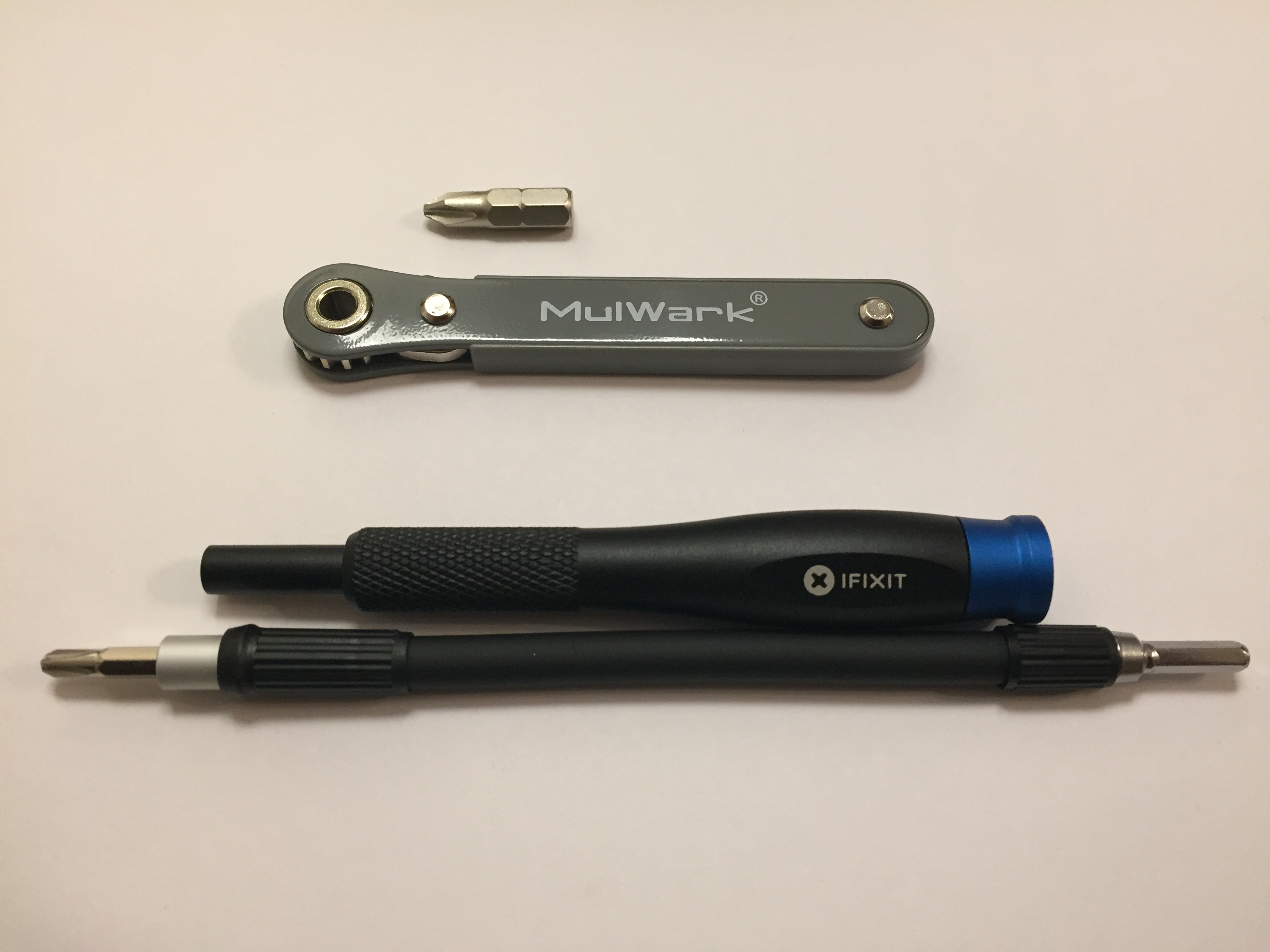 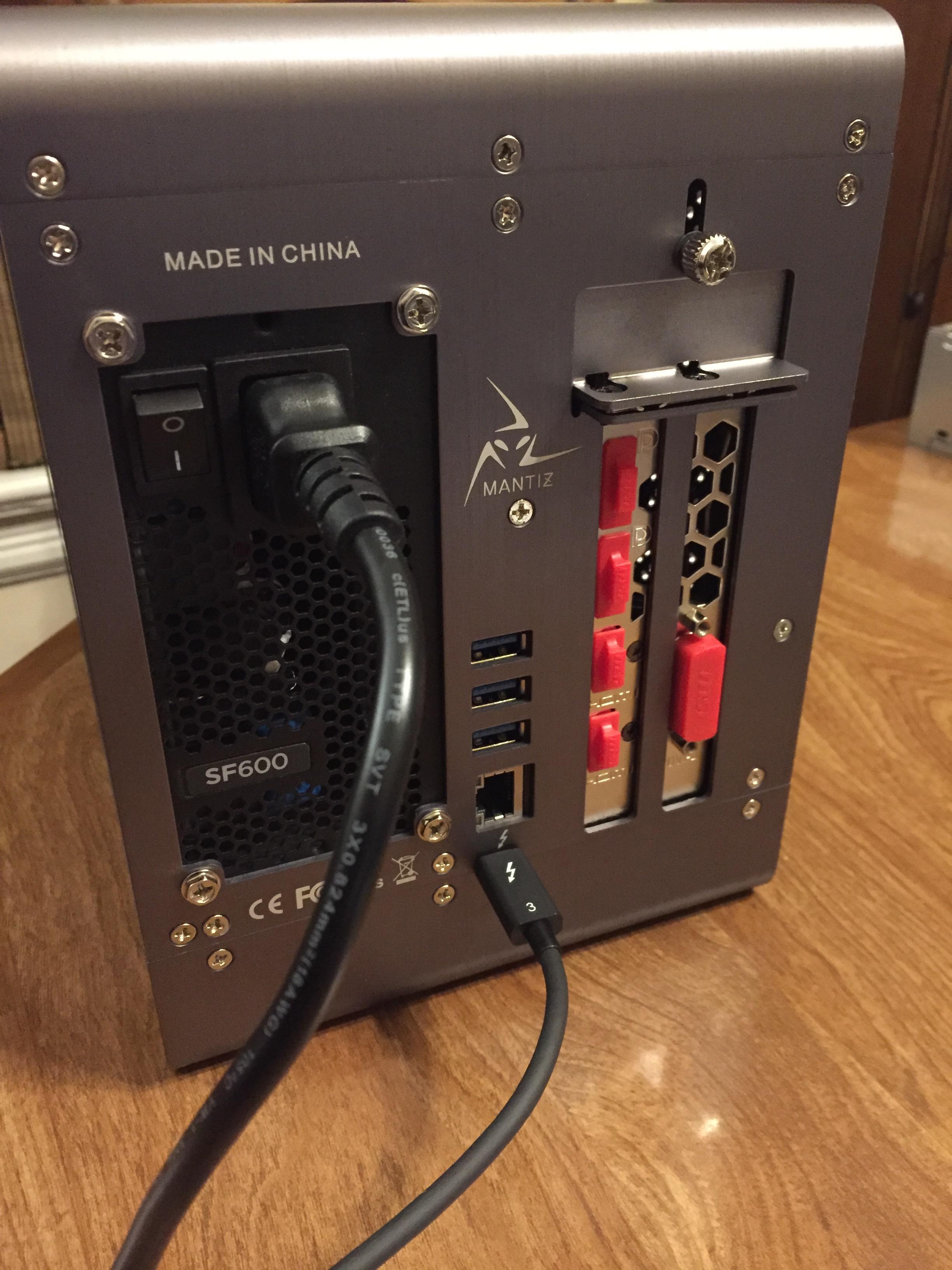 We're plugged in - the laptop is getting power and the GPU is active. The only fan spinning is the Noctua case fan... 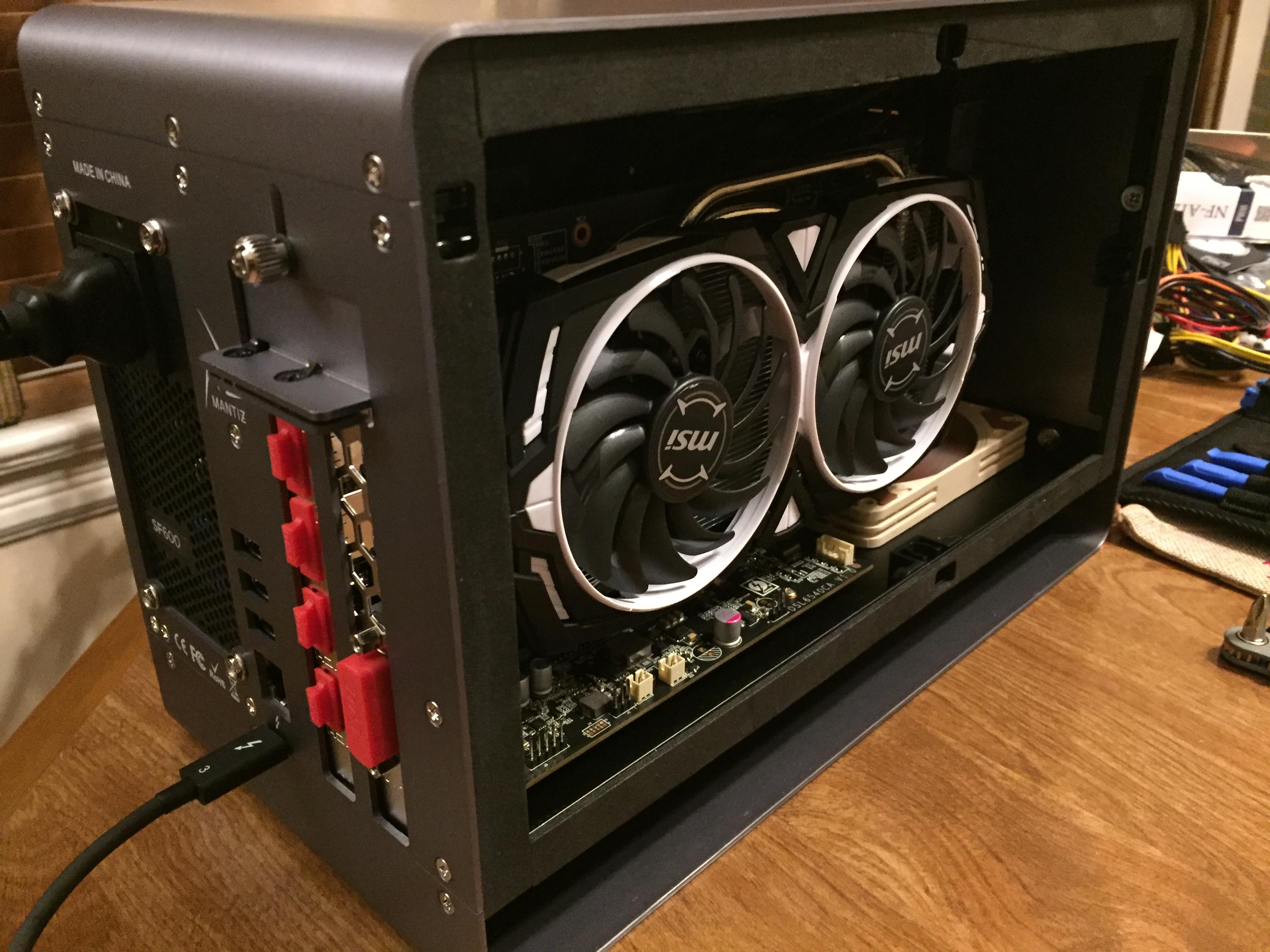 See - the Noctua fan is spinning, but I can barely hear it! 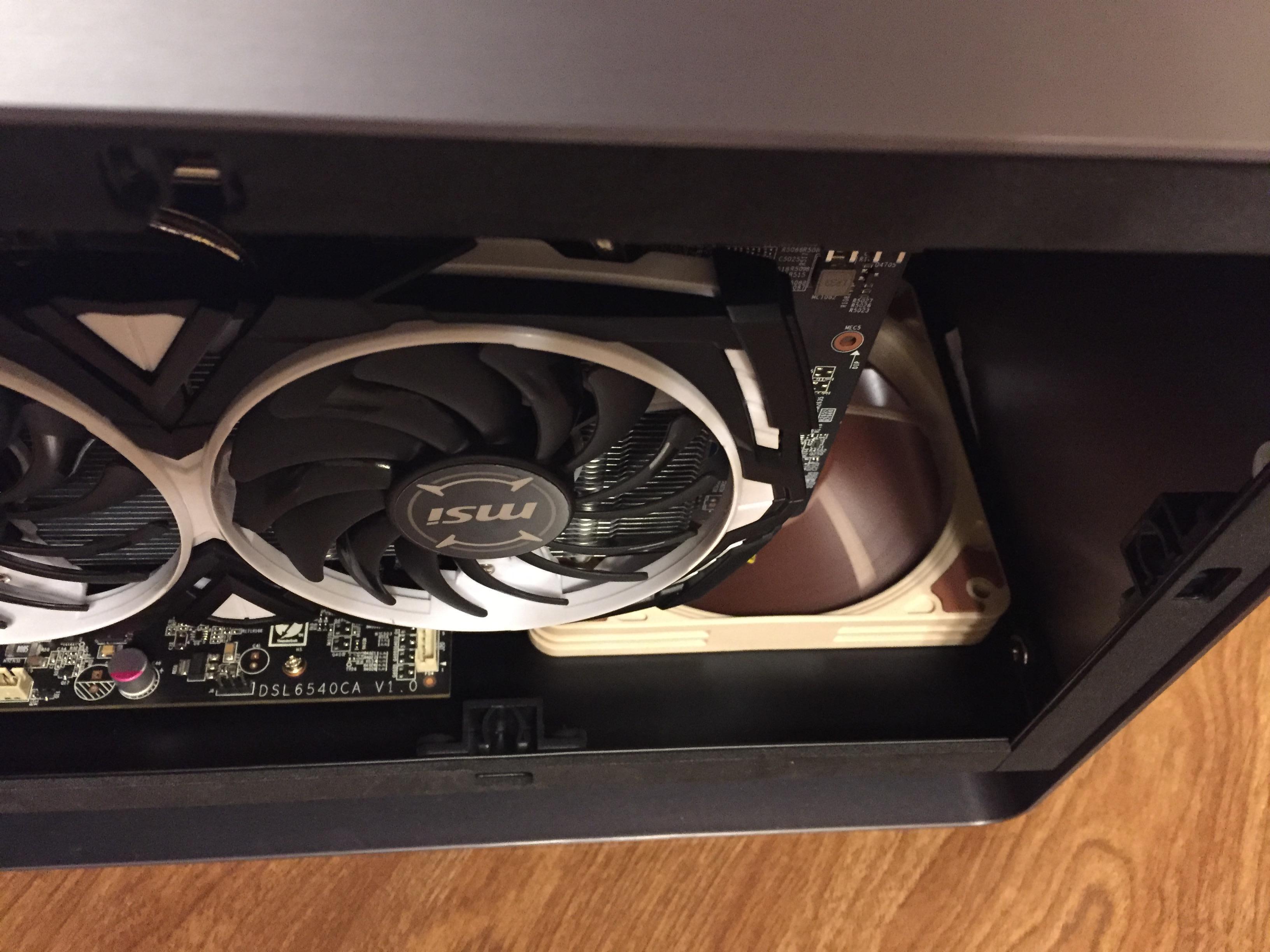 This setup works very nicely overall. I'm now using my personal MacBook in preference to the Win7 desktop for a lot of day-to-day activities. While my modifications are expensive, I was toying with purchasing a new Mac Mini to run the triple monitors on macOS. This eGPU route is definitely cheaper than the Mac Mini! Additionally, I regularly use this setup with my work MacBook, especially to connect to teleconferences. Running the triple monitors barely stresses the RX580 which keeps things very quiet.

My only complaint is about the disconnect process. Even though I try to shut down all the apps that are using the eGPU, I often cannot. In these cases the Disconnect "AMD Radeon RX 580"  action never completes. I end up pulling the plug and getting told off by the OS for not disconnecting the eGPU first. But I tried!

Thank you for sharing this nice build and the quiet mods! I agree with you the Disconnect process could use more refinement.

Thanks for this nice build.

One thing I never understood with Mantiz Venus is why it's loud in the first place. It was alway an big argument to not buy it. In my opinion that's saved at the wrong end. Same goes for other enclosures I had to test.
Of course, if there is some load/action that's ok if I hear something, but on idle working? No.

@OliverB - I agree with your comments about noise at low loads. No, indeed!

I had previously tried the AORUS/Gigabyte Gaming Box with RX 580, but it was *far* too loud and went straight back. I chose to replace it with the Mantiz Venus as the more standard components would make quiet modifications easier than with the Gaming Box. This was significantly more expensive once you include $200 for the RX 580 card I selected. Choosing the Manitz Venus over the Razer Core X was due to the the USB & ethernet ports - 1 cable to rule them all!

I was especially disappointed in the case fan in the Venus. The bearings already sounded bad out of the box. How much extra would it cost for Mantiz to fit a Noctua as standard and use this as key selling point? Given I was going for as quiet as possible I chose the Platinum SF600 PSU. Like the graphics card I selected, this PSU doesn't spin the fan at low loads. I think replacing the case fan had the bigger effect on the overall noise.

Of the three silent enclosures I had only one could used with different eGPUs (Asus XG Station) and his cannot be used with just one cable (not enough PD). That's a little bid sad. Aorus Gaming Box was very loud and Razer Core, too, even it was a little less noisy.

I you think that those are #1 and #2 in the publicity I am very surprised as I sent those noisy things directly back to the vendor.

I have a Core V1 and while I love it's looks the noise is a big turn off - that and the ports are next to useless as the connection often drops. Have you had any issues with the Mantiz ports with peripherals such as mice/keyboard/headphones are plugged into them?

I'm planning a new build this year and weighing up my options as silent is now a priority.

I'm using the Mantiz with the out-of-the-box firmware. There is a driver to install to enable the ethernet port, and I've done that on both of my laptops. I did some benchmarking early on to stress the GPU and test the USB connection at the same time - I didn't find any problem.

My main use of the eGPU is as a docking station so I can use the triple monitor setup for software development where the GPU load is small. I do listen to streaming music a lot, which uses both the ethernet port and a USB port on the Mantiz after round-tripping to the laptop through the TB3 connection. My keyboard & mouse are Logitech wireless devices connected though a single receiver.

If there were problems, I would think I would have noticed by now, but I'm happy to say that everything is working as expected.

@sunday-afternoon cheers for the info! Makes me wonder if it might be a good option for me, I like the idea of a single cable solution, currently I have 4 - eGPU, monitor, SSD and Keyboard because Windows is a dick about working with my Apple Keyboard. My Windows mouse uses a Dongle which I could plug in to the rear of this along with any other traditional USB cables. An internal SSD would also be nice...

Just a word of caution as I see you mention Windows - my experience is macOS only.

Here's some more info on the bandwidth question courtesy of Anandtech's review of what looks like a re-badged Mantiz Venus:  https://www.anandtech.com/show/13944/exploring-tb3-egfx-with-powercolor-gaming-station-rx-vega-56-nano/2