I wanna keep this as straight forward as possible. However, please understand that I might have to explain some details and thought processes of mine that might be helpful to make up some clues on why this exactly worked and how we can learn form this for the future. Like this, maybe all that time I wasted wasn't for nothing. First of all I wanna get something out there clearly:

Don't consider this setup if you primarily want to use Win 10 with it.

I's no secret that AMD eGPUs are hard to get running under Windows 10. However, especially this configuration being an iMac with only two TB3 ports and a fairly powerful dGPU means more harm than good.

macOS:
Since on macOS every AMD card works plug-n-play this one does no different.

It's was a nightmare. Success seems completely random. You need to achieve a weird combination of Windows Version and bootcampdriver.com driver. When I will be referring to "combinations" in this post I'm talking about Windows and Graphics drivers.

Let me tell you: I did at least 10 Windows reinstalls, tested several versions of the bootcampdriver.com recent optimized drivers and followed probably every single guide on here to overcome error 12.

That being said, I'm almost certain that there is probably a better "combination" that also works but I'm so glad that I actually am at this point right now that I won't dare touching it ever again.
The frustrating part is that I can't be sure if a driver failing for me when testing was a reproducible behavior or not. This means that the combination I found now to be working could just be a random success / that a combination I tested before could have potentially worked if I tried again. I fear this to be the case because most of the time when the drivers were installing it was a very close-run thing between the system muddle through or crashing sometimes corrupting the whole installation.

What I want to point out with this is that the "sweet spot" where everything is (suddenly) working stable is apparently extremely picky, resulting in your system either working perfectly fine (like I have achieved now) letting you question yourself and if all the hassle before actually happened or making your windows installation fully unusable. The worst is that I can't make out any aspects that separate this combination from others I have tried.

That being said, always create restore points when trying to figure out a better driver combination, maybe this one doesn't even work for you and you need to do so.

Stuff I tried (read this to understand, don't follow along yet)

Steps that got it working

However, once I got a blue screen on login screen. I already assumed something was going one since the login screen did appear on internal monitor on that boot rather than on the external. That's where it freezed and finally crashed. 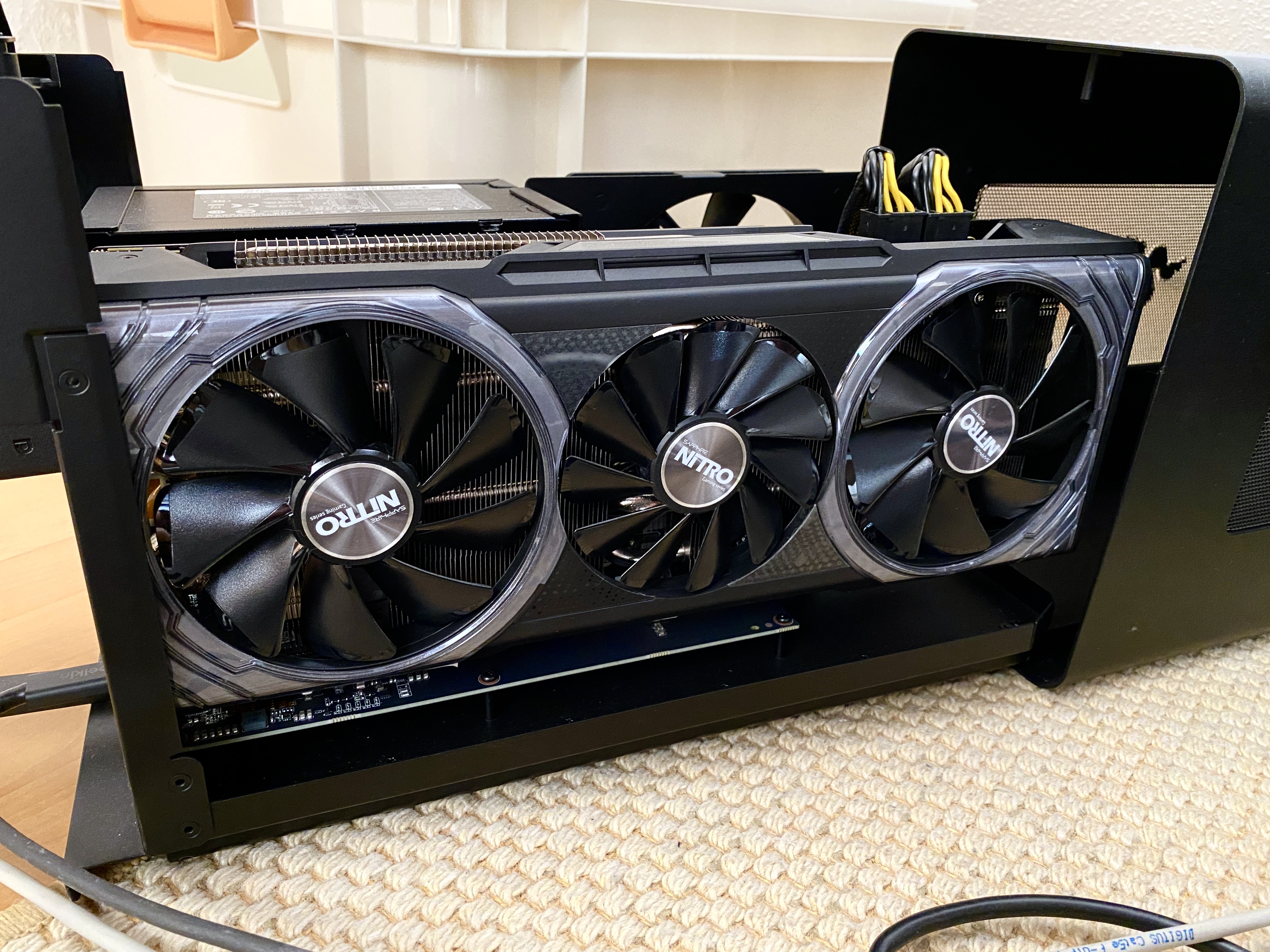 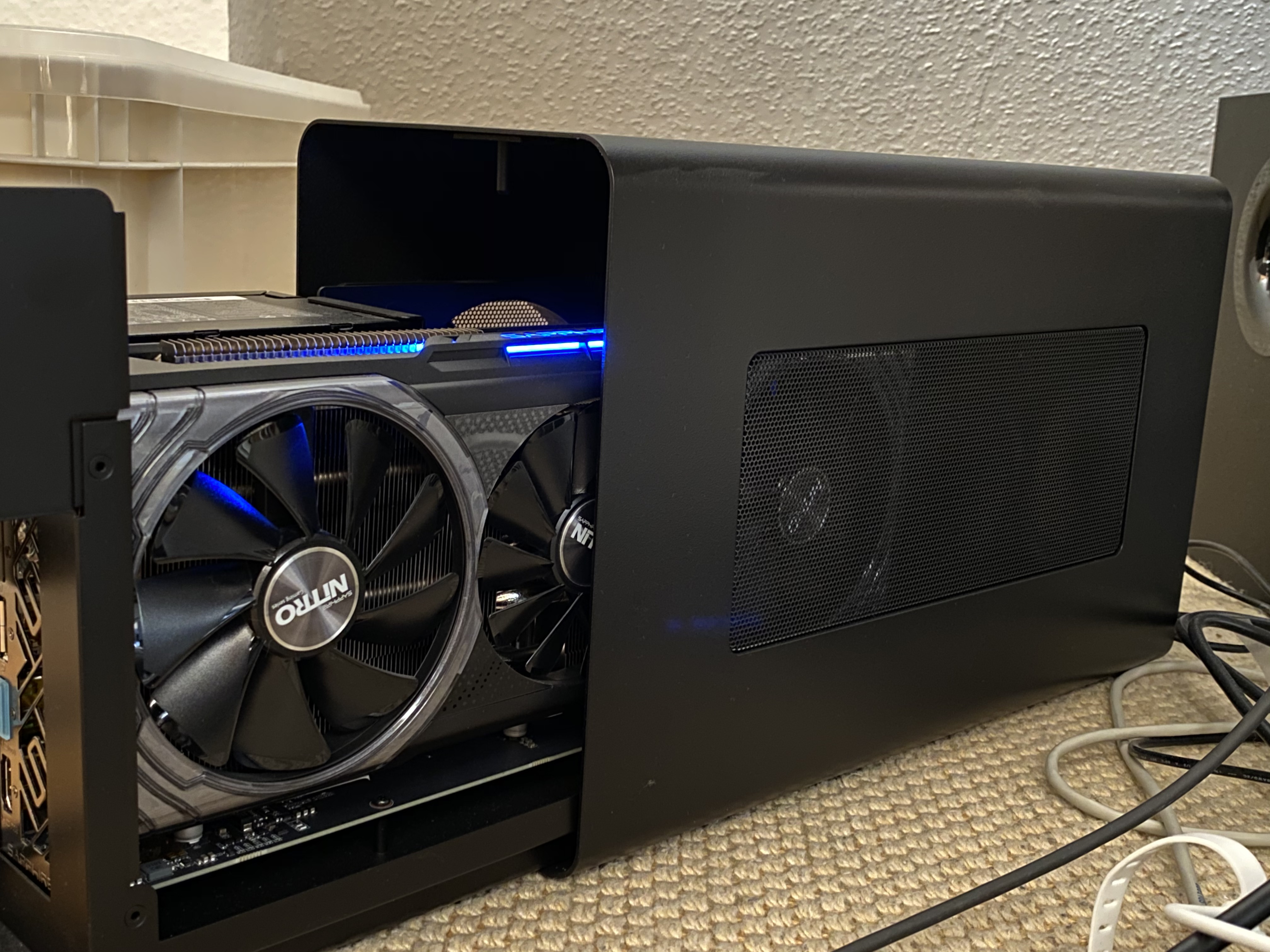 Like I mentioned multiple times, this took me a lot of time to figure out. So that it wasn't completely for nothing, I wanted to share my findings. Technically I'm really interested in which points you needed to follow to make it work for you. There are many question marks in my head right now and it would be awesome to see if the 18.2.2 also works on a newer windows version, if the "driverless" installation is really necessary, what bootcamp release also worked for you etc.

Please leave your thoughts below. Thanks for reading and I hope I have helped someone out there!

Thanks for this. I have been struggling with my 5700 for 2 days non-stop working on it now.

I've been using the latest insider build - everything is plug and play until it starts installing drivers; after which i get my internal screen going black and my eGPU screen going black. I can get into safe mode and DDU the drivers and boot back in, but allowing the drivers to install (or using the latest bootcampdrivers.com drivers) causes the same black screen issue. I'll try the version you reccomended and see if it resolves it.

But I think since the 2015 MBP is Thunderbolt 2 this is very hard to compare...

I followed all the steps exactly but before starting I installed build 1903v1 and then updated it to Windows Insider using the latest FAST RING build (slow ring did not work for me. I am on build 19608 released April 15th 2020). Using rEFInd to boot allows me to keep the Intel iGPU enabled. Do not connect to the internet yet! I did not install the standard Apple BootCamp Drivers package - instead, I went through the "WindowsSupport" folders and installed every non-GPU driver manually by clicking on each. Then I installed bootcampdrivers.com version Adrenalin 18.2.2 XG (Best for OC'ing) without any issues (put it on a USB with the official bootcamp drivers). After installing these, you should connect to the internet.

After connecting, the computer automatically installed the Intel Iris 5200 drivers along with many other driver updates. THE INTEL iGPU DRIVER IS WHAT BREAKS THE SETUP BUT LET IT FINISH INSTALLING ALL DRIVERS UPDATES! After these auto-installed, the internal screen would not work AT ALL.  On a reboot I would be able to use the eGPU with no issue on my external monitor, but the internal screen would remain frozen or black and i could not access it. To resolve this and restore the ability to use the internal screen; here is what I did:

Boot normally (cold-plug) using eGPU monitor as your only monitor. You won't be able to access the internal screen now. Perform the following edits:

Booting with no eGPU connected (desirable as well for me so i can easily use FORScan) enabled the internal screen using the Microsoft Basic Display Adapter. You wont get ANY internal screen settings, not even brightness or resolution by nature of the missing drivers, but the screen will work!

Thank you very much @dwalster for your well written and informative guide; I would not have been able to do this without it. I hope others find this useful as well. Anyone - Feel free to tag me in a reply and I'd be happy to follow up.

@gg_gg, I'm so glad this was able to help someone, thank you for sharing!

Thank you for the information regarding the insider build. When I find time in a few weeks I may also test it on my system.

It's a little pity though that you didn't try to get it working by normally installing the standard apple BootCamp Drivers package on the first try to check if it would also work like that, after uninstalling all graphics drivers that the apple installer put on the system at that point.

After installing these, you should connect to the internet.

After connecting, the computer automatically installed the Intel Iris 5200 drivers along with many other driver updates. THE INTEL iGPU DRIVER IS WHAT BREAKS THE SETUP

So If I understood you right, you could just have prevented this by disabling auto driver install before connecting to the internet, right? I was a little confused when reading your reply because you mentioned one "should connect to the internet" already.
Btw. there's a feature in DDU that lets you disable automatic driver installation:)

Further, did I get it right that you didn't have had to install the 5700's own driver manually? Did everything work already only after installing the 18.2.2 from bootcampdrivers? I personally had to manually install the Vega 64 drivers.

One last question: You mentioned that you installed the drivers in the WindowsSupport folder manually. As I stated in my post, there seems to have been a change in the last two weeks of how apple handles the driver installation. If I download the most recent "WindowsSupport" folder via Bootcamp, all the files in "Broadcom", "Asix" etc. are not executable anymore. Luckily, I saved an old "WindowsSupport" instance where in every folder lay scripts you can manually execute, like you described.
So either that "update" doesn't apply to the old MacBooks or the MacBook line in general or it's something else. Would be very interesting to know.

Thats it, thank you and stay safe!

hi I have a Core X + Asus Radeon vega 64 + a MacBook Pro 15 2019 and when I connect core X to the computer with Thunderbolt 3 it tells me that I have no video card to deactivate,
I tried several ways to fix this from both macOS and Window with bootcamp but most of them worked ....
What should I do to connect the video card inside core X to the computer? thx!