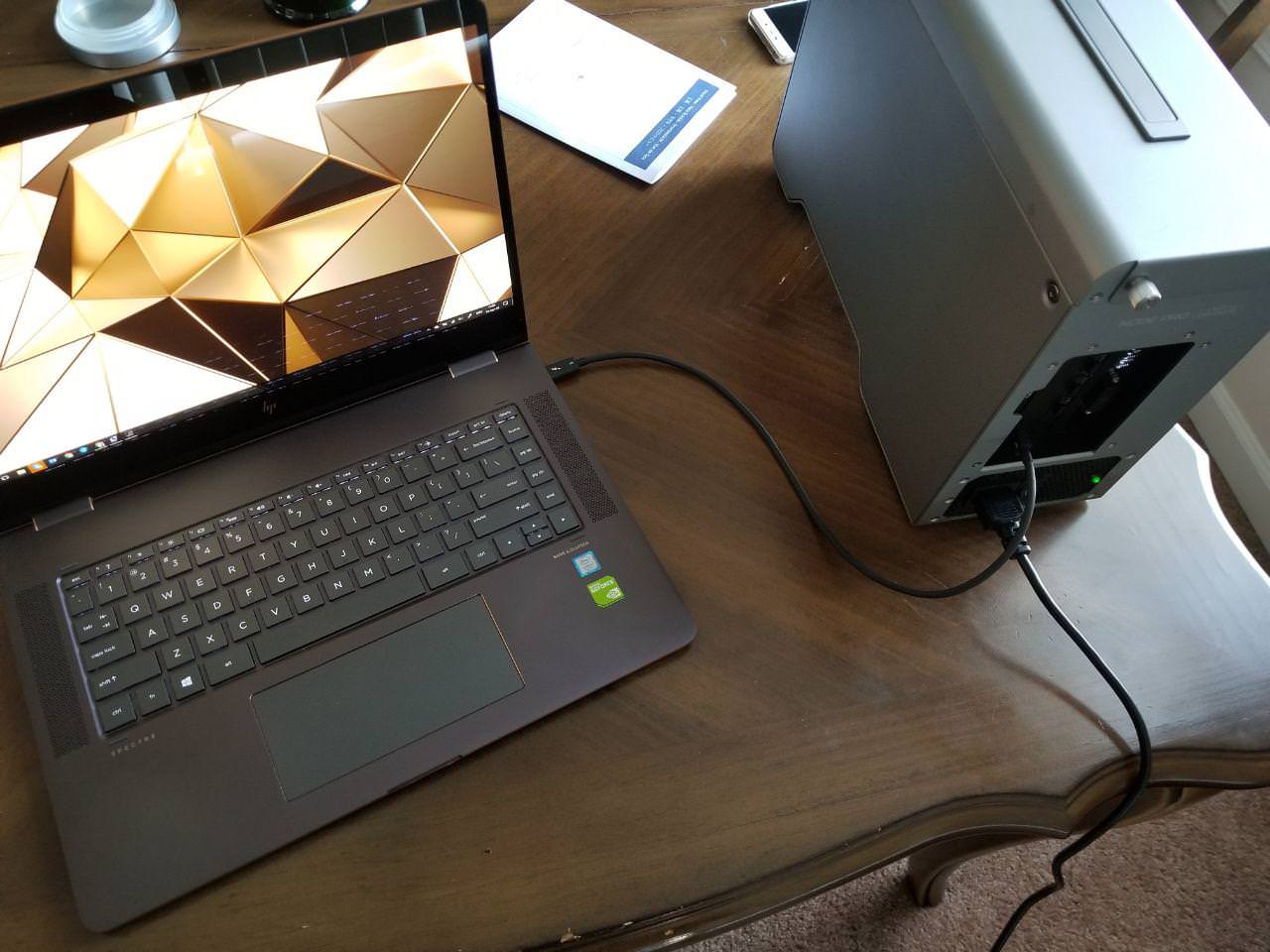 Installation steps:
System didn't detect anything when I plugged eGPU into corner TB3 I use for charging usually, but external case was recognized automatically when I tried the other port. OS always used dGPU on internal display even if I turned it off, so after half a day of tinkering, I decided to get 2018 Spring Creators Update (1803). After all the setting changes and tweaks I tried to get the setup working, I'm not really sure that OS update did the trick, but now when dGPU is offline - all games run on eGPU.

Comments:
All this was done to get a decent gaming setup on my computer, I mainly use for IDEs (so CPU, RAM and SSD were main points when choosing it). Standard gaming laptops at the moment were either too bulky and fancy for office use, or at $4k price, so I decided to get a "hotel" gaming setup and still have a "business looking" laptop. Previously I was able to run Deus Ex: Mankind Divided only on lowest settings and at 1920x1080 on 20FPS, now it runs at ~45FPS at ultra and 1920x1080 (either I'm missing something, or the game is not that optimized). Divinity: Original Sin 2 keeps 40-50FPS occasionally going down to 30 at ultra settings on 4k. I'm pretty happy with the result, considering I still can use GPU in my home desktop if I want to. I can't currently compare desktop performance to an eGPU one.

UPD: Only 2 free PCIe lanes are free for TB3, so bandwidth is limited here, thx @nando4

UPD2: A bit more about setup experience. As it turned out - for games to run at eGPU it was needed to disable dGPU and then reboot laptop. Also, almost every icon disappears from taskbar after I close games at resolutions, other than 4k. My theory is they are somewhat "left" on eGPU screen or render (this may be a bunch of baloney), as I see nVidia tray icon with GPUs status disappear, though its service still runs.
Talking about AkiTio Node PRO, it was smaller, than I expected. It's close in width x length to my laptop and not so wide - depth-dimension speaking (about as 1080Ti is in width). Really convenient handle to carry it around to colleagues' rooms for LAN parties. To my mind, only Aorus could best this case, and only in terms of size. Really satisfied with this choice

Two updates:
1. Corner port seems to be not a TB3, though I'm not sure how I can figure that out through system properties.
2. Seems like my bandwidth is way lower that it should be. I'll try to work something out with TB3 settings and drivers.

Oh that's right. I didn't pay attention to that in guides, shame on me. Well, it's a bummer you can squeeze out more on a smaller screen, but still this setup is enough for pretty much anything. Thanks for the info!

Hey there, it has been a while since you have those set up. How's everything going? Are you satisfied with the set up? Both performance wise and user experience wise. Also, do you only use one Tb port for both video and charging or one for video and one for charging? I have the same laptop and are thinking about buying this enclosure for my extra 970. It will be awesome if I can hear some feedback from you! Thanks.

Hello, I just stumbled on this post as I'm looking to buy an eGPU. We have the same HP but I was thinking about buying the Aorus Gaming Box with the GTX 1080. Of course, you have a different card so I wouldn't expect you to know all the details but I have some general questions about using an eGPU with our Spectre.

How is the bottle-necking, do you think the performance is bearable or is there any way to try to improve the limited bandwidth available with our model?

Did you have any connection/compatibility issues now that you've used it more?

Finally, do you find adding an eGPU to be worth the money?

I really appreciate you taking the time to post all of this information on the forum and I look forward to your reply. I have about a month until I move back to the United States and since this technology isn't currently available in Ecuador I've got some time to think about it.

Hey there, it has been a while since you have those set up. How's everything going? Are you satisfied with the set up? Both performance wise and user experience wise. Also, do you only use one Tb port for both video and charging or one for video and one for charging? I have the same laptop and are thinking about buying this enclosure for my extra 970. It will be awesome if I can hear some feedback from you! Thanks.

Hi there, sorry for long wait, seems like I've missed notification from this thread. To generalize the experience:
1) GPU Driver update is a beach, not to swear here. Maybe it was just a case of one version of drivers, but I try not to update GPU drivers unless absolutely necessary, too many BSODs after reboot, when eGPU is connected.
2) Perfomance - way better than dGPU for sure. To give an example - Witcher 3 on minimal settings and 1920x1080 resolution warms up my room and really tries  to go 30FPS, though sometimes falling to 4 (that may be due to all services I have installed in system). With eGPU - it runs pretty smooth on ultra settings, though I prefer playing it on 1920x1080 still, due to smoother performance and not really big change on laptop screen.
3) User experience - only problem I can come up with is short power cable

Other than that - great cooling, pretty small (can use as a laptop stand even) and enough ports for me (I only use external SSD in that configuration). And I use one port for charging and video as I don't see why would I need second power source.

@chris_w , performance compared to desktop PC is obviously worse, specifically - sometimes frame count is just dropping for several seconds. But it's not bad. Like ultra-settings-witcher3-fhd not bad. I don't think there's any way to resolve bottleneck without tampering with motherboard architecture and wiring. I haven't read much about makeshift connectors, but I think it'll take hell of a rewiring to connect eGPU with a wider bandwidth available.
As I mentioned in previous paragraph - only issue I have with this enclosing is GPU driver update, but I don't think it's model specific, looks more like a general issue with eGPU technology not being that wide spoken still, so GPU fabricators are not that focused on improving general stability.
Speaking about money - totally worth it, no "but's" here. I use this GPU in my home PC when I'm there and take it with me on trips and such. So even if I swap this laptop for something else - I still have the GPU and the case will be compatible with any other model later. I do still compare it with Aorus sometimes, as I may have been able to carry it in my backpack and not in a separate carry-on at the airports. Though it's nice that my 40L backpack with a laptop is considered a "personal item", so I really don't need a baggage place, having a carry-on