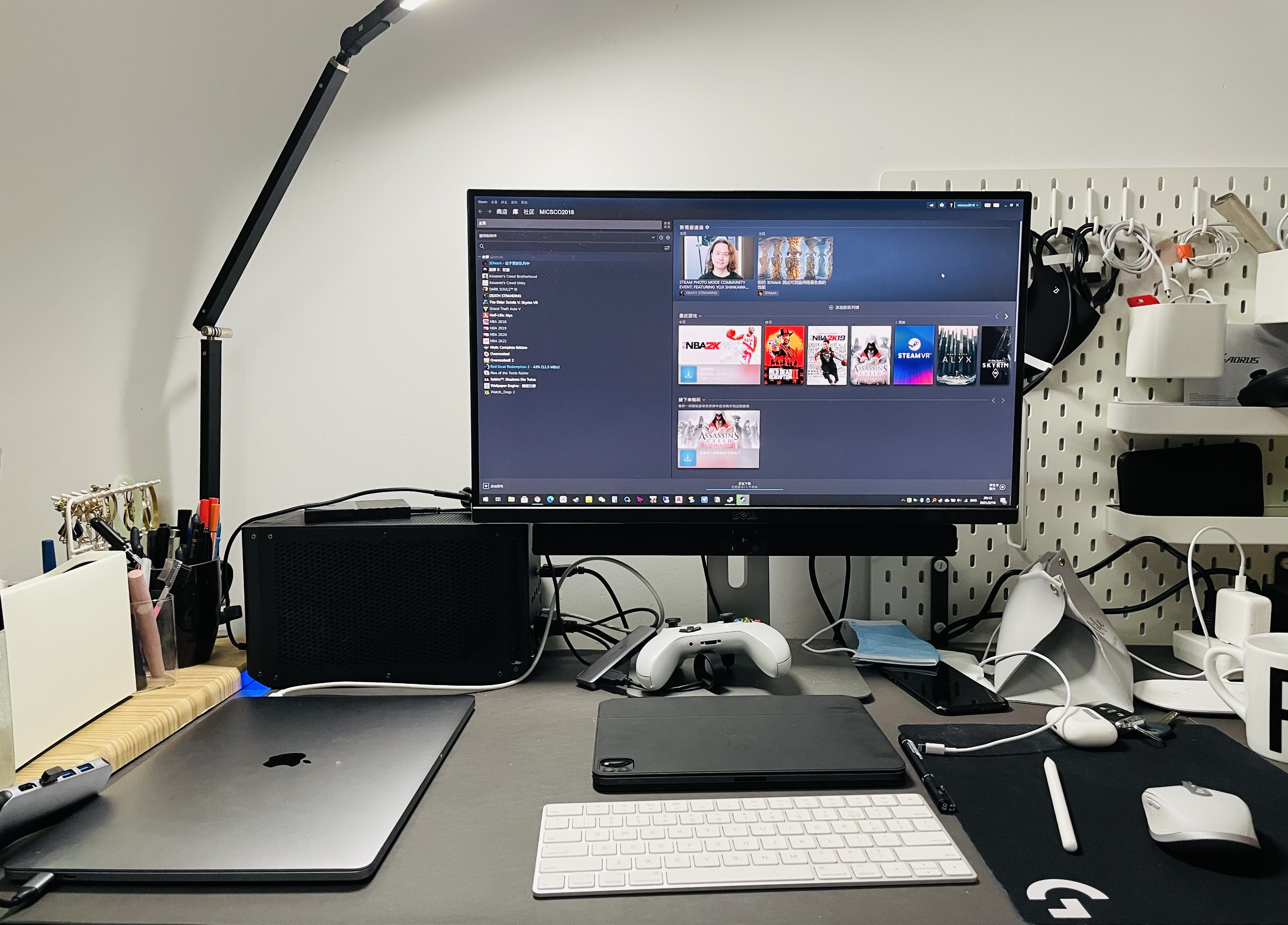 I started playing around egpu in 2018 when I bought my first enclosure - AORUS Gaming Box with GTX 1080. It was great to see such a great bump in gaming performance for MacBook, and it become my favorite hardware. The 1080 Gaming box is smaller and very easy to carry around. A few days ago I upgrade the enclosure to the latest RTX 3080 gaming box. 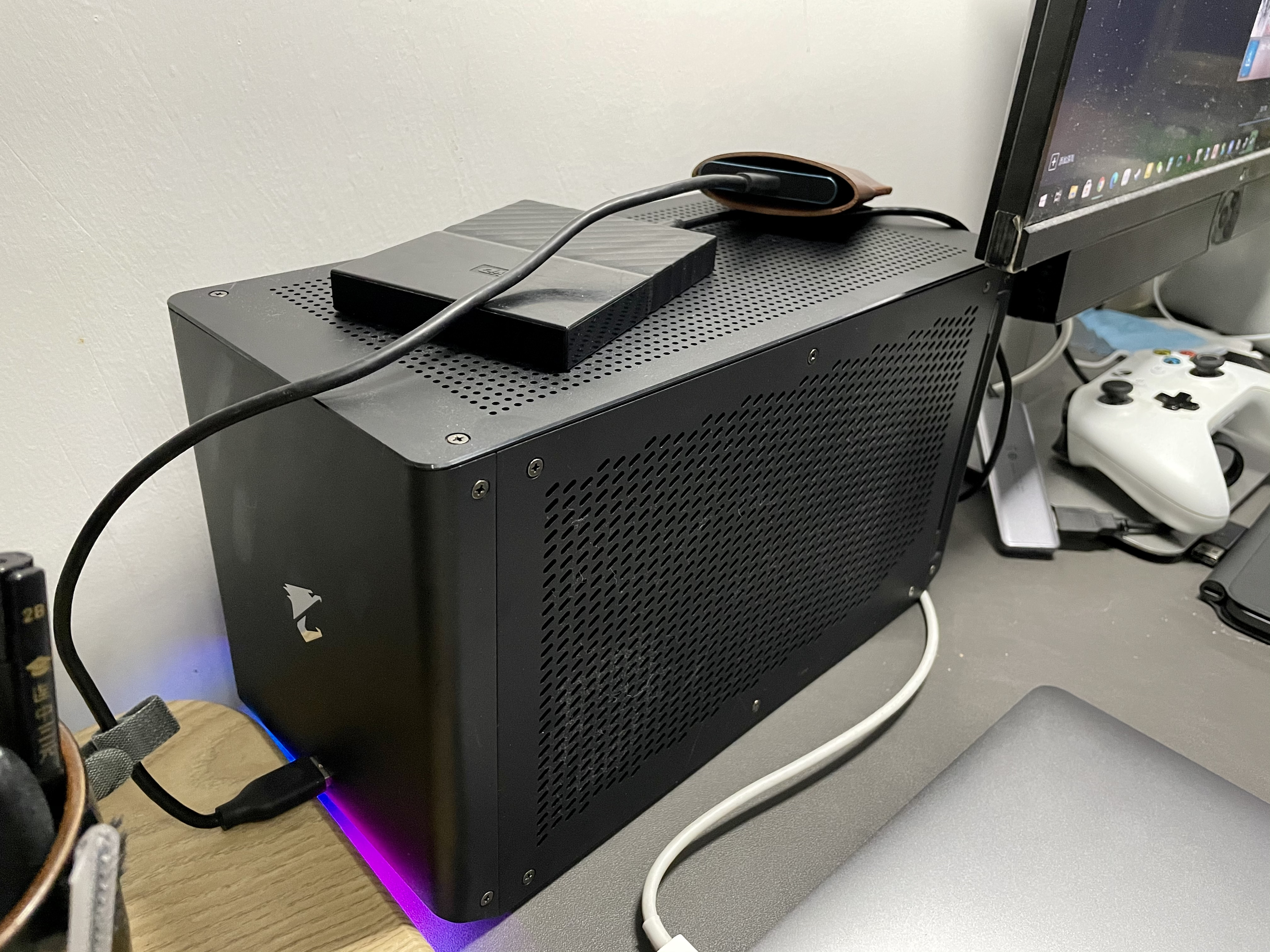 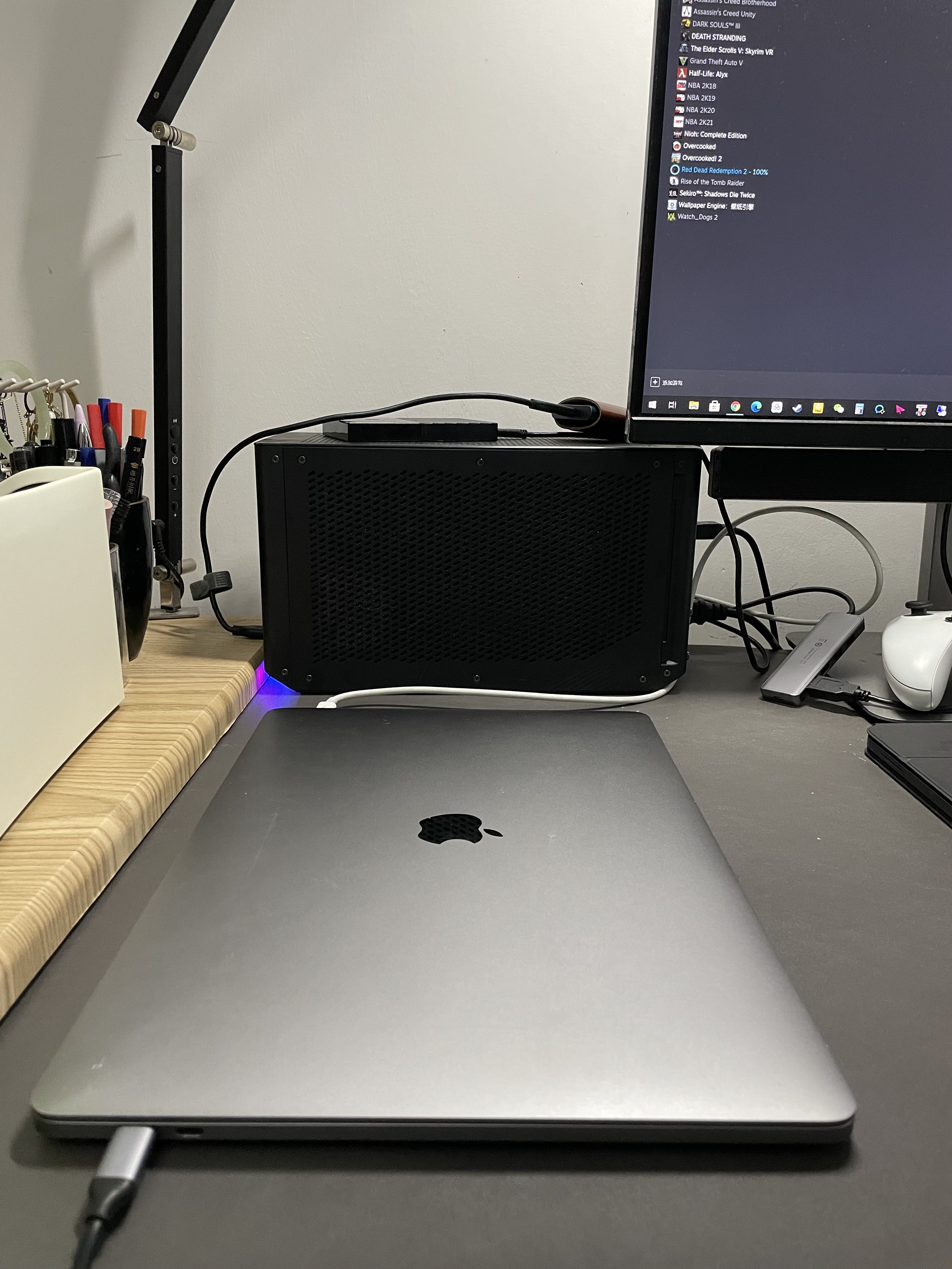 I used the 1080 aorus gaming box before and that was a very simple plug-and-play. I mean, any time, booting with the egpu plugged/plug in while choosing the system/plug in when windows logo on the screen/plug in after logging into the system. It all worked. There were some occasions when I reinstall the system and then the egpu cannot be recognized immediately. Usually it only take a while and then it come back to normal.

I thought 3080 Box should be the same, but it somehow turned out different.

When booting with the egpu plugged, or when choosing the system, or during windows logo on the screen, it has around 60% chance running into BSOD, and the egpu fan goes to full speed and making a lot of noise. For plugging after the system is fully loaded, the BSOD chance dropped a little bit, but still exist.

The benchmarks are normal compared to the previous 3080 builds on the forum. The cpu maybe a small bottleneck for the egpu. The fps for Red Dead Redemption 2 is around 45-50. Timespy benchmark is around 10000-11000 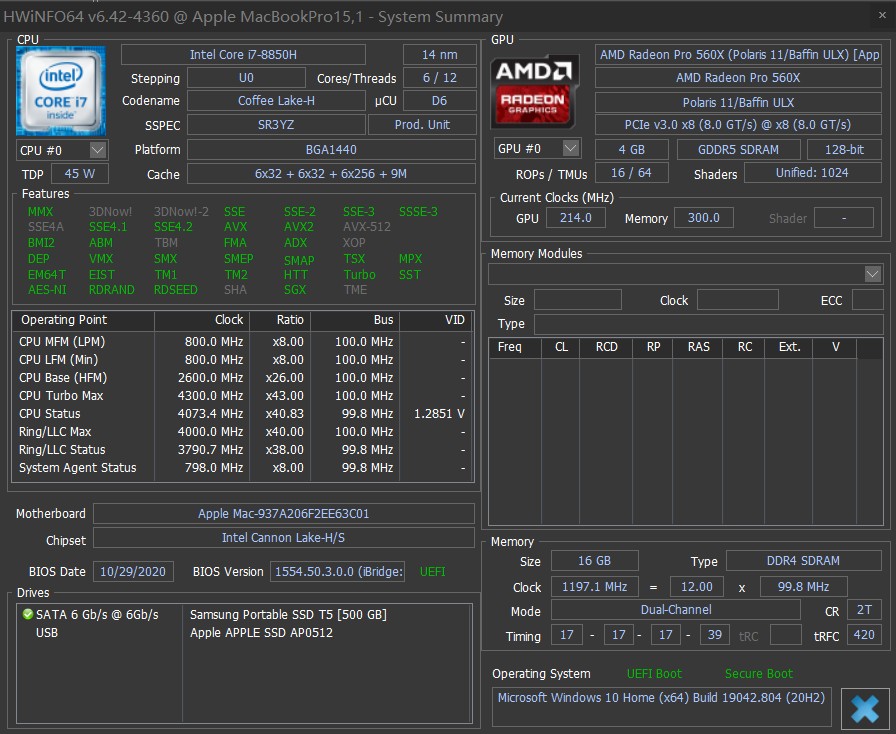 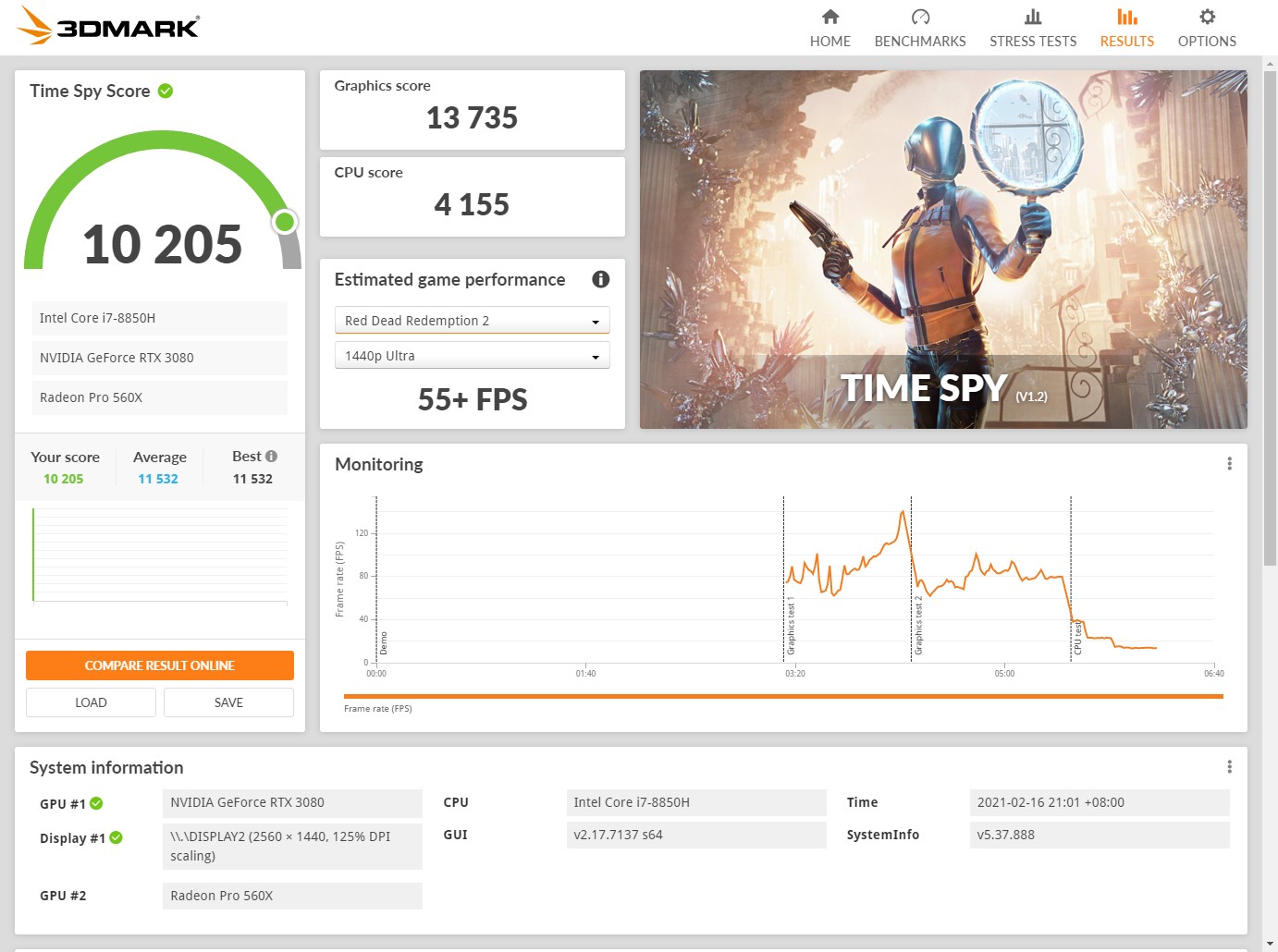 I'm already pretty satisfied with the AORUS Gaming box. The only annoying issue is the BSOD problem (Hope someone can help me with that). I learned a lot from this forum and I'm very happy to post my first build after such a long time of lurking.

@micsco2018, Thank you for sharing this build. Regarding the CPU bottleneck, it may be due to cooling system. Have you observed short boost or overall thermal throttling in Boot Camp? One recommendation I have is to run the laptop with the lid open. Ventilation may work better that way through the display hinge area and top case surface. You can also try disabling the dGPU in Device Manager if you have no need for it in Windows. For reference, my very similar build with the RTX 3080 Gaming Box and Samsung T5 500GB could extract a bit more performance [build link].

Cold boot and BSOD issues with the eGPU is hard to determine from one set of hardware pairing to the next. How did you install the Nvidia drivers with RTX 3080? Do you have GeForce Experience running? If you didn't use DDU when switching from GTX 1080 over the RTX 3080 Gaming Box, I'd recommend doing that then manually download and install the latest Nvidia drivers without GeForce Experience.

@itsage, Thanks for the advice. They are very helpful.

By mentioning the CPU bottleneck, I'm just guessing that 11-gen CPU with thunderbolt 4 support could release more power of the egpu, which can allocate the bandwith better.

I didn't use DDU when switching the box but when I installed the new driver, I selected 'clean installation'. And yes, I use geforce experiencce 😛 . I'll do a clean drvier reinstall using DDU. But, should I uninstall both the nvidia and radeon drivers or only the nvidia one? I still need the MacBook to do its mobile jobs so I think it would be better to keep the dgpu driver right?

Thanks again for the advice.

@micsco2018, If you use the dGPU for other tasks, definitely keep the Radeon drivers intact. Only remove Nvidia drivers with DDU.