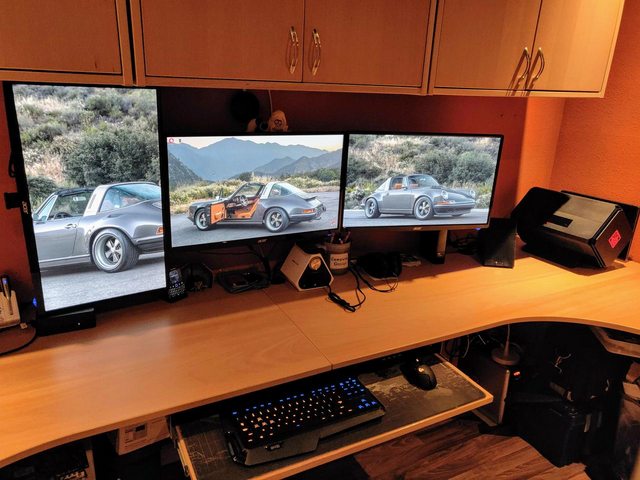 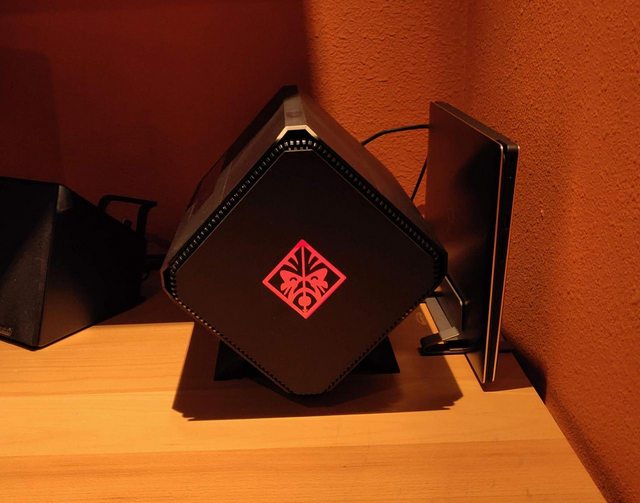 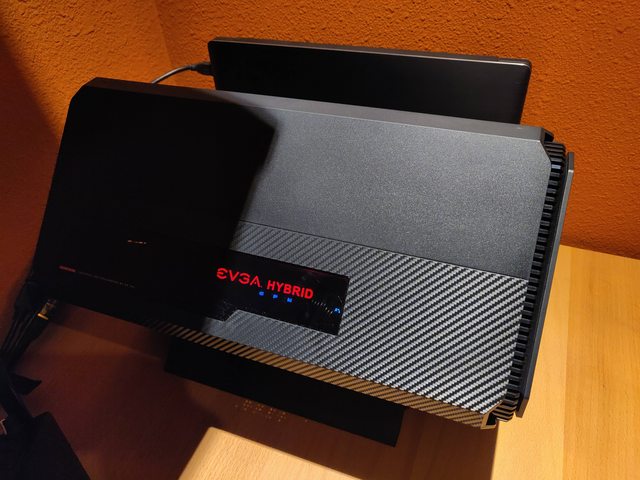 Hardware
Where do I begin...
After the initial setup with my older Gigabyte 1080 (non ti) I knew right away the stock PSU had to go. The fan was too noisy for what it was plus it had no power switch. Which meant it was on ALL THE TIME. I read up on a replacement and found out I needed at smaller sized PSU at 140mm or smaller. I had a NiS Cooler Master v750 80+ Gold, fully modular PSU which just happened to be the right size. I lucked out!

I've had this PSU for over a year, as it was a warranty replacement, and I was going to use it in my next "Build". Well, this was the perfect time to use it! So, I took apart the OMEN and replaced it and it was dead silent during normal usage. I had to leave the back off for the time being because the hole for the power cable was in the wrong spot. No biggie for now. It was the Laptop fan that was next on the list to resolve.

First thing I did was turn off hypertheading in the BIOS. Next, I used ThrottleStop to setup a couple of profiles. One for normal use and one for gaming. For normal use I set the multiplier to 16, down from 48, turned on Power Saver and undervolted by 100mV. For gaming, I left everything at default. Now, unless I was gaming, it was REALLY silent. Finally I needed a way to turn it on without having to open the lid. The BIOS had a setting for boot up when power is detected. I enabled it and it works as intended.

Then came the idea of upgrading the video card. I was looking at 2080 non-ti cards and I just couldn't see spending that much over a used 1080 ti for a couple hundred less. My friend had an EVGA GeForce GTX 1080 Ti FTW3 HYBRID for sale at a very good price and I bought it after I figured I could fit everything inside the OMEN. After a couple of hours of trying one way and another and another, etc. I finally figured out how to get everything in and still have it look clean and function properly but I knew it was going to take some extra steps. 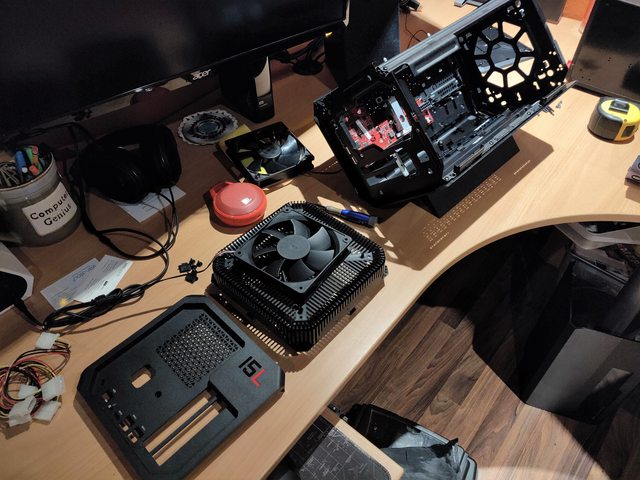 I wanted better air flow to maximize the radiator. I removed the front fan and felt that left enough room up front for the hot radiator air to exhaust. I added some speaker tape to the front of the radiator so I wouldn't get metal on metal noise from vibrations. 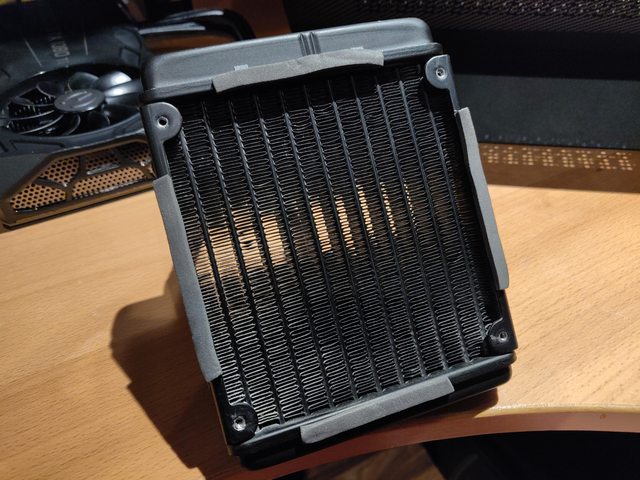 I then mounted the radiator to the inside front after drilling holes for the screws to pass through. 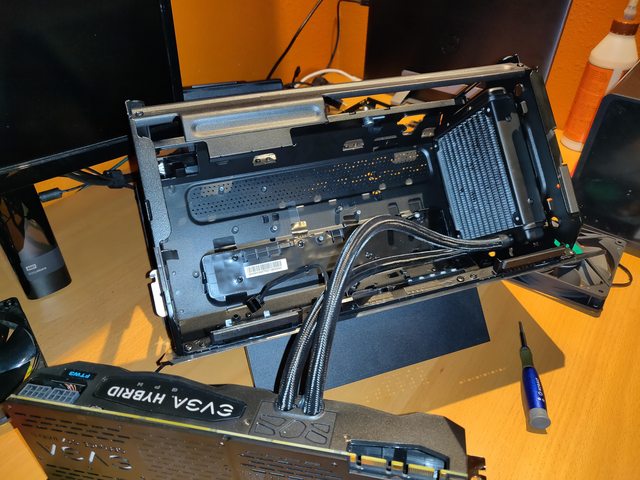 I didn't have proper length screws, so I used spacers from a TV mount. Looks odd with the front case off but you can't see it when the front is mounted. 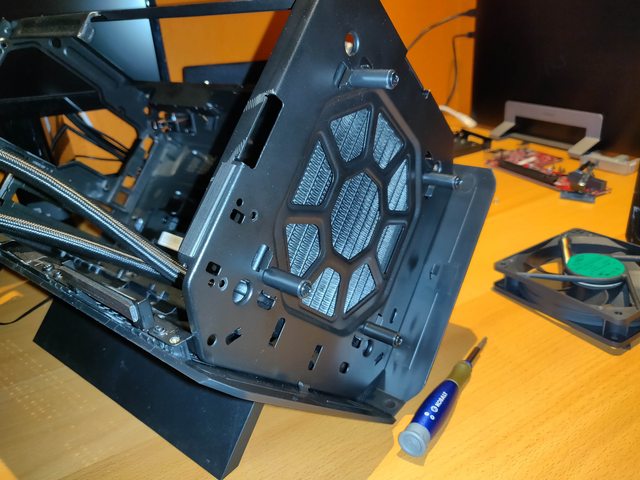 I then realized a normal 25mm thick fan was not going to fit between the radiator and GPU card. I ordered a 120mm x 15mm Noctua NF-A12x15 PWM, 4-Pin Premium Quiet Slim Fan. I ordered the 4-pin model so I could mod the original proprietary fan cable to use this one while keeping it plugged into the mother board. That way the variable fan speed would still work like the original fan and be controlled by the OMEN as well as have the option of swapping out fans if I wanted to later down the road.

I cut the original fan off the stock wire and stripped them. 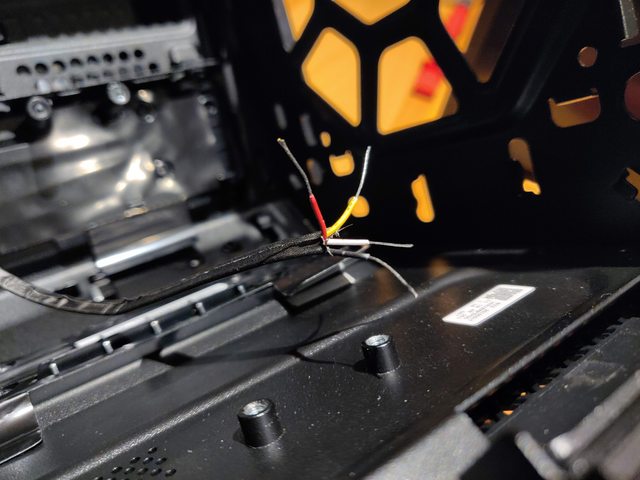 Next, I took one of the extension fan cables, which came with the Noctua, and cut the end off and stripped those wires 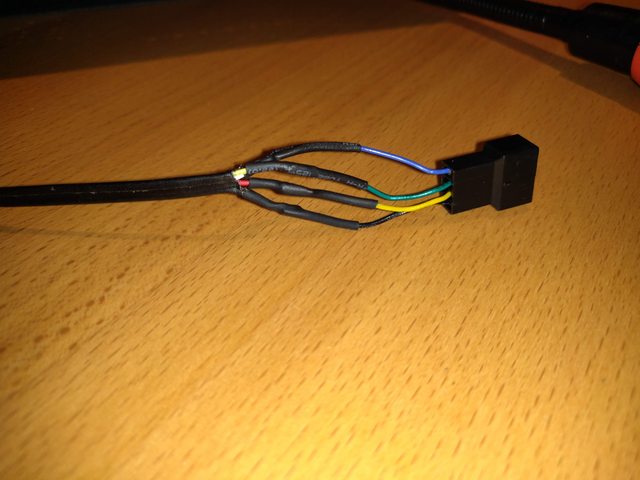 Finally, I spliced the wires together with the OMEN fan wires and used heat shrink to keep it all clean. 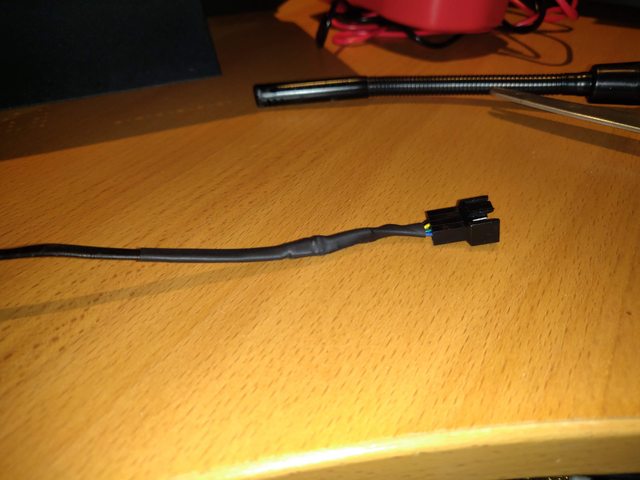 And here is the fan mounted. 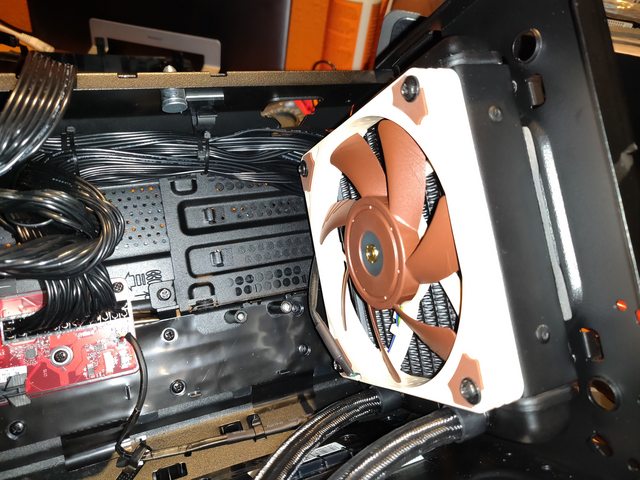 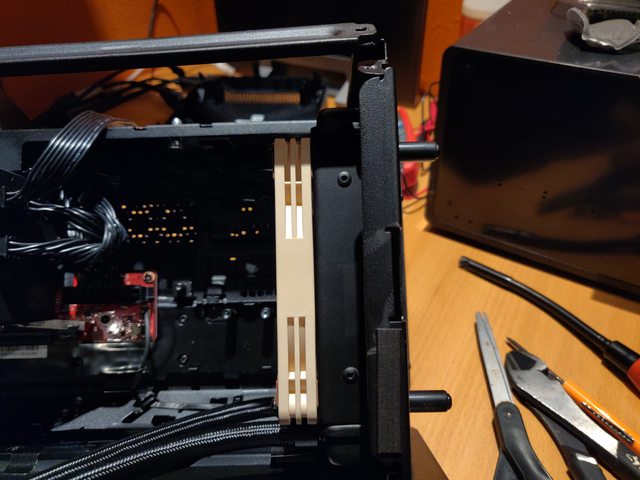 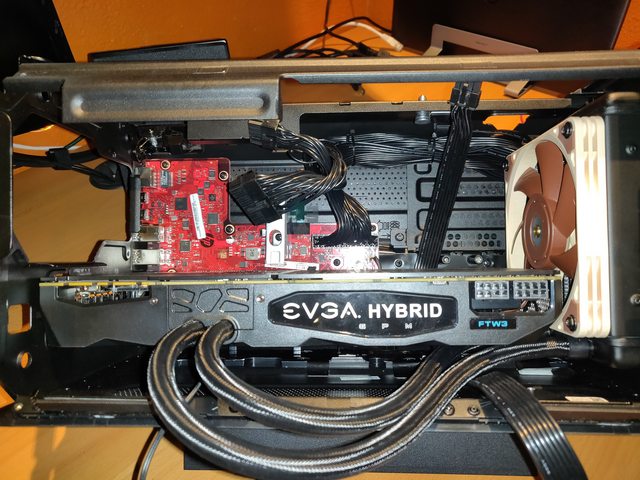 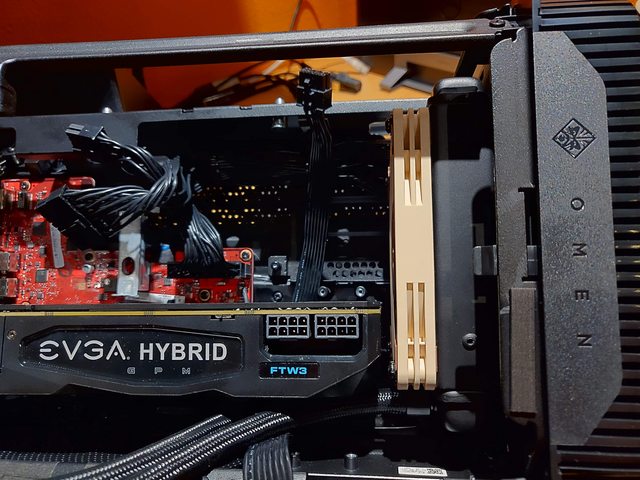 back in with the PSU. I cleaned up the cables and then my attention went toward the back cover. 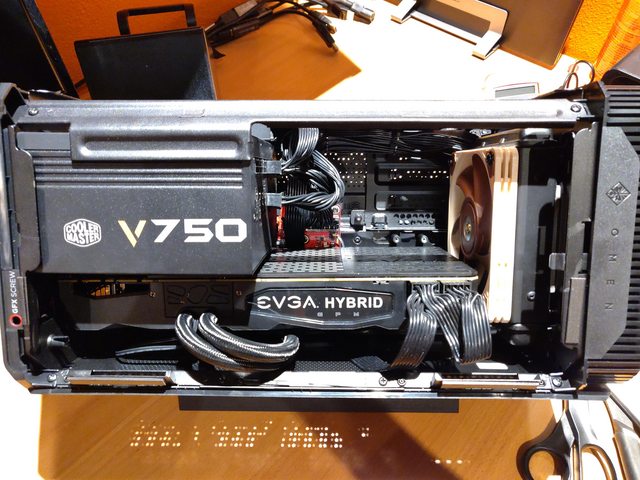 It was just a matter of using a dremel to make the hole bigger for the power cord and switch. Not my finest work, but I'll clean it up another time. 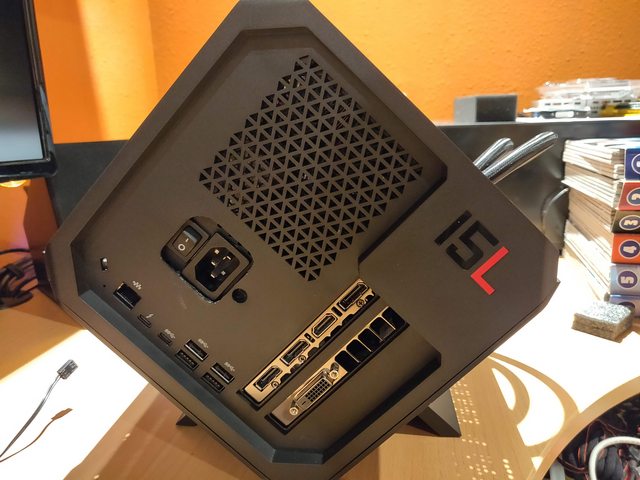 Benchmarks
Will post more later, but this is what I have so far. 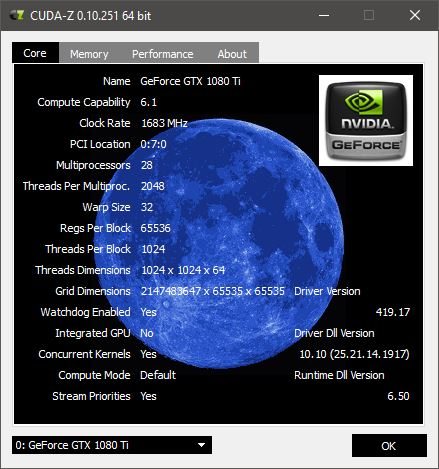 Temps while browsing and watching YouTube on second screen. 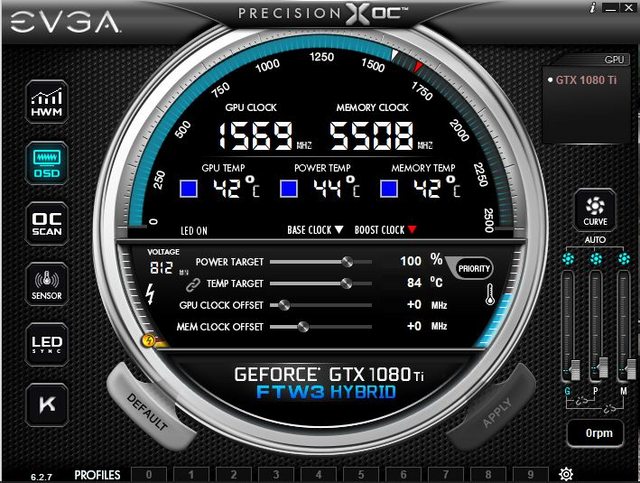 And Valley results and temps after 5 consecutive runs. 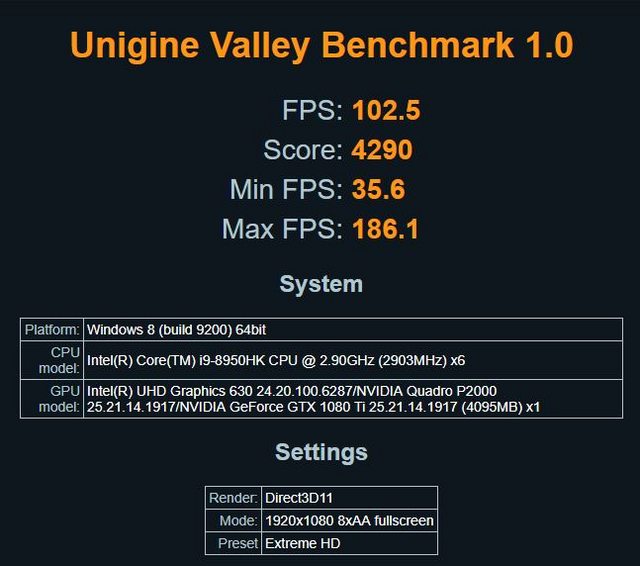 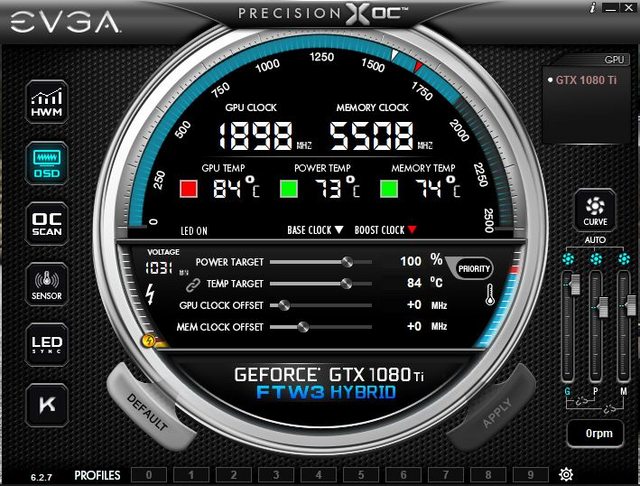 Let me know what you think!

Hmm. I'll need to dig deeper and come back with results.

So, I went through all the builds on this site with a 1080ti and none are showing anything above 4500 on the Valley benchmark. Can you show me what you're doing to get the higher numbers?

So, I went through all the builds on this site with a 1080ti and none are showing anything above 4500 on the Valley benchmark. Can you show me what you're doing to get the higher numbers?

Here are some of mine:

I do nothing special, because If I did some undervolting this would be the result:

This is my 1080Ti Build, unfortunately once  I overwrote my opening post :/

The only thing I actually do, is having a really good eGPU with the EVGA GTX 1080 Ti SC2.
But you, dear defiler (Lol), you have the big brother of it, which is anything but slower.

Could it be because you're using a MBP and not a PC? I wouldn't think that's the issue though. I just don't see where the bottleneck is currently. Any advice would be appreciated.

@defiler The Thunderbolt 3 routing makes a difference. While your Precision 5530 has four PCIe lanes to the Thunderbolt 3 port, this traffic goes through the PCH prior to the CPU. It's a shared connection with other PCIe peripherals such as NVMe drive. There are only a handful of laptops that have direct TB3 to CPU and the 15" MacBook Pro is one of them.

With that said, the low performance you're experiencing is likely due to PCH overheating. The Precision 5530 shares similar construction with XPS 9750 and my guess is there's no cooling for the PCH chip. In this XPS 9750 + GTX 1080 Ti build I observed huge fluctuations in eGPU performance. I didn't have enough time and cooling materials to do it properly but you can see a thermal pad helps.

BTW very nice build and making the hybrid cooler fit is a task in the OMEN Accelerator. Can you also add another fan in the stock location so that it becomes push and pull for the radiator?

Excellent! This is the type of in-depth info only a site like this can provide. Time to crack open the 5530 and take a look and post pics as well for you guys.

And thanks for the props on the setup. I'm still tweaking to try and get better cooling. It's a never ending battle.

Well, you were correct. The PCH does not have any aid with being cooled. 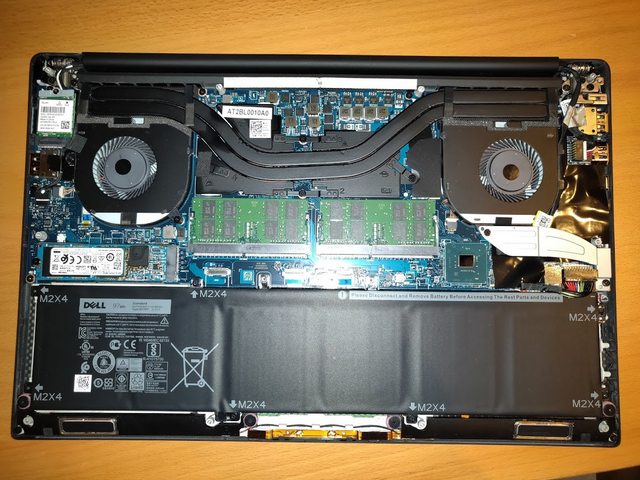 I ran Valley again watching the temps and they never got above 69 deg., but maybe that was enough to engage throttling. I'm going to order some thermal pads to see if that helps and report back.

@itsage, besides the PCH, do you think proper cooling of the TB3 controller chip on both the laptop mainboard as well as the TB3 board in the EGPU enclosure can also provide similar benefits with regard to improved performance from better thermals and less throttling?

On your provided link (XPS 9570 + 1080ti build), I noticed that further down, you provided a photo showing that the XPS 9370 also had some sort of cooling for the TB3 controller chip soldered on its motherboard. I have an XPS 9570 and plan on performing the PCH cooling modification. However, if you can help me identify where the TB3 controller chip is on the XPS 9570's mainboard and the Razer Core X's TB3 board, provided that there is space, I am happy to try it out and report if there are any measurable improvements to performance.

Not sure about the core x, but the 9570's PCH chip is highlighted in the orange square.