I haven't been much of a PC guy.  I've always preferred console gaming, I've historically been more comfortable with a controller, sitting on the couch, playing games on my 65" tv.  With my current job I am free to either work from home, or go to the office.  Until now I've chosen to work in the office most of the time, and only work from home when I need to be home (repair man, waiting on a delivery, etc.).  I've been making this choice because I haven't had a work space at home.  My desk at the office has a docking station and two external 16:10 monitors, and working from home meant sitting at the kitchen table working from my laptop.

Recent events have forced me to work from home, which in turn forced me to expedite my plans to turn our spare bedroom/junk room into an office.  This snowballed into wanting my own machine so I can dip my toes into the world of PC gaming.  The snowball kept growing, not only did I want my own gaming machine, I also wanted my own laptop so I can stop using my work machine for personal things at home.  This led to a purpose built eGPU setup you see here.  Just enough to see if I like PC gaming without the full PC gaming rig, and I still have a laptop to use while sitting on the couch with the wife. 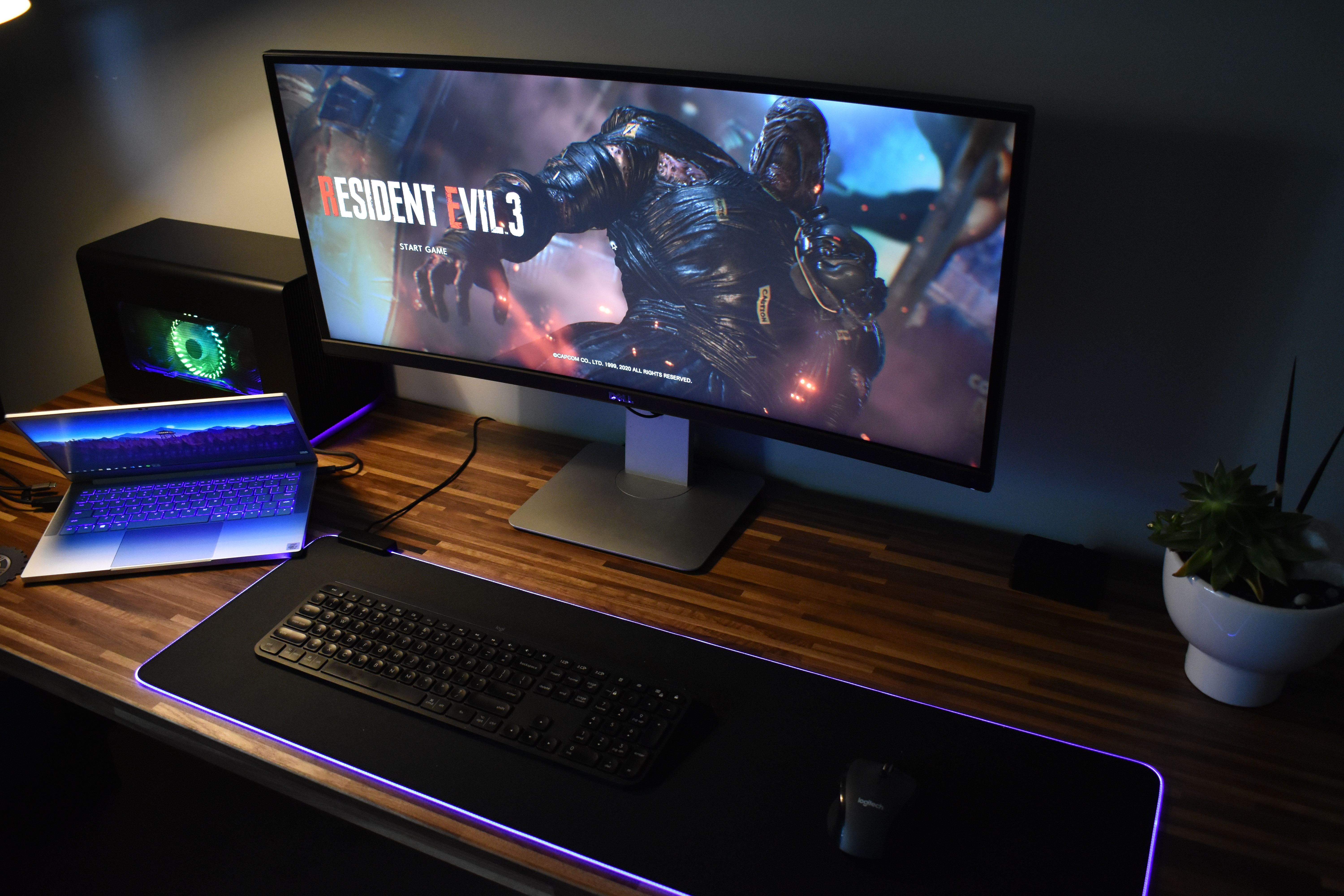 I did a lot of research for this build.  I wanted the best possible 13" laptop for an eGPU, so I decided on an Ice Lake machine due to the "direct TB3 connection to the processor".  Now, admittedly I don't know exactly how that compares to other alternatives, but it sounded like a good start.  At this point I was trying to decide between the XPS 13 9300, or the Razer Blade Stealth.  More research led me to the 25W processor in the Stealth, and an open box deal at Best Buy, and it was all she wrote.

The enclosure was the next choice.  I was highly debating the Node Duo so I could make use of the second slot for an external SSD.  I thought this would be a safe choice so I didn't ruin any warranty by upgrading the tiny SSD that came with this machine.  After reaching out to Razer, it appears that I actually don't need to worry about voiding my warranty.  SSD upgrades are just fine.  After I made the decision to start looking for a full size enclosure and full size cards, the Core X Chroma became my main choice due to 100% support with my machine, generous size for beefy GPUs, built in USB hub (If I even use it), and RGB goodness.

Laptop, check.  Enclosure, check.  Time to research GPUs.  This was the hardest part for me since I have never had a PC, didn't know much about GPUs, and didn't know how to compare them.  I started looking at benchmarks, but it didn't really help much as I only wanted to know one thing:  Will it game at 3440x1440 with at least 60fps.  I had no clue how to compare scores and benchmarks to real world performance, so I decided to just skip all of that and go for the best that I could afford.  The RTX 2080 Super quickly became the card I wanted, until the wife caught on to what I was planning and asked if she would be able to use it for video editing on her MacBook.  A bit of research later ruined my plans for the Nvidia card because of driver support with Apple.  So, after a quick poll on these forums, I started shopping for a good RX 5700 XT card and landed on the ASRock Taichi.  Luckily, this card was almost half the price of the 2080 Super I was going to buy haha.

I was a little worried when ordering the card, as its dimensions were right at the limit of what the Core X Chroma could handle.  Once they both arrived, I nervously placed the card into the slot and slid the enclosure back together, everything fit just fine!  The bonus of having such a large GPU, the three fans are nearly perfectly centered in the window on the side of the enclosure.  OCD rejoice!

I made the mistake of trying to download and install drivers before the GPU came in to reduce setup time.  ASRock's driver installer did not like this at all.  Once I had it all connected to my computer I had to remove the driver, reinstall, and two reboots later I had it going smoothly on my external monitor.

I really wanted the "single cable dream", which is one reason I decided on the Core X Chroma due to the built in USB hub.  My Dell U3415W also has a built in hub, so at first it was simple for me to use the USB out from the monitor and connect it to a USB port on the Core X Chroma.  This didn't work at all.  Mouse pointer lag on the external monitor was insane.  For now I am living the "two cable reality" until I decide to test my peripherals connected directly to the Core X Chroma.

I know I talked about not understanding benchmarks earlier, but it seems to be a popular request on this forum for the guys that do understand them.  For now I have Unigine Valley and AIDA64 Extreme installed.  I couldn't figure out how to use AIDA64 to display useful information, so here is the Unigine Valley benchmark results:

For the guys like me that would rather see real world results, here is some playtime through RE3 with the graphics set to "Graphics Priority" and I believe VSync enabled (wait for refresh).

I will be more than willing to provide more data or benchmarks to those that ask, and also help me provide what you are asking for haha.  I'm not that savvy with PC stuff.  One thing I'd love to see is if my processor is actually utilizing all 25W during a gaming session, or if it is throttling down to 15W.  I can also provide more detailed pictures if anyone needs them, but I assumed that since this is a fairly straightforward build using a very popular enclosure, no detailed pics were needed.  I also forgot to take them when assembling everything lol.

Congrats with your new Razer machine! 😀

I'm currently looking at the same white model and would like to doublecheck if the laptop truly sustains 25W TDP while being connected to eGPU. Could you please try running Intel Power Gadget before and during a game?

I performed three tests using this tool.  I'm not sure what to make of it, so maybe you can weigh in.

Test 1:  Log a quick session without making any changes.

These are "out of the box" settings since I have not changed any of these since receiving my laptop.  The Power Plan was set to "Balanced", and Synapse was running in "Balanced".

@iddqd07, according to a post by @itsage the TDP is being throttled to 15W when connected to an eGPU.

@itsage, were you able to bypass the throttling before returning your RBS?

Yeah, looks like it runs around 15w all the time. Which is weird, because @SolidFyre said here that RBS2019GTX is capable of running at 25w even with eGPU attached.

@triumph_013, I didn't have enough time to figure this out. I believe Razer Synapse has some controls over TDP. I never used Synapse so the fix might be rather easy if it's available in the software. There are reports of BIOS mods to bypass Razer Synapse settings too.

Maybe running Resident Evil 3 at 60fps is just not enough to warrant 25W?  It makes sense to only use what is needed, otherwise you are generating heat for no reason.  Are there any CPU benchmark tests I can run to see if it sustains 25W?

@iddqd07, the results are in.  I apologize for taking my time with this.

It looks like it doesn't have any problem sustaining 25W, at least for the Cinebench test.  What I find interesting is the CPU Frequency dropping shortly into the test, after the processor spiked up above 40W for a few seconds.  I don't know enough about computers to read too far into this, so I welcome some feedback.

@triumph_013, the short drop of CPU clock might be due to the heat generated while running on 40w... After the short term power boost (which allows 40W over about ~30 seconds) has come to an end the CPU temps might be that high that the CPU throttles until a certain temperature threshold is reached which allows the CPU to go in on the full 25w again (long term power). You might want to use Throttlestop to monitor the limitations (first picture - cross marks whhere limitations will be displayed). Throttlestop will also alow you to undervolt your CPU (second picture) to get even higher/more stable clocks.

All the best to you!

P.S.: Throttlesopt - as the name suggests - will also help to prevent your machine from throttling (within save limits).