My Mac shipped with macOS 10.15 Catalina installed, and I installed Windows 10 using Boot Camp and used Windows 10 1903 build 18362.295 with set_efi to be able to use the eGPU in Windows. During the install I followed remaker's excellent guide. This setup has worked nicely the last 12 months, but then I updated to Big Sur sometime during March/April and Windows just would not boot with a Blue Screen of Death error message PAGE FAULT IN A NONPAGED AREA (bthport.sys). Through some googling I found that the error was related to Bluetooth, but I couldn't manage to boot into Windows or restore from a previous restoration point.
So I decided to a full reinstall of Windows 10 using the Boot Camp assistant. Everything went well until I tried installing the Boot Camp drivers, and during installation I would get the same BSoD as before and the drivers were only partially installed (no Apple Trackpad support or Boot Camp control panel e.g.). After getting back to version 18362.30 and using Clover Configurator to set_efi the eGPU worked fine with bootcampdrivers May 2021 Adrenalin RED drivers, but I was still curious to see if it would be possible to use a newer version of Windows (and maybe install the Boot Camp driver package), so I tried to update to the latest insider build available to me. It actually works!
Actual instructions

Below are the steps I used, but I would guess you could pretty much skip downloading the older version of Windows and try the latest Windows 10 build directly.

All benchmarks were run in Windows 10 with a Dell S2721QS 27" 4K monitor (200% scaling). Internal LCD was disabled in Windows display settings. 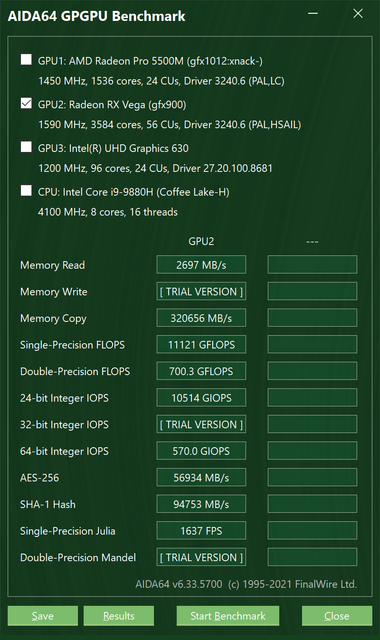 I have only been running the system for about 8 hours, but no freezes or slow-downs yet. I haven't tested it too hard though, but some casual Total War: Rome II worked great 😁

UPDATE 2021-08-02: System is still very reliable. I have only experienced one crash so far, and that was after I put Windows in "Hibernation mode".

@stalegjelsten, thank you for your guide.

Is it possible to enable secure boot after efi hack? Or it will stop working?

Hi @ivanosh. I haven't tried, so I'm really not sure. I would suggest that you read and ask someone with more knowledge in the apple_set_os.efi thread: https://egpu.io/forums/bootcamp/macbook-pro-16-windows-egpu-error-12-fix/