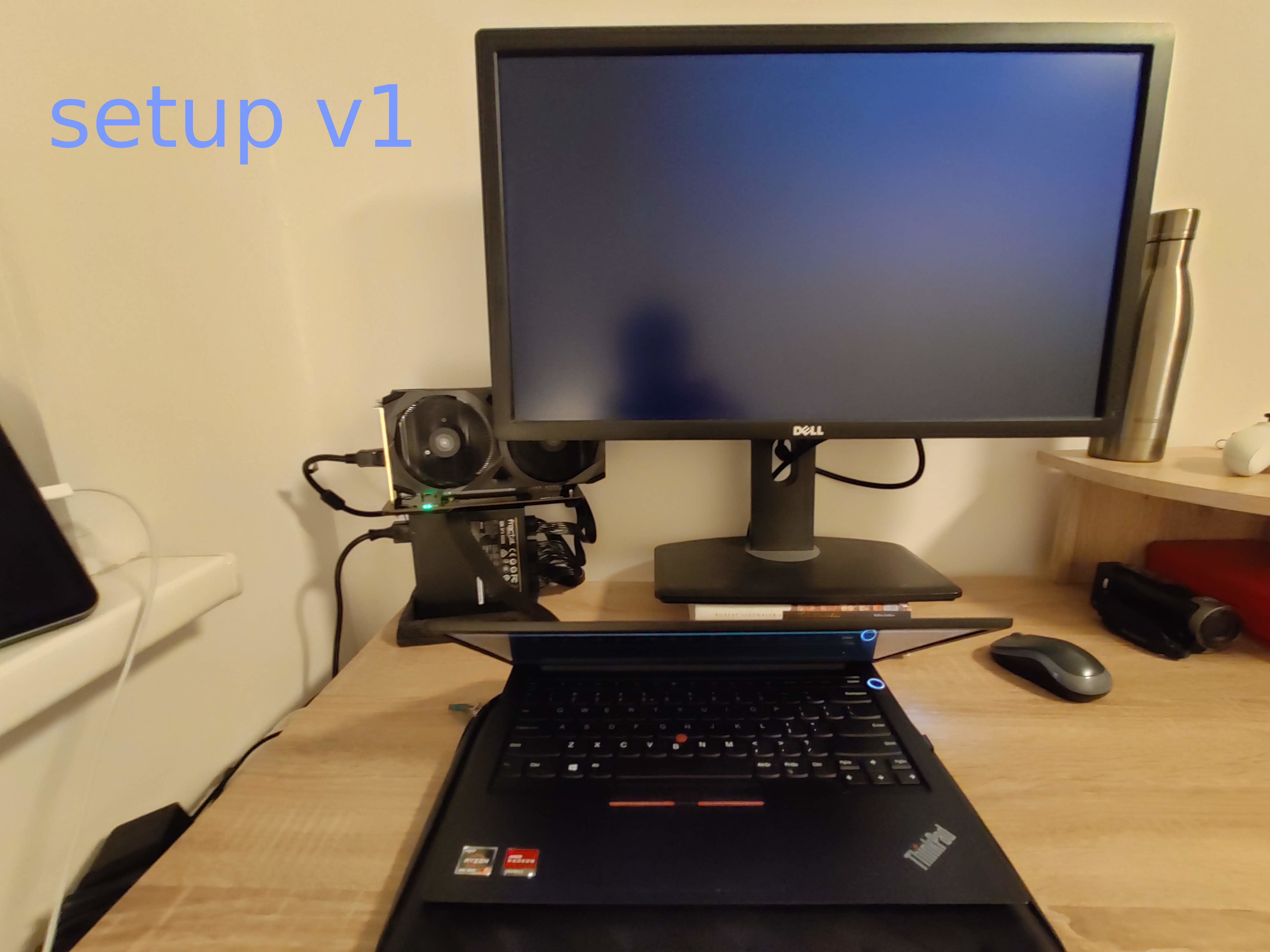 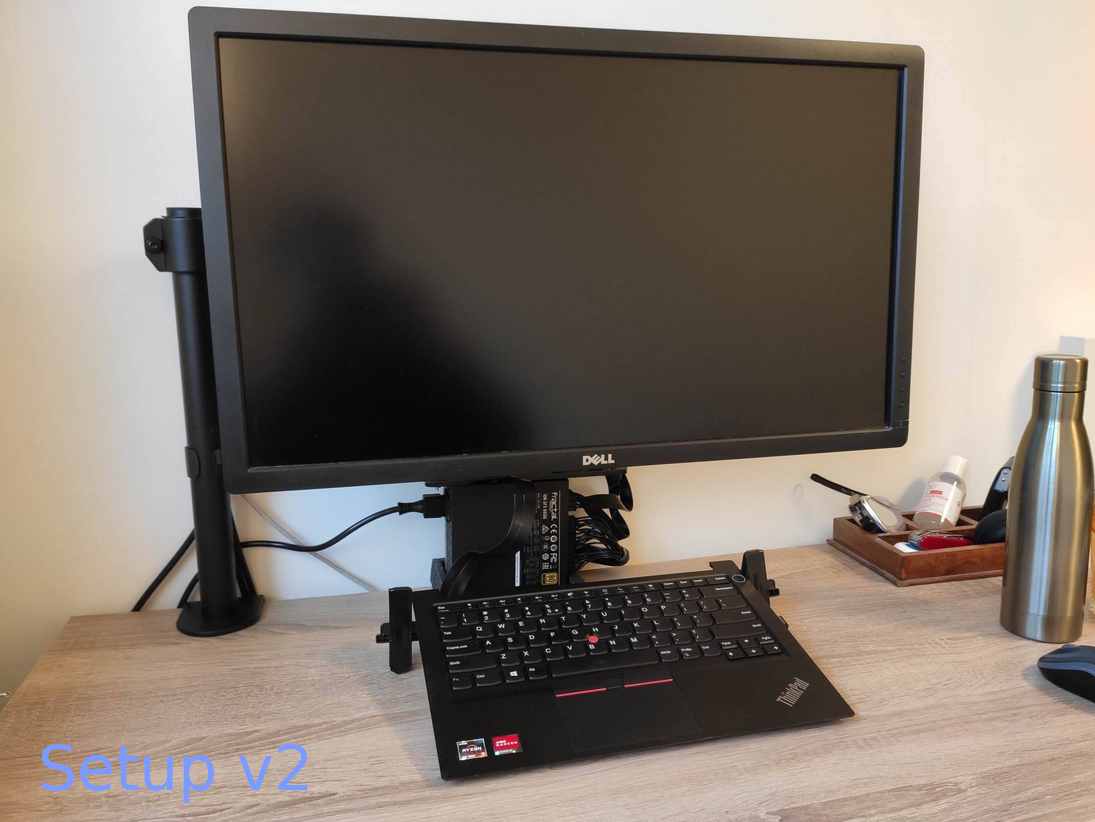 - Setup v2 - save as v1, but with display mount and Thinkpad E14 display removed due to mount being lower and internal display blocking the view (internal display does not work in Linux either way [works in Windows]). DIY raiser to allow airflow (made from a pants hanger 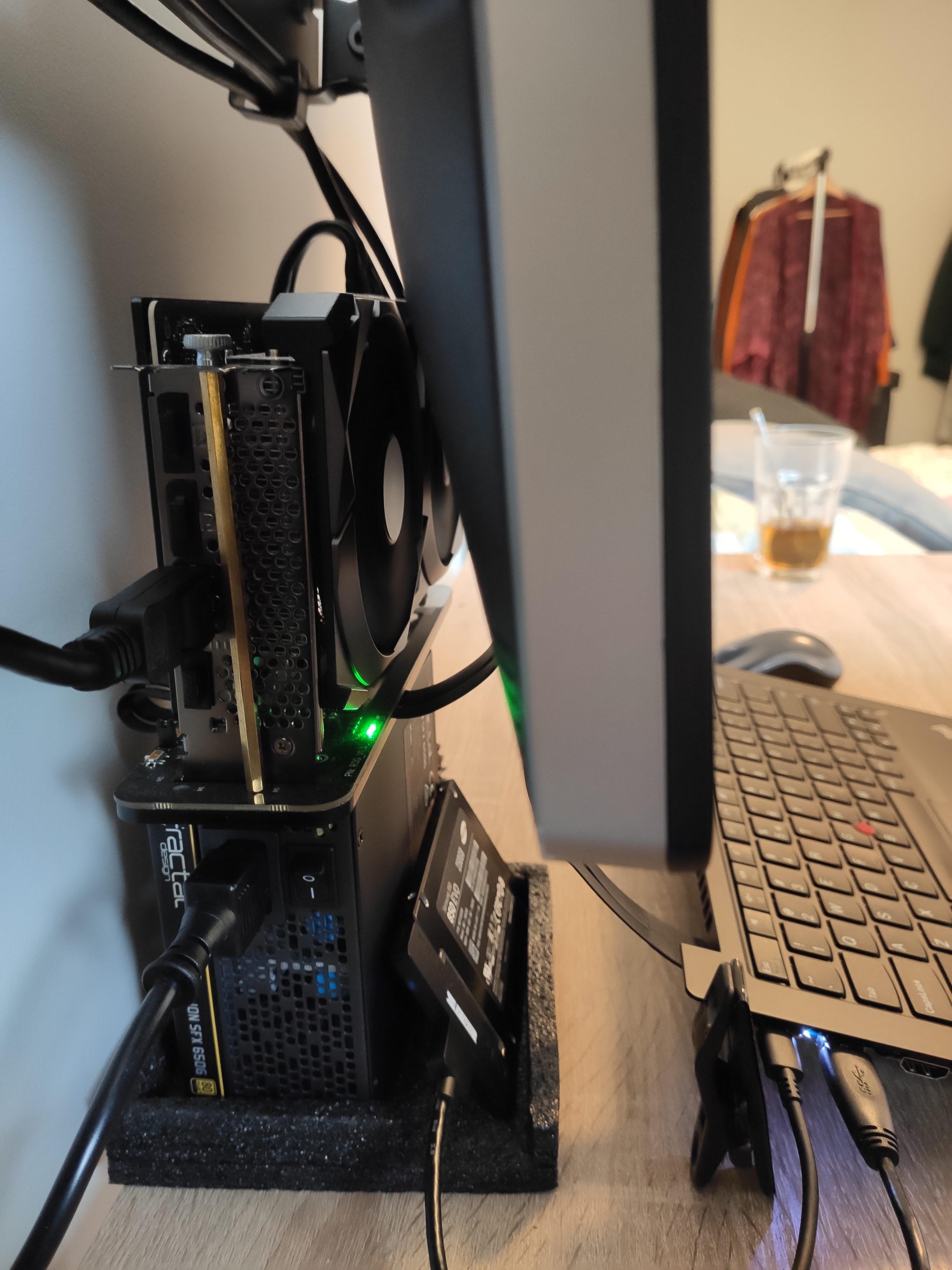 - Setup v2, another angle. eGPU is tucked behind the display. 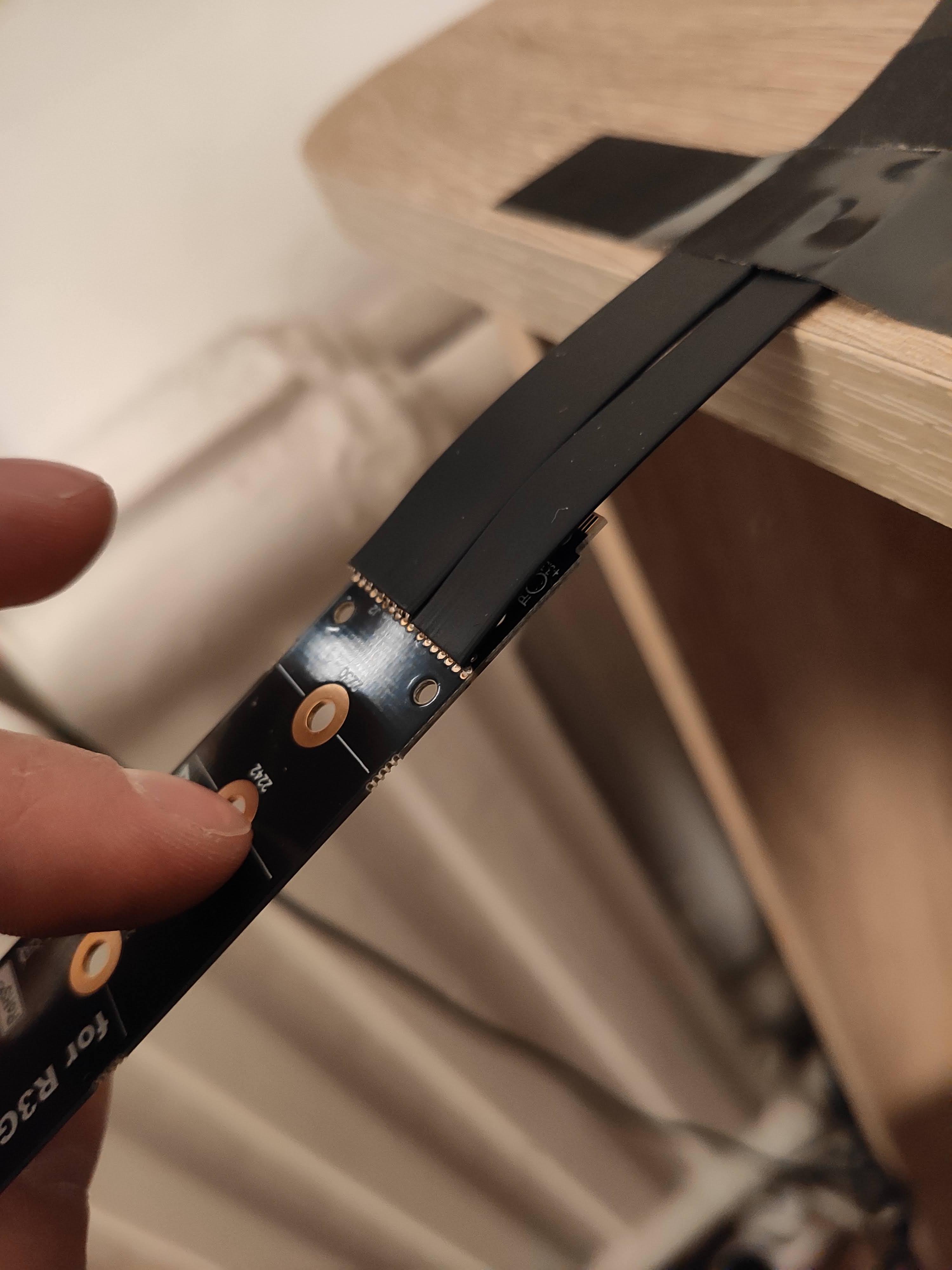 All benchmarks are done in Windows on external display. 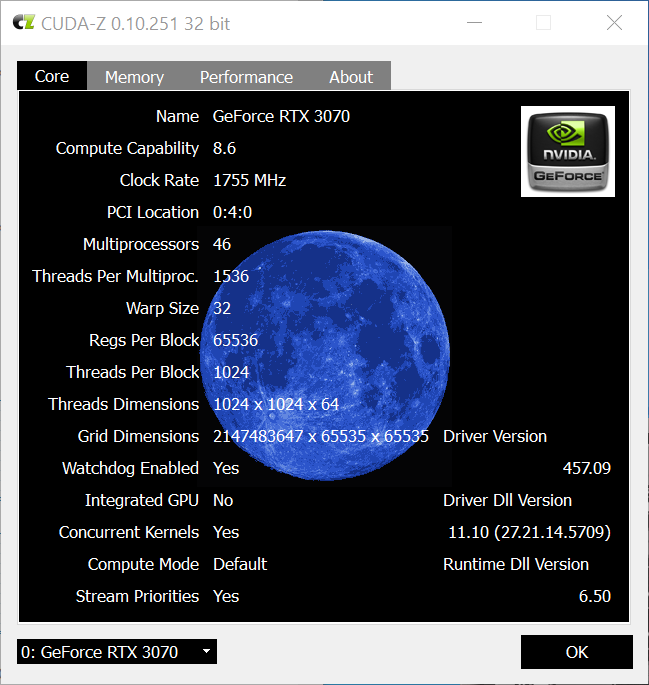 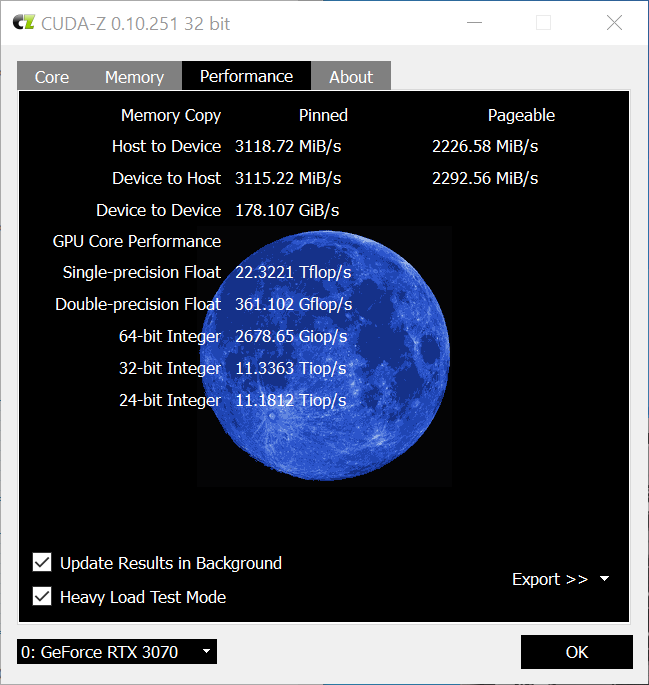 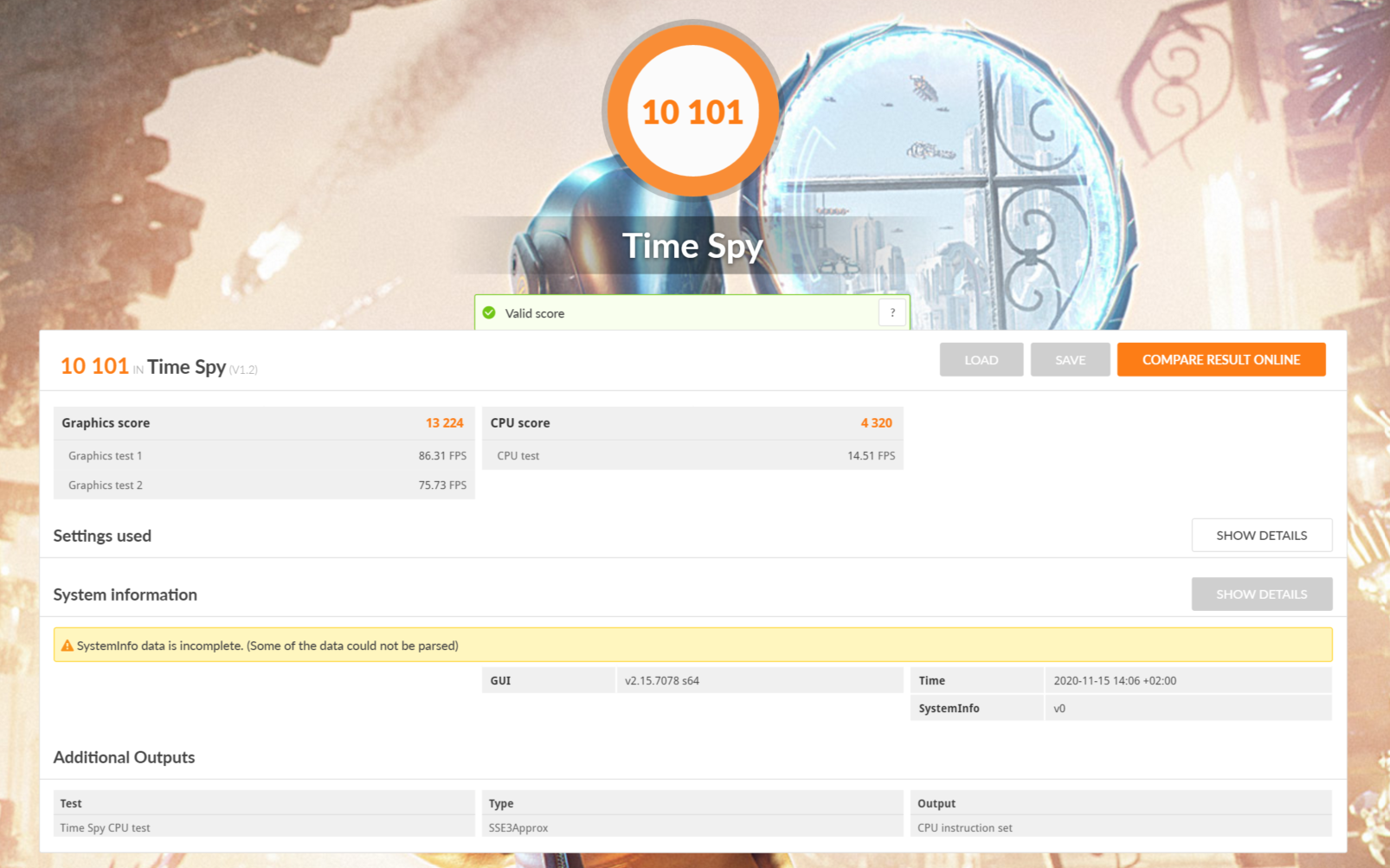 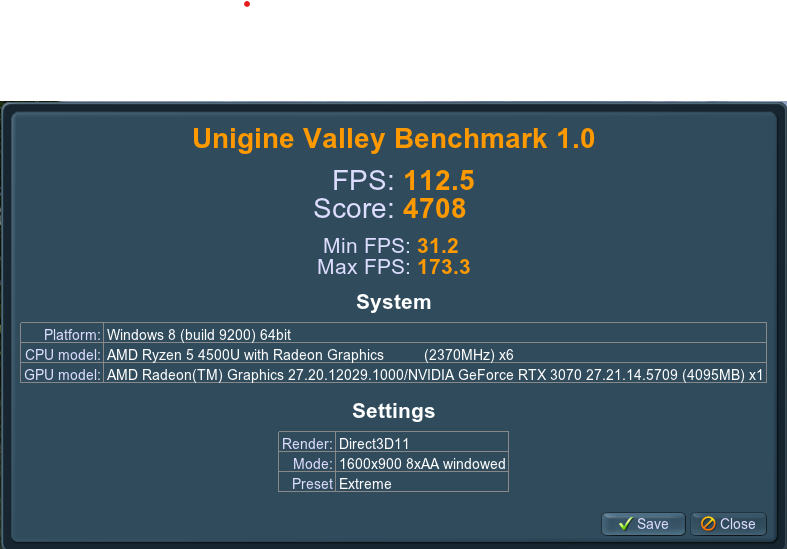 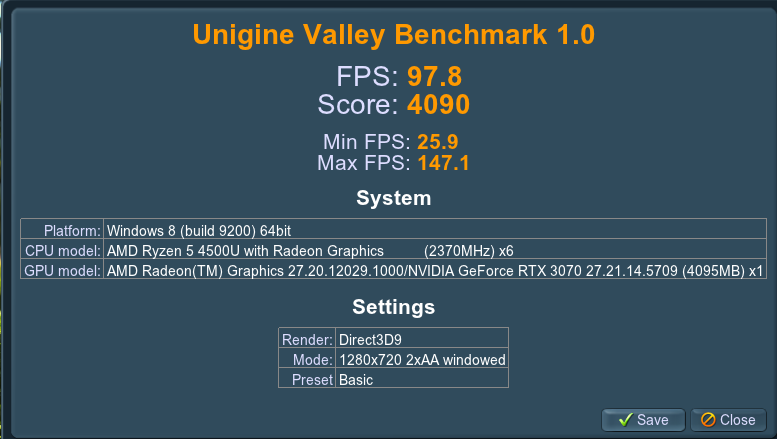 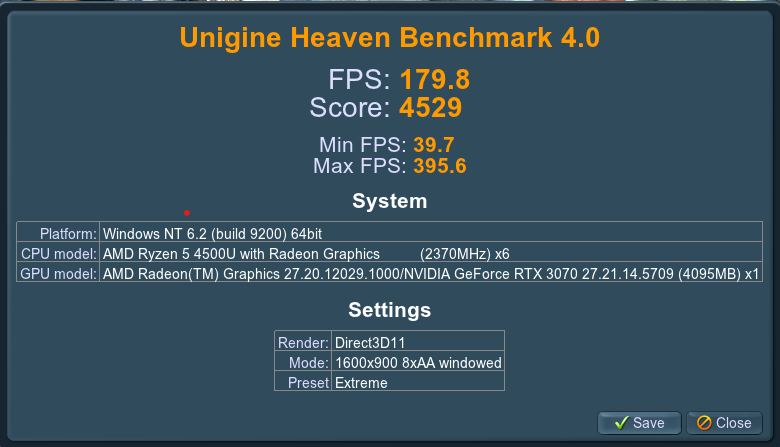 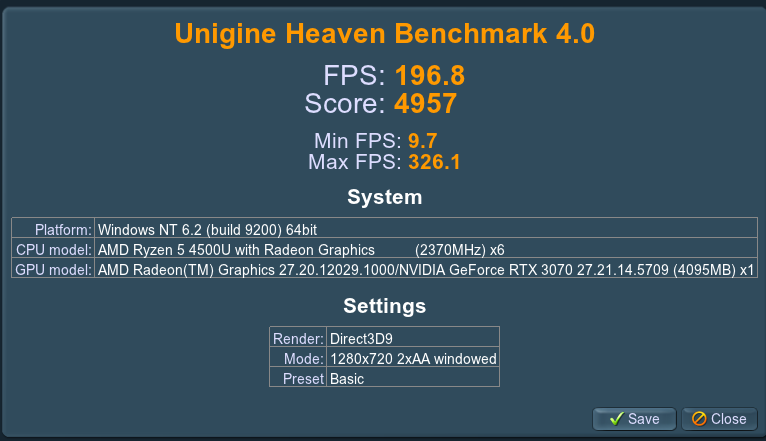 n.b. I ran the benchmarks with the default resolution the Basic / Extreme presets select.

Lenovo Thinkpad E14 Gen 2 is a laptop that ticked all the boxes for this project: good price (550eu), expandable RAM, 2x M.2 slots, Ryzen 5 4500U CPU and a great keyboard. Since this setup uses M.2 connector, you have to remove the bottom case to install the cable. The bottom case will not close without modding it and I did not want to do permanent modifications, so this is a stationary setup. The main disadvantage of using no bottom case is that ethernet connection can't be used as bottom case is part of the connector. You also need to raise the laptop from the table, since airflow is getting restricted otherwise.

eGPU M.2 setup starts saturating at GPUs similar to 2080Ti, which RTX 3070 is similar to (according to reports online). Thus this was maximum GPU I felt reasonable to go, before I build a full PC. Cooling is ok in this setup, temperatures never go higher than 72C in Furmark after 30mins of stress testing.

Setup v1 keeps the internal display attached. If your external display is high enough you can use your laptop in front of the display.

Setup v2 detaches the internal display it to convert the setup to full stationary mode and save some space on the table. The disadvantage to that is loosing the webcam and WIFI (since antenna is in the display). Since ethernet port also can't be use without bottom case, you need to use USB-Ethernet adapter. Or buy a wireless keyboard!

I am going to use this setup before I build a PC to house the GPU (that's also why the overkill PSU). Linux is for working with neural networks (PyTorch) and in Windows is for gaming.

Performance wise I am pretty happy with the results. M.2 port is the fastest way to use the GPU on a laptop without discrete GPU (soldered on or with MXM connector). Even though the M.2 only allows for PCIe x4 (4 lanes out of 16), Timespy shows light reduction in performance (~10%, dependent on task). Compare my Graphics score with this random user result https://www.3dmark.com/spy/15025788 . Graphics score shows 13224 / 14 756 * 100 = 89.6 % performance and this is with a slower laptop CPU and PCIe x4. There are no stutters that I can detect by eye. Red Dead Redemption runs at 59fps on Ultra in chapter 1.

- I noticed that having an internal display attached, even if mirroring is on, drops my fps in games dramatically (30%). This happens also if I am simply mirroring contents of main display to secondary display. Disconnecting the internal display solves this. E.g. I gain ~20fps (40+20fps) in Red Dead Redemption on Ultra. This may have affected my benchmarks, but I don't have time to rerun them.

Impressive build, and it is amazing how there is barley any bottleneck on this gpu on x4.

@ivan_gojak, Yes, I am happy about that as well. I followed this article on how much PCIe x4 vs x16 affects performance on 2080Ti https://www.techpowerup.com/review/nvidia-geforce-rtx-2080-ti-pci-express-scaling/7.html

Hi! I have only one question.

Is it possible to connect the adapter to the 2242 port on this ThinkPad?

@mr_zomka, you will have to cut the adapter to the right length, but there are already prepared holes for 2242 length. Otherwise it will overhang a battery screw and a speaker. I tested it function-wise and it works. If you get the non-TU version, the cable will come out on the right side due to 2242 port direction. If you get the TU version, it will come out on the left, but it will have to go across the whole laptop, so 50cm option is a must and even then its not very comfortable.
Also, In both TU and non-TU versions the cable will come out at the location of the speaker on either side, so I dont think you can mod bottom case if you want to have it on during use. 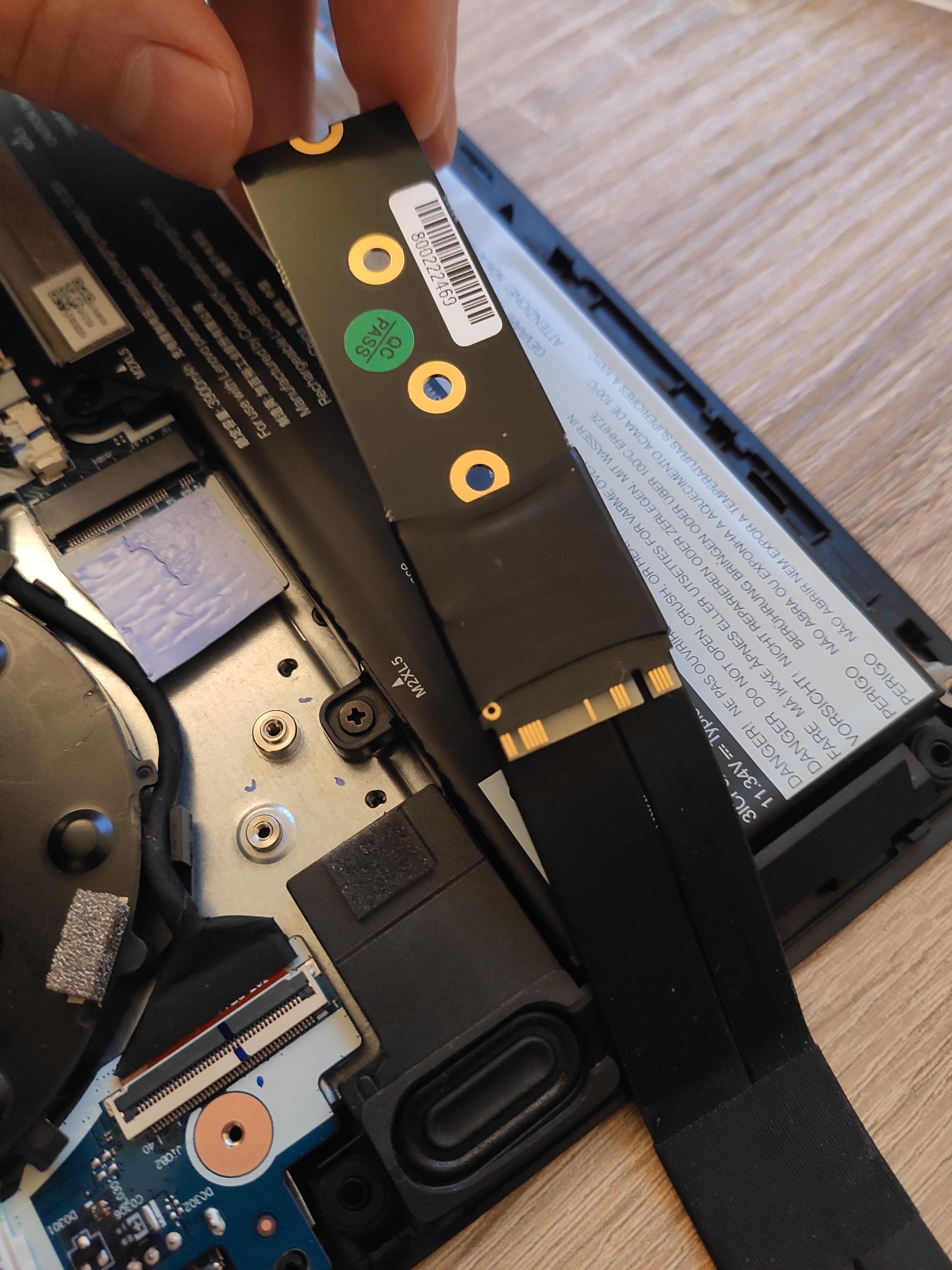 Hi! I also have a Ryzen notebook and I'm wondering if it is possible to use the notebook screen to play. Or you have to plug an external display to use the egpu ?

Hey, can you please confirm on what gen your pcie is running? I am currently having trouble running my egpu (same 3070). My graphic card crash everytime after nvidia-error43-fixer applied. When i check inside hwinfo, it shows the card is running on PCIe v4.0 while my m.2(dell 7567) only support PCIe v.3.

@atdsu, if I disconnect the display cable that attaches the lcd panel (eDP - internal display port), I get the improvement. I would not expect the same performance as on a desktop pc due to pci-e lane limitation (4x vs 16x on desktop). Overall relationship between the pcie lanes, cpu speed and different type of benchmarks can be a bit complicated in my experience.