As more AMD Ryzen 4000 laptops are coming to the market, I wanted to test one with eGPU. This being the first x4 M.2 eGPU.io build with one.

The Dell G5 SE 5055 has an all AMD configuration of Ryzen 7 4800H CPU and RX 5600M dGPU. I was also hoping there's an unadvertised Thunderbolt 3 port on this laptop based on marketing photos [Best Buy]. Unfortunately it's only a USB-C port with DisplayPort logo instead of Thunderbolt. M.2 eGPU through the ADT-Link R43SG is still a good option because there are two M.2 slots in this laptop.

I also got an RX 5600 XT ITX for this build to compare eGPU performance vs the RX 5600M dGPU. PowerColor didn't bring the RX 5700 XT to the US but this RX 5600 XT ITX is a nice choice at $300 on Amazon. The design looks almost identical to RX Vega 56 Nano. However the cooler shrout is made of plastic on this Navi ITX card instead of metal in the Vega card. It doesn't feel as sturdy in the hand.

I had the latest BIOS running on the Dell G5 SE. The installation process was straight forward. Open the plastic back cover (4x captive Phillips screws on the hinge area and 6x Phillips screws) and there's full access to the motherboard. I inserted the M.2 eGPU adapter into the SSD2 M.2 slot and it was good to go.

All three GPUs showed up and worked without issues. I turned the RX 5600M dGPU off in Device Manager when I ran benchmarks on the iGPU and eGPU.

You may have seen reports of the RX 5600M dGPU in the 16-in MacBook Pro out-performing RX 5700 XT eGPU through Thunderbolt 3 interface. I think that's subjective. As seen above the RX 5600 XT ITX eGPU through M.2 interface performs better than RX 5600M dGPU. I will pair this RX 5600 XT in a Thunderbolt 3 enclosure to test with the 2019 16-in MacBook Pro next.

Regarding the Dell G5 SE laptop, it's a great value for the performance. It's unfortunately a typical gaming laptop that consumes a lot of power. The power brick is as large as the DA-2 220W. It makes sense because this laptop power adapter produces 240W. When both the CPU and dGPU are going full speed, the cooling fans are loud. The most telling results are 3DMarks. When the dGPU was running, the cooling system was overwhelmed and CPU performance was reduced significantly. Hopefully we will see AMD ultrabooks with Radeon iGPU-only and Thunderbolt connectivity.

This topic is also published as an article here »

Funny how the world works! I randomly decided to google “Alienware Graphics Amplifier” versus TB3 enclosures, read your post from 2018... and then proceeded to see “What is this guy using these days?” clicked your signature, only to find that this post was literally just posted.

Your build looks extremely neat, I’m a bit of a newbie to the m.2 modification eGPUs admittedly.
I imagine that every laptop will be a bit different.

Considering how neat your build is though, I have to ask, are you able to fully put the cover back on the laptop? Also, in its current form (or I guess with typical builds) I imagine that it’s not practical to still use this as a “laptop” as you’d have to open the case, unplug the m.2 cables and then replug them in every time?

@stx8, The back cover is mostly back on but no screws are tightened. I use a laptop stand to create airflow underneath. It also helps with cable routing. Definitely no longer a laptop when this M.2 eGPU is connected.

Each laptop has its own M.2 slot orientation and distance to the edge of the bottom cover. A quick-connector solution would make M.2 eGPU adapter a lot more popular imo. Perhaps a flex cable with male M.2 to go inside the laptop and a female M.2 routed to the outside.

The Alienware Graphics Amplifier is in a sense Dell's proprietary M.2 eGPU solution. They designed a dedicated port and a very secure/beefy cable to the enclosure.

That GPU is lovely... I have been eyeing up one of them to deshroud and put in a Thunder 3 / Node lite - don't suppose you've checked it fits (assume you have one lying about).

IMO IRL performance matters much more than benchmarks in regards to dGPU vs eGPU, although you have done a much more comprehensive than others I have seen so very promising the egpu still outperforms gpu.

Look forward to seeing it paired with the MBP.

@eightarmedpet, I no longer have the Thunder2 (given to a member here) to test fitment unfortunately. I believe it should fit because the size is identical to an ITX RX 580 which I had fitted into the Thunder2 before. It should work nicely with the Node Lite/Thunder3 once you sort out the PCIe power connector on top.

I agree with IRL performance being the deciding factor whether eGPU solution is worth it over dGPU. Most laptops don't have a capable cooling system to handle both CPU & dGPU going full speed. In the case of this Dell G5 SE, it's very obvious.

My little dog, Max and I have been enjoying this loft space a lot. The left side/front of house gets warm morning sun and right side/back of house gets beautiful sunset. Here are a couple more photos.

That light is beautiful, and love the Maxs' bed. A double height / mezzanine floor is on my want list if I ever move home again (not planning to for a long while).
Is that a Samsung Frame TV too? with cables hidden in the wall? Such a stealthy set up. (I'm on the hunt for an ITX 580 now)

@eightarmedpet, I was strongly considering the RX 5500 XT ITX too but the performance doesn't seem that much better than RX 580. I've been using the RX 580 ITX with the VisionTek mini eGFX at my work for the past year. I plan on switching that work setup to the RX 5600 XT ITX once I complete testing with 2019 16-in MacBook Pro. Shoot me an email and I'll post the RX 580 ITX to you!

The double height/mezzanine floor was the selling point for me on this house. It was built in 1979 and had carpet originally. It gets very cold in Minnesota in the winter (about four-five months on average) so my plan is to build a kotatsu in this space. The FrameTV was easy to mount and cable management consisted of a single optical cable going down the wall (to OneConnect box). Outlets are behind the media console. Your Serif TV + eGPU setup was the inspiration.

Oh boy, thats super generous of you! I'll drop you a mail, I have a fun project in mind for whichever ITX card I can get hold of and i'll make sure I document it fully nad post on here, the 580 may be perfect (assuming the shroud is easy to remove).

A Kotatsu would be amazing... a pal of mine is currently redoing a house of a similar age, not usre it ever gets that cold here but i'll suggest a kotatsu to him as they look fantastic in sunken living areas as well as other places).

I think your Frame Tv set up looks and works better than my Serif did, it was always a slight pain leaning over to plug the laptop in. Impressively clean!

WOW this is really great. I though that pairing AMD APU with AMD eGPU would render the internal display useless as what I know in the ETAPrime's Motile 14 videos. (I have 3550H laptop, so maybe it's different from the newer renoir one or something?)

I hope that someday we could use some hub so I could make my laptop still mobile and when I wanted to, I could plug the eGPU to the slot.

I have the Motile 14 with egpu 1070 ti, the internal display works fine, even FreeSync.
Made a cutout underneath, and 3d printed slider door + frame to hide the cut neatly. The M.2 has a neodymium magnet underneath instead of using the screw, accidentally moving the laptop would disconnect it instead of doing damage.
Bottleneck is around 15% compared to my i5 8400 desktop, I can defiantly live with that at 1080p ultrawide (>60fps all the time), equal performance at 4k, but it's not a 4k card..
How it looks like in Windows graphics preference: 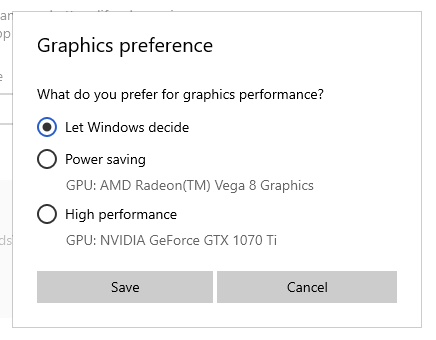 Bear in mind, plugging a display to the eGPU then booting the laptop disables the internal display, if you want to use external display connected to eGPU, you have to plug the display after powering on the laptop.
Also I can remove and insert the eGPU while the machine is on after disabling/enabling the eGPU in device manager with no problem, except the apps that use the eGPU will simply look black, like Thunderbolt behavior. I recommend putting the laptop to sleep instead.