Undervolted -50mv on cpu core + cache, no other adjustments in throttlestop made. Any more than that lost stability on full power loads.

Setup (back of TV unit is cut out to allow for air flow): 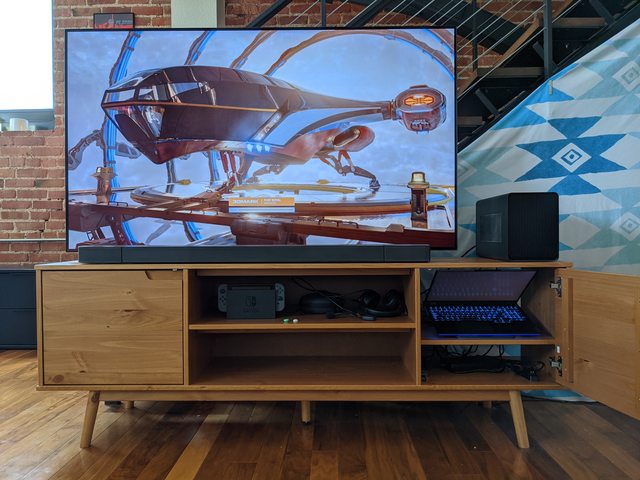 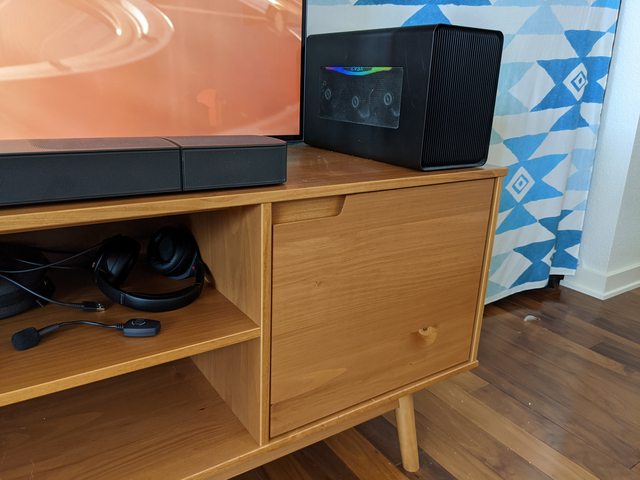 Nothing special, which has been a huge relief compared to my old Razer Blade 2019 that requires a long special installation method like getting CUDA drivers & disabling windows abillty to update drivers to get it working smoothly. Windows updated to latest version, latest drivers installed while eGPU was plugged in, done.

This laptop features a MUX switch which forces Optimius to be disabled, greatly "uncomplicating" getting the eGPU to work smoothly. That said, for best performance, I still have to open device manager to manually disable the dGPU the laptop comes with, otherwise I get occasional hitching in games.

I applied a modest undervolt after (-50mv, it gets pretty unstable too much more than that on full power loads).

Benchmarks (all benchmarks ran on an undervolt of -50mv and running in "performance" mode, except for the first benchmark which is my old 2019 RB15 laptop on the same eGPU)

I don't actually own any games that have benchmarking features included, but I do own 3D mark! For fun, here's a direct comparison to my old Razer Blade 2019 with the same exact eGPU (i7 8750H + TB3): 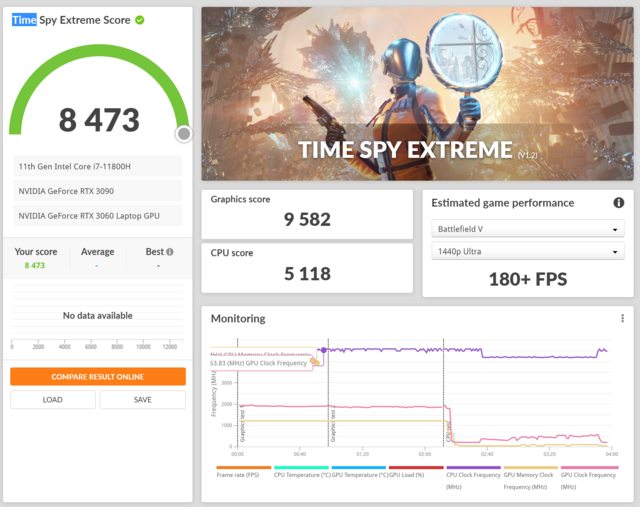 As you can see, upgrading to the Legion 7i gave me a huge 20% increase in the graphics score using the same exact video card, running at 4K.

I also tried applying an overclock to my 3090. This is the same benchmark with a +125 on core clock and +1050 on memory clock. I bet I could push higher to break 10K graphics, but I'm pretty happy with it! 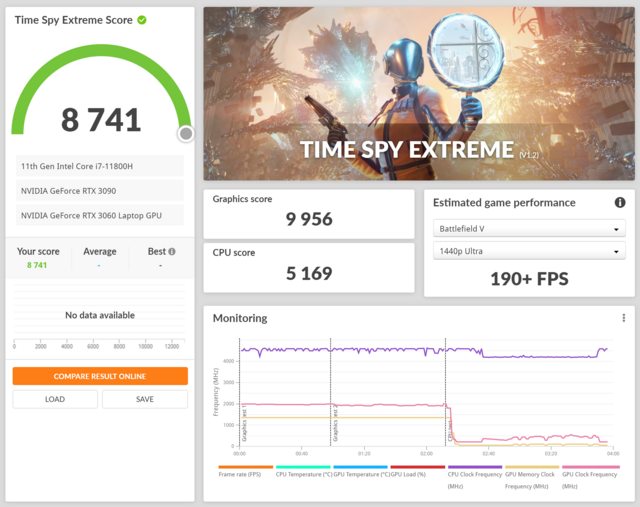 Now for the rest of my benchmarks. I don't prefer the non-4K versions since they don't show off the 4K advantage of eGPUs (and its now how I use mine), but still good to have. 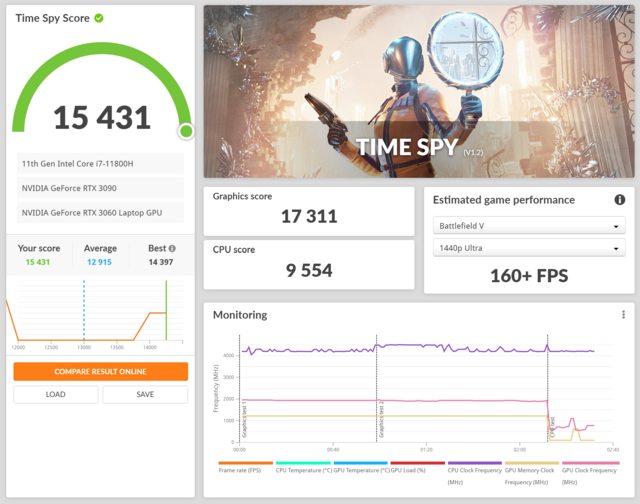 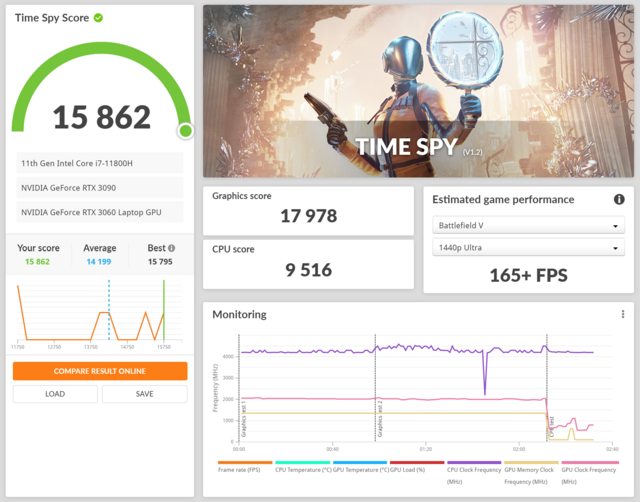 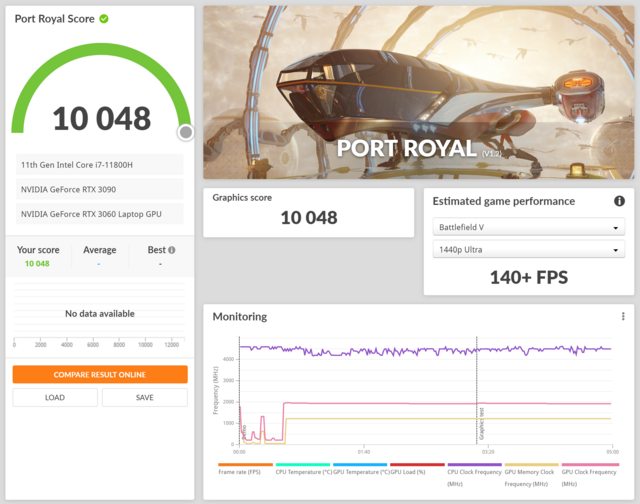 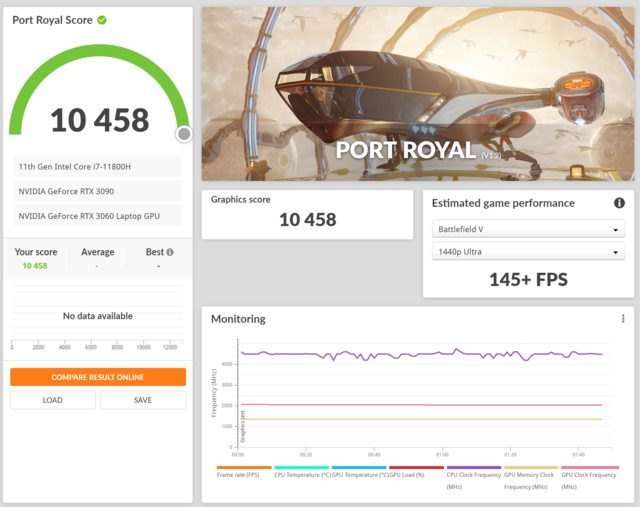 - Annoyingly this specific graphics card will run at 100% fan speed if the eGPU is plugged into the laptop while the laptop is off or asleep. My old 2080ti didn't have this issue. So I have to unplug every time I shut down. Lazy programming on EVGA's part?

- Unlike my old Razer Blade 2019, this laptop oddly doesn't play nice if the eGPU is hot plugged in or awaken from sleep mode. I get best results booting up with it already plugged in & shutting down every time I'm done. The 2019 Razer Blade was the exact opposite - it didn't like booting up already plugged in, it only wanted the eGPU to be plugged in after windows was fully booted and loaded, which was a PITA. But at least I could put it to sleep & have the eGPU wake up without issues?

- Thermals on the 7i are fantastic. Peak temps while benchmarking on the 11800H was 63C on auto fans, about 15C lower than what I was getting with my Razer Blade 15 2019 - and that was with me forcing max fans in the RB15! When I'm not docked, the temps still stay in a range of 40-75C, even under load. This is a huge improvement over the RB15, which struggled to stay under 95C w/ max fans while undocked under load.

- VR performance of this laptop has been fantastic compared to my Razer Blade 15 2019. Hard to quantify since there are no good VR benchmarks I'm aware of, but there is a noticeable framerate + CPU frametime boost in Alyx + Home Environment (going to test Skyrim VR next). However No Mans Sky  continues to run like crap on eGPU, ever since they did the big graphics update last year. The FPS in NMS and graphics frame times are quite excellent, a noticeable jump over my Razer Blade. But NMS suffers from serious CPU frametime spike issues when running VR on certain setups... and eGPU is one of those setups. I was hoping Tb4 would help NMS sky play nicely in VR but alas it does not (however it still runs fantastic in 2D at 4K).

So annoyingly, a new development has been I get occasional disconnects which is an issue I didn't have with my RB 2019. Seems to be no rhyme or reason, sometimes when booting up within 5 minutes the entire eGPU will disconnect and reconnect (requiring me to restart since hot plugging doesn't work on this laptop), sometimes it will go for hours before the eGPU connection "crashes" mid-game and requiring a restart.

Suspect it could maybe be my old TB3 cable? Ordered a "TB4" cable (though I think there's no real difference) to see if that might be the culprit. Already did everything involving turning off selective suspend/battery save features, etc and they did nothing.

If the new cable doesn't seem to help, I'll try going through my old method of blocking window's ability to install drivers then DDU + manually installing video cards drivers from CUDA dev kit. Hopefully can avoid that though since its a bit of a PITA to do!

Update: The cable didn't seem to do much. But ran a windows update, ran DDU, disabled window's ability to automatically install drivers, and then reinstalled the drivers manually from the latest release of CUDA for my 3060 dGPU and 3090 eGPU (which included installing an nvidia USB-C driver).

Booted in, and seems to be working smoothly? Haven't had a random disconnect yet. And better yet, if I boot with Optimus disabled, I don't get random hitching anymore when running intensive games while the dGPU is still enabled in device manager. Before if I had the 3060 enabled, it would hitch.

see if there are any Thunderbolt 4 firmware updates available for your laptop?

None available. However its been smooth going since the manual driver install & not running synapse.

Spoke too soon. Had it happen again last couple of nights. Really wish I could figure out whats going on. Reinstalled TB4 drivers which appeared to do nothing. At least now I can get it to recover 50% of the time by simply plugging into the other thunderbolt 4 port (the other 50% of the time its clear something crashed and a reboot is required).

Seems to happen completely randomly, perhaps slightly related to performance. Sometimes it'll trigger shortly after boot up, other times it will be fine until I'm 30 minutes into a game, other times I can play for 2 hours before running into it. Anecdotally I seem to get better results if I close out of Synapse (but it still happens). Power settings all check out. At least the boot-up eGPU crashing seems to not be happening much anymore vs mid-game crashing.

The only thing I haven't investigated yet is if the PSU is faulty on the eGPU... but that would be odd since it worked perfectly on my old laptop. Perhaps though with the greater output of TB4/11th gen the 3090 is able to draw closer to the power limits of the PSU in the GPU? Sort of debating if its worth dropping $$$ on a new PSU and trying to get it to fit in the core x chroma.

Got some of the same disconnects with my Legion 5i pro.

Never had this issue with the same eGPU / cable on my last devices.

It can happen on the 1st high load GPU app I launch after boot or randomly without specific action (last ones are very rare).

When it happen, sometime I can recover without full reboot with :

This suggests it's not a real disconnect and more software / driver / bios issue.

Interesting, had no idea that shortcut existed. I'll try that next time.

Anecdotally, with Synapse closed, the Legion set to performance mode, and me playing a "less intense" game like magic arena I had no crashes last night. So it does tell me that the intensity of the activity probably matters a little.

If I was feeling really adventurous I'd attempt a clean (non-lenovo) install of windows to see if something Lenovo is doing is messing up the eGPU connection. But then I'd lose out on a lot of key features of the laptop which I don't want to do.

Had more crashes again. But potentially found a (for real?) fix? 2 days in a row, gaming 4+ hours each day on Mass Effect Legendary Edition with no crashes (previously would crash at least once during a session).

Solution was to set in the nvidia control panel for power management mode to "prefer maximum performance", and I also set in the registry for the graphics drivers to tdrdelay = 60 & added a value to TdrDdiDelay to also be 60. Smooth sailing since. I might adjust these though as now I get a tiny barely-noticable microsecond hitch once every 5 minutes or so. Also, wasn't BSOD'ing with TDR errors so it probably isn't related. But in any case, haven't had my eGPU crashing since.

Sadly, pretty sure setting nvidia to prefer max performance will hurt battery life a lot if I don't switch it back to normal mode when I'm being portable and it isn't an issue I had with my old laptop. So quite annoying to have to jump through these hoops.

More updates on this just in case google leads someone here, since I seem to be the only person on the internet with this specific config and issue.

So... bad news and good news. Bad news is that the above solution *helped* but didn't actually solve the problem. I was still getting occasional disconnect issues, especially as I started playing other more intensive games (like Halo Infinite) or doing stuff like multiplayer on discord (which involved plugging in my wireless mic). It definitely seems IO power related as everything is worse the more stuff that is plugged into my eGPU or my laptop, and its very likely to happen if I boot up my PC with all my wireless peripherals turned on (but once I reboot it is smooth sailing).

I tried one last thing just to see if I could improve it and it was completely smooth sailing for a week - Halo + Discord for hours on end was no problem, ME was no issue, everything just worked. What I did was I used Afterburner to underclock my eGPU -125 on core and -500 on memory, then throttlestop to undervolt my cpu by -25 (you can't really go too much farther on when plugged in without BSOD) and limit my max turbo to 38 from 50. Performance impact was negligible but had absolutely zero issues with disconnecting outside the IO-connecting startup window.

After that I tried running with just the throttlestop settings and removed the eGPU underclock. Again, same result. Had absolutely zero issues for a week on a variety of games/stuff connected to my laptop, now with no perceptible performance loss. I'm sure I'm definitely leaving some performance on the table but this result tells me that something about this chip/laptop spinning up to full 5Ghz turbo with an eGPU is just too much power draw for it to handle cleanly. Willing to bet that by limiting my turbo to 3.8Ghz & lowering the voltage on the CPU it gives everything enough headroom.