Summary of the title

Component of the not so power hungry being

2. RAZER CORE X MERCURY (can deal with most of 3 FANNED GPUs) 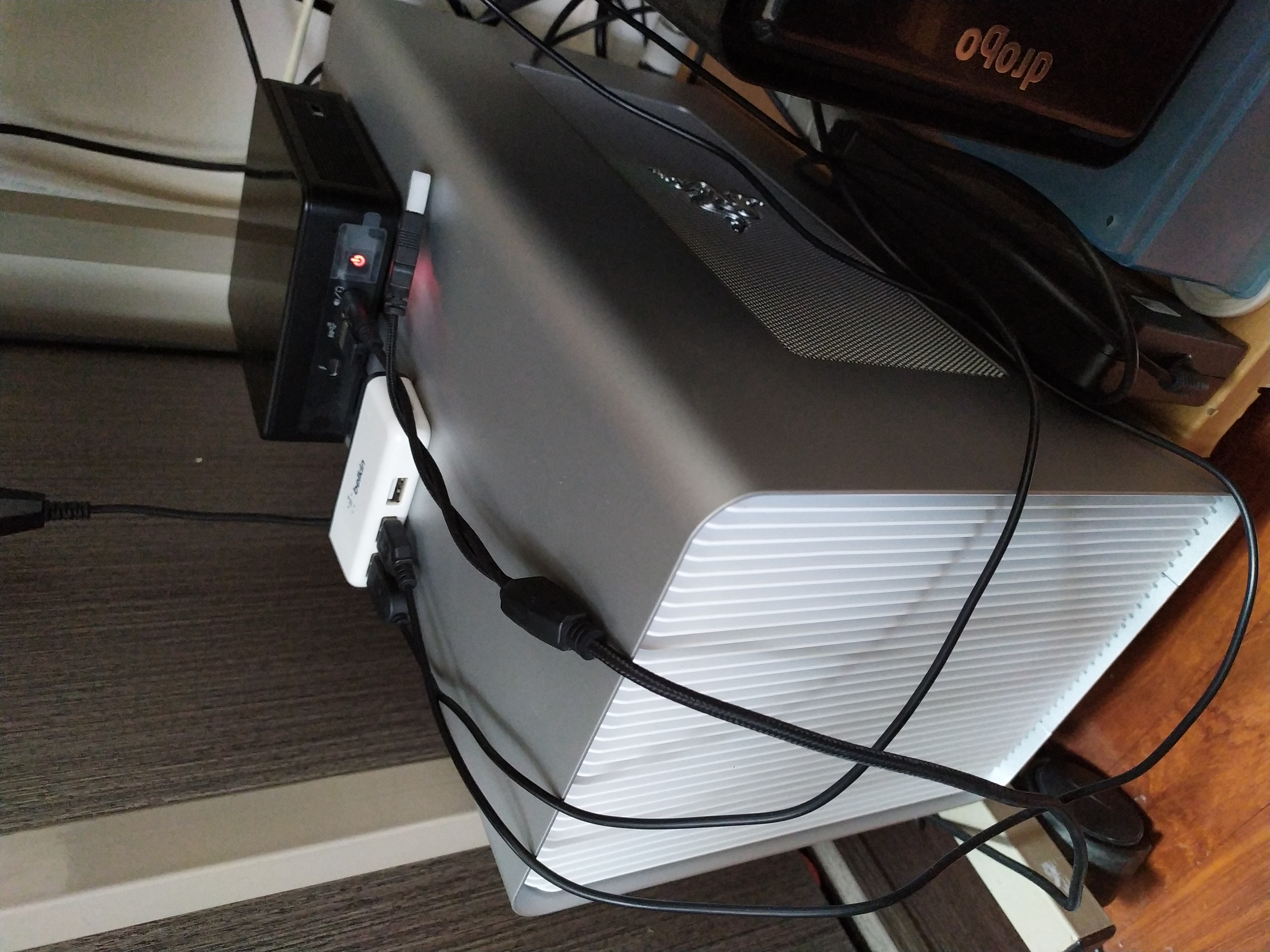 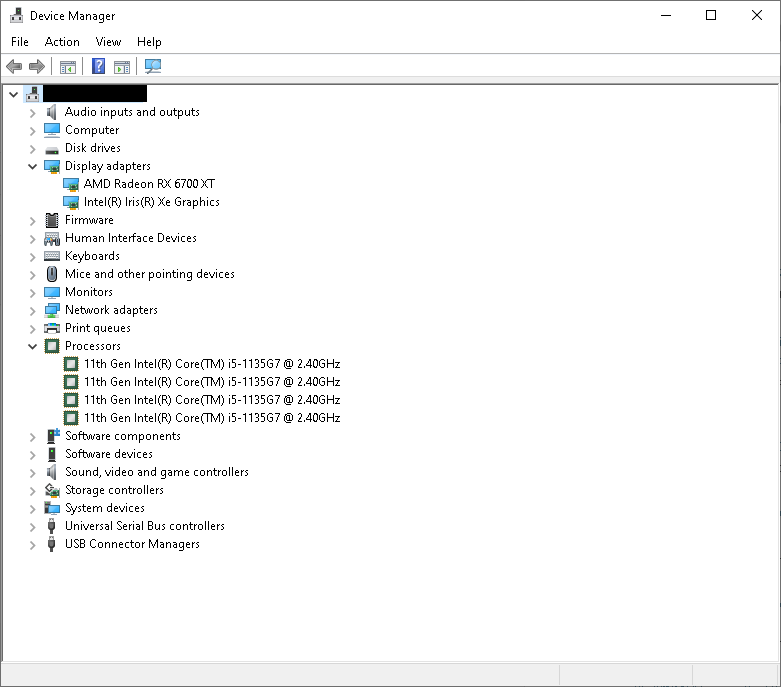 First of all, I let you see the result. It looks like I have built an ITX rig, in reality, I am not. I just like something not so power hungry, efficient, light after I give what a scapler needs, first batch of 3060Ti, including ryzen X570 board. It seems I have sent a buyer to god, thanks for BTC dropping from 60KUSD (for 1BTC) to 50K (for 1 BTC)

December 2020, I was asking a tiger lake based laptop, because I remembered something, I selected an AMD RYZEN desktop instead until March 2021,as someone asks for RTX3060Ti, I decide to dump the desktop at the same time.

April 2021, there are two new beings, tiger lake NUC (imported) and rocket lake desktop , as Rocket lake's performance is bad so I decide to select a NUC this time.

NUC has four important things which I appreciate during setting, Can use actual cores, can decide when I like to activate overloading function, the GPU is not bad (not only with 80EUs), and thunderbolt 3 (that PCIe muxer with one USB3 10Gbps)

I personally have heard eGPU during watching a video between 2009 and 2012, , I think the rest? well just read by yourself.

The overall is tricky as I have to find a correct base or I cannot use something good. For Tidyness and long time use, I am forced to use Razer Core X Mercury (which shows in BLANC) to fit that GPU.

The GPU's length is close to 330mm, 3 fanned, 2.5 SLOT DEPTH, Standard Height which concerns if that razer box can handle, SHE DOES.

The overall is lucky as I purchased the last box blanco from a shop, walk-in while there are so plenty GPUs which are going to deliver. Because I don't have a monitor for 4K rendering,low availability of GPU, tight budget . So I am just look for 2K rendering for the time being. During enquiry, only RTX3060 (GREEN) and Radeon 6700XT (RED) suits me. As the GREEN is sold out so I selected that RED GPU, noticing young age (2021 MARCH), fast shadering, bigger base cache, with one fast 96MB cache, overall balanced for 1080P gaming. The salesperson reminds me that the box have to apply with a TB3 controller, I personally have one on hand so it is ok even the input speed is not 32Gbps.

I have read manual found I moved on, It is said If using iGPU out, then the performance might get lowered more. I tested iGPU output first as it is a must as some authors test if can get something via in-built monitor, It is. Then I connect my monitor to eGPU for fun.

In here, I try to make something like what gaming console usually does, 60FPS (50FPS for Eurasia). In most cases, 60fps is enough, and making your whole system deal with more important things. 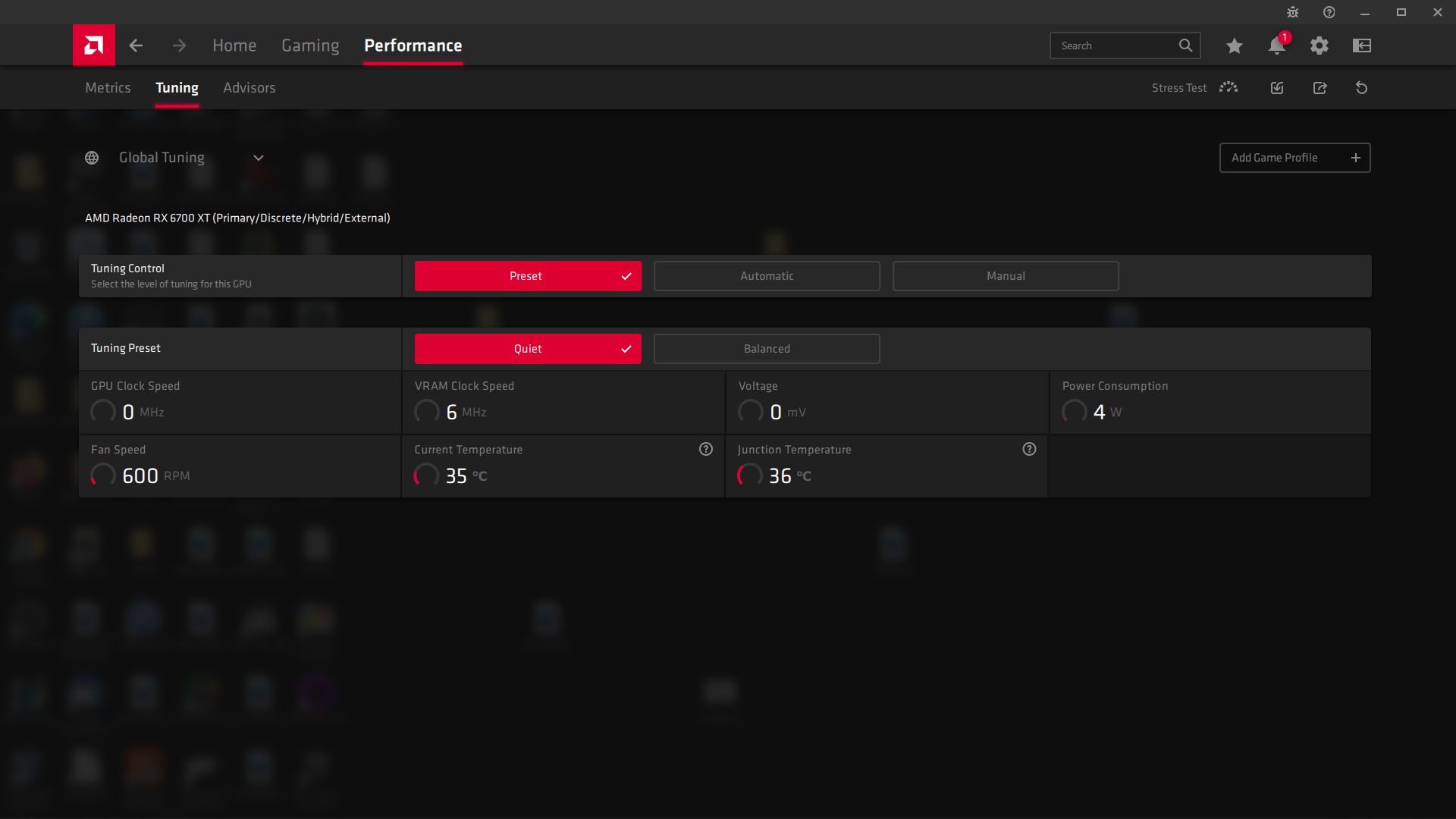 In ray tracing test, the rendering environment is 30% higher than my display (That one is just a typical FULL-HD display), If putting back to 1080p then there might be 20% more performance depending which are being switched on. 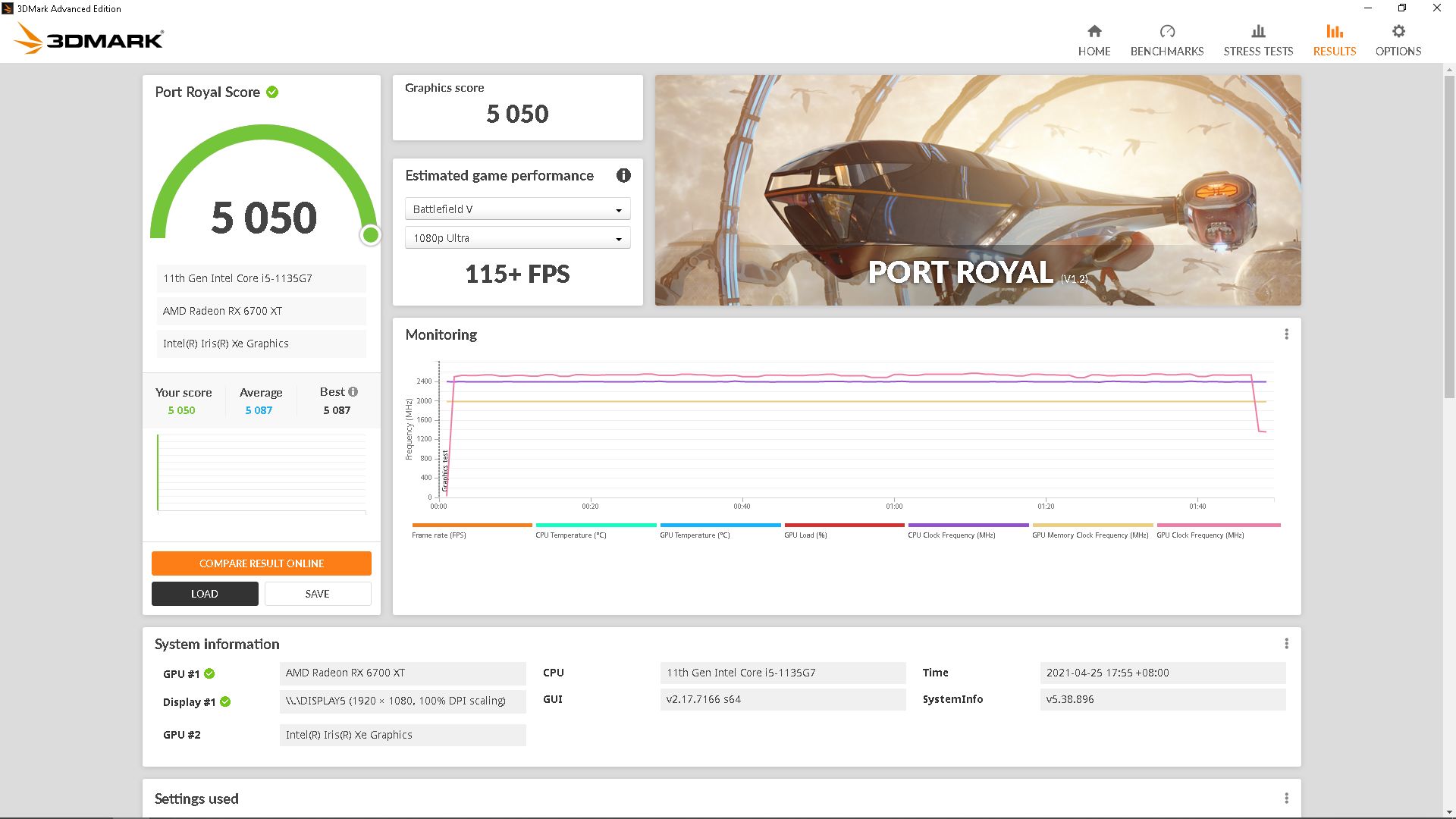 The below is about DX12 Performance in Typical Playing, Seems there is sufficient space to pressurize more. 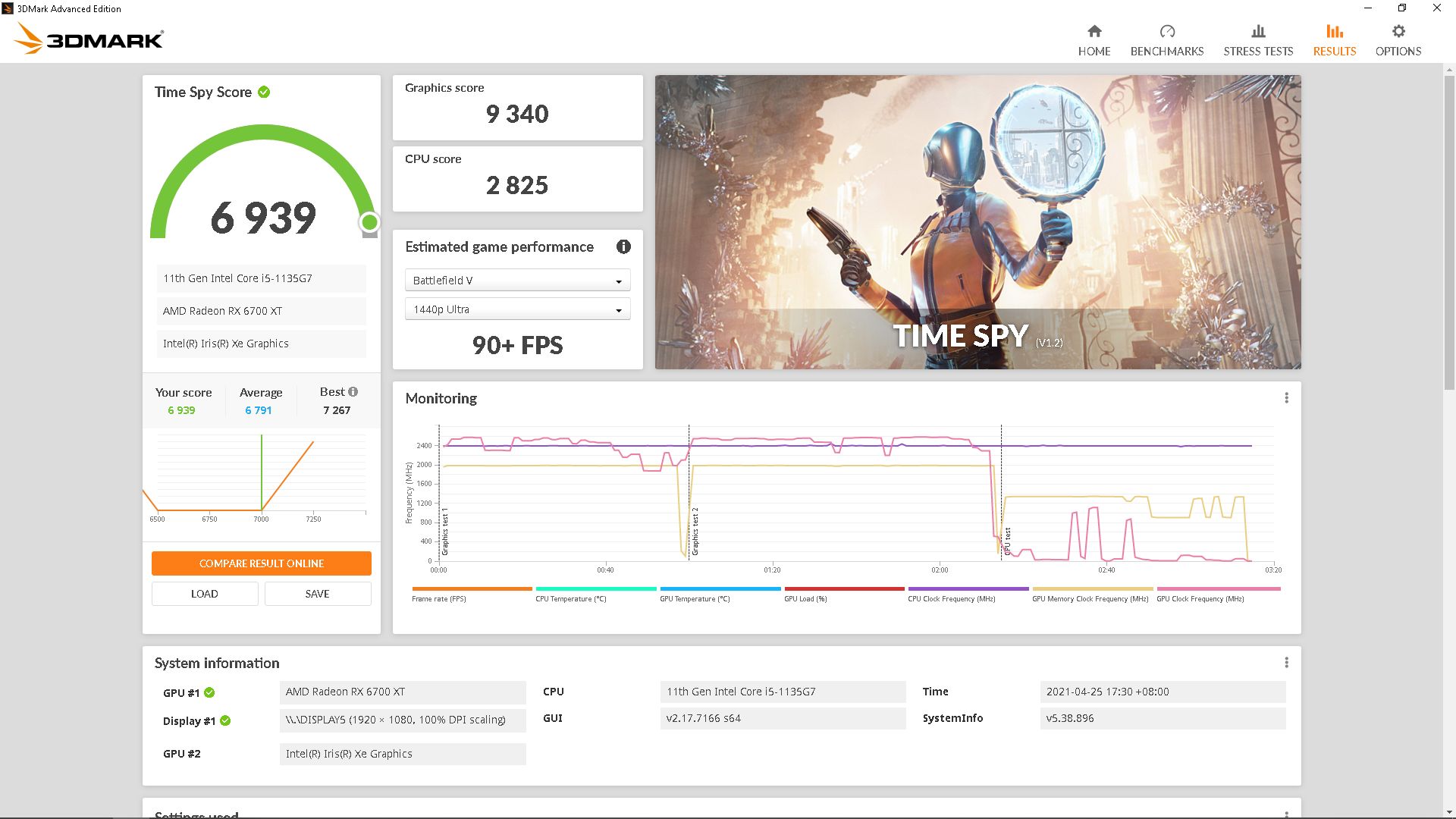 Gaming? Perhaps can notice either my youtube channel ( https://www.youtube.com/channel/UC_Ep-ZE9Q8lECVQAvc3aEfA) or ODYSEE channel( https://odysee.com/@LEETUMBRA:d , Is available accessing via LBRY P2P DESKTOP too) later on as I am still tuning the system for the time being.

NOTE: Although the CPU has TB4 built-in . In reality, the foundation only describes that NUC is a TB3 powered being, plus the external box is only coming with TB3 CHIP, you have ideas how old the being is. Whatever the situation is, The Combination can let me enjoy some of mad configurations found in Cyberpunk 2077 (1.2+) or that M$ Flight Simulator MMXX.

Perhaps may someone ask how good RTX3080Ti is, I only know if bandwidth, amount of cache is not a question, then the rest is about the processor herself just like what AMD does on a board with 16GB GDDR6 soldered. It seems 3080Ti is a very good choice if you play in 4K very often. It is said you can earn nothing from "mining", trading has a chance to earn something such as rebuilding a rig after a scapler ask one (first batch) RTX3060Ti on my hand.

Thank you for your build. Would you mind completing the build template to capture all pertinent info?

@kenneth_chu, Hi, I'm having a very similar setup but facing problems with detecting the Sapphire 6700XT. It does not show up as Microsoft Display Adaptor in Device Manager on Win10

I wanted to know if it worked by simply plug and play.

Before say more,  Have you connected AC power, DC power (Which is eight pin plus six pin) for your card and the base,using correct cable and using Windows 10 (EFI mode) ?

Nice build, i like it with the company NUC

@kenneth_chu, thanks for your reply.

The eight-pin and six-pin were connected fine. Also the fans on the card spins on start up of Windows.

In Win10, I can see the razer core X detected by the Thunderbolt Control Center. I have also changed the setting to always connect.

Windows EFI mode, this I am unaware of.

Thanks again, I have to say I'm fairly new to the egpu setup

@kenneth_chu, I have booted into Win10 EFI mode. (Device Manager has not yet detected the 6700XT)

Alternatively, I purchased a second hand GTX750 for diagnostics purposes. I inserted the card into the eGPU, plugged in the thunderbolt; and immediately it detected the card in the Device Manager.

Also it has come to my knowledge that the 6700XT is not compatible with the Razer Core X.

I bought a second hand Sonnet eGPU Breakaway Box 550 which supports 6700XT but to my astonishment the 6700XT still did not get detected.

GTX750 has no problem. It gets detected by plug-and-play even on the Sonnet eGPU.

Only the 6700XT seems to be the issue. Earlier it worked fine on Linux OS (for mining) on a friend's system.

I reached out to Sapphire (the manufacturer), they think it could be the problem with the eGPU since it worked fine on Linux OS.

What seems to be the problem. Any suggestions.

Your eGPU will need to be connected when you install the AMD driver and software.

@mini-i5, Thanks for your reply.

I have downloaded the latest driver for the RX6700 XT but the software too would not detect the card.

I assume first, the card should show up as Microsoft Basic Display Adaptor when the eGPU is connected to the system, which is not happening.