Hello Friends at Epgu.  This setup is my first ever eGPU build. I've wanted to do it for so long.  It's not an ideal build. Please feel free to condemn it if you find it lacking.

System specs
When I first bought this laptop, I was still using an 8year old MacBook Pro (Which I still love very much).
However, due to extreme overheating, I quickly opted for a Windows-PC, and I made a few mistakes that no gamer should have overlooked. They are:
- The lack of any Thunderbolt ports
- The lack of former research (The 8750H in this laptop overheats and throttles quite bad)

The rest of my system specs are:
-24GB DDR4 Ram running at 2400Mhz due to the lack of bios support for XMP.
-Samsung 970 Evo 500GB (Which I've had to remove to accommodate the EXP GDC)
-1TB HDD (Which I used to install the OS to test the setup on) 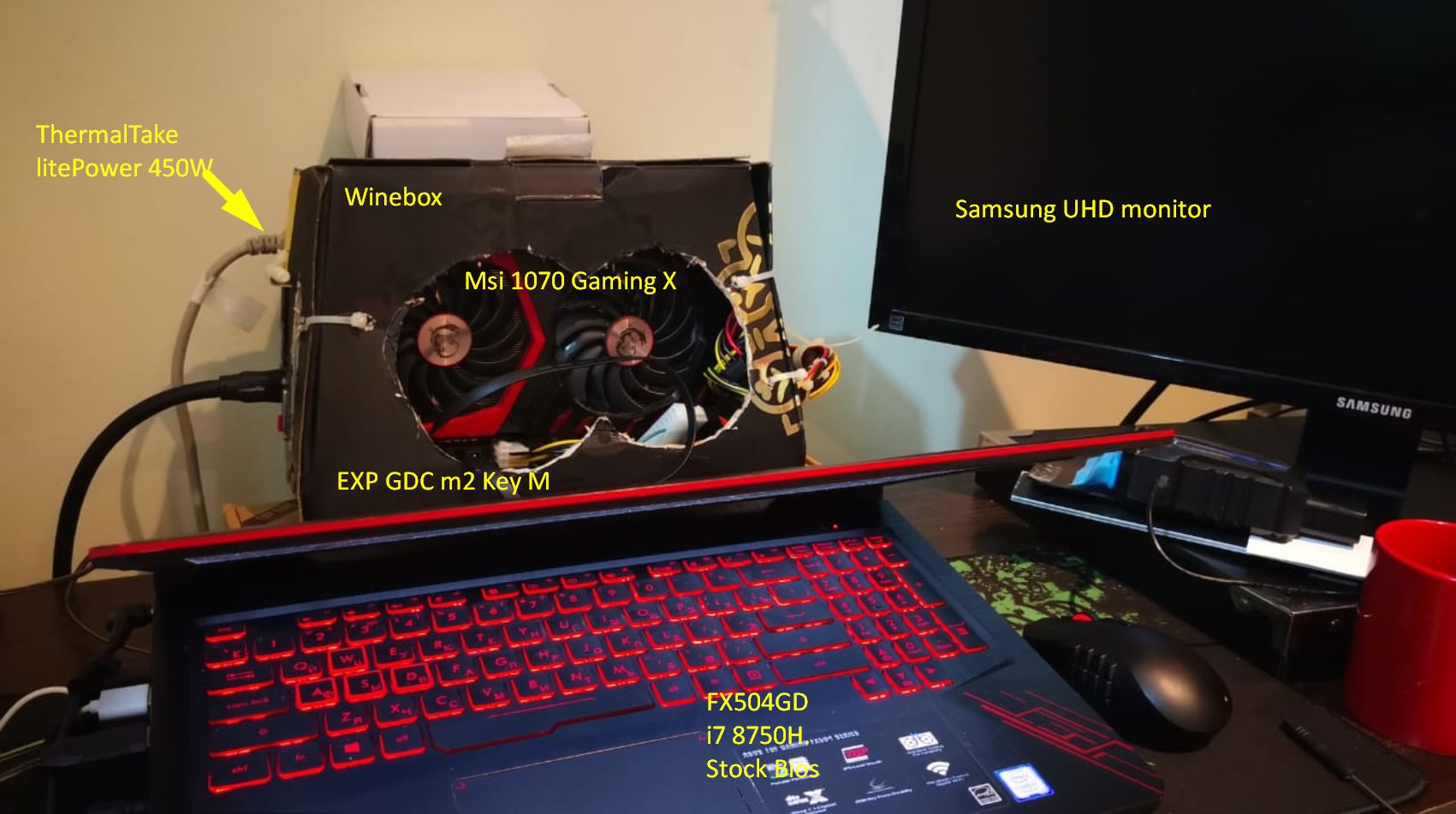 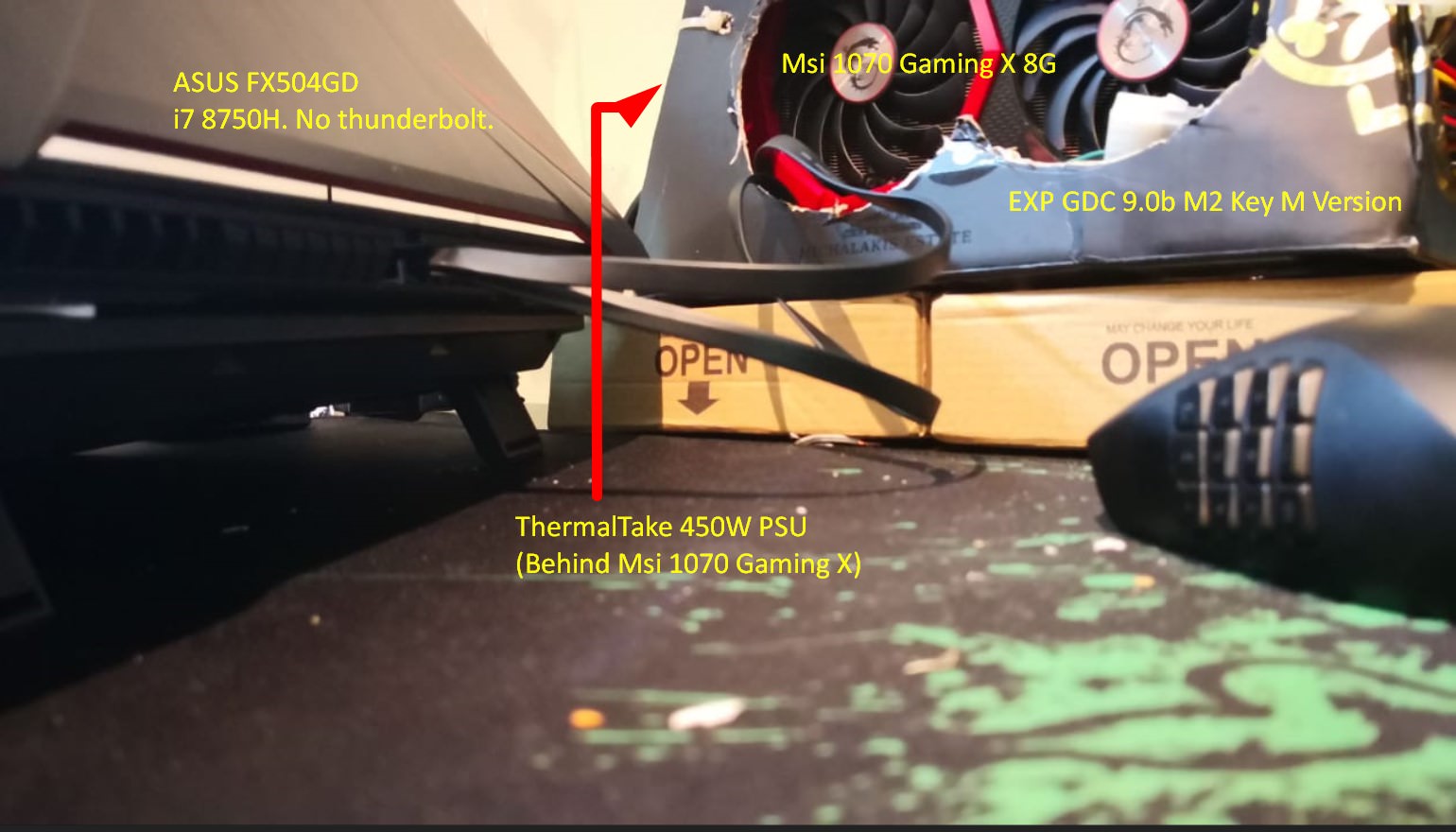 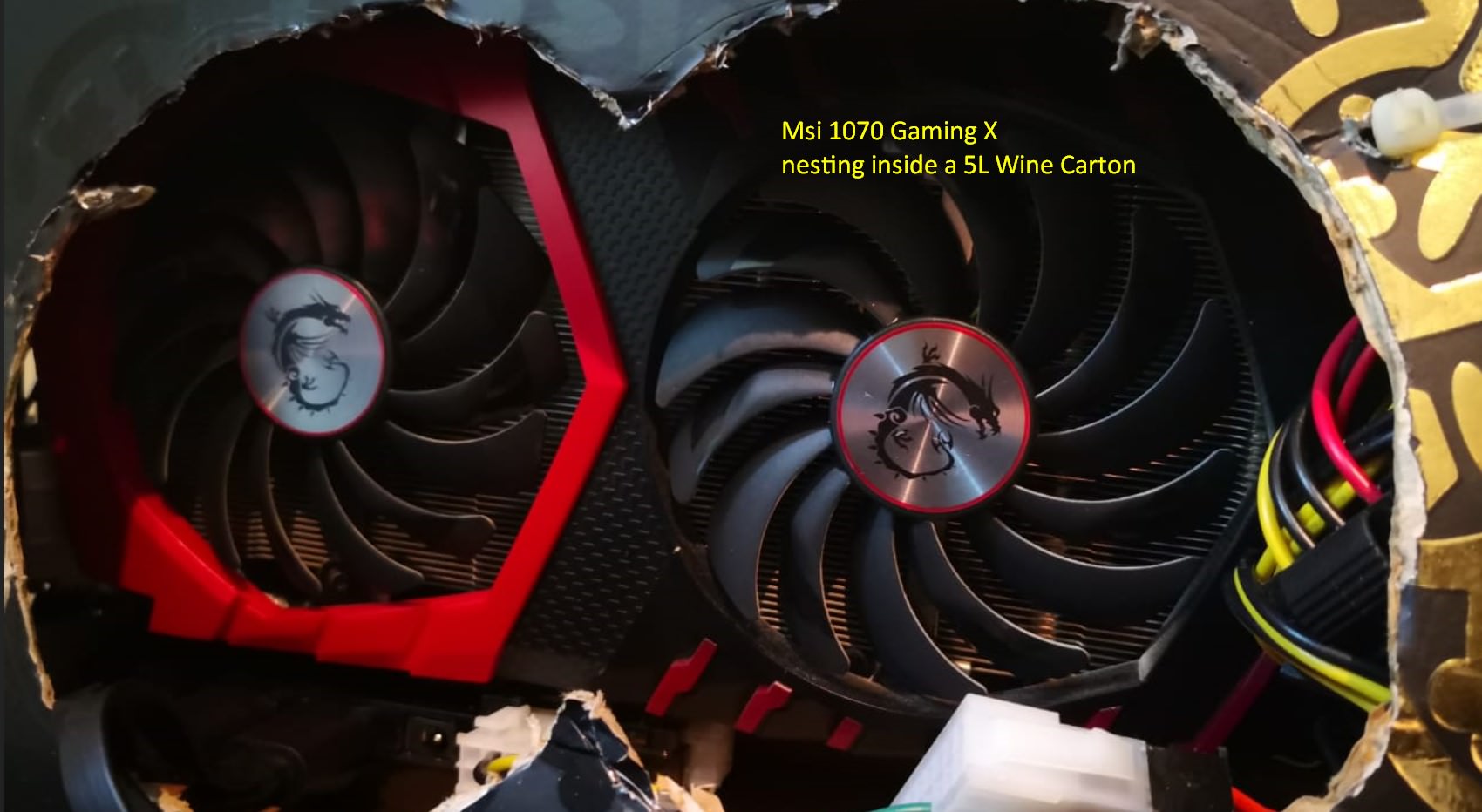 I had used up all of my budgets buying an additional EXP GDC. ( I bought the wrong version earlier) .  For this build, I used :

The pictures are self-explanatory on how it is put together.

I had to remove my M2 NVME SSD to accommodate the EXP GDC.

When I first booted, my 1070 did not start at all.  After some research, I tried turning on the PSU to permanently ON by using steps from this link :
https://egpu.io/forums/expresscard-mpcie-m-2-adapters/mpcieecngff-m2-resolving-detection-bootup-and-stability-problems/

By setting the PSU to always ON, the 1070 is always running.
However, It still didn't work. The 1070 wouldn't even show up on device manager.

Finally, I tried swapping the two HDMI cables that connect the laptop to the EXP GDC dock.
After rebooting, I noticed a new device under display adapters in device manager.

I ran just ModernWarfare 3 on full settings at 4K60 Hz with frames limited to 6ofps. It worked so beautifully. I set the difficulty mode to "recruit" just so that I could take in the beauty and detail of the graphics.

I've never run benchmarks before since I'm predominantly a Mac user. I'll post something this as soon I find it.

Please try not to get the FX504. Or Asus for that matter. The bios is locked down and is not optimised for gaming.

I set PCI express power management to off. Sleep to "never sleep". Even so, the PCIe X4 Gen3 sets itself to 1.1. Only when I start to stress the link, it moves back to Gen3 speeds.
Eg;
When I start modern warfare, my FPS counter shows anywhere between 1 - 50 fps.
I play the game for 2 mins, after which I save, quit and restart the game. At this point, I get 61fps with the frame limiter or 150 - 200 fps without the frame limiter.
Annoying as it may be, I need an unlocked bio to set the PCIe link to Gen3 speeds permanently.

I realise that this article is sparse. Please let me know if I'll be able to add anything to it.

Hello Dennis,
May I see your setup?
I upgraded my setup quite a bit since.

Oh heads up. If the BIOS doesn't recognize your external monitor at first, turn off the PC. Turn it on again and hit f2 a couple of times. It will surely show up then.
Any other problems I can help with, do let me know.

When you get time, Please share your userbench scores. These were mine when I had the 1070.
https://www.userbenchmark.com/UserRun/12041586

Hi yasin. I;m planning to submit my own build guide but since we almost have the same installation I'll post it here instead. So far I was able to play CSGO, PUBG, and HITMAN 2 all on ULTRA settings on 1080p resolution. I'll post more benchmarks later. Cheers!

Hello Dennis,
Good to hear that you are having fun with your 1070ti and the fx504.

Did you manage to put in your post and user benchmarks?
Thanks,
-Yasin

Nice build, I am about to use EXP GDC 9.0b M2 M Key version. May I ask where did you buy it? Is your config still working? Could you be so kind to make a screenshot of Cuda-Z?

@yasinnajib, I know this is a while from when you posted this so you may not respond, but if you do, do you know if it would work with 20 series cards? Also, how did you achieve the hole in the back, did you cut the back of the laptop, or did you do something else?

i just recently bought a 8.0 version