all, considering I seem to be one of the only ones with an XG Station, it’s about time I created an implementation guide.
First things first, everything I’m using:

As this is a windows machine, software wise this setup is easy to work with, well, since I received a firmware update from Asus to add support(TI83 controllers require a firmware update to work on non-egpu certified laptops). If you want some further reading about me trying to get things working, have a look here. 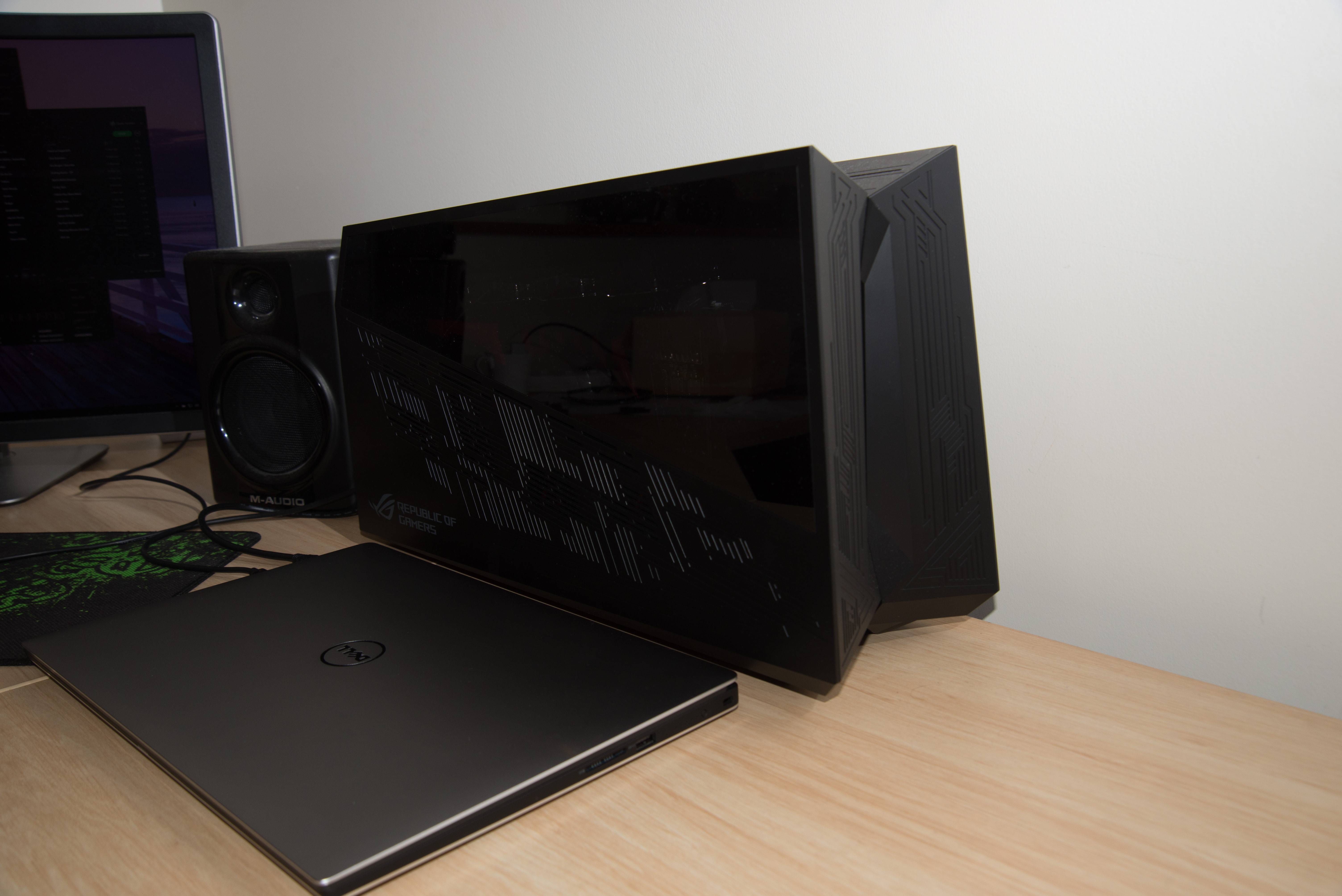 Setup as is, note both the thunderbolt 3 cable and USB type-B. The USB type-B cable offloads any bandwidth used by the USB ports or Ethernet, giving the thunderbolt 3 cable a bit more bandwidth. I have run some quick tests with CUDA-Z, not surprisingly at idle there is no difference, with device to host pinned speeds running at 1338.63 MiB/s with USB, and 1325.11 MiB/s without. When copying a large file across the network at gigabit speeds highlights the difference more, USB allows 1301.92 MiB/s, without leads to 1194.05 MiB/s. This confirms that there is a benefit to the USB type-B cable, especially with a device like the XPS 15 with is severely bandwidth limited. Asus is not just piping all data through the thunderbolt port and doing some magic behind the scenes!

At this point things work well as far as hot plugging goes, in fact the first issue occurred when I went to write this(and lost everything I had!), I was moving cables for photos and couldn’t get display to show on either screens. Otherwise, I am having several driver issues, I generally have to disable the intel iGPU when running the GTX1080, lest I have issues(chromium based browsers have videos stutter with all current intel drivers). An easy fix, but annoying. If anybody has some suggestions here, it’d be much appreciated.

Some more photos below:

And the imgur album I’d uploaded from when I’d first received it.

Another odd thing I’ve noticed, unlike the razer core I had in my possession for a short while, it still supplies power to the GPU when a laptop isn’t connected or off. This means that the LED’s are on all the time, as I sleep in the same room as my PC it is incredibly annoying. I am thinking I might just try and figure out where they plug into the GPU, and just leave them unplugged.

At this point I have only had the opportunity to run Rise of the Tomb Raider through its paces, I will get through some other games over the next few days(BF1, titanfall 2, hitman and dirt rally probably).

This was DX12 everything maxed but FXAA and vsync off with the USB-B cable connected.  For my use case (4k external) this puts me 5-7 FPS behind what reviewers are getting online(some don't state settings annoyingly), which is acceptable losses for me.

I'm very glad to see your setup working and the responses from big manufacturers. Hopefully Intel and other big players take notice and provide more timely support for eGPU.

"The squeaky wheel gets the grease"!

Where were you able to purchase it? Because I cannot for the life of me find anywhere to purchase this, or the Akitio Thunder 3

Where were you able to purchase it? Because I cannot for the life of me find anywhere to purchase this, or the Akitio Thunder 3

The CN tmall and jd.com links to purchase the XG Station 2 are linked from https://egpu.io/external-gpu-buyers-guide-2017/#tb3-enclosures . Those links supplied by jackeyjoe via PM.

Ah, fair enough. Thank you for pointing me in the right direction.

what about fan noise? still running even in low usage(PSU/chassis fan)? how audible?

what about fan noise? still running even in low usage(PSU/chassis fan)? how audible?

Quiet, but it's still there. As far as I can tell the PSU fan runs at all times, the chassis fans are off at idle but it doesn't take much to get them spinning.

Have you had a chance to test the other games that you listed here?

At this point I have only had the opportunity to run Rise of the Tomb Raider through its paces, I will get through some other games over the next few days(BF1, titanfall 2, hitman and dirt rally probably).

what were your findings? Do you think then that an egpu is a definite improvement to the internal 1050 provided in the xps?

Had a lot going on with work, haven't really had a chance to do proper benchmarks. There is a helluva improvement over the GTX1050 though, no comparison. 4k with settings up there isn't much of a challenge for this setup, some tweaking for some games is needed but for the most part you can run them maxed, or close to it. That is pretty much impossible at 1080p, let alone 4k with the GTX1050. I only noticed a tiny performance drop coming from a desktop with the GTX1080 in games(if any), but everything else seems more responsive. Probably some new kaby lake trickery.