System model: Macbookpro12,1
i7-5557U 3.1GHz
Iris 6100 iGPU
256GB SSD
16GB RAM
W10 Enterprise LTSB x64
Dell Dock C3100 USB3.0 (this has Ethernet, USB Keyboard, 3.5mm headset plugged in). I also plug in my Oculus Rift sensors AND HMD through one port by using a USB3.0 hub. When I had put the sensors and HMD in their own respective port, the Rift app shot out warnings about tracking issues. Haven't tested this effectively yet but will report more on it as I continue forward.
Bluetooth Mouse (Logitech M720 Triathlon)
Lenovo LI2264d 1080p Monitor running 75Hz. 21.5". The cable from Aorus Gaming Box to Monitor is a DVI to HDMI cable that seems to work fine.

This ensures I'm usually running CPU fan from 4.2k~5.5k RPM. Once you hit 6K it gets way too loud for my taste. With this setting, 77% utilization load is around 80C max but hovers on a more realistic 74~77c.

Aorus Engine Settings:
Fan speed on this is another important aspect. The card stays warm with 0% fan speed, but it's important for longevity of the card to maintain good temps. 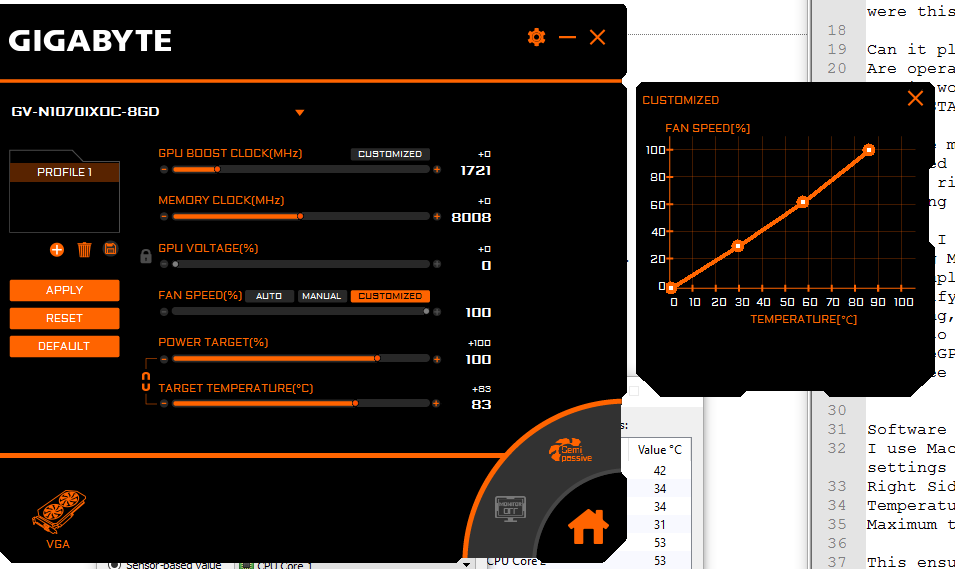 Are my fanspeed steps inside the app. This puts the fan at about 1.8k rpm under load. HWMonitor didn't capture the temperature settings, but I imagine this puts it under 65c

eGPU hardware (eGPU enclosure, video card, any third-party TB3 cable, any custom mods)
Aorus Gaming Box 1070 (USB ports don't seem to work at all). The 1070 is Gigabyte made... small form factor. You can buy it separate if you ever wanted: GV-N1070IXOC-8GD is the model.
Thunderbolt 2 to 3 Apple Adapter
Thunderbolt 2 Apple Cable 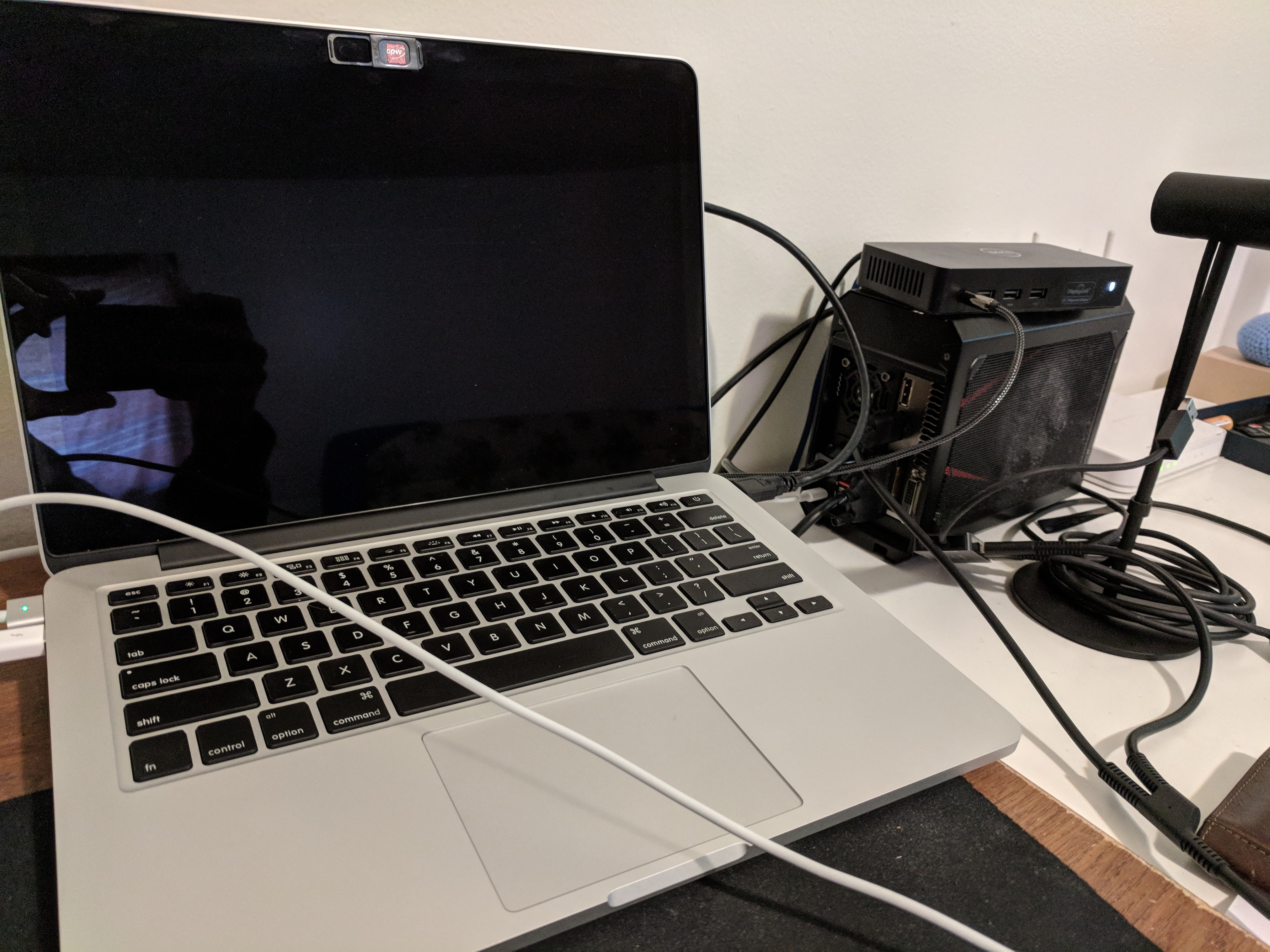 Prior to doing anything eGPU related:
Get the latest nvidia drivers online. Open the installer and unpack the driver. By default it goes to C:\NVIDIA. Take that folder and put it on a USB stick. You will need this later

1. Boot into MacOS
2. Run Bootcamp Utility to create partition. I recommend 65GB at a minimum. Get a W10 iso from Microsoft directly.
3. Install and boot into Windows
4. DO NOT INSTALL BOOTCAMP ASSISTANT!!!!
5. Restart into Windows, and hotplug the Thunderbolt2 cable a little after the Windows logo shows (the spinner should be at the top half or so)
6. Plug your NVIDIA driver files USB flash drive into the macbook and then copy so the path is C:\NVIDIA
7. Once in, go to Device Manager and find Microsoft Display Adapter with the yellow exclamation point
8. Update Driver Software
9. Specify the folder C:\NVIDIA. Ensure "Also scan subfolders" is specified.
10. Drivers will install with the HD Audio and 3Dvision junk, you can uninstall that later.. If it fails, try rebooting and hotplugging again.
11. Reboot and hotplug once drivers succesfully install
12. Once back into Windows, install Bootcamp Assistant. If you lost the drive that has that stuff, simply redo it in MacOS by opening Bootcamp Assistant -> Action -> Download Windows Support Software in the top menubar.
13. You should be good to go

If at any point your eGPU fails to be detected, try doing a hard reset on your Aorus Gaming Box by fully unplugging every cable, waiting 5 minutes, then plugging your video display plug and power back in. Then you can try hotplugging on boot again.

I would check out Macnoob's guide as well. He details the process a bit better than me, but I don't install any drivers on first windows boot:  https://egpu.io/forums/builds/early-2015-13-macbook-pro-retina-gtx95016gbps-tb2-akitio-node-via-tb3-tb2-adapter-win10-macnoob/ 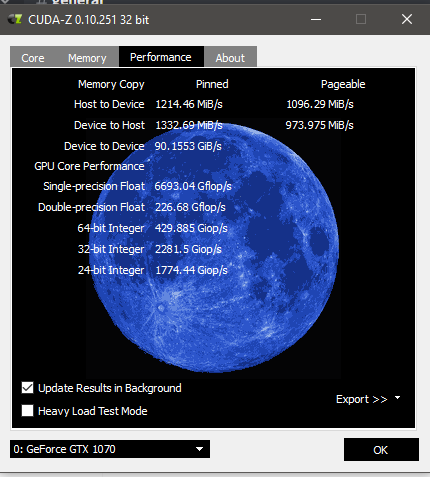 I was also worried about the thunderbolt2 pipe. Pushing to an external monitor is a good idea, and with these it seems realistic to expect. H2D firmware fix is applied. With my Thinkpad P50 under windows, I'm looking at double this bandwidth pipe (don't have a picture offhand), but with a 1070 it didn't matter much since I'm playing at 1080p on screen and Rift's resolution for that which isn't very big either.

Given the above fan and temp settings, these are my benches. I am running the benches with the following apps open:
Aorus Game Engine (to enable fan settings)
Bootcamp Assistant
Macs Fan Control
nvidia stuff I can't close
HWMonitor Pro with logging enabled

I've attached the log files from HWMonitor for the above logs. I didn't run logs for Unigine benches because HWMonitor has a habit of taking too long/crashing when log files exceed a certain amount of time, and also they really doesn't seem that relevant for Unigine.

I'm not sure why but Valley and Heaven reported a different OS name, but same build for my benching. A little weird?

Coming from a Lenovo Thinkpad P50, my primary concerns were this:

Can it play Eleven: Table Tennis with Oculus Rift?
Are operating temperatures realistic? (Anything about 80C is worrying for extended periods of time)
Is it STABLE? No crash and burns, plug n play, etc

For the most part, all of these questions were answered with YES, except plugnplay. The only way for me right now to get the eGPU to work is by plugging in at boot.

Things I want to test, but haven't:
Booting MBP with eGPU plugging in at correct time, then unplugging later and plugging back in even later to verify eGPU will work again
Sleeping, Hibernating working if eGPU was working prior to those states?
MacOS eGPU implementation. Haven't even touched it nor do I see the reason to since app support is abyssmal.

Will probably do a Thinkpad P50 build guide when I have some free time too.

I'm able to attach files now so I added the log files from the above post for Cinemark. Even after compression the Geekbench logs were bigger than the upload limit of 2MB. I just wanted to offer these cuz I know that malwarebytes is flagging that upload site I used (if anyone has recommendations on where to put the files, let me know). 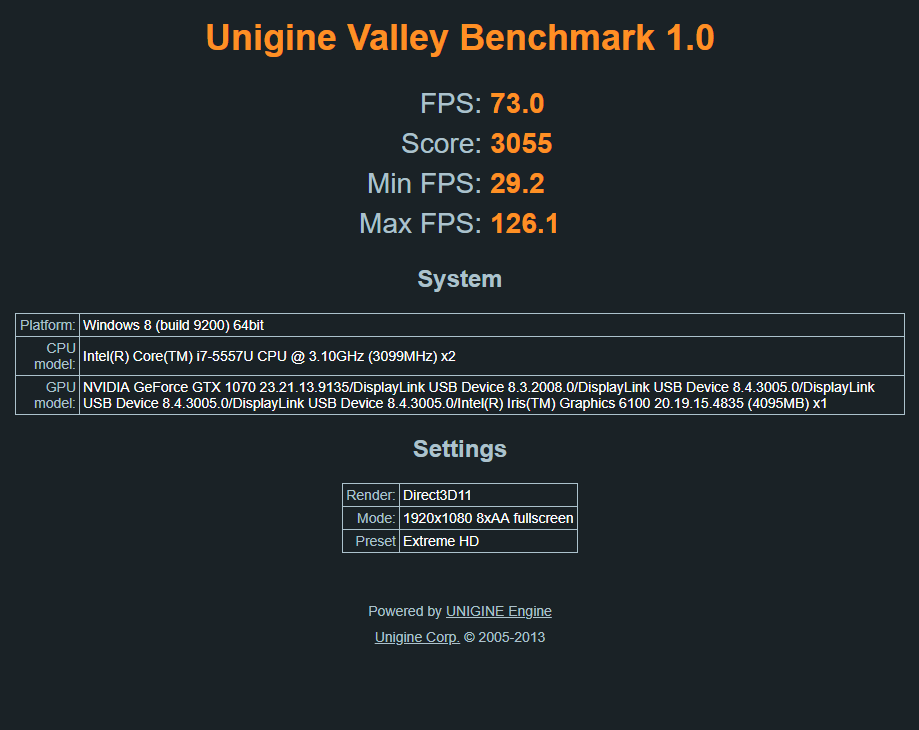 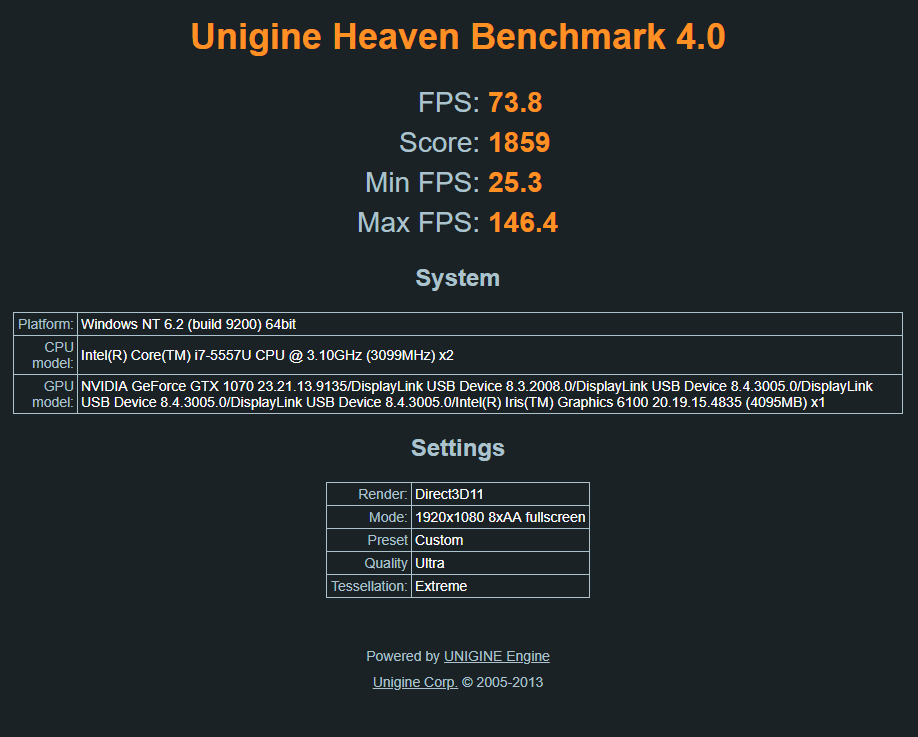 Forgot to mention, I also followed these instructions on getting apple_set_os.efi working.. I don't have an exact guide on setup for rEFInd and this but it's really straight forward.

For rEFInd install I just downloaded the latest installer and ran ./refind-install and enabled running as sudo when prompted. I think you need to disable csrutil before this but not sure as mine was already disabled. There's a good guide on that on the internet I'm sure
For the apple_set_os.efi I just mounted my EFI partition by running "sudo diskutil list" then found the EFI partion and did a "sudo diskutil mount /dev/EFIPARTITIONDISKNAME" then copied the files into a folder called "custom" in both the root efi dir and then the rEFInd directory.. not sure which one was needed but it autodetected the .efi file so I didn't need to edit the refind.conf to enable that piece. I then boot into rEFInd by default, launch the apple_set_os.efi and it does nothing, then boot into windows and it works perfectly.

just confirming you still have to hotplug your eGPU everytime you boot into windows with a esrly 2015 model?

thats what i have to do, and my max FPS on overwatch is 60fps.

just confirming you still have to hotplug your eGPU everytime you boot into windows with a esrly 2015 model?

thats what i have to do, and my max FPS on overwatch is 60fps.

Correct... If I want to use the eGPU, I must hotplug during Windows 10 bootup. I've tested it for about an hour, but this is the only way I can get it to work

I can confirm too. The only way to run egpu on early 2015 macbook pro is to connect the tb2 cable after the first half spin of the wheel or just after the windows logo appears.

hybernate and sleep does not work for me, same for unpluggin and repluggin which takes a reboot

Thanks for the replies.

The lack of hibernate is a pain. I have to change all my power settings to always on.

Occassionally if I leave the computer on for a while, say 6 hours, the screen will freeze and crash.

Thanks for the replies.

The lack of hibernate is a pain. I have to change all my power settings to always on.

Occassionally if I leave the computer on for a while, say 6 hours, the screen will freeze and crash.

Yeah, bootcamp has been a much bigger pain that I had hoped. I'm going to look at trying Windows 8.1 as suggested by some people here, and see how it performs.

I installed Win8.1 x64 pro via a usb stick, totally bypassing the bootcamp stuff... i simply made an exfat partition in MacOS and then formatted it NTFS. Installed windows, plugged box in, installed nvidia drivers using steps in my OP, rebooted, copied over the bootcamp driver stuff (i had copied it a while back) and just installed the most base stuff I could get by deleting all the drivers I didn't need and running setup.

It is still not plug n play from my very limited testing (<30 minutes) but hotplugging during boot is INSANELY easier. If I use rEFInd bootloader, I can plug it in a millisecond before I press enter to boot windows and it works!!! So far 100% out of 3 boots. This is way better than w10 issues i had.

One of the most annoying things I've noticed is that if you try to install the Thunderbolt drivers for 8.1 or 10 they won't launch cuz it's bootcamped. I swear Apple is screwing shit up with this. I think if I never even install bootcamp trash software, I can get that working, and maybe that will allow plug n play? I just don't get why plugnplay doesn't work. I understand not being able to boot with the eGPU plugged in due to macos firmware, but once we're in windows it should work....... I just want to remove all the iris gpu driver junk, bootcamp stuff, and see what happens. I'm actually a bit low on storage now so I need to clean this up and then make a system restore point, remove all of it, and see what happens.

I feel like we can get this working, it's just nobody is testing the full proof method cuz mbp 2015 is known to have issues and not many of us are doing it right now.

Some of us will get fed up and upgrade eventually.

Also I dont have the time or inclination to reinstall windows and uninstall/reinstall drivers.

currently i can play current gen games on Ultra settings and that seems good enough.