This is my first attempt at creating an ultra small form factor gaming PC, currently it is a mess as I am still trying to diagnose issues with the build (there seem to be some severe performance issues).

Apologize for the sloppiness / poor lighting.  I plan on cleaning this build up after I solve the issues with performance. 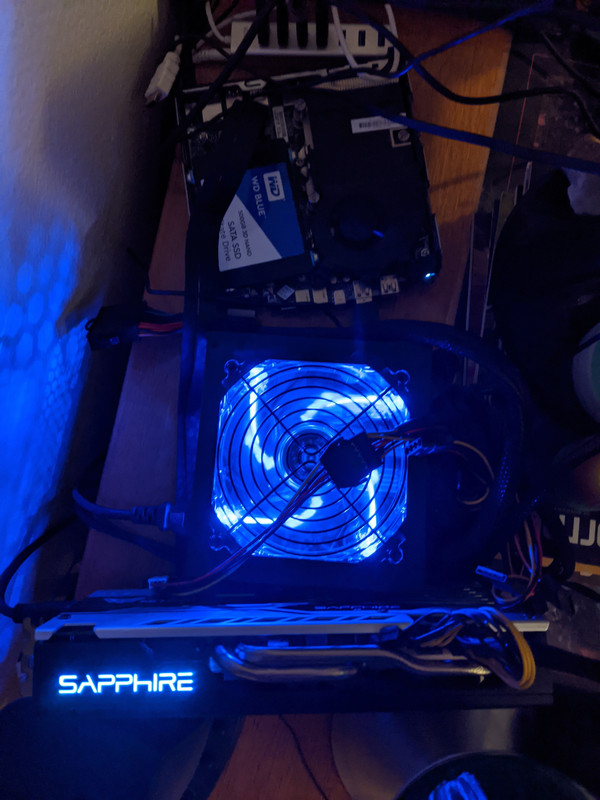 Plugged in the ADT-Link R43SL to the m.2 slot, connected the power cable to the ADT-Link and the power cables to the GPU.  Jumped the 24 pin mobo connector on the PSU. Turned on the PSU, Saphire RX 580 light comes on.  Started the PC and the eGPU setup was immediately detected --> Installed drivers and was done.

I will update this with more later today once I can test, also sorry for the terrible image quality.  I was in a rush this morning and didn't even have time to screencap and email it to myself --

The test results for the Unigine Heaven benchmark seemed quite low to me.  I'm not sure if it's normal or not, as this is my first run on the Unigine benchmark, but there seemed to be quite a bit of stutter and as you can see the frame-rate dropped to 14.9 FPS at times.

Things that I will try once I get home:

I have updated the benchmarks section with the new tests / reports.  The HWINFO64 and AIDA64 tests both look fine, right?  BUT I do see the Intel HD Graphics 530 coming up as the first GPU in both AIDA64 and HWINFO64... time to disable it --> Didn't change anything.

Now, I have tested Unigine Heaven 4.0 identically to pbrunts build / test  since his system was somewhat similar to mine, albeit a better processor (I don't believe Heaven 4.0 is very CPU intensive?).  My result yields only 67% the performance that his result did, so something seems wrong in this build.  Any help, tips, or advice is appreciated.  At this point I am clueless.

Well, I think this report diagnoses the issue... GPU-Z reports the bus interface as PCIe 3.0 x16 @ x4 1.1.  I'm going to try to follow Nando's instructions on dealing with this.

GPU-Z first reported the bandwidth as @ x4 1.1, but now shows at x4 3.0, and I did not press anything.  I was just staring at the report and it suddenly switched (only Chrome open in the background): 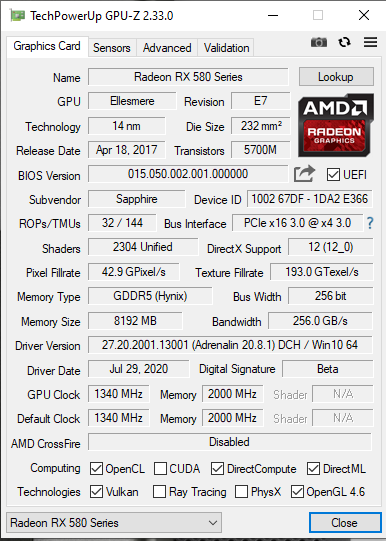 What would be causing this to switch back and forth between x4 1.1 and x4 3.0 like that? Is this normal and expected behavior? 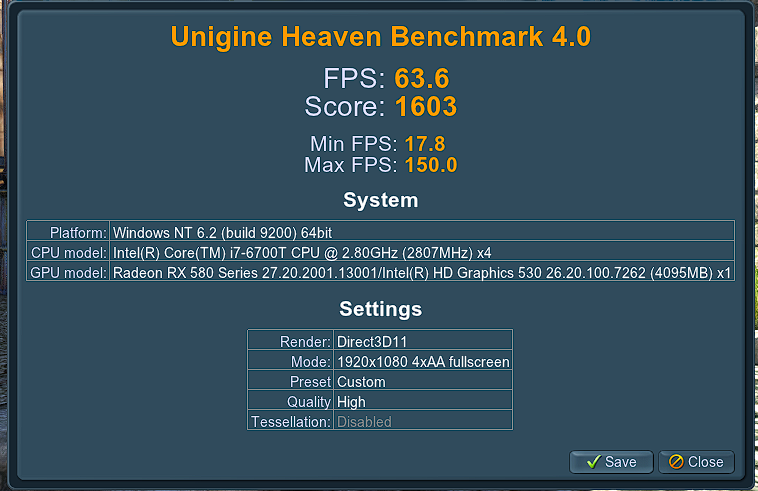 For some reason the average FPS increased by 10FPS... no small change.. very strange indeed.  Something seems to definitely be going on here.

@dashton_peccia, Nice build! AIDA64 confirmed your setup is running at x4 PCIe 3.0. GPU-Z would typically show the resting mode of the connection. I would say to go into Windows advanced power settings and make changes PCI Express power state.

nice experiment. I have the same mini pc, with an i5 instead a i7 and I'm thinking to do the same. I saw a nice build also, with an HP 600 G2 mini, but instead using the M.2 NVME port, it used the M.2 wifi port. The main technical difference is the use of 1 lane of pcie (8Gbps) vs your build using 4 pcie lanes (32Gbps).

I want to use the external GPU in order to improve the streaming capabilites of the CPU, using a gtx 1050 or maybe a gtx 1050 ti with the NENVC codec. Occasionaly I will play, but not it's the main purpose. I use linux (xubuntu). When I want to make streaming, I achive 720p48 with an approx 40-45% of CPU use with OBS. My purpose is to free the CPU of the task of encoding, wich would be done by the GPU.

Did you have problems with this support for the screw of the HDD/SSD case in order to deploy the ADT-Link cable? (Because it's just in front of the NVME slot, and also if you are using the NVME port, you need to use the SATA conector with a HD/SSD).

@dashton_peccia, good to see another sff desktop build here! ( more than an attempt if you ask me 😛 )

PCIe x4 1.1/3.0 in GPU-Z is the same behavior with my Deskmini A300 + ADT-Link R43SL, you can press the question mark button (PCI Express Render Test) to put some load on the card and avoid resting mode and get it reported properly at any time. cheers

So did the power settings end up saving your FPS? And did the NVMe port on the mobo reliably work for gaming through the adapter/GPU?