The first week of April has been insanely great for Mac users. Apple apologized that its Late 2013 Mac Pro trashcan failed to meet users' needs. It vowed to completely redesign its next Mac Pro to make up with its core user base, the creative professionals. Two days later, Nvidia announced a beast of a graphics card, the GTX Titan Xp. It subtly dropped the news Pascal drivers for macOS would arrive within a week to support this new GPU and a whole host of GTX 10 series graphics cards.

We prepped our Mantiz Venus Thunderbolt 3 external GPU enclosure with a GTX 1080 Ti then hooked it up to a Late 2016 15" MacBook Pro. Everything was ready to go pending the web drivers from Nvidia. April 11, 2017 marked an 11-month wait for Pascal driver support in macOS since the GTX 1080 release on May 27, 2016. This was a much longer delay than the previous seven-month wait for Maxwell drivers. All was forgiven though. Nvidia web drivers 378.05.05.05f01 are here, and they work with some visual glitches with Goalque's automate-eGPU script to enable GTX 10 series eGPU support in macOS. This is the beta version of the drivers and hopefully these glitches will be remedied by the time the Pascal drivers are finalized.

There have been many questions and concerns about bottlenecking on eGPU implementations. Before we discuss the CPU performance, let's assess the full path the GPU travels via the external enclosure to accelerate your ultrabook. This is a typical channel for how the external GPU communicates with the CPU:

Maximising TB3 eGPU performance: TB3-CPU vs TB3-PCH, how many PCIe lanes are attached?

The past five months have taught us there are frustrations in selecting the right components for your eGPU build to get the most performance. Some notable issues we’ve discovered include the 2x PCIe lane cripple with the majority of the Dell XPS line, the TI83 enclosures’ firmware Host-to-Device half-speed limit and Intel’s Thunderbolt 3 fine print (pg6) which states Thunderbolt “DATA” (i.e., PCIe traffic) is throttled down to 22Gbps. Our reports have prompted Dell to clarify its XPS laptops PCIe lanes and have encouraged external GPU manufacturers to push Intel for firmware updates.

To get the most out of an eGPU setup, you should start with a computer that is a good Thunderbolt 3 host. From the limited resources we’ve gathered to date, the Late 2016 15″ MacBook Pro is currently the best host for external GPU implementation. We found Apple attached the PCIe lanes directly to the quad-core i7 CPU in the newest 15″ MacBook Pro laptops.

This is unlike the majority of Thunderbolt 3 laptops which route the PCIe lanes through the PCH. The disadvantage of having the Thunderbolt connection through the PCH is that the PCH shares bandwidth with other internal components (e.g., PCIe flash storage, network cards, USB ports) and potentially limits the eGPU performance. Nando prepared this table explaining max bandwidth for eGPU usage on the Late 2016 MacBook Pro.

We wanted to test the GTX 1080 Ti Thunderbolt 3 eGPU with the Late 2016 15" MacBook Pro to present a best-case scenario performance wise. We are using an AKiTiO Node and a Mantiz Venus TB3 external GPU enclosure for these tests. We also have a full comparison on different external enclosures in our eGPU buyer's guide. The Unigine tests were run through the MacBook Pro's internal display via the ghost HDMI adapter. Here are our initial findings:

It's an exciting time for our eGPU community. Apple is beginning to take steps in the right direction to address the power and performance needs of its pro users. At the same time Nvidia is expanding the selection of graphics cards available for eGPU implementation on Macs.

I can not successfully install automate-eGPU.sh in 13" MacBook Pro 2016 with AKiTio Node plus GTX1070. Did I do something wrong? Could you please write the steps for us? Thx a lot.

What was the error you saw when you ran the automate-eGPU script? What does it look like in Graphics/Display?

The Firmware Version 21.1 for your Node may be causing a problem here. After the latest April firmware update, the Node reports 25.1. When and where did you acquire this AKiTiO Node?

I have 15" MBPtb with RP460 | Razer Core | GTX 1080. I did TB3 enabler and automate-eGPU script. It detected the GTX1080 and installed 378 webdriver. I reboot after running the script and it's not detecting the GPU. What am I doing wrong?

I don't have experience with the Razer Core. The newest Nvidia web drivers are still glitchy. I'd recommend rebooting your MacBook Pro with the eGPU attached and see if it will eventually work.

Could you possibly post benchmarks while running on an external display via eGPU with the internal monitor disabled?

Updated with benchmarks through external display. I need to get a 4K display to test this setup at higher resolutions.

Many many thanks for that! The improvements over the internal display-only setup are quite remarkable.

I would presume that you accelerated the internal display with a headless HDMI adapter?

Can you run heaven with the settings like in this results in Desktop PC for the performance drop thread? : 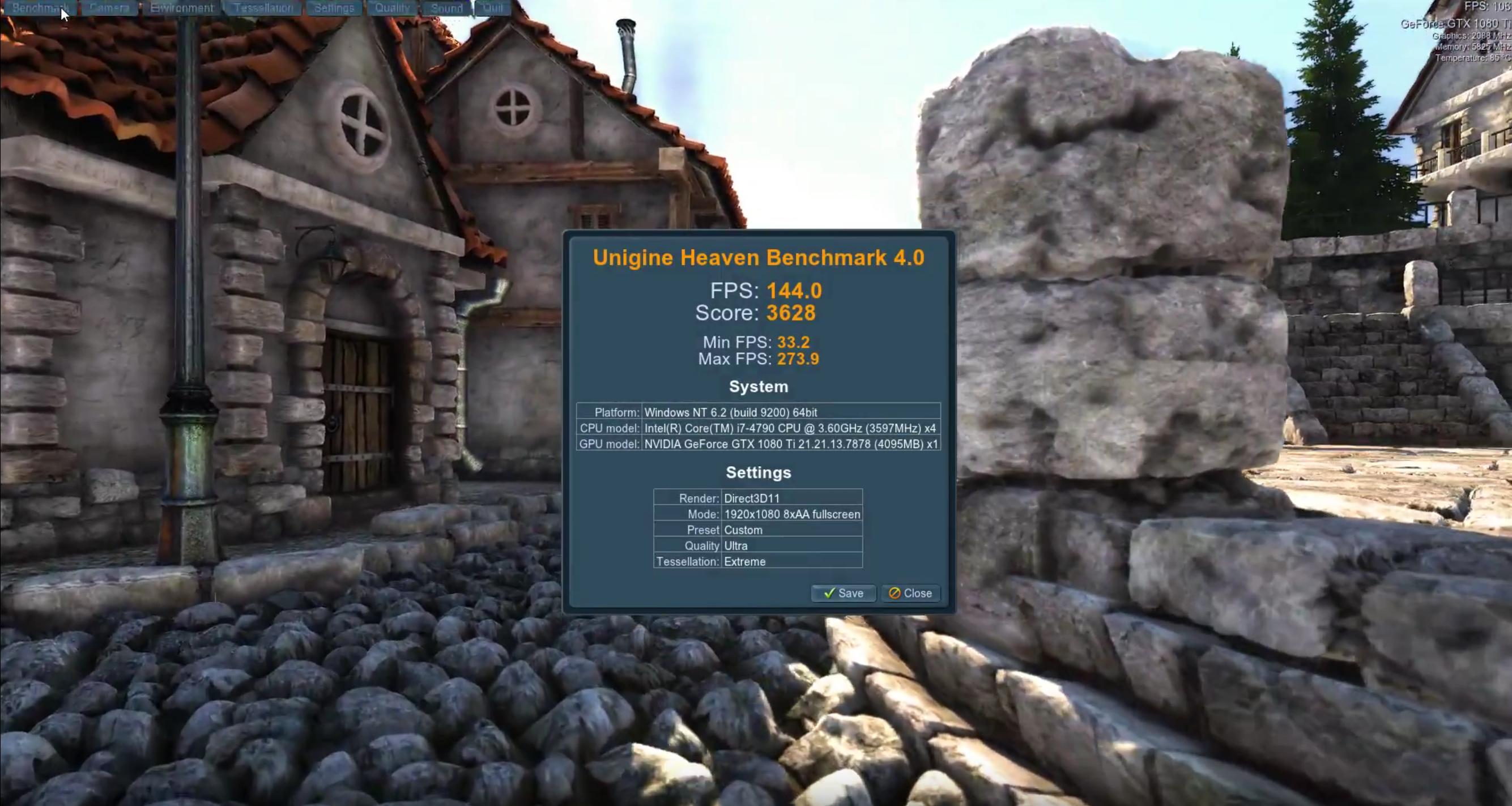 of  3
All forum topics
Previous Topic
Next Topic