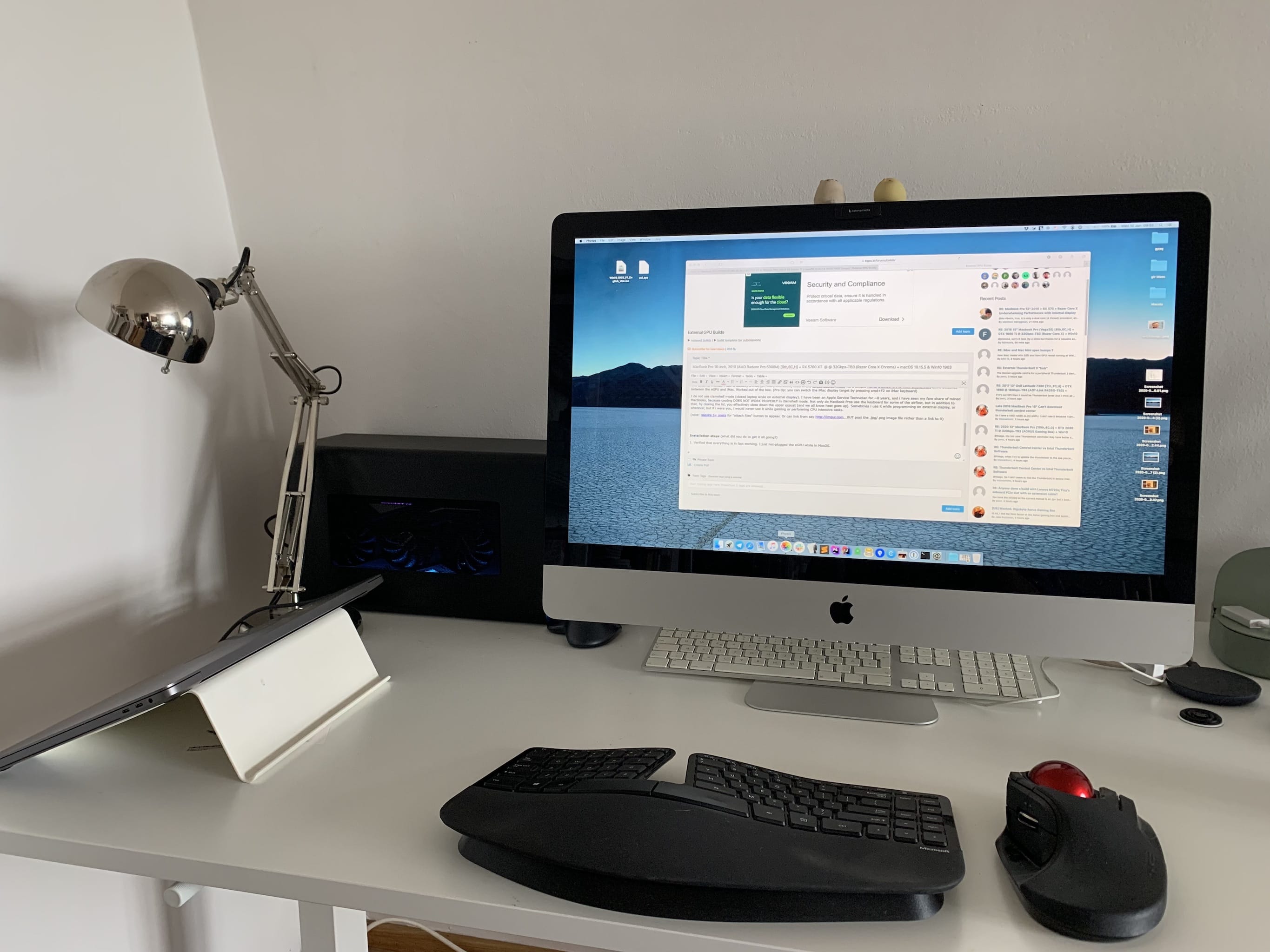 While i waited for the Razer to arrive, i read so many posts here that i got really paranoid and almost ditched my macOS needs and switched to Nvidia. I am very glad i did not do so. Against all odds and comments here, everything literally worked plug and play. On both macOS and Win10.

This guide by @itsage was the one i followed in full detail.
The steps are basically the same, but i will try to write down in a bit more detail. We do not use any modifications for Win10, the bootloader, nor do we disable PCI slots. An ideal setup for me. 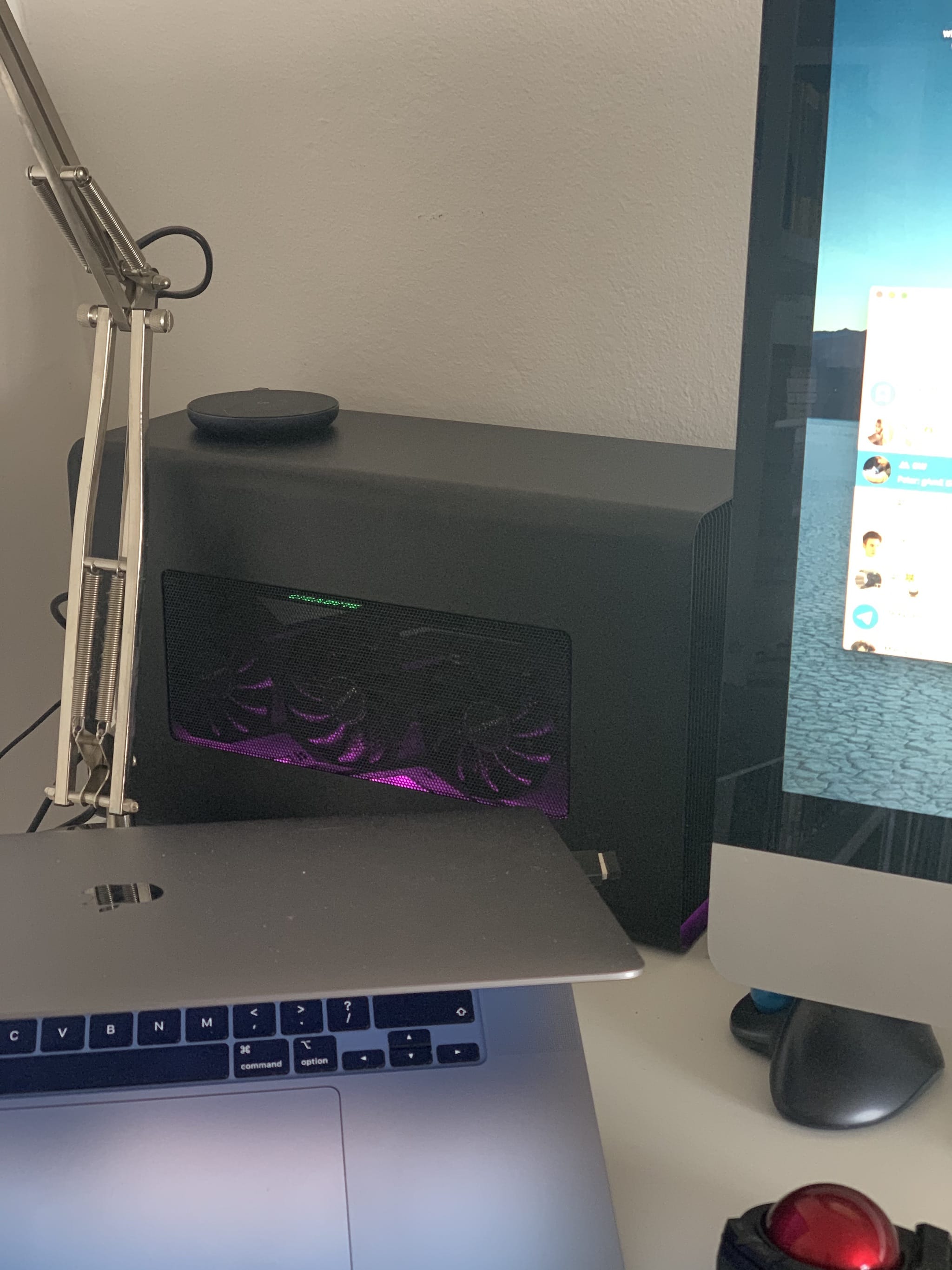 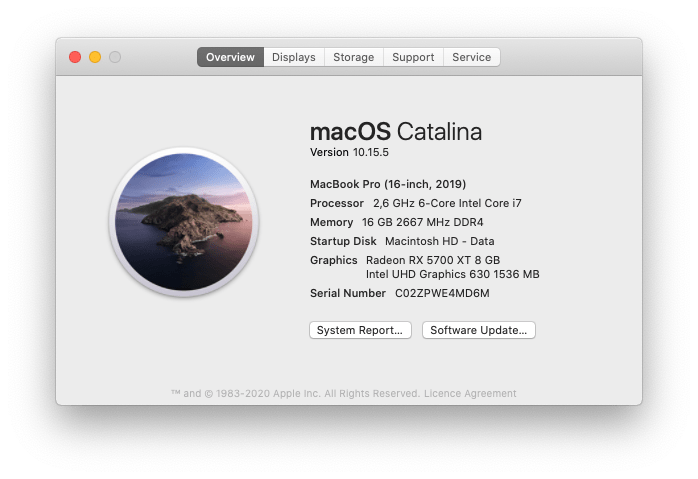 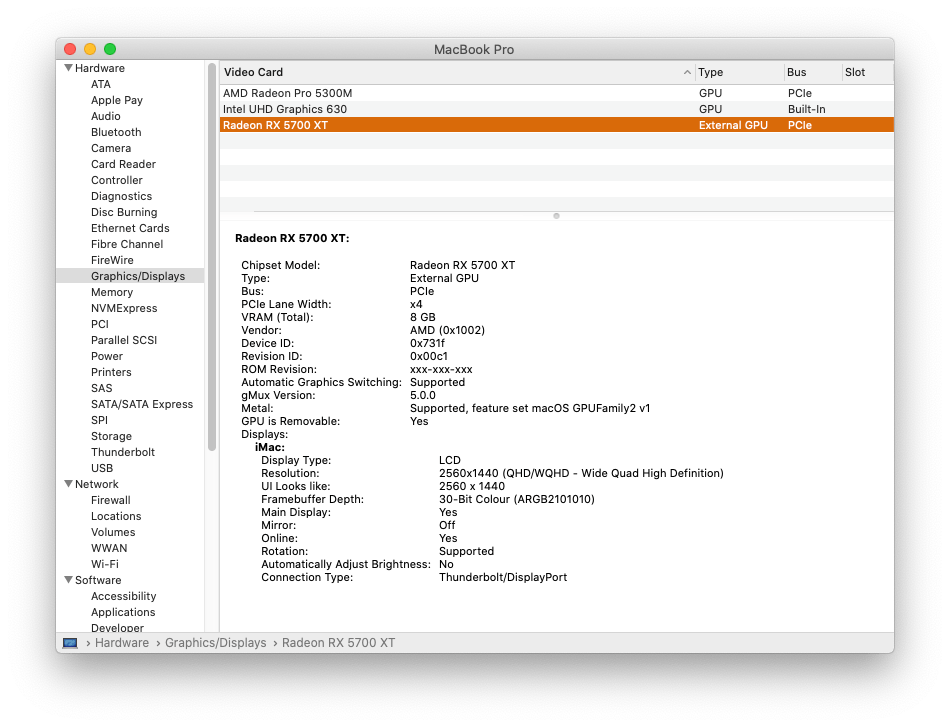 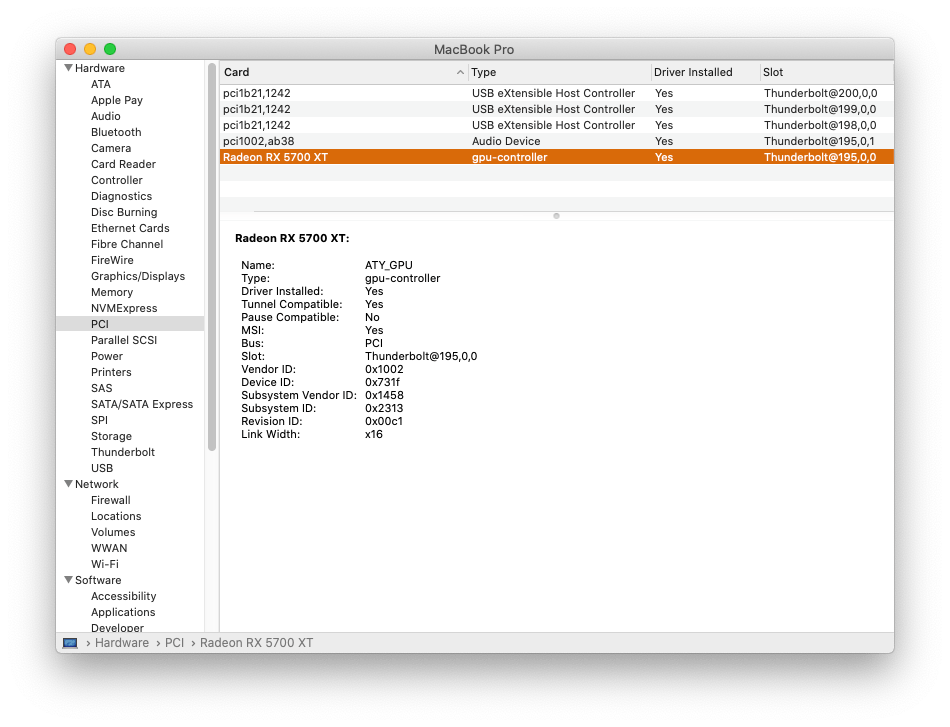 Port Dance? There was no port dance whatsoever. So far, the eGPU works in cold plug and hot plug mode, in both operating systems without any issues.

Might attach later. Sorry, but i'm not really into benchmarks. Tried to answer it in my own words in the Q&A section below.

Q: I see two monitors in the picture. What is the exact setup?

A: I use the system with both internal and external monitors. Depends on the use case really.
The external monitor i use is actually a iMac (27-inch, late 2010) used in the target display mode via a simple Hama DisplayPort to mini-DisplayPort cable attached between the eGPU and iMac. Worked out of the box. (Pro tip: you can switch the iMac display target by pressing cmd+F2 on iMac keyboard)

Q: Since you are using a monitor that supports audio, and DP... Does it work?

Q: In one of the pictures, the laptop is closed. How does that work?

A: When you have an external mouse or keyboard attached, and close the laptop, Macs go into what is officially known as a "clamshell mode", and turn of the internal display. I do not use clamshell mode. I have been an Apple Service Technician for ~8 years, and i have seen my fare share of ruined MacBooks, because cooling DOES NOT WORK PROPERLY in clamshell mode. Not only do MacBook Pros use the keyboard for some of the airflow, but in addition to that, by closing the lid, you effectively close down the upper exhaust (and we all know heat goes up). For example i literally had a case where the keyboard keycaps melted while the guy was playing Fallout 3. Sometimes i use it while programming on external display, or whatever, but if i were you, i would never use it while gaming or performing CPU intensive tasks.

A: I don't do benchmarks, so i wouldn't know, but off the bat, its snappier, WoW runs at 117fps solid at ultra, Squad at 60fps, CS:GO is solid 240+. Apps that use video encoding like Adobe suite or Adapter for Mac, or even image encoding like ImageOptim, run significantly faster. Significantly. The overall feel is that laptop is kind of cool at all times, and rarely spins up the fans. By looking at the stats, seems that the dGPU and iGPU do nothing most of the time, and i guess no heat then...

Q: How is the fan noise?

A: I'm a little bit biased here. I use an iMac for a display. Nothing the Razer can do can match the awful sound of imac cooling itself. That being said, it still might be early to tell, but i have only heard the PSU fan spinning once so far and its really not that bad, its way lower noise levels than a MBP would usually do. The GPU fans are silent.

Q: Have you tried running it on existing Windows?

A: Yeah, in fact i did. I had a fully updated 2020 Win10 on an external USB drive. It was weird i must say, it did not recognise that i plugged in anything at all. No devices in DeviceManager, no plug in sound, literally nothing happened except that the laptop was charging over the connection. I did not care much for the Win, so i just installed it anew, but i am confident that my Thunderbolt drivers were corrupt, and that caused it to work as USBc instead. We will never know...

A: I like cold plug better. other than that, it really seems to make no difference, it works both ways.

A: Razer has its own software, and after install it worked normally. I turned it all off. Issue is that it only works on windows. Also GPU has some rgbs that seem to be in sync with razer, but i cannot control them individually. I guess gigabyte has their own software?

@marko_mitranic, Excellent build! I got confused for a second seeing an iMac and the 2019 16-in MacBook Pro was not quickly visible. Nice work getting this setup going in both macOS and Windows.

Its a very good BTO i7 machine as well, but unfortunately, Apple started their usual "10th year deprecation wave" on its generation, so slowly it is becoming unusable. The inability to run newest Office, Docker, WoW, FinalCut etc is overwhelming. The funny thing is, if i install Bootcamp or Debian on it, all of the mentioned work fine, even tho in macOS Apple claims that "obsolete hardware" or "unsupported CPU family" is the culprit. 🙁 The real reason why they decided not to support newer OS, or certain APIs on the machine remains elusive.

So nowadays i use it as a great main screen via a simple $15 eGPU/DisplayPort-to-miniDisplayPort cable. I have a mDP-mDP cable for my tb2 laptops to connect as well.

Hey Really great tuto. I have exactly the same setup.
I've followed every step. Step 9->driver is installed. graphic card is recognized.
IF I reboot the window menu appear but without the possibility of entering my password. My MBP keyboard is not responding.
If I don't reboot I can play games on a external monitor linked to the razer without problem but after that If I reboot again same problem.
If I reboot without the razer plugged, I can enter windows no problem but If plug the razer, graphic card is not recognized anymore.

I have spent hours triyng to make it work. Can you help me?

@thierry_huart-eeckhoudt, i have read on the forum that plugging into the lower left side tb port is the best. No idea, you should try.

Could you explain is a bit more detail? From what i gathered, a hotplug works for you, but a cold one does not?

Also do you see both graphics cards in the device manager? What about adrenalin’s Display tab?

Update after a couple of days of heavy usage:

@marko_mitranic, thank you!! This worked perfectly on my 16 inch MacBook Pro with the 5500m. Have had the error 12 for a long time and this basically made boot camp much easier to use since I can cold plug the eGPU with my dock and stuff.

@marko_mitranic, thanks for your description, for now it looks like most stable solution, works like a charm!