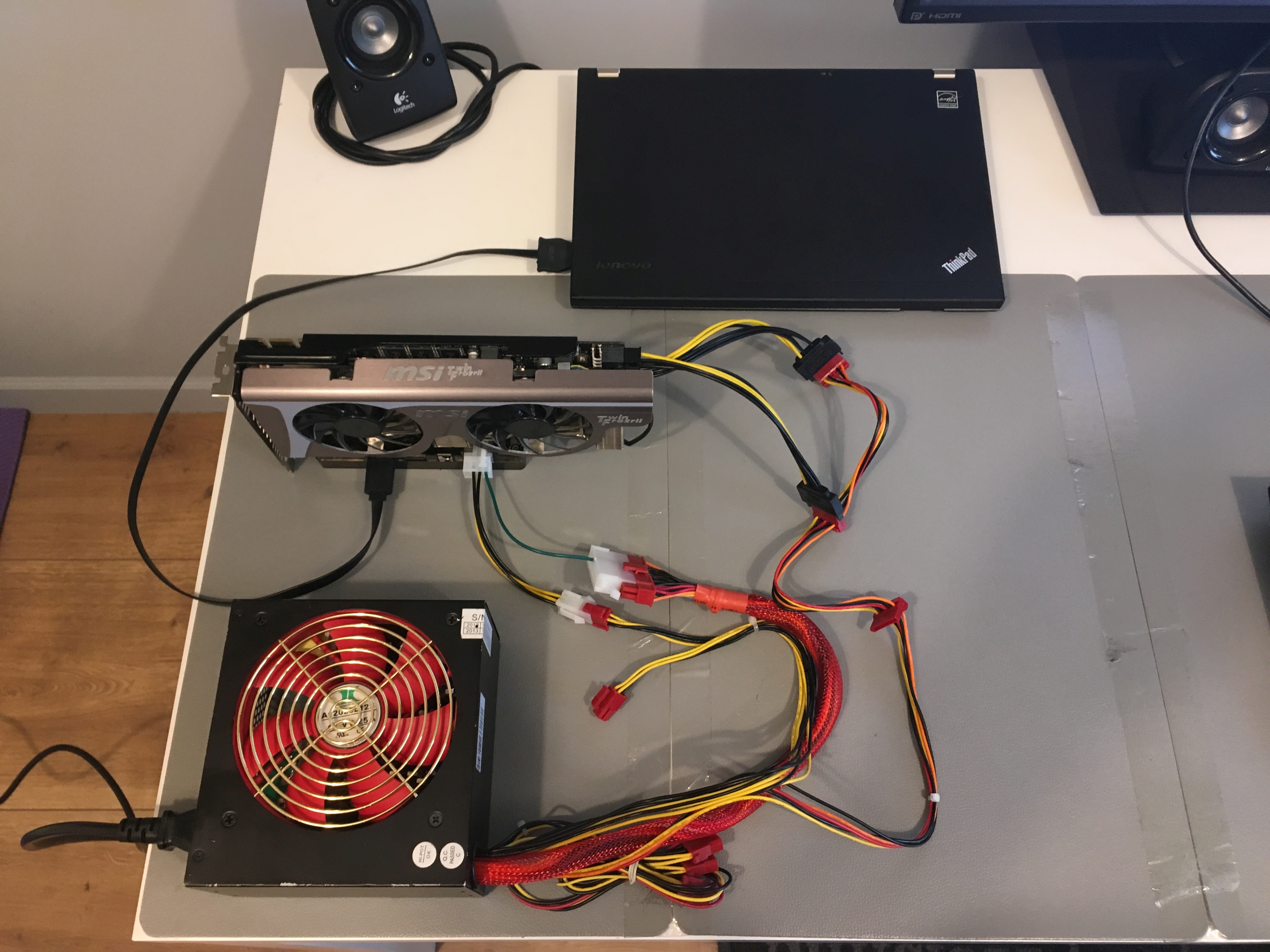 These are all the steps and problems I have encountered during my testing with the eGPU adapter and both GPU's. At the top, you have steps valid for both GPU's and at the bottom, I will describe steps specifically for the 560 Ti and 1080.

I did not do any benchmarks for reference but I have tested the performance only in World of Warcraft. I have gained 30-50 fps on 1080 and increased the graphics settings from 2 to 7.

After all this experience and the performance boost, my future plan is to buy the Dell DA-2 PSU and the NVIDIA GeForce GTX 1060 6GB Mini and build a custom frame for transportation. If my research is correct the 1060's power consumption is "only" 120W, which the Dell PSU should manage. On top of that, you will need this cable to connect the eGPU adapter to the GPU's 6 pin PCI-E power connection.

Hope this post gives you all the input you need for your eGPU journey.

How do you get Lenovo to recognize there's another GPU besides the dedicated Intel HD.

That's the basic problem where I'm stuck right now, because in BIOS there are no graphics options..

I setup my son's egpu system in 2019 on Lenovo X230t running Win 10 with Manli Gallardo GTX 1060 using the same steps EXCEPT hooked up monitor using DVI port (that's all his monitor had).

For months he would wait until Win10 logo appeared before plugging in the DVI, otherwise the boot would hang.  It was a minor task to plug and unplug the cable from the GTX but he got used to it.

A month ago my daughter decided she also wanted an egpu so I went thru the same setup steps), except this time I hooked up her monitor using the HDMI port.  She has no need to wait for a Win logo to appear and there is no hanging when the monitor remains hooked up.

Thought this was peculiar so I switched out son's cable to hook to HDMI port on his card, stuck a DVI to HDMI adapter on his monitor and voila, no hanging.  But the next day it started happening again.

Uninstalled his NVIDIA driver using Display Driver Uninstall mentioned above, reinstalled it in safemode, ran the error 43 bat file.  Despite all this, still getting the same boot problem.  He connected his laptop to her setup and still the same problem there too.  They both have the same exact equipment EXCEPT - daughter has a clean install of Win10 after a bad restore from backup whereas son's laptop retains its original Win 7 with Win 10 system slathered on top of it per forced update by Microsoft.

This hybrid system of Win 10 over Win 7 was a problem when restoring from backup files which is why my daughter (and my) computer had to start fresh with clean Win10.  Our system had been irretrievably damaged by the effort to restore backup files in the hybrid system.

So my guess is this booting problem could stem from the hybrid system setup but I'm not really sure.  Suffice it to say, we have no concrete answers as to why it boots up fine for some systems but staggers for others.

@john_chang_1, If you did everything correctly, you should find an additional display adapter in the Windows device manager after powering it on.

@lily_wang, I would recommend doing a full backup (including partitions and MBR) with Acronis or another tool and wiping one device and install a fresh Win 10 on it and see if the glitch still occurs.

I am trying to  replicate your build. I updated my x230 to Win 10 and now the expresscard port no longer works.

Is this the driver you are using?

Did you have any problems with the port?