Calling this external is a bit of a stretch because of how I am using it, however since it could be ran externally I'm going to say it counts. (nando if you want me to do any specific benchmarks, or run aida64 with non plx gpus, let me know)

I ran out of pcie slots on my computer with all my devices and didnt want to downgrade my gpu to x8, and I also wanted to have the option to upgrade motherboards in the near future when everything transitions to pcie 4.0 and motherboards like mine with a built in plx chip wont exist any more
as soon as a friend mentioned the existence of these adapters I knew I had to get one

long story short a plx chip takes 1x16 connection and splits it into multiple full bandwidth x16 connections (in the case of this linkreal card 2) when both devices are active it shares the bandwidth between them evenly, however the likelyhood of that is low if you just have 2 devices (also if you are running multiple gpus in sli they can directly talk to each other through the interconnect at full bandwidth too, so people wanting to run egpu sli take note, its your last chance before its entirely gone next gen)

it uses standard mini sas hd cables per each pciex4 connection, and in this scenario I ran them around the side of my case then back into the top section where my pcie devices are.

Spoiler
image with just the pcie devices in (no adapter) 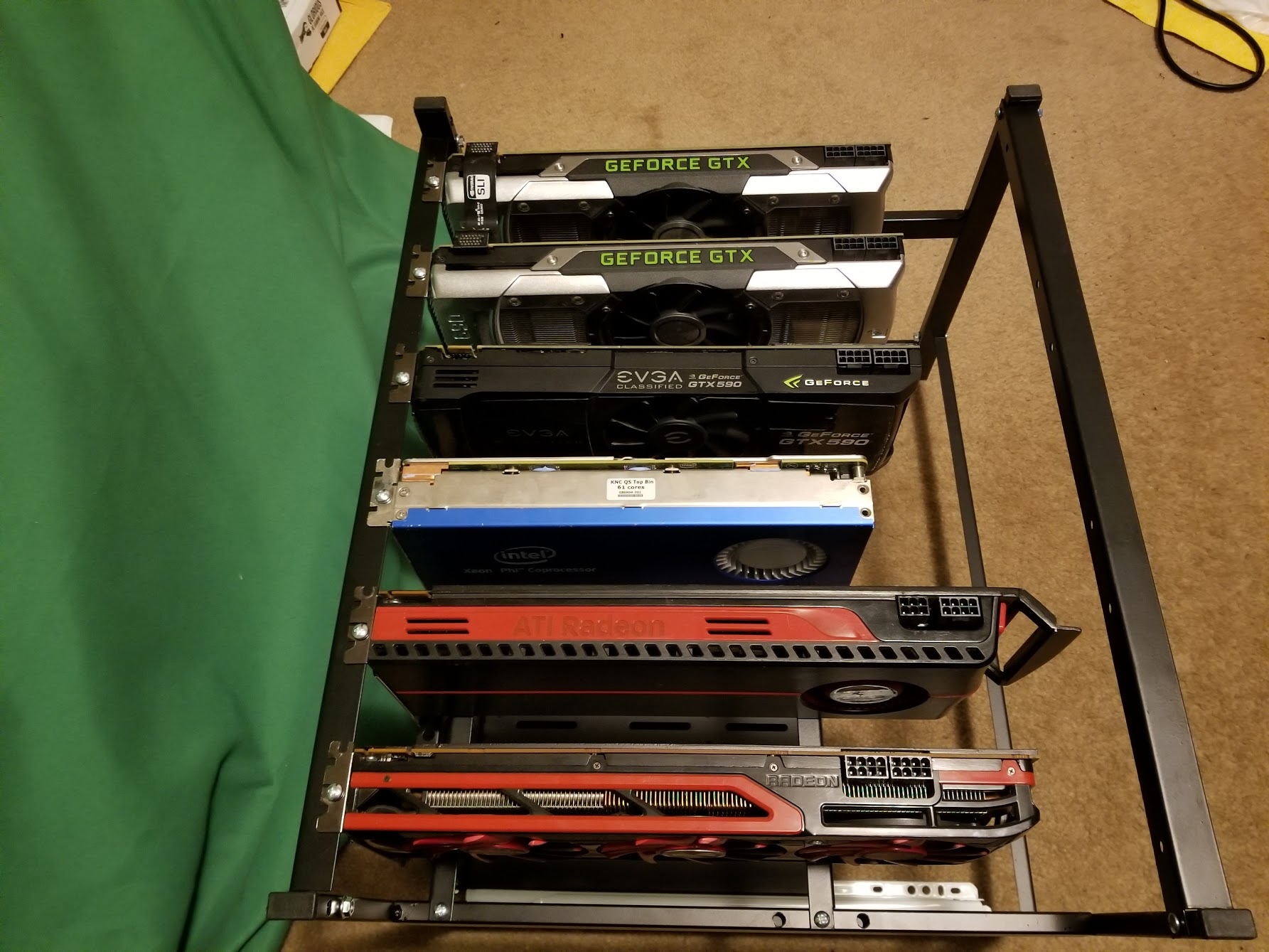 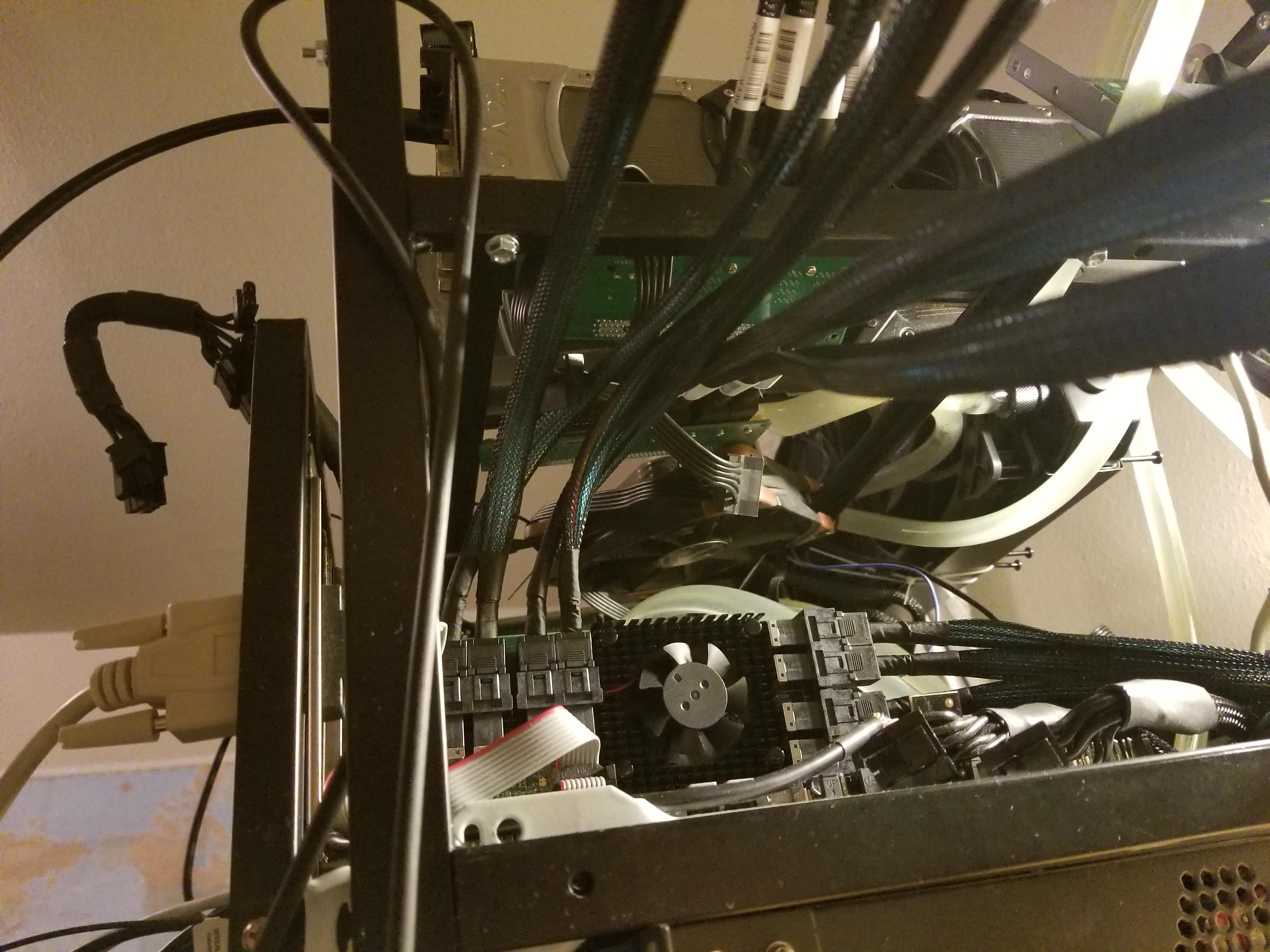 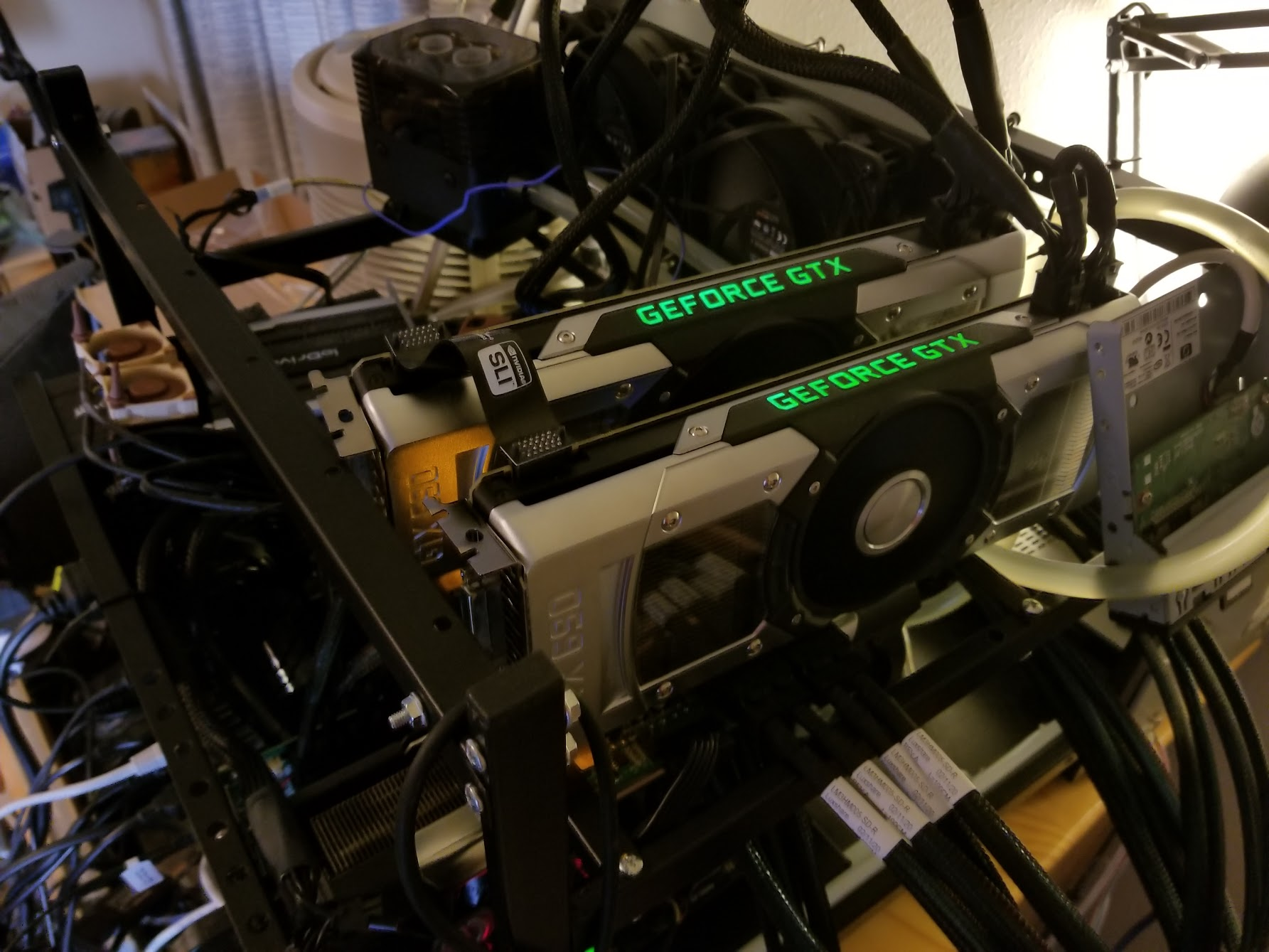 In the background of this image you can see the cable spaghetti and the iodrive which requires an x8 link otherwise it doesnt boot.

I cant screw them down otherwise the cables will bend a ton, and i cant move them further to the left because my radiator is too long (but this will work just fine for regular pcie devices.)

rest of the images of my build
https://imgur.com/a/CI9QwTI

i also later replaced the fan on the card with a large passive cooler from a 8600gt passive and a thermal pad because the fan has an extremely unpleasant whine.

Spoiler
operation remove whiny fan
first i tried a much smaller heatsink simply ziptied on but it warmed up way too quickly for my liking.

so instead i looked around for a gpu cooler that might fit, and i found none, however this asus passive 8600gt I found seems to line up 2 of the screw holes (not the same screw holes the gpu itself uses)
I mounted it with extremely thick thermal thermal pads so that I couldnt put too much pressure on the card, and it seems to be working fine. 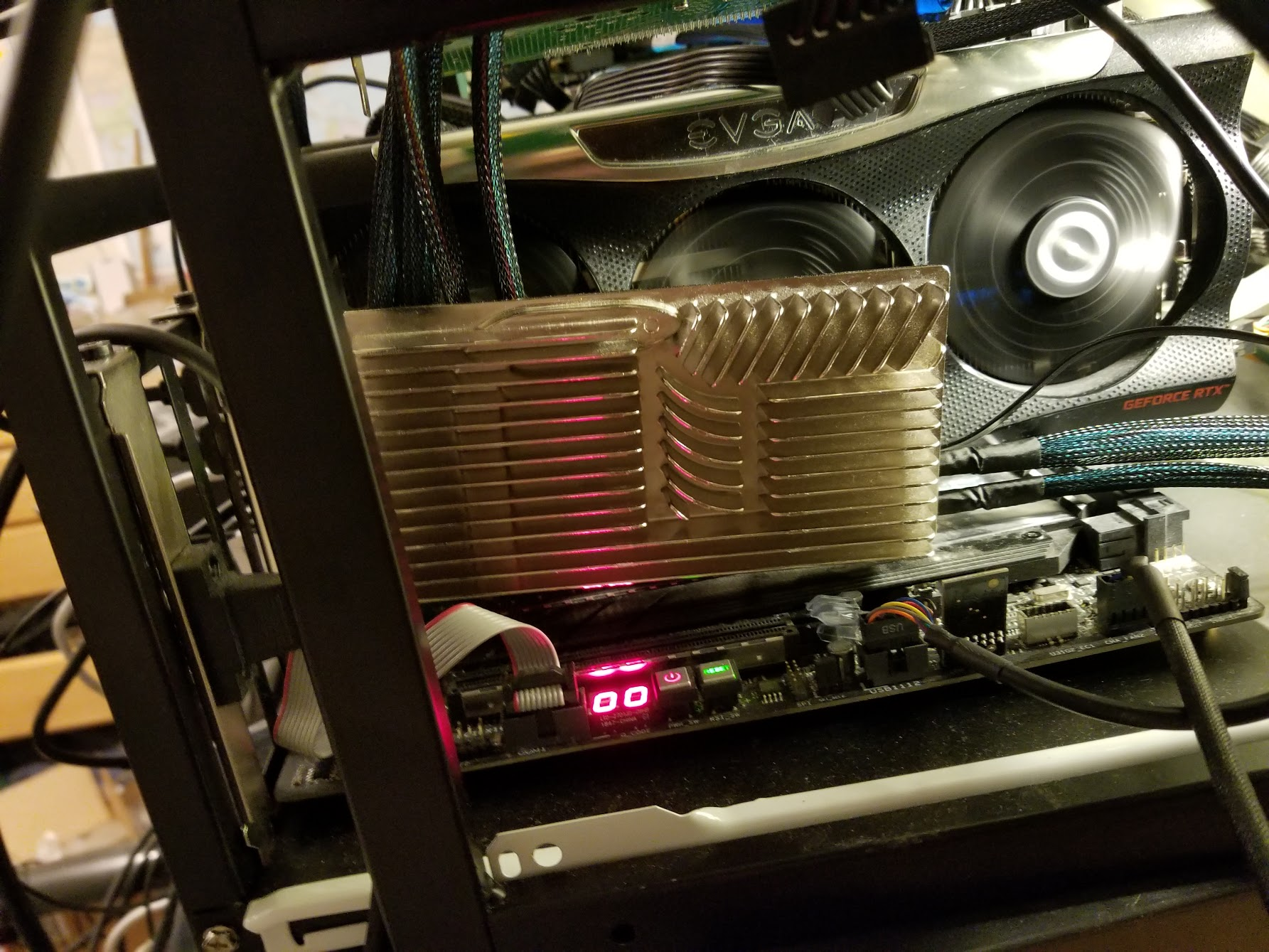 plug and play if you follow the diagram in the imgur link provided by linkreal, they might give you a different diagram but that seems unlikely to me. do note they have to configure the device to the port layout for you if you dont want to deal with the nonsense I'm going to include at the end of the post.

the plx adapter adds 125ns of delay (I have no way of verifying that but that is what the datasheet says) which is entirely imperceptible and has zero impact on performance to such the extent that people have included it on motherboards for years
I tested with my 2080ti (no problems) 690 (no problems) 7990 (same problems i had as when directly attached to pcie) fusion iodrive 2 duo (the device which requires 8 lanes of pcie, and has no trouble running using this card)

The intention was not to make an egpu enclosure, I just wanted to connect a bunch of pcie devices, some of which have lane count requirements (thanks Fusion-io) and a plx chip allows you to use a device with a minimum lane count even if you dont have the bandwidth. my final setup will be 4 pcie x8 slots coming from my motherboard's second x16 slot, however I had to test to make sure the plx bridge was working and thought i might as well send a benchmark here where I was first made aware of these port multiplier bridges in this post https://egpu.io/forums/builds/2012-mac-pro-51-cmp-gtx980ti-3x-gtx780ti-cyclone-microsystems-backplane-host-bus-adaptor-win10-or-os-x-10-11-6-el-capitan/ (the link to the enclosure was normal pcie bridging, but the cyclone backplane splits the incoming x16 into 80 pcie lanes.)

Finally how to change the port mode of the plx chip (for if it doesnt automatically switch between x16+x16 and x8+x8+x8+x8) if its stuck in x8 mode the gpu will run at x8 speeds)
(should work for the pex8747 and 8749) if you dont know what you are doing, get linkreal to set it to the configuration you want when you order, and they will provide wiring diagrams (be kind and patient they are a small company)
I also wanted to post here how to get the plx sdk (version 8.0) running on windows 10 in case someone else has the same trouble launching it that i did.

and it wont run because broadcom still hasnt resigned the driver properly for windows 10. (as of january 12 2021) I did ask them to update it but so far nothing

to get it to run you have to edit the registry to allow cross-signing (error 577) : in HKEY_LOCAL_MACHINE\SYSTEM\CurrentControlSet\Control\CI\Policy create a DWORD named UpgradedSystem and set it to 1, reboot

then please ask linkreal what to do because it might be different for your card, but here are the instructions they gave me
https://imgur.com/a/44o3A1E
once rebooted, it just worked for me.
if you want to see the links in action, open plx genmon, select the plx chip you want (if you have multiple) click perf monitor, then click start at the bottom.

in the middle it tells you the link speed of each port (here i have one device that isnt exchanging any data on gen 3x4 and a device which is a little active on a gen 2x8 link, and my computer is link 0 at 3.0x16) a normal gpu will say G3x16