[Solved] Does Apple Arcade benefit from using an eGPU?

Hello Folks,
today I tried Apple Arcade on my mini and I was wondering if it would benefit/support egpu?
Played mini Motorways - great game - but when gameplay is progressing and town is getting bigger, fans are speeding up and it starts to stutter, even its "only" 2D graphics.
So would it be a good idea to invest in eGPU setup?
Sapphire Nitro+ Radeon RX 5700 XT 8G & Razer Core X

Thanks in advance!
Markus from Austria 🙂

@markus2801a those games that actually really drop due to GPU load will most certainly see a difference. This is only an assumption I can't test myself for multiple reasons, but I don't see a reason for why an Apple Arcade game would not gain any additional performance from an eGPU. However, if it's a CPU issue, you will be out of luck. I also think it to be quite overkill to get an eGPU just for games that are mostly supposed to run well on a tablet that's cheaper than most eGPU solutions come it, even without a host PC. It might just be an optimization issue or anything else entirely in the case of this game (Mini Metro for example didn't use to have any problems on the 2015 MacBook Air I had before my current MacBook), just wait a few weeks and they might update and fix some issues in the future.

Thanks for your fast and detailed answer! Regarding the CPU and optimization of games i totally agree with you!
As far as i have seen (not tested yet, will try Oceanhorn 2) apple arcade does offer many 3D games. I think those games will benefit utilizing an eGPU.

With the power of an eGPU, I would be able to play the games which are on my steam account, which I'am not able to play now because of lacking GPU Power. I was thinking for quite a while about buying an eGPU. Since I have read that MacOS Catalina 10.15.1 Beta 2 Supports AMD RX 5700 XT GPUs, maybe the time has come to get one?!

@markus2801a out of experience I'd say it highly depends. For me, the switch to the eGPU was nice at first, but eventually turned out to be somewhat bothersome, especially with Apple refusing the NVidia drivers to be updated (or whatever the case may be on that topic). The biggest issue I used to have - and still have when I use the eGPU - is CPU power. Since my 2017 MacBook only has a dual core CPU i often see serious CPU bottlenecks. With Meltdown and Spectre those became even worse up to the point, that even Overwatch can struggle at times (and it's not extremely CPU intense, compared to other games). So, depending on which MacBook you have, I can not entirely recommend going for an eGPU setup. I basically switched back to a desktop PC after about 6 months (also due to remaining noise from by my enclosure and the fan rattling my MacBook developed after a month of regular gaming – that's probably just an issue with my MacBook only and just tough luck, so don't count that one). If you have a more recent MacBook, with a quad core CPU, it MIGHT work better – I can't tell.

I don't want to talk you out of it, it's awesome to have a portable computer that can also handle gaming well, but just keep in mind that more recent games need much higher CPU power than they used to a few years ago (probably due to the recent massive increase in CPU cores in consumer hardware these days)

I'm sorry that I did not mention it a bit clearer in the first post, but I'm talking about using the eGPU in combination with my Mac mini 2018 with Intel 6core i7 with 32gb ram 🙂

The Mac mini at this time is the most affordable bargain in terms of processing power and price tag you can get, if you don't want to buy an iMac with integrated display.

@markus2801a I figured you meant this Mac Mini but still didn't know it's specs. It's likely you won't have an issue with CPU bottlenecks for a while then. However, keep in mind that on some games and software, the macOS version may perform significantly worse than it's Windows counterpart. While macOS has gone quite a distance over the past years, I still recommend using Boot Camp for gaming. You better go and check out the builds page to find something that might give you better information on the topic, since this seems to vary a lot from machine to machine and also from setup to setup. If you plan to get a Navi card for use in macOS, I recommend you to wait just a little longer until the official release of 10.15.1 and a few more experience reviews of those cards together with macOS come in, before you end up wasting money for something that's a total stub in the end.

you are right, I should and will wait for another few "weeks".

btw I tested Oceanhorn 2 and with the integrated GPU graphics quality is really bad! It seems Apple Arcade adjusts the graphics details to ensure fluent gemaplay. In my case - even with the most powerfull mac mini version available - it seems to be done by reducing resolution and graphics details.
Sonic Racing looks quite good and plays well!
More games need to be tested - stay tuned 🙂 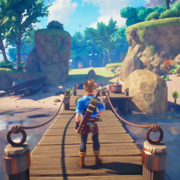 I've tried oceanhorn 2 on my MBPro 13/Radeon VII setup and it looks just as bad as it does with the iris plus.  They don't seem to be scaling it at all and just setting it to some lowest common denominator mode, or it isn't aware it is running on an egpu (I ran Activity Monitor and it is definitely running on the Radeon VII).

Interesting, so Apple Arcade need further improvement for eGPU utilization?! So its better - as @the_livy said - to wait a little bit to see how eGPU support ist getting better in Catalina.

It is not possible to adjust this since there are no settings available for adjusting graphics quality neither in Oceanhorn nor in sonic racing?! But why?

Off Topic: decided to spend my money on getting new iPhone's 11 Pro Max for me and my wife 🙂 as our 6sPlus is over 3 years old #x-mas is coming 🙂

It deepnds on the title. Apple Arcade games are developed by a different studios. Some have settings to finetune graphics (resolution, antialiasing, details, etc...) while others don't. Oceanhorn 2 is a negative example in this regard. My experience is that most games with complex graphics do take advantage of an eGPU.