Terrible performance? (Was: eGPU not detected by Windows / can't get around Error 43 / eGPU crashes)

I've done some more thorough testing and found out something interesting:

With the dGPU, I can get very consistent 30 FPS at the lowest graphics settings, but at the highest settings, even standing still against a wall (i.e. no movement on-screen other than the character's idling animation) gives no more than 12 FPS, and moving around is unbearable.

With the eGPU, even at the lowest settings I CAN'T get a consistent 30 FPS (stutters / drops to ~25 when moving) but at the highest settings I can get 30 FPS while standing still against a wall, and moving around isn't that terrible either.

I don't know if you fix your problem already, but it seens to me that the bad performance can be a bandwidth limitation. You have to make sure that you are using pci gen 2, in order to get the best performance possible on express card. If you can't change that, you can try to disable audio from HDMI or reduce color format to limited RGB, this will improve performance by giving more free bandwidth for your eGPU. And if you still having issues you can use msi afterburner and send some screenshots of the game running.

Having looked at your OP once more, I'm wondering if you're now providing power to both the six- and the eight-pin power inputs present on your GTX 770. I notice that you new PSU (the Corsair CX430) only has one 8-pin (6+2 PCIe) power lead; so to where/what are you connecting to draw the rest of the required power for your GPU? (NB  it's important that both of the power inputs on [the top of] your GPU are filled).

My thinking is as follows: an eight-pin PCIe power connection supplies up to 150W, and if you're then using a molex+molex to six-pin PCIe adaptor (which can supply a maximum of 65W), then you're potentially supplying short of the maximum power (230W) required by your GPU; this, i.e. your PSU's shortage of PCIe connectors, could be what's causing your problems.

@jhonathanldp thanks for the recommendations, will try them out if the following doesn't work...

@nick_vasey I'm using a 6-pin to 6+8-pin molex connector to draw power from the EXP GDC adapter, just like in this image: 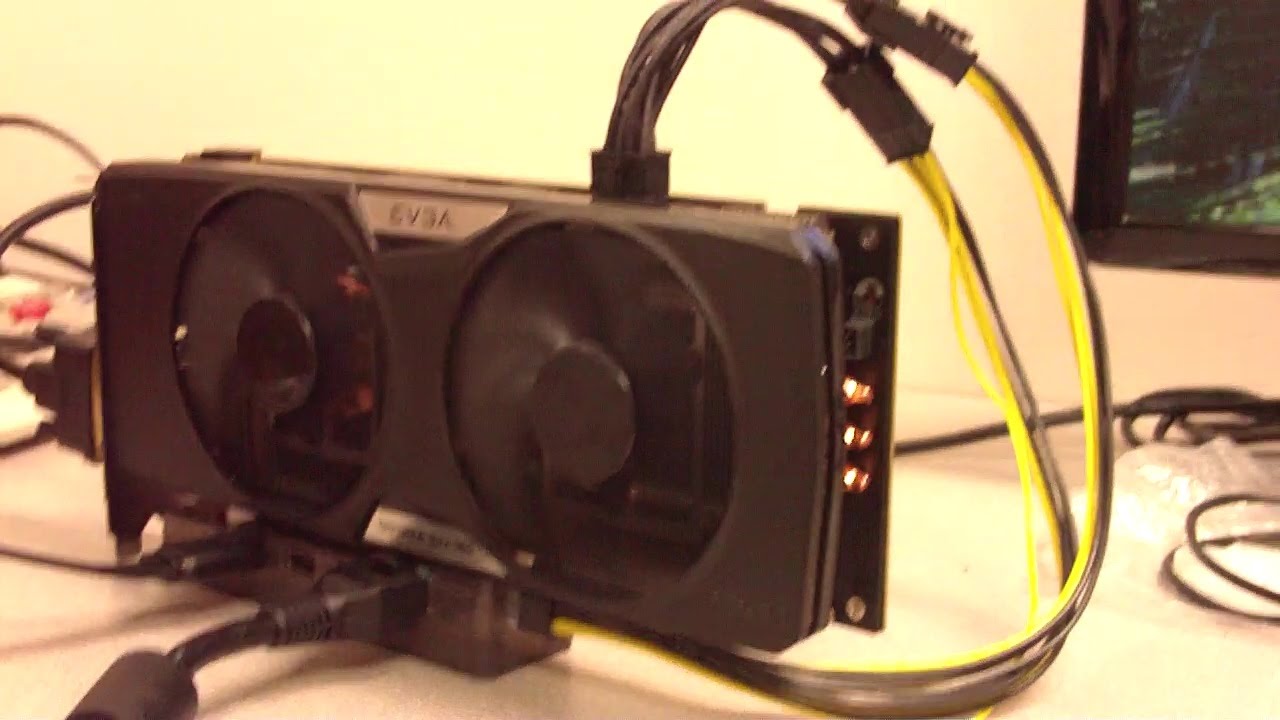 The GPU in the image is a GTX 960 though, which requires about half the power of my 770 according to the official specs. Maybe the 6-pin output of the EXP GDC doesn't offer enough power.

Update: Still seem to have the bandwidth (probably) issues. The in-place rendering might have gotten better, but I'm not sure. I'll keep this cable setup anyway since it makes more sense. (Drawing 14 pins of power from 6 pins might prove troublesome I suppose.) Will try the tricks with disabling audio and such now...

Update 2: Disabling the Windows audio device corresponding to the DisplayPort output of the eGPU didn't make a difference. Not sure how to limit RGB settings.

You can change here. But i dont think that will improve a lot. 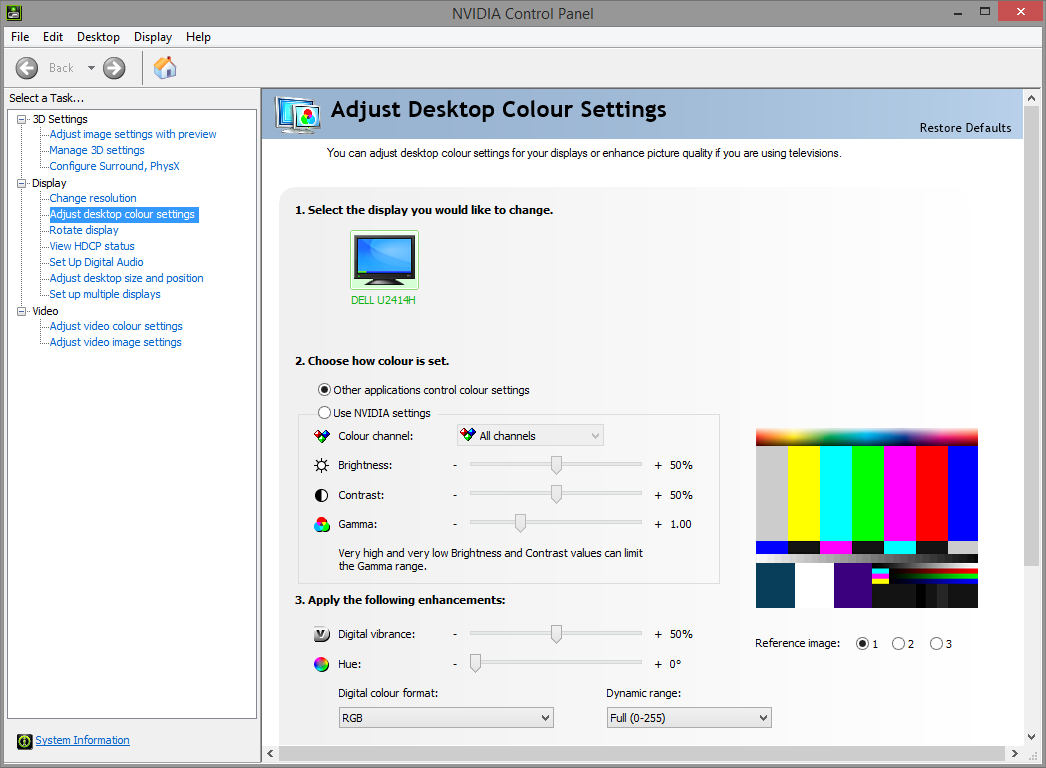 Have you check this part of Nvidia Control Panel?
And try to disable all related audio devices on sound panel on windows, i've got a 12 fps improvement disabling audio from my card. 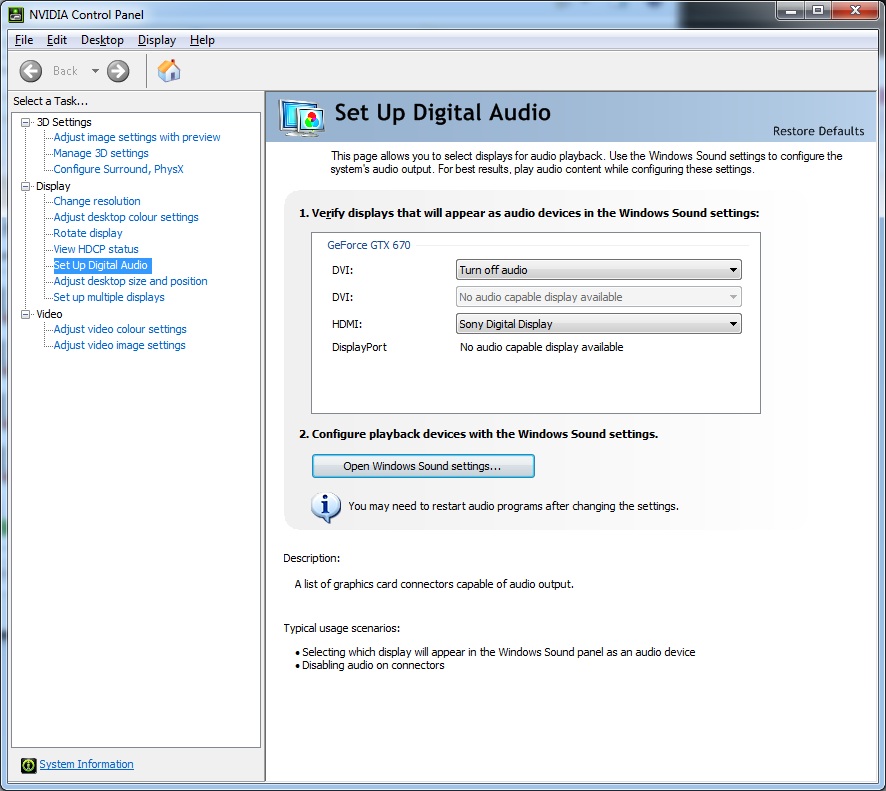 And check if you are using gen 2 speed on you express card. You can check that using GPU-Z when your game is running. Another thing, what is the processor of your laptop? Did you test different games? (Some games that demand more bandwidth have less improvement using eGPU).

Games that i saw a big improvement was:
War Thunder,
GTA 5,
BF1 (If you have a good processor)

Note: i found those screenshots on the internet, i don't know how is the nvidia control panel, because i always had an AMD card.

Using nando4, I was able, with great cost, to recognize an rx 570 card a few times, and show me error 12, but before I deal with that, I want to make my boot reliable.
I stay hours trying boot with wifi on and hotplugging egpu until it be detected in the software.

That is a whitelist issue?

After hotswap with EGPU detected
https://drive.google.com/file/d/1tvtg6PcHQF-6siA32fWQODGS-W6ubRzw/view?usp=sharing

Hello guys.
Lenovo is full of tricks, does anyone know if this problem is a symptom of the white list?

I have lenovo g400s like you, can you give me step by step how to connect it?