I want to share my experiences about the two different ADT-Link Extenders. Maybe I am the only one with the following problems, but maybe some of you also made the same experiences.

At first, what are the differences between both 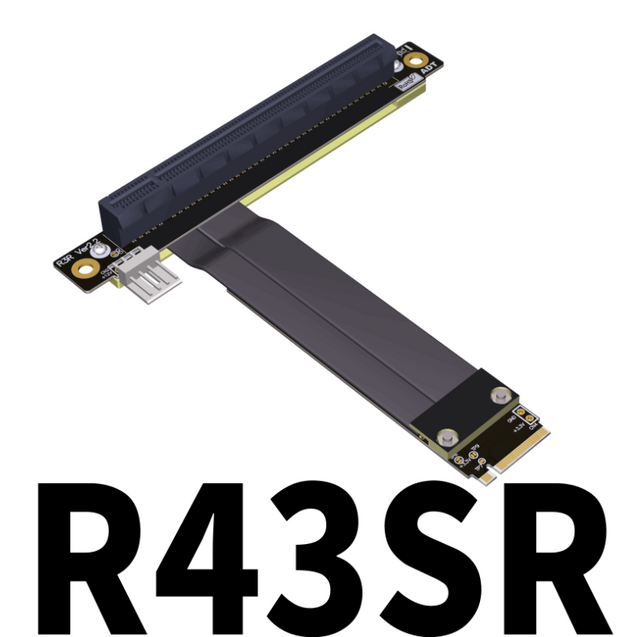 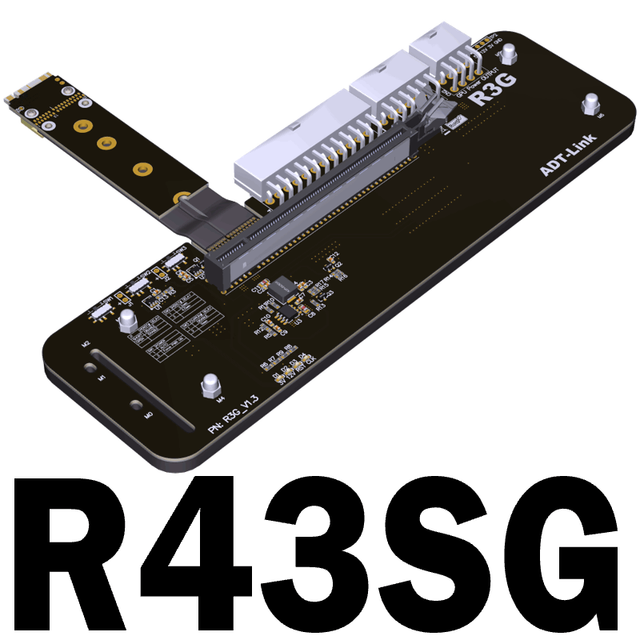 I bought both as PCie → M.2 Extender and use the JEYI from M.2 → TB3 for my MacBook. After some investigations, I can't see any technical disadvantages in this double conversion and just fought about doing it that way for more flexibility. When I somehow want to use it with an M.2 device, I can do it and have a pretty good performance.

The ADT-Link R43S which is depending on the rotation a R43SF, R43SL, R43SR and I guess even R43MF, R43ML, R43MR are identical.
There is a power connector which is needed, and it powers the PCie lane with a SATA power adapter and the power of the M.2 connector. A PCie lane needs to be powered with a maximum of 75 Watts (if I remember correctly). This is especially needed for passive PCie devices, like network cards, SDI cards and so on, which don't have external power connectors like a GPU.

The problem with that in combination with an eGPU is: if you use a normal ATX/SFX power supply, you need to jump start the power supply "by hand" to start your system. This works fine but is a bit annoying.

In comparison to this the R43SG or in another rotation the R43SG-TU can be powered either by an ATX/SFX power supply or by the very popular DELL DA-2 8PIN 12V/18A/220W PSU.
I for myself use it with a beQuiet 650W power supply for my Vega64. You just connect the power supply with the Extender and then from the Extender you can go to the GPU with max. 2x8-PIN.

Furthermore, the R43SG is much bigger and holds the GPU you can even fix it with 2 screws for a better hold, while the R43SF is a tiny one which for bigger GPUs needs to be held somehow.

When I first started in the world of eGPUs I just bought a cheap R43SF extender, then after a lot of "getting into the topic" and "everything is stupid", I got my setup working. I was very happy to have a big performance increase. But I also had a problem which I do not understand till now:
It depends on what I'm doing, if I'm playing, which game I am playing, which engine the game is using or how I demand the GPU, my GPU crashed from time to time.

I built my eGPU with a power supply and a power supply for my MacBook and some other stuff in a small Mini ITX case (want to write about my build when I have the feeling I am finished).
I thought the problem could be that everything is so much compressed in that small case, then I tried to make more room and place the parts as wide from each other as possible. And boom it was so much better, then I tried something like aluminum foil or copper to bridge the power supply from the eGPU to decrease the distance, but that didn't help. When the two things are next to it other, it just crashed very often.

So in the end I was very frustrated and tried a lot of stuff but nothing worked very good.

the problems are gone. Everything is very close in the case again without any problems. It doesn't matter what I'm doing, the eGPU is just working. Since then, I haven't discovered any problems nor crashes. Plus, it is much more comfortable to have the power supply controlled by itself with plugging/unplugging the eGPU.

I also feel like the GPU now has more power than it did before. However, I haven't measured that yet. Should I ever have a day off and feel like taking my setup apart again, I'll definitely make up for it.

What a very long text

Sorry for that, maybe it helps if someone is new and wants to know the differences between the 2 versions of ADT-Link extenders.

I would be interested to know whether any of you have had the same experience, or whether I caught a damaged adapter the first time?

This is starting to infuriate me. I've searched through Google and egpu.io regarding how you turn on an atx psu connected to a R43SG. My understanding so far is that you need to connect the 24-pin psu cable to the r43sg. The only way I have seen people on Google explain how to turn on atx psu's is to connect two of the 24-pin cables with a piece of wire/paperclip. But if the 24 pin is plugged into the r43sg then how do you turn the psu on? 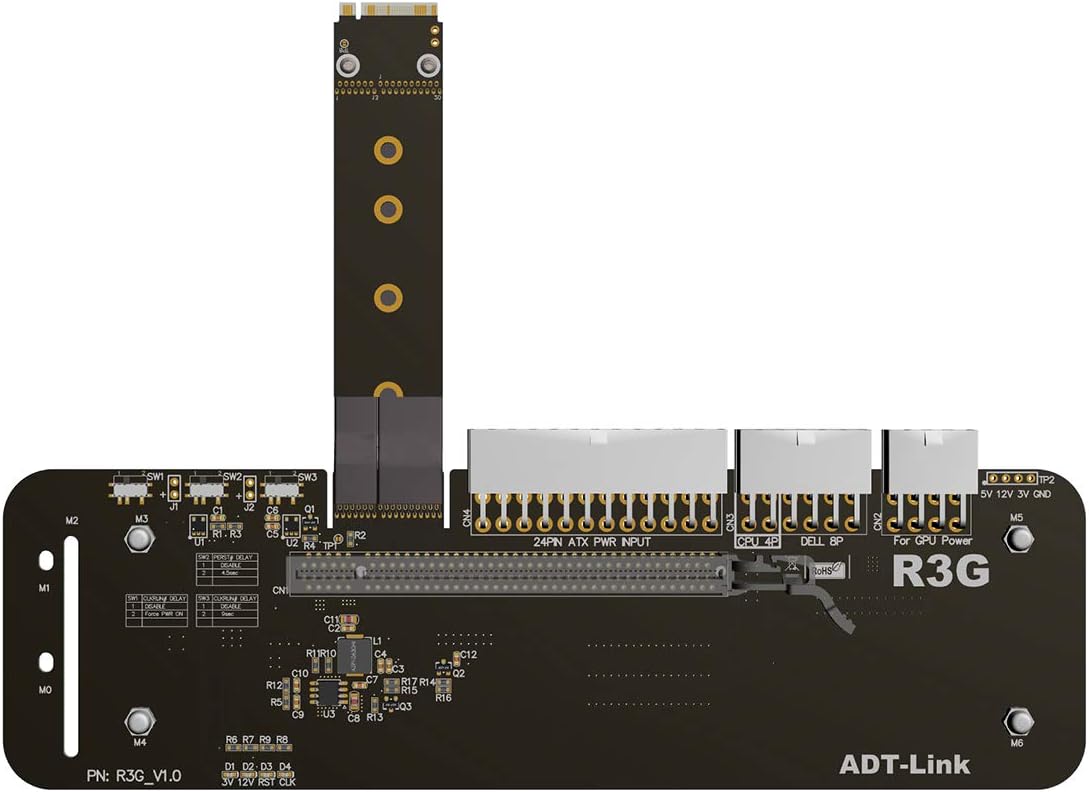 @nando4, thanks for your reply. I'm trying to build a bottom of the barrel cheap build and am looking at some cheap second hand psu's. Some of the psu's don't have an off/on switch on them. What would be the best way to control the off/on of my psu then? (What are the other states of SW1? Is it possible to attach a power switch to the r43sg?)

Also, it's my understanding that if you have a 24-pin and 4-pin plugged into the r43sg then you can plug a male 6/8-pin to male 6/8-pin from the r43sg's 8-pin port to the gpu. Is this possible? I'm asking as some of the cheaper second hand psu's don't have 6/8-pin cables (I'm aware that the psu would need to provide enough power/watts via the 24-pin/4-pin to power the chosen gpu). If this is possible, does the r43sg come with the male 8-pin to male 6+2-pin or do I need to buy that seperately?

@henny, see and implement my previous reply to you query.

Hello again. I am considering buying the ADT-Link R43SL instead of the R43SG because I am building a super budget setup.

On the ADT-Link website it says that the R43SL comes with a sata to 4-pin floppy adapter. However, according to this post ( https://www.evga.com/support/faq/FAQdetails.aspx?faqid=59716) the maximum wattage that can be supplied from a Sata connector is 54W. I read somewhere that the R43SL can also take power from the m.2 slot (in this case from my Acer aspire 5 laptop). It wasn't clear if this was able to get the total available power to 75W required by some gpus (that don't have external power inputs). Anyhow, my laptop already has a 'on the smaller side' ac adapter (65w) and I'd like to retain as much of that power as possible for the laptop components (mainly the cpu, as I'm doing a custom cooling setup). Is there anyway to get more than 54 watts to the R43SL via the 4-pin floppy header via an adapter that connects to an output of an atx psu?