Mesmerized by @megaseppl, both on the mac mini and his home automation. Respect!

I've done something similar with EurekaMaru, my mac mini. Resting on top of a Razer Core X (still waiting for it's graphics card what with the AMD releases and all), I designed and 3D printed a support for the machine, and a Core X matching 120mm fan support. 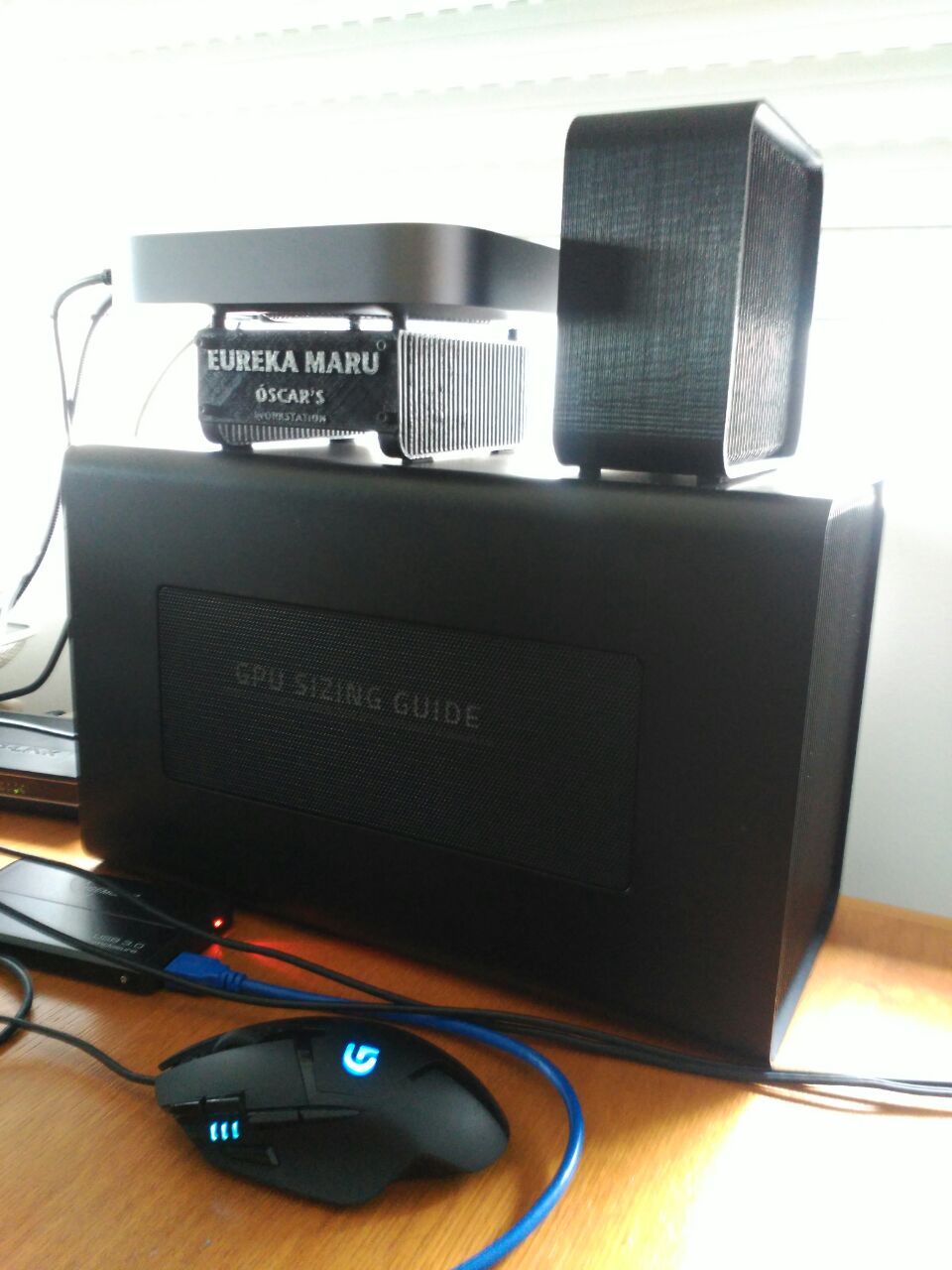 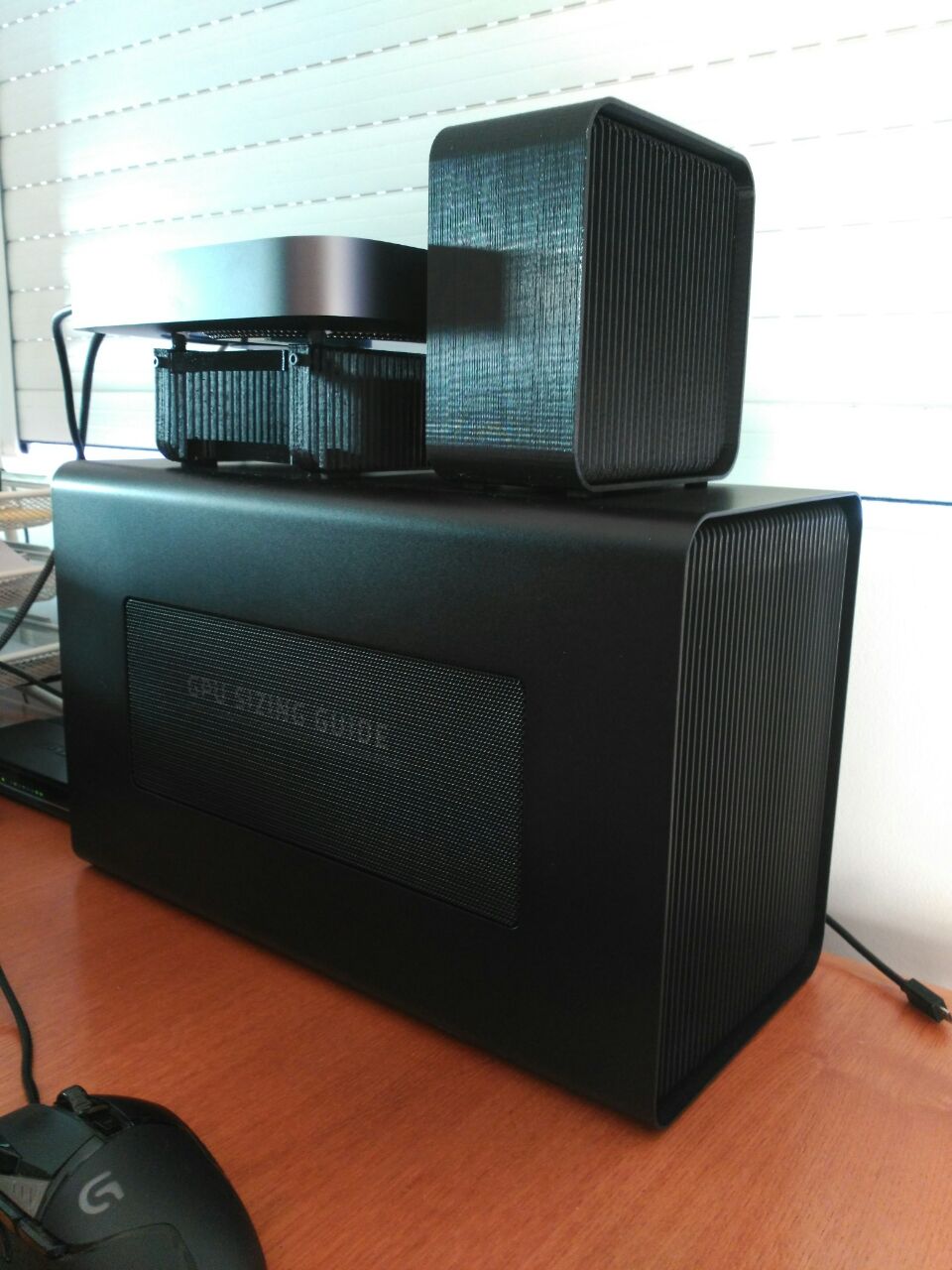 For those of you have a 3D printer, print this: M3 Mac Mini Mount by EidolonNight (print this if the whole model doesn't fit on the build plate of your printer)
and put a 140mm fan blowing upwards (with the bottom cap removed), it works great on mine and I am seeing roughly 6-10 C drop while playing GW2.

Macsfancontrol app works well for me. Thanks to @squuiid for the tip. Don't know who at Apple mandated a lazy cooling profile for the new Mini. Maybe that person esteems the silence of the 2013 cylinder Mac Pro as ideal. Ah, about that... actually, a melty-to-the-touch Mac Mini is somewhat alarming. Clearly more so than whisper fan noise. Mac Mini workstation, Braun kitchen appliance - two distinct apparatus here in 2019. Not much clamoring to converge the two. Just my input.

Anyway, using the app, I re-profiled the Mini's internal fan to calmly ramp up gradually between 50 and 68 degrees Celsius. Instead of, you know, drunk-lurching into action around 99 degrees - the way Apple's fan profile does. (Not to point fingers or anything). Then to test the app's effectiveness - I ran a dozen YouTube K-Pop videos in 4K. IN CHROME. (Noooooo! Melty, melty. Aluminum enclosure-infused grilled cheese sandwich, anyone?)

So...what's the result? Ta-Da! Happy days! Now my beloved non-Braun, wholly-Apple, mini desktop product remains...slightly above room temperature. No matter how much K-Pop karaoke I throw at it. Okay, my Korean may not be the greatest, but the fan in the Mac Mini is now really effective.

And yes, modifying the fan profile did increase performance in my typical work-flow. For example, I tested a four and a half minute CPU-only render in Maya 2019 for Mac, loading all 6 cores to 50-60%. According to Intel Power Gadget for Mac, my i5 processor now maintains a 3.9 GHz clock speed, even slightly above, throughout the render. I'm pretty sure that's as fast as any 8th generation i5 chip will go when utilizing all 6 cores. This is exciting. I had never seen my Mac Mini maintain that speed before. Now it does.

With similar fan profiling, I wonder how fast the i7 Mini, and the i9 iMac can go?

What a wonderful topic!
i feel less alone now.
I bought a 2018 Mini one month ago.
I7, 512 Ssd,10 gig ethernet, 64 gig OWC ram ( installed by myself with iFixit tools )
3 screen with Akitio display port splitter, the third one plugged Hvmi.
Run very well.
Love the Mini since my late 2012 i7, 6 years old now, and running always fine despite the 16 gig ram limitation.
And yes, even in sleep mode, the beast is very hot.
I have a fan in front of it with external varispeed, but this stuff is so ugly :/
So I’v ordered a 140 mm Noctua fan, the Glory Blow Hole is stunning 😉
Gonna mimick it ...

I did test the MacsFanControl , but even if i set the fan to constant 4400 rpm(max you can set),
reboot to carry the fan speed to bootcamp win 10(checked with my hand on the air exhaust),
the CPU temp are still in 4x C at idle, and 99 C soon when I run the benchmark in XTU app, still throttling a lot in temp.

To Sebastian Krampe :
Thanx again for your post.
About the heat in sleep mode, I had power nap on.
I did’nt check that, it was on by default since my 2018 have Mojave stock.
On my 2012, Hi Sierra, it was off.
Althought there is a big usb 3 hub connected, now the temperature in sleep mode is very cool.

Since I’m building a Glory Blow stuff ( I’post pics when finish ) I wonder if it’s safe to take the plastic bottom away ?
Does it disturb the air flow design ?
I wonder ....

Does the CPU still throttle with new thermal paste applied?

Neat, but damn expensive (and doesn't say whether the fan is replaceable).

The fan is replaceable, but it's 80mm and no dust filter and slippery plastic feet and the whole product looks kinda DIY raw - all in all I wouldn't pay 150$ for this, but the concept is pretty neat.

Less elegant, but at least the price is right and it's 120mm, with double sided glue tape it even holds the mini without the base on, probably:D

The real thing would be an SMC controlled fan base, but I guess it's not possible for third parties, let alone for DIY-ers.

I have a  Mac Mini  2018. I use it primarily for coding and especially for gaming in Windows. Usually when I'm gaming, the mini gets very hot when I touch it. I don't know the temps because I also don't know how to check it. Lol! I recently searched on Amazon a USB powered cooling fan:  https://www.amazon.com/AC-Infinity-MULTIFAN-Receiver-Playstation/dp/B00MWH4FL4/. I think this might help cool down the  Mac Mini . Has anyone tried this? I need to read your comments and suggestions before buying it. Thanks!

My cooling solution for MacMini 2018:

Three radiators (TOOGOO 150 x 60 x 25 mm from amazon.fr) held with elastic bands to a Mac mini, itself installed vertically. No paste used, the contact surface being huge I do not think it is needed.

I am not allowed to add pictures it seems.

EDIT: I am allowed, the option is just hidden: