For a little while now, I have been using a Lenovo Yoga S730 Ultrabook alongside a Razer Core X EGPU for my PC setup. For those unfamiliar with the S730, it is an affordable, very well built ultrabook that is equipped with two Thunderbolt 3 ports running at X4 and one USB-C port for data+charging.

I purchased the S730 in January of this year, as a refurbished unit. Being refurbished, I got a pretty neat discount. On top of eBay's 20% tech discount, I paid just over $1000 AUD (~$700 USD). The unit was in its shrink-wrapped original boxing, as what appeared to me as a completely new device, so I am not sure what happened to it to be refurbished, but whatever it was there is absolutely no evidence of it, which was nice. My model's factory specifications were as follows:

The very first thing I did before even using the device, was to pull it apart. I removed the factory thermal paste and replaced it with Thermal Grizzly Kryonaut (Something I do with all my devices). I swapped the factory SSD with a 1TB Samsung 970 Evo Plus and the entry level WiFi card with an Intel 9260 chip.

Installing Windows 10 on the blank SSD made for a very clean installation, and I did not need to install any proprietary software from Lenovo to maintain full functionality of the device, including the keyboard shortcuts.

The positives:
Overall I am extremely happy with the laptop, although it is not perfect. The screen is very bright and clear, but does suffer from some minor reflection in direct sunlight if not at full brightness. The keyboard is well spaced and the large keys make typing easy, and is fully back-lit. Probably my favourite aspect of the device would be the build quality. Immaculate, with no faults or quality control errors, it feels robust and uses no plastic, including the screen, which is scratch resistant glass. The Thunderbolt 3 and USB-C ports are reinforced with small steel brackets, which in my opinion is extremely important for the type of device it is. The fingerprint reader is also very fast. In fact I had a little competition with my brother, who owns a Microsoft Surface Book that has extremely similar specifications, as to whose device had a better startup and login time. The S730 managed to best it, which came as a pleasant surprise.

The negatives:
Now, for the negative. The battery life, while is more than adequate for my own use, is not at the same level as the competition, such as the XPS 13 or alike. Thermally, when on battery, the laptop is near silent and runs very cool. When powered while running a program such as Lightroom or a game such as Overwatch will rocket up to approximately 91'C, then fairly quickly drop back to around 70 degrees where it will remain for essentially as long as you play. Obviously it is thermal throttling to achieve this, with the average Core Frequency around 2Ghz over a few hours under gaming load. While this is definitely not perfect, I have used it to edit many large RAW files, edit and render 1080P footage and play games for hours without any notice in performance loss over time.

As an EGPU companion:
Initially I used an AMD RX580 for my EGPU Graphics Card. Installation was more or less painless; install latest ThunderBolt 3 Drivers, plug in Razer Core X, Select always connect via ThunderBolt 3 Software, wait until Windows installs all relevant adapters, restart PC and it is working perfectly.

Or so I thought.

Initially the device automatically installed Adrenalin 17.1.1, which was stable and worked well. I updated the system to Adrenalin 19.2.2, which at the time was current. Under normal conditions, such as on the desktop or browsing on Google Chrome, there were no instability problems. If I open a game (For example, Overwatch or Apex Legends) it will run without issue, but if I tabbed out of the game onto the desktop or another program, the system will freeze for maybe 1/4 of a second, every 5 seconds. This was only a visual freeze, with no impact on audio or typing, which continued.

This problem ONLY appeared when there was a cursor on the screen. For example, if was playing Apex Legends and tabbed out and back into the game, while actually aiming / moving the character there is no freezing, but if I opened my inventory or the settings where there is an in game cursor, the freezing will begin. If I exit the game, the issue will continue until the computer is reset.

I did research, posted on some forums and tried my best to mitigate this issue, but I could not solve it without rolling back drivers, which wasn't something I wanted to have to do. Thus, I parted ways with the RX580 and purchased myself a GTX 1070.

Running the NVIDIA card, it was essentially the exact same installation process, but when I updated to the latest drivers there was no such freezing issue. Well, ALMOST no such issue. I usually leave the laptop plugged into the Razer Core X when it is off, and the Core X will automatically enter sleep mode. When I power the laptop on, the Core will awake with it, which is great. Except, that on initial startup there is always a skipping / momentary freezing issue with visuals in windows, such as loading animations or Youtube videos. This problem is completely removed if I restart the laptop, which is essentially what I have been doing. A much better issue than what the RX580 presented me. The laptop model and CPU are both very new, and maybe this is what is causing the problems I encountered, with fixes coming in the future. I am not sure.

Overall I am extremely happy with the S730, especially considering the price. In my opinion it is the best Windows MacBook Pro alternative, giving a similar Gunmetal Gray, all aluminium build and ultra-portability, without the abhorrent price of other devices. It is not the perfect laptop, or even the best ultrabook, but top-of-the-line build quality, great performance and two full speed ThunderBolt 3 ports for $1000? Its a yes from me.

I just bought this laptop but use Sonnet Breakaway Box 550 instead.
Unfortunately, my laptop has detected TB3 connection but could not detect installed GPU (Zotac GTX 1060 3GB Mini) after I plugged in and selected " Always Connect".

I dont't know if there are any special setup needed for this.
Is it possible if this laptop doesn't compatible with this box ?

I know this post is old but I don't see many people using this laptop and thought maybe you could be of some help to me.

I have the same laptop with these specs:

Everything works good enough, the only issue I think I am facing is not being able to get enough fps.

I believe this setup should be able to get me way more than 40-50 fps on Valorant. While playing Overwatch as well, I usually have to keep my graphics settings low for a stable 90fps average. I have no idea what the issue is even tho I believe my benchmark results aren't that bad. 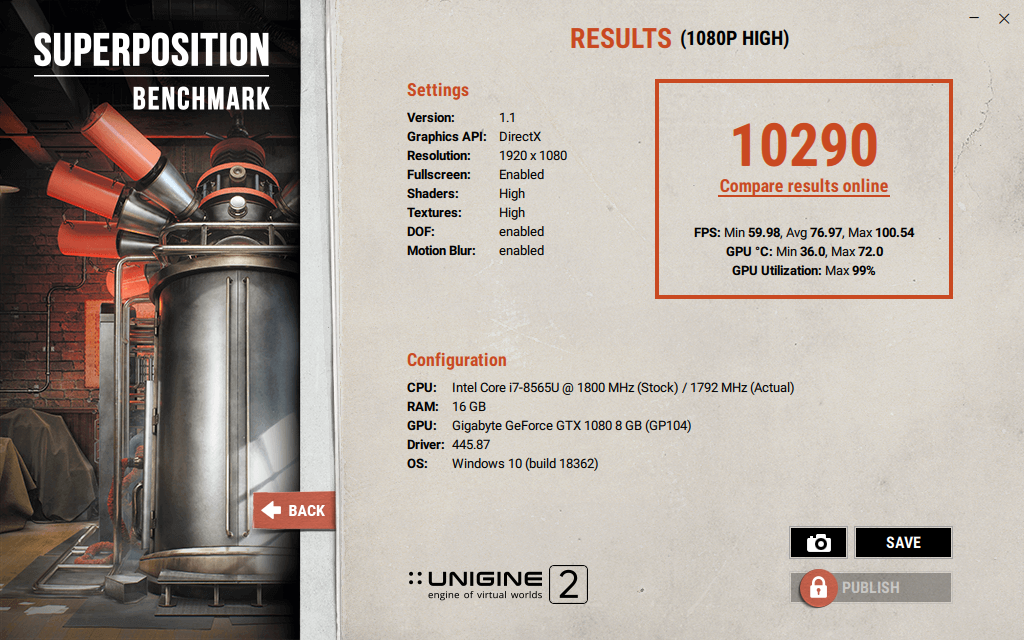 I think I am not able to make full use of my setup while playing the games I do but I have no idea why.

I did post about this issue more in depth here but did not get any replies. If you have any idea as to what the issue could be then let me know.

@himank_kadian, Sorry for the late reply!

I haven't had this setup for a long while now, so I am not sure I can help you all that much. Firstly, make sure everything in your system is up to date, in particularly your NVIDIA drivers.

What I would recommend is running some performance and hardware monitoring software to see if you can identify and isolate any abnormalities. Using HWInfo64 and Intel XTU will cover most of the necessary bases.

What you should look for, regarding bad performance in games, is mostly related to throttling or performance utilisation.

XTU will tell you if your CPU or Motherboard is throttling based on heat or power consumption.

From what you have said, it sounds like a utilisation issue. HWInfo64 should give you readouts of your GPU. Look at your GPU's utilisation. Ideally, the GPU should be at or close to 100% when running a game, unless you have limited it with a frame rate cap such as VSYNC.