Funny story: An email I sent to Jensen H. Huang (CEO of Nvidia) and Tim Cook back in March is the reason we now have Pascal support!!!!

On March 3rd I sent a pretty desperate (and poorly worded, apologies) group email out to Jensen H. Huang (CEO of Nvidia) and Tim Cook (CEO of Apple) essentially begging for Pascal chipset support on Macs. I have read hundreds of pages of threads waiting on Pascal support for Mac all over the web, lot of dead ends, lot of sad people giving up and selling chipsets. In an effort I considered to be completely futile, I decided to start digging around and seeing if I could find contacts and reach out to at least one of these guys, maybe they'd simply delete the email, maybe it'd never get through a filter, or best case scenario they'd at least forward the email to someone who could at least write the idea on a post it note.

What happened was even better. Tonight the CEO of Nvidia emailed me back informing me that my email was the decision Pascal has come to MacOS, that previously he had no idea it was wanted. Thanks to communities like this, the Hackintosh community, the creative editors and VFX artists and the colorists over at LiftGammaGain.com, I was able to present that there was certainly a corner of the world that wanted this. Though I haven't heard back from Tim Cook and likely won't, I can't say how much it means to hear back from Nvidia's CEO so candidly. Reaching out made this happen, and I never thought the day would come.

I really do get the notion that Nvidia's team wants to be out here with us, delivering support for Mac's probably doesn't make nearly the impact on their revenue that the gamers or deep learning crowd out there would, but the fact that they did this for us is incredible. Continue to show Nvidia your love, people!

Excuse the cheesey long first email, I was really just trying to paint a picture of how important Nvidia/Mac usability is thru the only angle I'm familiar with: filmmaking. Was an honor to hear back from him, I can't believe my email is what finally made it happen after a year or more of our communities starting to lose hope. 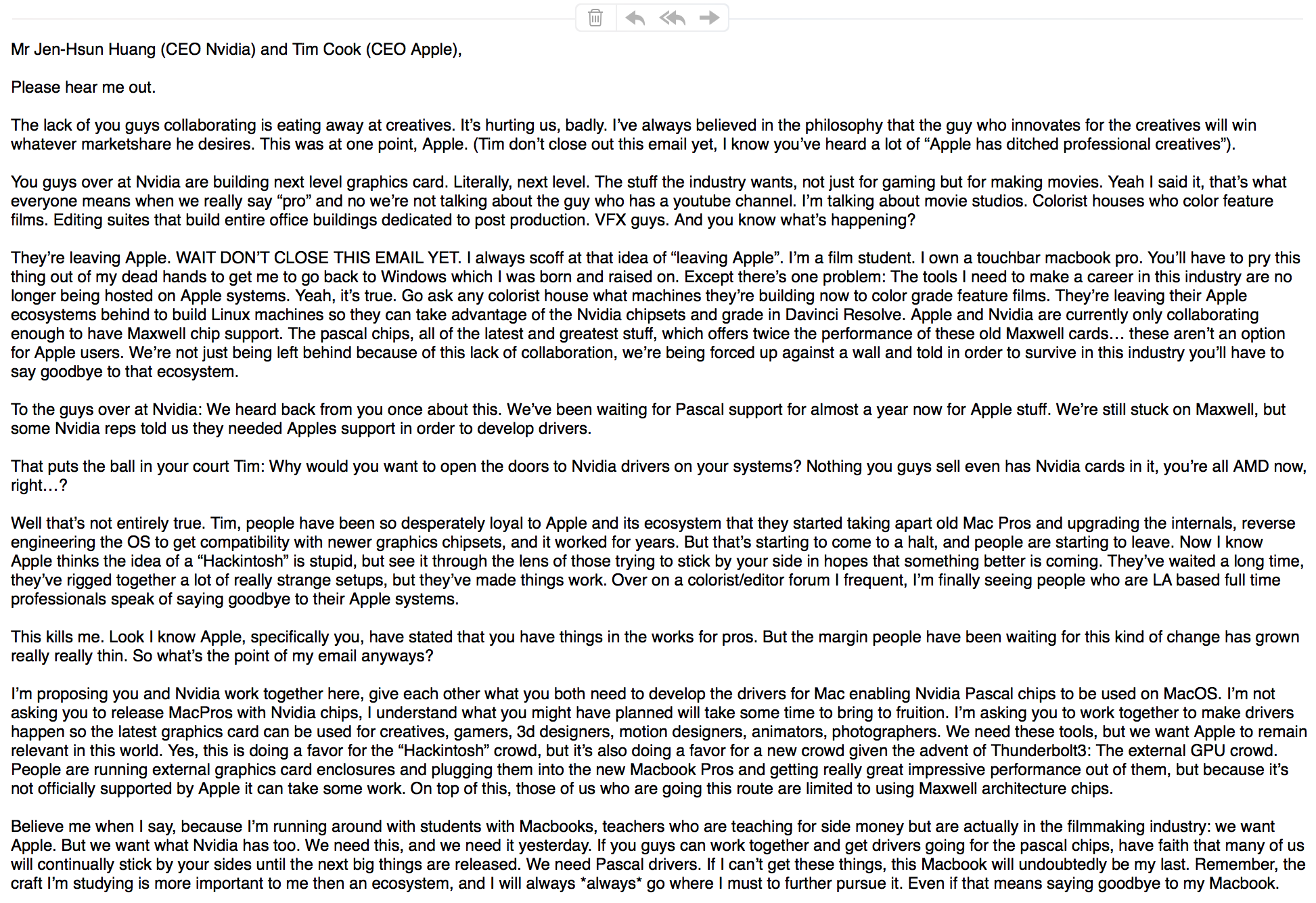 This is really nice to hear!

Great work! A whole new world is opened up to us all with their support.

Nice job man! We all thank you so much haha. Its funny, it was a matter of asking the right person

That's great the Nvidia CEO replied. Not surprising Apple didn't. Cook is not as likely to respond to customer emails as Jobs was (or Schiller is). I've tried a couple times, some things not just relating to products but their "socially conscious" business practices, too. Brick wall.

Did you mentioned eGPU?

The machine learning and scientific computing community feels the exact same way you guys do. We have been waiting for eGPU for years because it's so much simpler than having to deal with remote development and debugging, and brings the cost of entry for GPU-heavy tools such as deep learning way down. Props for sending the email, it's a very good thing that it was read.

@Anchoricex, I have a really nice task for you, if you want 😉

What about to convince Frank Azor (Co-founder of Alienware and VP General Manager of @Alienware, Gaming & XPS @Dell) to make the next Dell XPS 15" with 4 lanes TB3 (and several ports if could be), and connected directly to the CPU and not the PCH, that it is so well explained here:

Maybe we could get a chance to have the perfect replacement, and upgradable, for the Macbook Pro 😉

Do you mind? We trust you dude!!

Way to go. Man! Thanks for writing that email for us.

Hi,
I also would like contact with Jensen  Huang.  Could you give me e-mail address where you sent your message to  him?