Mac not using eGPU after upgrading to Big Sur

I recently got a 2019 16-inch MacBook Pro. I updated the OS to Big Sur and noticed it's not properly utilizing my eGPU. I use Figma in my job. On my old Mac that's running Catalina, "Figma Helper (GPU)" would always show up under "AMD Radeon RX 5700 XT (Port 1)" in Activity Monitor (as long as I open/restart Figma when the eGPU is plugged in). After the update, now "Figma Helper (GPU)" would show up under both the internal graphics card (AMD Radeon Pro 5500M (Built-in)) as well as the external one in Activity Monitor. But only the internal one shows %GPU usage. The same thing happens to other apps that have a GPU helper.

I did everything in the Troubleshooting guide, but it's still not working. The only work-around I found so far is to close the laptop, reopen the applications, then they will start using the eGPU. But as soon as the apps become idle, it will go back to using the internal graphics card.

Does this happen to anyone else? Any idea how I can fix it? Thanks in advance for your help! Below is my setup:

This topic was modified 4 months ago

You can configure applications to use an eGPU with one of the following methods. 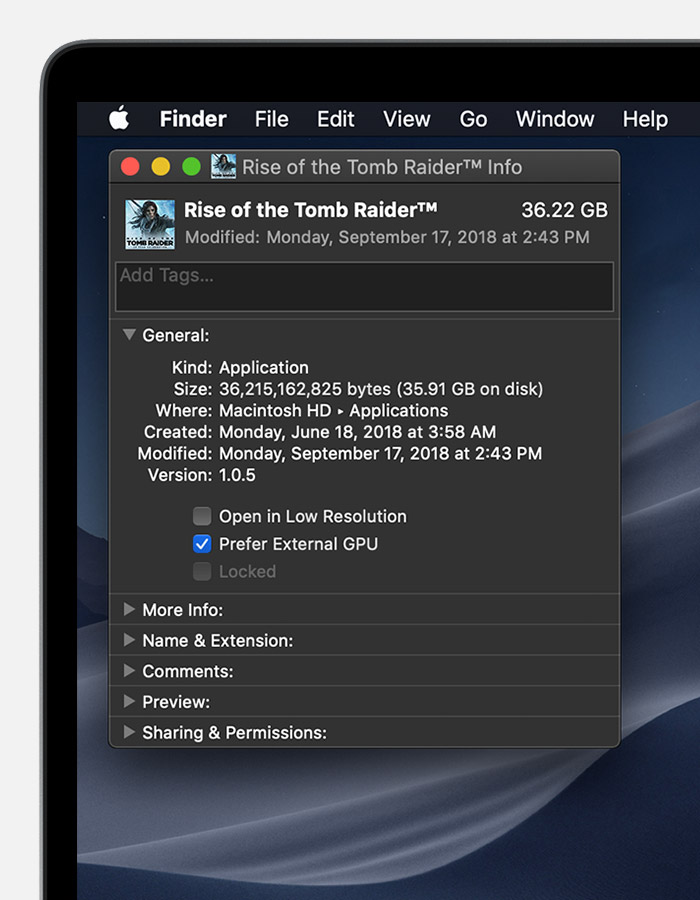 Use the Prefer External GPU option

Starting with macOS Mojave 10.14, you can turn on Prefer External GPU in a specific app's Get Info panel in the Finder. This option lets the eGPU accelerate apps on any display connected to the Mac—including displays built in to iMac, iMac Pro, MacBook Air, and MacBook Pro:

You won't see this option if an eGPU isn't connected, if your Mac isn't running macOS Mojave or later, or if the app self-manages its GPU selection. Some apps, such as Final Cut Pro, directly choose which graphics processors are used and will ignore the Prefer External GPU checkbox.

Set an external eGPU-connected display as the primary display

If you disconnect the eGPU, your Mac defaults back to the internal graphics processors that drives the built-in display. When the eGPU is re-attached, it automatically sets the external display as the primary display.

@mini-i5, Hi there, thanks for the reply. As I mentioned in my original post, I tried all those things in the Troubleshooting guide, which includes the two tips you mentioned, but unfortunately it's still not working : (