@l-c While Apple does not provide native eGPU support for non-Thunderbolt 3 Macs, our community has solutions to enable eGPU feature on most Thunderbolt Macs including the trashcan. The quickest way to get start is @Mac_editor's Purge-Wrangler. Hardware-wise, I'd recommend an RX Vega 56. You can pair it with a wide-range of enclosure. The best matching enclosure to the Mac Pro's quiet operation would be the ASUS XG Station Pro. This is my build with the 2013 Mac Pro + RX Vega 56 eGPU from last year. For reference FCPX BruceX went from 24s with the pair of D500s to 13s with eGPU added to the mix.

Did you see an appreciable change to your processing speed?

I'll check it out.

My computer freezes upon hotplugging my RX 580 to my MBP. The eGPU icon shows up at the top of the screen before everything freezes. Unplugging the eGPU causes my system to crash and reboot.

Some hope to get the drivers relatively quickly: 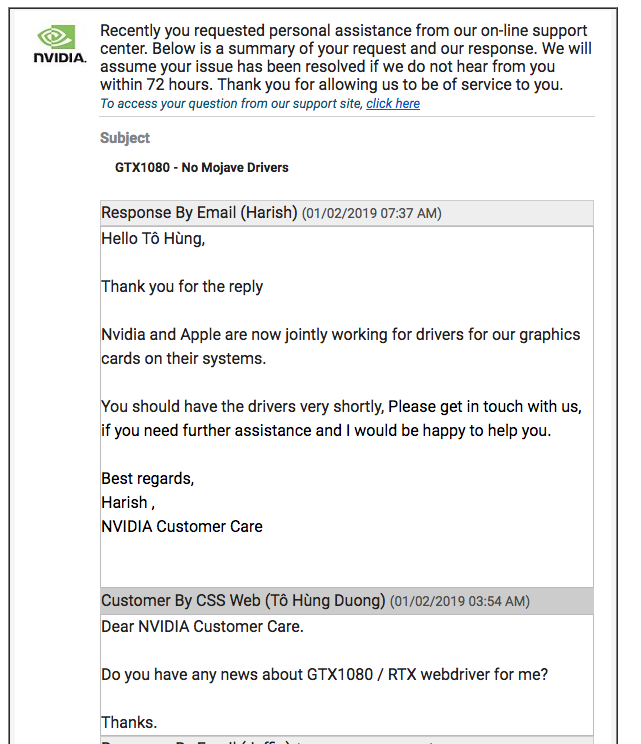 Would it be? It's recognized in Device Manager when running Bootcamp. I've been strapped for time so I'm still working on solving Error 12 on that front.

@aidan_kelly had the same issue myself. Windows isn’t crashing as the GPU is not initialized (due to Error 12). If there was no Error 12 I would expect the system to freeze or crash. Best to test more or simply put it in a PC to check.

Would it be? It's recognized in Device Manager when running Bootcamp. I've been strapped for time so I'm still working on solving Error 12 on that front.

Another potential issue would be badly seated GPU in the PCI slot.
I had this happen with my RTX.

@jangoloti The wording of that response makes it sound they are working on native macOS drivers in upcoming 10.14.3+ for Macs that have Nvidia dGPUs. I'm hopeful there will be Nvidia Web drivers for Mojave. However GTX 900 series compatible drivers took seven months and GTX 1000 series took 11 months. There was no public dispute back then so I highly doubt RTX series compatible drivers will be available in Q1 2019.

@itsage Past releases indicate that most major under-the-hood changes occur at the initial big macOS update and .4 update (since El Capitan). The earliest we may see something could be 10.14.4. Which is months away really. For the last few years I have kept a close eye on macOS build number patterns and the .4 release usually has a high intermediate build number (value after the letter, excluding special releases such as security updates and some betas that have an additional number appended, ex. 5 for iOS; Troubleshooting guide has a brief breakdown of the build numbers), meaning much longer development (almost twice as long assuming linearity). And if NVIDIA pulls it off for 10.14.3 then great for all of us.

Also, I recall one of the forum members emailing NVIDIA for 10 series drivers. They were initially not planning to develop any, but then did after reading it. That may explain the delay there.

Finally, if Apple and NVIDIA are working together, they might as well add full-on eGPU support for NVIDIA. It's really not that difficult. Today we have issues with AMD+NVIDIA frame buffers - this wasn't the case on Sierra. Funny.

of  15
All forum topics
Previous Topic
Next Topic