I play mostly multiplayer games like BF1/Overwatch/Rainbow 6 Siege/PUBG. They certainly aren't close to as demanding as AAA games are, so I was wondering if an eGPU and a 1080/1080Ti would be enough to run these games at 1440p 60 FPS. Wasn't able to find any FPS benchmarks on the forum so I'm posting here. Would love to hear what kind of fps you guys get on your setups.

Isn't BF1 is the very definition of an AAA title?

In any case, it should be mostly doable, assuming you have a high end mobile quad-core for a CPU. You should look for performance reviews. For a rule of thumb, just take the min FPS they report and drop it by say 25%. If the end result is still satisfactory, then you're good to go. Don't forget to take a look at CPU performance for a given game as well.

For example, for Overwatch:

1080p CPU Performance (1080p - But resolution doesn't really change the CPU load, just the GPU load, so if your CPU can do it on 1080p, the 1440p performance will be left to your GPU. Keep in mind you need to approximate a mobile CPU's performance with one of the desktop CPUs on the list, but you should get a decent ballpark figure).

Conclusion: 60 fps is easily doable (you don't even need a GTX1080 for Overwatch, and even a dual-core CPU should be able to pull this off here).

Video card performance (Only one CPU tested, a 6800K at 4.1Ghz, so you can look for additional performance reviews)

Conclusion: 60-ish fps should be doable, but likely with some dips below that, using a GTX1080 and a good CPU. 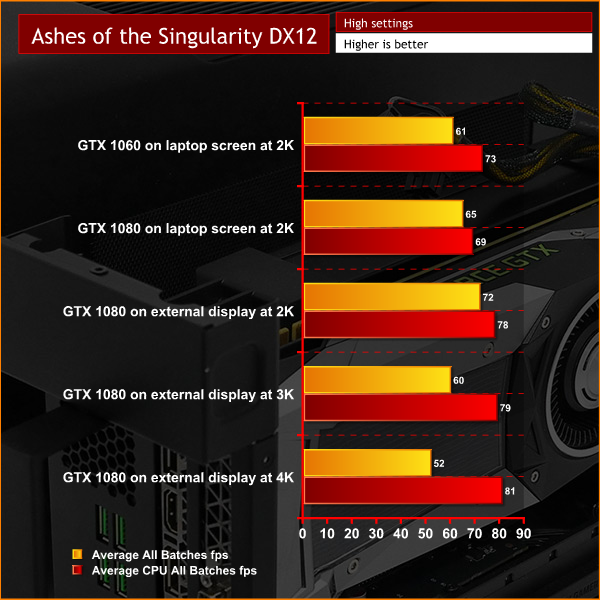 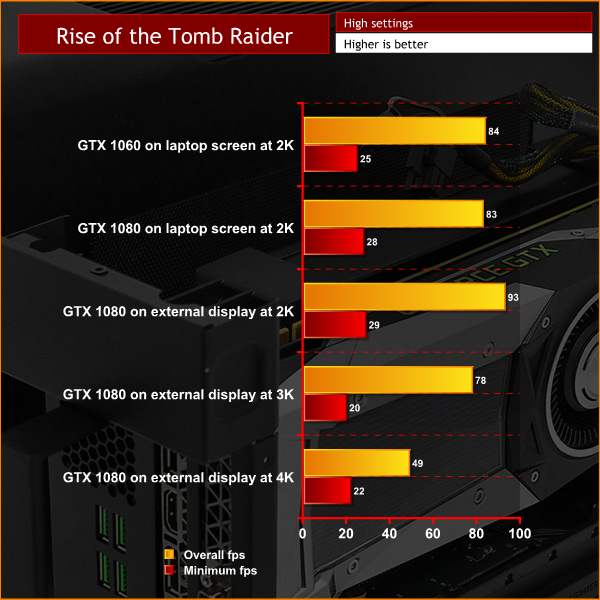 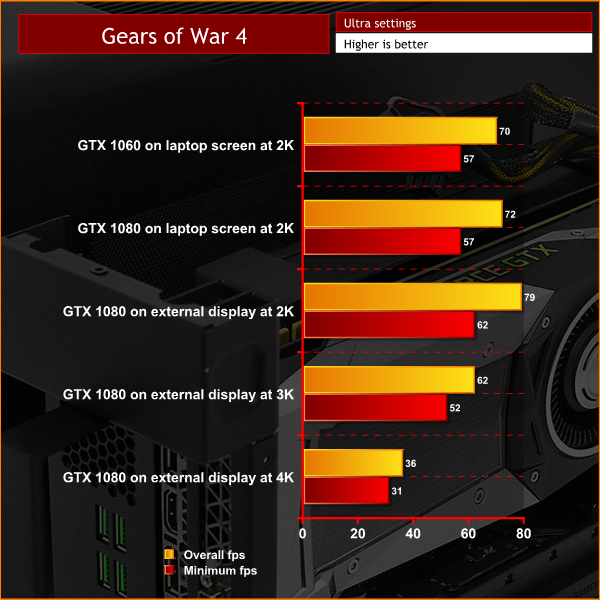 As you will see in our video the simple shift from GTX 1060 to GTX 1080 doesn’t make a massive difference to game play or frame rates. In 3D Mark you can see the graphics score leap forward but this doesn’t deliver much benefit in the real world. We started our testing with the Core and GTX 1080 powering the laptop display however this turned out to be a poor idea as the graphics data shares the Thunderbolt 3 cable with the data that is heading the other way. Disabling the laptop screen and outputting from the Core to an external display gave an increase of a handy 5-10 frames per second over the previous set-up.

We then increased the screen resolution to 2,560×1,440 where we saw frame rates that were similar to those delivered by the basic laptop i.e. GTX 1060 on internal 2K display.

Our final stop was to increase the resolution to 3,840×2,160 and weren’t massively impressed by the results as the laptop hardware wasn’t really up to the job. We had been able to comfortably play games at 1080p and now, after a massive graphics upgrade, we were now able to play the same games at 1440p!

So here's the deal:

Was originally going to build a PC but I really don't want to because my desk is pretty small and I don't live in the US so it's a hassle to find quality and decently priced parts. I do, however, have a 15" TB MBP and that's why I made this thread because the concept of an eGPU is very appealing to me since it doesn't take up much space.

The problem lies in the monitor. I'm getting one of those 27" QHD monitors from Korea as there are literally no good monitors in stock where I lve. So the korean QHD monitors come with 75-100Hz refresh rates FreeSync/G Sync. I'm just worried that I won't be able to meet these refresh rates at 1440p, even with a 1080Ti.

What do you guys think? Gonna be playing BF1/Overwatch/PUBG/RSS.

I've benchmarked loads of games, including PUBG, all at 1440 and aiming to get 60fps, check my builds...