My eGPU setup was working fine when I first got my eGPU hardware, but after not using the setup for more than a year and completing many windows and driver updates that I probably shouldn't have done, my setup now isn't working.

The 2080S shows up in device manager just fine without any errors. I can also open GPU-Z and see it listed in the list of GPUs (intel igpu, nvidia dgpu, nvidia egpu). However, when I open a game, it does not use the eGPU and instead uses the dedicated 1050ti in the laptop.

In Task Manager, I can see the iGPU and dGPU, but not the eGPU.

Here are screenshots of GPU-Z, Device Manager, and Task Manager: 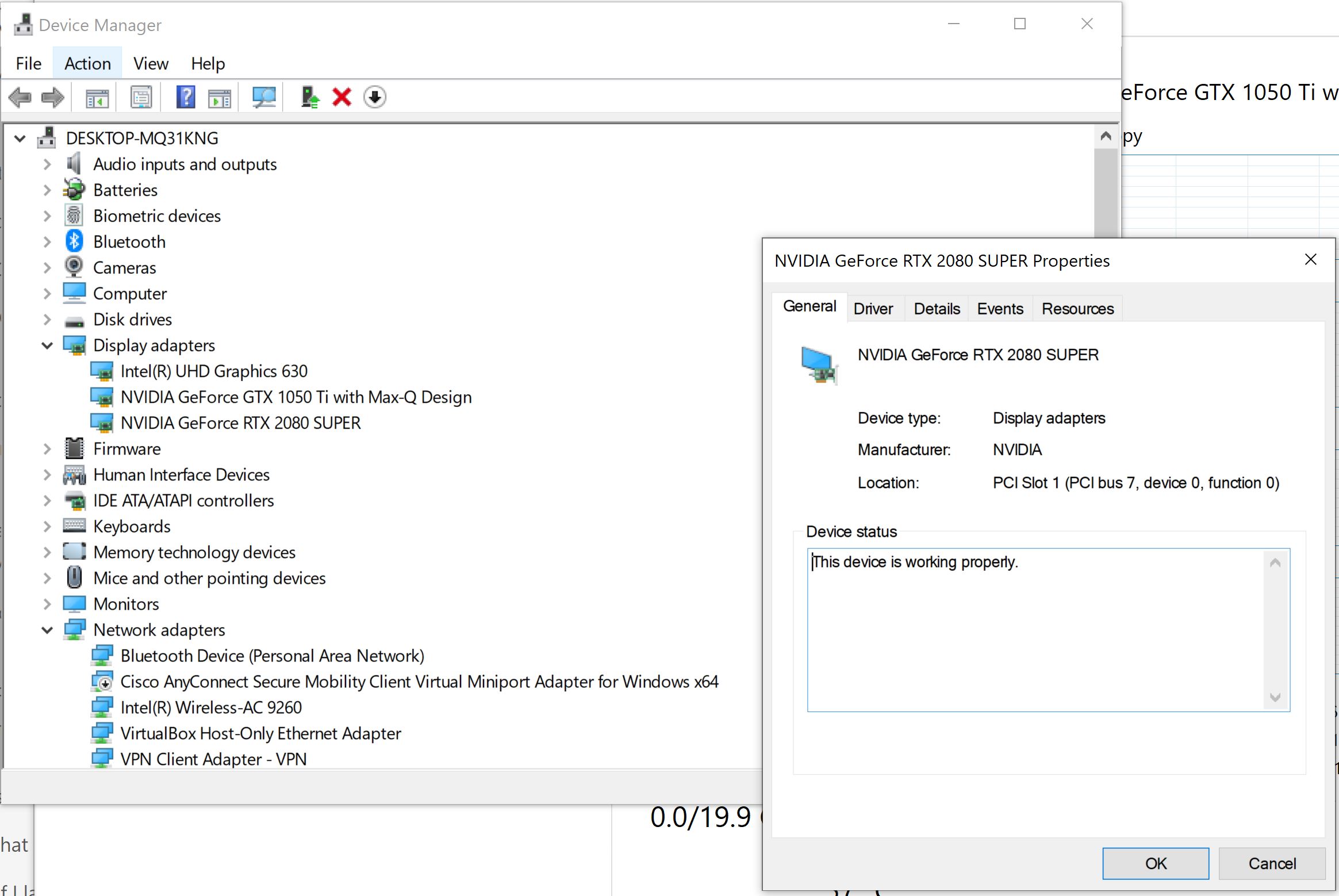 (Strangely enough, GPU-Z is reporting that many basic features like CUDA are missing from the 2080S, when they should be there.)

Back when the setup was working, I would get notifications from the Nvidia Control Panel saying that the 2080 had been connected and disconnected when I plugged the eGPU and unplugged it, but now I don't get anything.

From the Nvidia side of things, I can't see any mention of the 2080S either in the Nvidia Control Panel or in GeForce Experience.

I have gone through the DDU steps of purging all display drivers and reinstalling but that hasn't fixed the problem.

Unfortunately, it seems like most people with a similar setup to mine don't have issues, so I haven't been able to do much besides reinstalling drivers.

Any help would be greatly appreciated!

This topic was modified 2 weeks ago

My setup is broadly similar - Asus ZenBook 14 UX435EG (Tiger Lake, Xe/MX450), GTX970 in a Sonnet breakout box, Windows 10 20H2.  I'm seeing the exact same thing - the GTX970 shows up in Device Manager, GPU-Z reports it but the checkmarks and some of the specs are wrong, NVidia control panel pretends it doesn't exist.

Not sure if you'd noticed - the specs in GPU-Z for the 2080 aren't correct.  They're copied from the 1050ti.  Number of shaders, memory size, clock speeds, all reading the wrong values.

I don't have a solution for you - I came here looking for one as well - but you're not the only one seeing this.

Other issues I'm having: plugging a monitor into the eGPU's ports does nothing.  Windows doesn't recognize the monitor and it gets no signal.

To test, I tried plugging the eGPU into my desktop (Ryzen 7 3800X, RTX2070 Super).  Plugging a monitor into the eGPU worked but it still thought the RTX2070 was the active card, and NVidia control panel didn't recognize the GTX970.

@davsui17 , you want to disable the dGPU to allow the eGPU to be default device for internal LCD acceleration. Do this by:

- directly above the highlighted dGPU will be a PCIe port. Right-click disable it

@nando4, I did that and the dGPU did disappear from Device Manager, Task Manager, and GPU-Z, however that didn't change how the 2080S was detected. It is still in Device Manager, but doesn't appear in Task Manager. GPU-Z, as Brad mentioned, also shows bogus values for the 2080. When the 1050 is disabled, all the stats he was mentioning either go to Unknown or 0. When I try to open the Nvidia Control Panel, I'm told that no Nvidia device is connected and the panel refuses to open.

Just for fun, I re-ran the Nvidia driver installer for the 2080S with the dGPU disabled, but it didn't change the status of the GPU in any programs that I mentioned above. I looked at the Event Viewer for the eGPU and nothing seems to be wrong there, honestly it looks like maybe not enough IS going on.

I went ahead and reenabled the dGPU and now the eGPU gives an error in device manager("This device is not working properly because Windows cannot load the drivers required for this device. (Code 31) The I/O device is configured incorrectly or the configuration parameters to the driver are incorrect.") When I restarted, I reinstalled the Nvidia driver with both GPUs connected and the issue went away. Now the system is back to the same state that it was in in the original post. Any other ideas?

@brad_jones, good to know I'm not the only one ripping my hair out with this issue. I'm THIS close to just dropping $1000 for the rest of the components I would need to get a desktop and monitor so I can make use of the 2080S. It's just frustrating how a year ago the eGPU was basically plug and play with my setup and now it's just unusable.

@davsui17, I'm really curious what the triggering element is.  20H2, a Sonnet box, and NVidia dGPU and eGPU?  That seems like the common factors here.

If it were reasonably inexpensive to do so, I'd consider grabbing a decent AMD GPU to put in the breakout box to test with, but the current GPU market is...not amenable to such things.

@brad_jones, my suspicion is that it's a problem with the sonnet box. We seem to be in the minority here when I look at the successful builds people have been posting on the forum. Most people with similar setups that are functioning seem to be using a different TB3 dock.

@davsui17, figured I'd give that a shot.  I can't get another GPU, but eGPU breakout boxes are a lot easier to come by.  Razer Core X arrived today and is working.  I'm getting some stuttering, so I'm looking into resolving that now.

Stuttering resolved by disabling the dGPU and its PCIe port.

@brad_jones, Damn, I already decided to buy a mini desktop PC to make use of my GPU. Funny enough, it isn't that different in size compared to the sonnet box. Thanks for investigating and finding a solution.

Do you think we can re-sell our sonnet boxes? Or are they completely non-functional for anyone else?

@davsui17, I've got a second GTX970 that I'm going to test it out with.  I suspect it'd work with an AMD card if I had one, or possibly on a machine without a dGPU.  I'll let you know how it goes.