I'm new to this. This forum is incredible, I've been following it for about a year and finally got an external gpu set up today!

Connected a NVIDIA GeForce GTX 1070 to a Sonnet Breakaway 550
TB3–TB2 into the MacPro.
2 Monitors set up using TB2 to Display Ports out of the MacPro

My system report says its there, so I thought I was ok but when I run my adobe apps and check the performance they are still using the AMD D700's.

Also, should I bother with the NVIDIA 1070? I was under the impression Adobe's Suite runs a lot better on NVIDIA so I went that way but since AMD is more "supported" in the Mac world should I switch it out for an AMD? (open to suggestions, I think I got a little in over my head with this )

@spaghettibetty have you tried changing the graphics processor in the Prefereces->Performance panel -> Graphics Processor Settings? (in photoshop) Does your eGPU card appears in those options?

hey @firestarter451f I checked the tab in photoshop you mentioned but it doesn't allow me to change anything it just says detected "graphics process processor:" then lists AMD Radeon HD - FirePro... I checked "Advanced Settings" underneath that but nothing about changing the Graphics Processor.

Adobe does not officially support eGPUs. That means you can just render the programs window with the eGPU when it is connected to an external display and you're using PS on this external display. But this does not accelerate the background activities like rendering the images etc.

For example, here is Photoshop detecting and using my eGPU on my 2016 MBP with my external display connected straight to the eGPU: 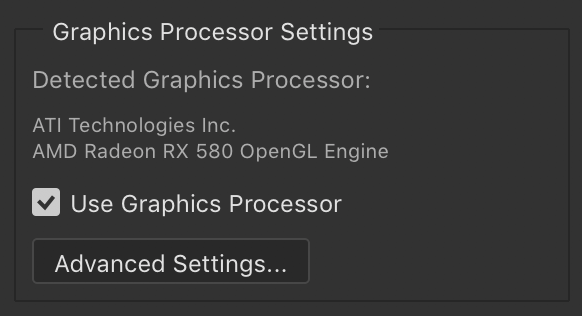 @nanobit @detunedradios Thanks! Bummer about Adobe not supporting eGPU but when I connect the display to the eGPU it detects it fine. Do you think Adobe would support eGPU in the future? I have 2 AMD cards built in to the computer and I think adobe is only using 1 card instead of both. I'm not totally sure about this stuff but it feels like switching to PC instead of MAC is a better way to get slick performance out of indesign, photoshop, illustrator and lightroom ( my files seem to always slow down each application ) which to me seems unreasonable. thanks for the all the help again! Super easy to follow along for the set up.

Not sure what it will do (may vary by application), but worth a shot until we have CC 2019, which I'm sure will add eGPU awareness for its apps. At least I hope so.