Hi, I want to buy a gdc beast and i was searching for a more powerful alternative to the dell da-2. I found this tyco 20A adapter 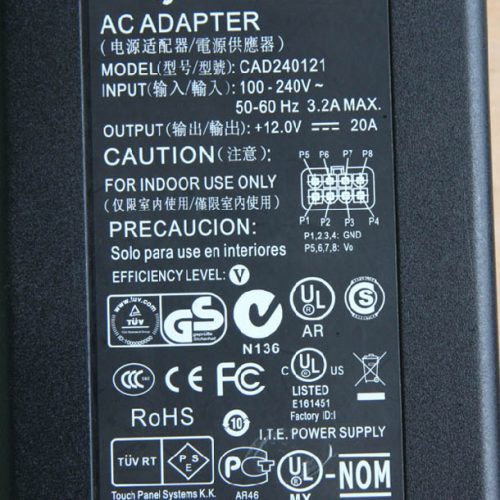 It has an 8 pin connector but but i think the pinout is different from the dell.. am i correct?
I also found the Mean Well Power Supply GST280A12 252W 12V, but it has a 6 pin connector; i'm not an expert but would it be possible to adapt it somehow? Thanks in advance!

Do note that the Dell DA-2 has been specced as 20A by some Taobao vendors. Mistake or does it have high headroom? No matter. Private testing confirms two Dell DA-2 units can reliable power up  6P+8P GPU. The first DA-2 powering the slot + 6P (150W). The second DA-2 powering 8P (150W) by using a 6P to 8P extender and jumperin the DA-2 on as described at:

that sounds very good but, if it's feasible, i would like to explore all the possibilities to stay as compact/small as possible.

You would however have no power management by the EXP GDC since it wouldn't be able to power on/off the Tyco 20A.

is that because the tyco doesn't have the remote and reserved pins? so no power management means that it is always drawing the maximum current? (sorry i'm really a newbie)
i also found the pinout of the maxwell:
https://imgur.com/K5hxMA8
following the same reasoning as before i should be able to use it (with no power management), am i right?

I've also got myself one of these but have yet to use it as Dell DA-2 is proving sufficient for my needs. There is not a lot of information about these adapters around. It seems they were originally sold with Elo B-Series Touch Computer point-of-sale devices. They were made by the same manufacturer as the DA-2 (Delta Electronics).

The pinout is indeed different, and it can't be connected to Exp GDC directly. In fact the connector won't even physically fit, which is probably a good thing. An adapter/splitter to a 6-pin cable can be used, and they can then be plugged into Exp GDC's power out socket (I haven't tried this but it should be fine as it seems a straight pass-through, to the extent I could check with a multimeter. Note that somewhere in the Exp GDC manual it says not to use the power in connector as power out as this can damage the card, so maybe there is something more to all this though.)

The Tyco is noticeably longer and heavier than the DA-2. I bought it as a secondary power source for the 6-pin and 8-pin connectors on the card, in case the 216W the Dell is capable of were not enough but so far it seems I'm not going to need it. For the record, it wouldn't be running on maximum power all the time either, it just doesn't have low-power standby.