A Youtube Video where it's said "Don't Buy an eGPU".

I would like to read your opinion to The reviewer obviously had made his mind...

He says it's better to spent money for second gaming laptop than a eGPU. This makes sense. (<= irony)

The video's author seems to be basing his position on the limits of Thunderbolt 3 and how it impacts gaming performance.

Yes, Thunderbolt 3 provides less bandwidth than a full PCIex16.3 interface. Yes, there is additional latency due to the addition of TB3 controllers, and having to go through the chipset.

M.2 does not have to go through any controller. M.2 eGPUs are faster for this reason. Whether it goes straight to the CPU instead of through the motherboard chipset I do not know.

"As it stands right now, Thunderbolt 3 is just not suited to eGPU technology. It poses far too many restrictions of bandwidth, latency and attached devices such that it limits the performance and usability of eGPU enclosures".
The video should be titled, "Why Thunderbolt 3 is inadequate for eGPU", not "Don't buy eGPUs right now!". There are several interfaces that work better than TB3 for eGPU usage: M.2, LUA, MGD, AGA and so forth. To address all eGPUs and then point at one interface (TB3) for one shortcoming (bandwidth) is misleading.

It should also be noted that all he says is relevant only for users who 1. Have overly-powerful GPUs that become constrained by the TB3 link. I'm of the opinion that if you already know that you're going to be limited by bandwidth, you shouldn't be buying a 2080Ti.

Or 2. use their eGPU  for gaming and other bandwidth-intensive applications. I use my 1070 for compute applications that don't use much bandwidth to begin with, in which case the full compute power of the GPU can still be utilised. 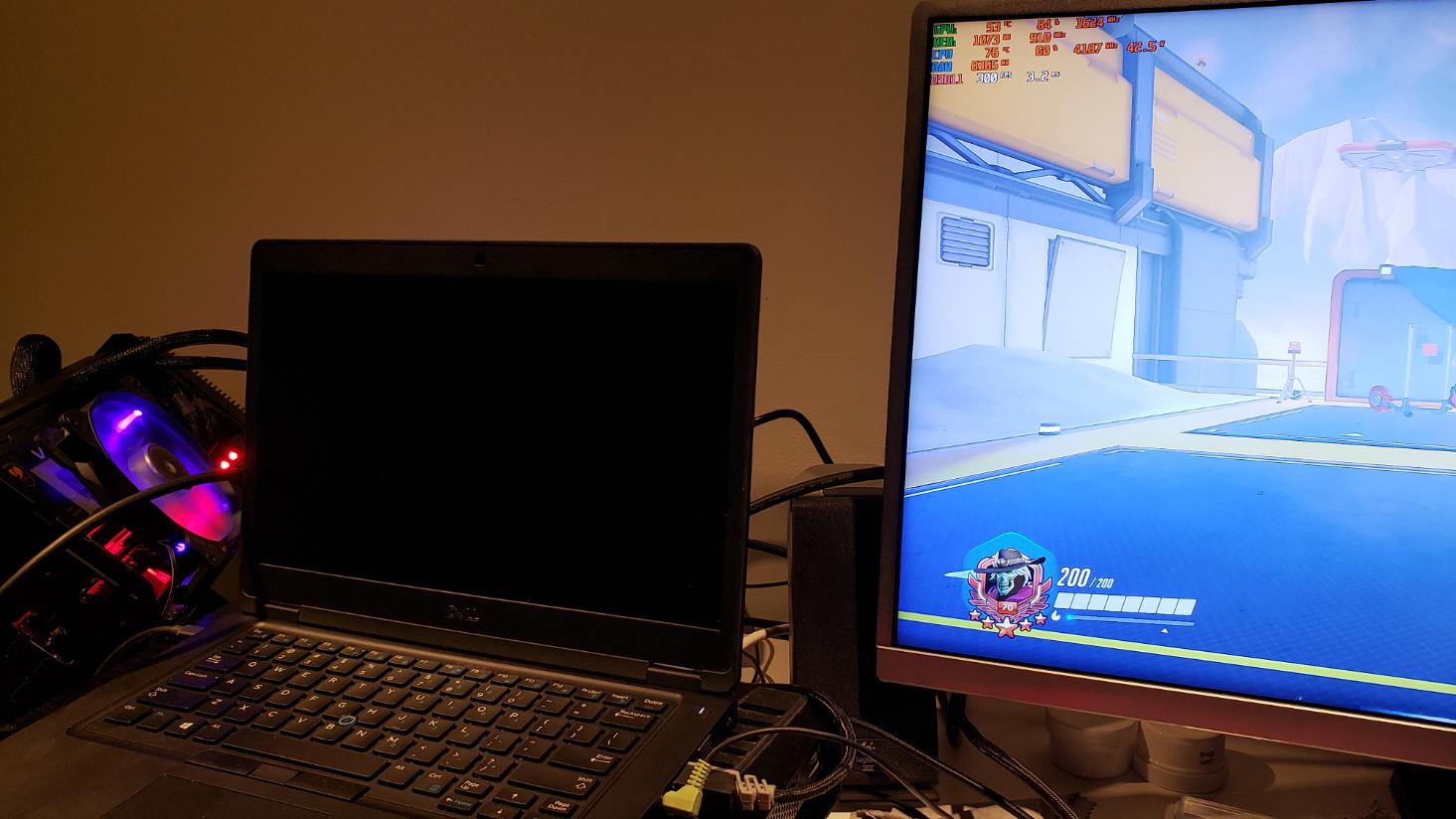 Overwatch hitting the 300FPS cap in 1080P, the bottleneck is actually my CPU/Memory speed which is 4200Mhz with hyperthreading off -200mV in that screenshot.

I'll update this with Ryse and Prey, Prey is downloading but Ryse is already installed.

He mixed his experience between core v2 with dual TB3 controller which shouldn’t have connection issue with its io port and gaming box that has TB3 connection issue due mixing with gpu data bandwidth. Second he’s probably testing the prey (loosing 50% he said) on 1080p I played 4K on this and the loosing isn’t that huge. Some point maybe he’s right because he’s pairing with gaming laptop with better dgpu bandwidth. TB3 egpu was being made for ultrabook to transform it in to gaming capable machine. But he didn’t recognize the advantages on gaming laptop, like better cpu may increase better and more stable performance, sharing heat between laptop and egpu enclosure may decrease laptop temperature which may bring longer lifespan, on some gaming laptop without DP egpu setting can make it possible to run adaptive g sync and more multiple monitor compared to using laptops ports.
I’ve which is roughly €1K enclosure plus GPU, I don’t think that 1K better for buying new gaming laptop, in my case I don’t see I need to upgrade to RTx 2080maxq Razer Blade since in some case rtx 2080 outperform 2080maxq Laptops like on Division 2 ultra 1440p and 4K, on 1080p some 2080maxq laptop beat my 2080 slightly though, but again with cpu gaming temperature on 70 which I don’t think on those laptop would be same unless it’s huge laptop like Alienware 51 with delidded cpu.

Ok so Prey plays perfectly fine, no stutters, no issues, settings maxed in 4K gives me like 35fps on my Vega 56 so I have to do automatic downscaling and target 60fps, I could target 50fps and let freesync do its job too. No idea wtf this guys talking about. TB3/eGPU is amazing.

There are some aspects completely disregarded in the video:

1) Some people just don't want more than one computer. I personally want all my things on one machine, using less space, not having to synchronise. This is not a matter of money but for usability and space.

2) Heating problems when using dGPU. Gaming laptops are not only fat and ugly, they overheat and make a lot of noise when you use the dGPU.

3) Wrong facts. He says TB is not connected to CPU as general rule which is just not true. It's not the only fact he got wrong.

4) Mac Users. But of course when we talk about gaming laptops, this means Macs do not count :/

Finally got around to watch the video. Was surprised it was Hardware Unboxed, a channel I do consider to be usually accurate in their assessment. And the comments on that video seem to agree that the reviewer missed the point. What I generally agreed with: Performance loss - it happens over TB3, sure. What I disagree with: Not recommended, because you can build a better PC, citing performance as a reason. Also the complete lack of knowledge/mention of the fundamentals of TB3 connectivity (Intel papers sum it up decently well - while this forum has investigated far more deeply - mostly a few google searches away). Of course eGPU purchasers know the cons of performance drops, plus it is more than evident that gaming is not the only use case for eGPU, and in terms of compute performance, bandwidth/latency does not always play a part (i.e, performance differences can potentially be 0 vs. Desktop). Performance is a function of type of load for eGPU which was not taken into consideration at all. It is clear that we usually run into latency limitations before bandwidth. If someone asks me I wanna game I say build a PC, but if they put in variables like college, work, laptop, etc. suddenly an eGPU can become potentially viable (portability comes at a price).

There are some aspects completely disregarded in the video:

1) Some people just don't want more than one computer. I personally want all my things on one machine, using less space, not having to synchronise. This is not a matter of money but for usability and space.

2) Heating problems when using dGPU. Gaming laptops are not only fat and ugly, they overheat and make a lot of noise when you use the dGPU.

3) Wrong facts. He says TB is not connected to CPU as general rule which is just not true. It's not the only fact he got wrong.

4) Mac Users. But of course when we talk about gaming laptops, this means Macs do not count :/

I agree with all of this.

1. I hate having more than one machine, I got up to 3 once accidentally, not including retired laptops, drive me crazy... elegance+space > money for me any day.
2. Dear god no (gaming anything).
3. Exactly.
4. See all of the above.

To quote Gilmore Girls: "We've been here before. I recognize this tree."

Every once in a while, yet another Youtube channel infatuated with their self-importance creates a video with a similar (often pre-determined) conclusion.

Not to say that they are entirely wrong: eGPUs are a specialized (and often pricey) piece of kit that comes with a certain amount of drawbacks and performance penalties, but they often consider absolutely nothing past the "Muh-FPS" angle of eGPU use, while trying to paint the entirety of the technology (rather than say, a specific use of it) as useless. Overall, they do not understand that there is more to the use of computers than "Muh-FPS!", which is amusing, because often their viewers are the ones that have figured that out and comment to that effect, so they aren't even tailoring their content to their own audience all that well.

A lot of good reasons have been already brought up in this thread as responses, but I can add my 0.02$ of why I haven't had a desktop since I realized eGPUs were a thing and that my work issued Lenovo X230 had an Expresscard slot back towards the end of 2013.

To add a newer set of reasons:

Youtube channels need to earn views and affiliate clicks. Why did he proclaim "Don't buy eGPU" then link to Amazon for Razer Core and other eGPU enclosures? This video was published when there was a lot of public attention following WWDC18. Look at early June 2018 queries in Google Trends.

of  2
All forum topics
Previous Topic
Next Topic
Topic Tags: