Update: Mac users can now use tbt-flash on macOS to update enclosure firmware as long as they have access to the firmare (.bin) file for their eGFX enclosure.

Due to no official eGPU support in Bootcamp, TB3 Macs have experienced very spotty successes with setting up, using, and updating eGPU enclosure firmware. Throw in the mix of issues is the lack of Intel Thunderbolt Software for Apple computers. We essentially need to scavenge other manufactures' support portals to download this piece of software.

I'm using the AORUS GTX 1070 Gaming Box for this guide as the H2D firmware update was recently released. This firmware flashing procedure was done with a mid-2016 15" MBP. I tried nearly a dozen different Intel Thunderbolt Software and they all don't fully work in Bootcamp. The good news I found is that we don't really need a functional Intel Thunderbolt Software in order to use an eGPU and update its firmware.

The TB3 15" MacBook Pro may be the best performance eGPU host but it's also a huge pain in the behind to set up and update the enclosure firmware. It's almost a love-hate relationship at this point for me with this laptop. Hopefully, by documenting my success through trial and error you don't have to go through the same issues I encountered. If you happen to be an Apple engineer or support staff reading this guide, please improve the firmware for these TB3 Macs so that they "just work" in Bootcamp.

Intel Thunderbolt Software version 16.2.55.275 is the one to use. This was meant to be used on a NUC Kit NUC6i7KYK. The installation completes successfully but the software itself won't run because it detects Bootcamp and says no-go. Below is the screen capture you'll see. Ignore it as the presence of Intel Thunderbolt Software version 16.2 in Windows is good enough for the Firmware Update Tool to run. The message itself is rather oxymoron.

Once you have both Intel Thunderbolt Software and Thunderbolt firmware update, it's time for the fun part. There are three main hurdles to overcome before you can click button to start the firmware flashing process.

Hurdle #1 - Thunderbolt FW Update Tool checks for the existence of Intel Thunderbolt Software before it can launch. Version 15.x and newer will get you through this.

Hurdle #2 - The second step is to locate the Thunderbolt device before Thunderbolt FW Update Tool can proceed. If you don't see your enclosure at this screen, it's because your eGPU is working great in Bootcamp. Wait, what?!! How is this making any sense?... In order to update the eGPU enclosure firmware, the eGPU functionality must not be running. You have two choices: either remove the GPU from the enclosure physically or hot-unplug then hot-plug to yellow-bang the eGPU. I know this paragraph reads like a bad joke but due to software glitches and unsupported devices, this is how I got it to work. Once you see your enclosure at Select Controller/Device click to select the Thunderbolt device under Port number.

Hurdle #3 - At Select FW Image click the Browse button and select the .bin firmware file. Unless you have Intel Thunderbolt Software version 16.2.55.275 installed, it will throw an error when you click the Next button.

If you manage to see this screen, it's going to work. Simply click the huge Start Thunderbolt™ firmware update button to flash the new firmware.

When the progress bar gets to around 90%, the enclosure typically power cycles itself for the new firmware to complete its updating process. Don't freak out if you see the LEDs on the AORUS Gaming Box turn off.

Once you see this screen, it's safe to close the Thunderbolt FW Update Tool then restart the computer.

How's that for plug-and-play? 😀

This procedure may be unique to the Thunderbolt 3 15" MacBook Pro. If you have the 13" MBP you probably won't encounter hurdle #2. Give it a try and let us know how it goes. Feedback are welcome to improve this guide.

I really can't thank you enough. Almost a week I tried to update the gaming box without any success. Who could've imagined I needed to take it apart for the update to work... Again without your continenous help and guidance I think allot of people wouldn't get this far. Just as a small token of appreciation I made a small donation to Rastafabi. Keep up the amazing work.

@David Daniel Thank you for the donation to Rastafabi. I'm glad to hear you're able to flash the firmware. It was really a confusing process for me too. I spent more than 3 hours going over different Intel Thunderbolt Software versions and connection methods.

One interesting tidbit from trying Intel Thunderbolt Software version 17.1.64.250 is external GPU supported: Yes on this late-2016 15" MacBook Pro. I did not see this in older versions.

Can I get some clarification as to what "hot-unplug then hot-plug to yellow-bang" means, and how difficult this is to do? I've sadly had to re-install my Boot Camp partition 5 or 6 times through the process of getting the box to work stably (most recently, I had to re-install Windows because I cannot get rEFInd to actually install properly and last night it just decided not to run when I restarted Windows, leaving me unable to get past the Windows boot up screen. So now every time I shut down my Windows partition I need to enable PCI x16 and go to the mac side to run the rEFInd installation script to make sure it will be my boot loader [if you have any tips on getting rEFInd to consistently be my boot loader that would be a huge time saver]).

Anyway, I don't feel comfortable actually removing the GPU from the enclosure as I don't want to risk any damage / having to re-install Windows for the upteenth time, but I can't find anywhere what hot unplug, hot plug, and yellow bang means.

Also sincere thanks to everything you've done, without you I'd essentially have a very expensive paper weight.

I have a 2017 MBP running great on Bootcamp with a Mantiz Venus + 1080ti. Are there any reasons I should change the Thunderbolt 3 drivers?

@Keegan Shay Hot-unplug then hot-plug is to disconnect then connect the eGPU enclosure while the MacBook Pro is running in Windows. Doing this will make the enclosure communicate to Windows but eGPU non-functional due to error 31 or error 12. You can see the yellow triangle with exclamation mark on the eGPU in Device Manager. Some of us refer to getting this error as yellow-bang.

If rEFInd is not reliable for you, I'd suggest following Goalque's instructions to use apple_os_set.efi on a USB stick. Then hold OPTION key at boot to select your startup volume. Did you disable SIP prior to installing rEFInd?

When I try to update the firmware it shows the 'PCI\VEN_8086', but it doesn't show the 1070 below it. It also says 'This controller doesn't support device firmware update'. In the footer.

Here's an image of the issue: 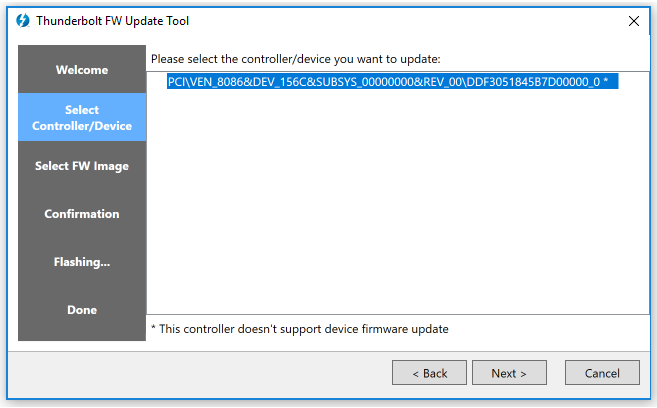 But nothing seems to work. I have another issue that may or may not be related? I have the Aorus Graphics Engine installed, but it fails to acknowledge the Gaming Box.

Other than the issue with this update, the engine not acknowledging the Gaming box and some random freezes, everything else seems to run decently and I'm sure the box is working. It is also displayed in my device manager.

Any help would be greatly appreciated. Thanks.

That is correct. All Thunderbolt 3 enclosures have required a native Thunderbolt 3 host to perform the firmware update. You may want to confirm using CUDA-Z that you are already getting matching 16Gbps-TB2 bandwidth. In which case there is questionable value in upgrading to the H2D fixed firmware.

Yeah SIP is disabled, I've come up with a few steps to make sure I don't run into any rEFInd problems in the future (I pretty much just turn of PCI x16 and boot into macos every time I'm going to be away from my laptop for a few hours, ensuring that I won't get stuck booting into windows without rEFInd again, since I can re-enable the program from the mac side [I also made a USB boot manager with that guide just in case]). Thanks for the info, I'm still stuck on hurdle #1 though, I installed the 16.2.55.275 Thunderbolt software, but I'm still only getting the "No active Thunderbolt (TM) controller found in the system or thunderbolt (TM) software is not present in the system" error when I run the FwUpdateTool, any ideas?

Thank you very much for this guide.

Just wondering, since I am new to this community (Just ordered my first eGPU and still waiting for it to be delivered)

What is the benefit of this Guide? Is it that at the end of it, my eGPU (Aorus Gaming Box) will work plug and play without any need of the other workarrounds described in this forum, or is it "just" for Firmware upgrade in order to fix the H2D issue and I still need the workarrounds to initial setup my eGPU in Bootcamp?

.
ReplyQuote
of  11
All forum topics
Previous Topic
Next Topic