I am planning on using an ADT-Link R43SG x4 M.2 interface and I am currently facing issues with the selection of a PSU as many websites suggest that the power of the Dell DA-2 does not suffice to handle the peak power consumtion of my graphics card.

I was thinking on getting one of the countless HP DPS-460 (which come in many different variants) for less than 10 bucks on eBay and since I don't have a soldering iron in my home, I planned on simply getting a breakout board for the PSU for 2 bucks.

Most of them have only 12v 6-pin PCIe outlets and I believe that I cannot connect them directly to the R43SG because the only way would be to connect to the 8-pin GPU power outlet on the R43SG via an adapter cable. And to connect the power sockets on the graphics card itself directly to the breakout board, instead of going through the R43SGs outlet in that case, obviously. Does anybody think that this would work? My thought was that all the 12v lanes and GND lanes should be connected somehow to make a closed circuit.

If not, my other idea would be to connect to the Dell DA-2 port with the 6-pin PCIe connector, since the DA-2 connector pinout looks exactly like a PCIe 6-pin connector pinout minus the Sense and Remote pins. Would it work this way? Do the Sense and Remote pins need to be connected somehow for the R43SG to work?
Would you suggest connecting the power sockets of the graphics card directly to the breakout board, instead of going through the R43SGs outlet, like above? My concern would be, when not doing so, that the wire cross-section of the PCIe 6-pin cable would not be wide enough to carry the current when the power consumption peaks. 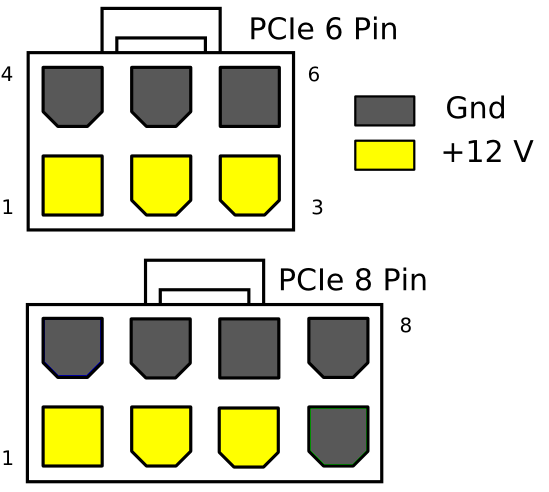 The picture is from nando4's thread.

Thank you very much for your time and effort in reading my post!
Neither do I have experience in electronics, nor is my English good but I hope you were able to understand me anyway.

Had the same Dell DA-2 power dilemma for a RX 580 which was solvable by either with a modified VBIOS with lowered TDP or by using a second Dell DA-2 adapter. Details here.

Thank you so much for your answer!
That is already a good idea, definately a resort when I cannot get the other thing to work.

In the US, the Dell DA-2 seem to be fairly cheap, but in Germany, however, it's a little less than 25 USD which makes 50 when buying two, whilst the HP is less than 10 USD and only one of them is needed. And as cost-effectiveness is the reason for me building a eGPU setup instead of a desktop, it would like to keep it as cheap as possible.

Since you have a very good understanding of the topic: Do you, or anybody else around here, know if one of the possibilties above would work with the ADT-Link R43SG? According to the build guide, you haven't built a setup with this interface yet, but I would be very grateful for any hint you or anyone else here might have.
Thank you so much in advance!

2. wire up any PCIe power connectors you require that will directly power the video card

Just note, the HP DPS-460 PSU is a server PSU with a tiny fan that spins at a noisy high RPM under load.  The fanless Dell DA-2 is noiseless.

Thank you for your answer!

That is very good. The noise problem remains, of course, but when two DA-2s cost five times as much as one of the server PSUs, I think I will have to go with the latter.
But since the DPS-460 and the DPS-750 are both around 10 USD, do you, from your experience, think that the DPS-750 would be more quiet than the DPS-460? As far as I know, both of them have at least a temperature sensor and can control the fan speed.
The DPS-750 is a little bit bigger and thus has a larger surface area, as well as two fans instead of one. Energy effiency is not the priority, as I have an all-in rate in my dormitory.