Sooo my taobao adventure ended pretty quick since I couldn't figure it out and and agent is even more expensive.
So I reached out to adt-link personally on there website.
They could offer me the taboo pricing of around 100$ but they charge 35$ for shipping.
I asked them if it could be any cheaper and they couldn't give me cheaper shipping option.

So eventually I returned back to my original list with the following parts:

I noticed that the SSD enclosure is on sale now only 88$.
Thats a good price but I saw that on taobao the prices are a little lower so I've reached out to the seller to see if he could discount it even more. (no reply yet)
But during my search for the SSD Enclosure it self and to find the "actual" price I came across the SSD enclosure on taobao and I wanted to see why there were 2 prices.
I got redirected to tmall and translated the website and found out that it was because one of the packages you can choose from includes a GPU adapter.

So I'm trying to get a deal on the SSD enclosure on Aliexpress and then I will buy my GPU adapter separate.

I'll let you all know how it goes but I thought it was a good find on the SSD enclosures mod to egpu story.

I bought a few from digikey and they work well. The picture shows the size difference of the connectors, and how it fits under a double wide GPU connected to an M.2 to PCIe x4 adapter.

How far are you with your build?

I'm still waiting for some parts.
So can't tell if my TB3 m.2 Enclosure will work.

To solve my problem (without using something like the R43SL) I've ordered a right angle PCIe to PCIe adapter. This will move the Thunderbolt 3 to NVMe drive enclosure to in front of the fans of the EGPU (puts the enclosure flush on the right side of the GPU bracket). I have right angle PCIe to PCIe adapters already, but they are not tall enough (by 5 mm) for the width of the GPU. A left angle adapter (more rare) would put the enclosure to the back side of the GPU, but further away to the left and below the graphics card (looking at the GPU backplate), taking much more space.

Another option is an extender riser which would put the enclosure below the graphics card a couple centimeters.

I'll post pictures when I get the other PCIe risers. Right now, I have a Radeon RX 580 in a Sonnet Echo Express III-D with external power supply connected to a Mac Mini 2018.

@maiiikell Correction, you're using a different enclosure than the Samsung X5. I think your enclosure is very similar to mine.

I just got the time to assemble everything without the PSU (Corsair VS450). The PSU should be arriving tomorrow.

What I did was cut a piece of the SSD enclosure to make sure I could put it back together with room for the cable from the R43SL. I covered the cut edged with some electrical tape to make sure it wouldn't damage the cable from the R43SL coming out of the enclosure. I will fit it with an Asus AMD RX 5700 instead of the RX 5700 XT since I got a good deal on it (299 euro).

Since I don't have the PSU yet I can't test it right now. Will share my test result tomorrow when the PSU arrives.

Here are some picture of my build so far: 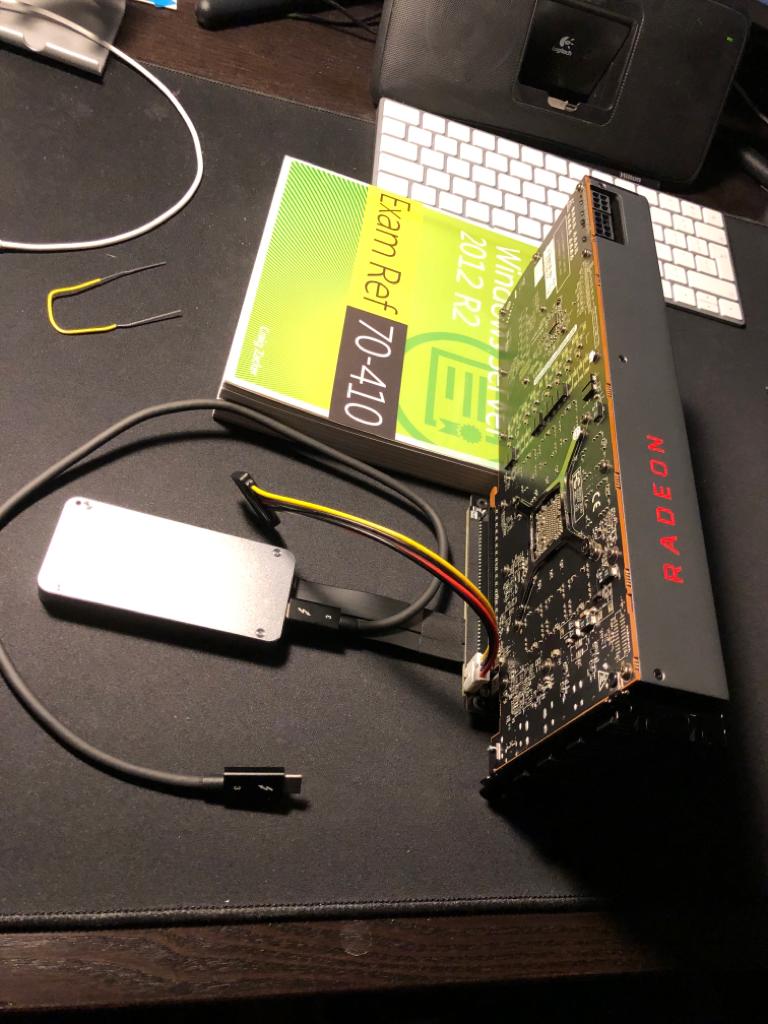 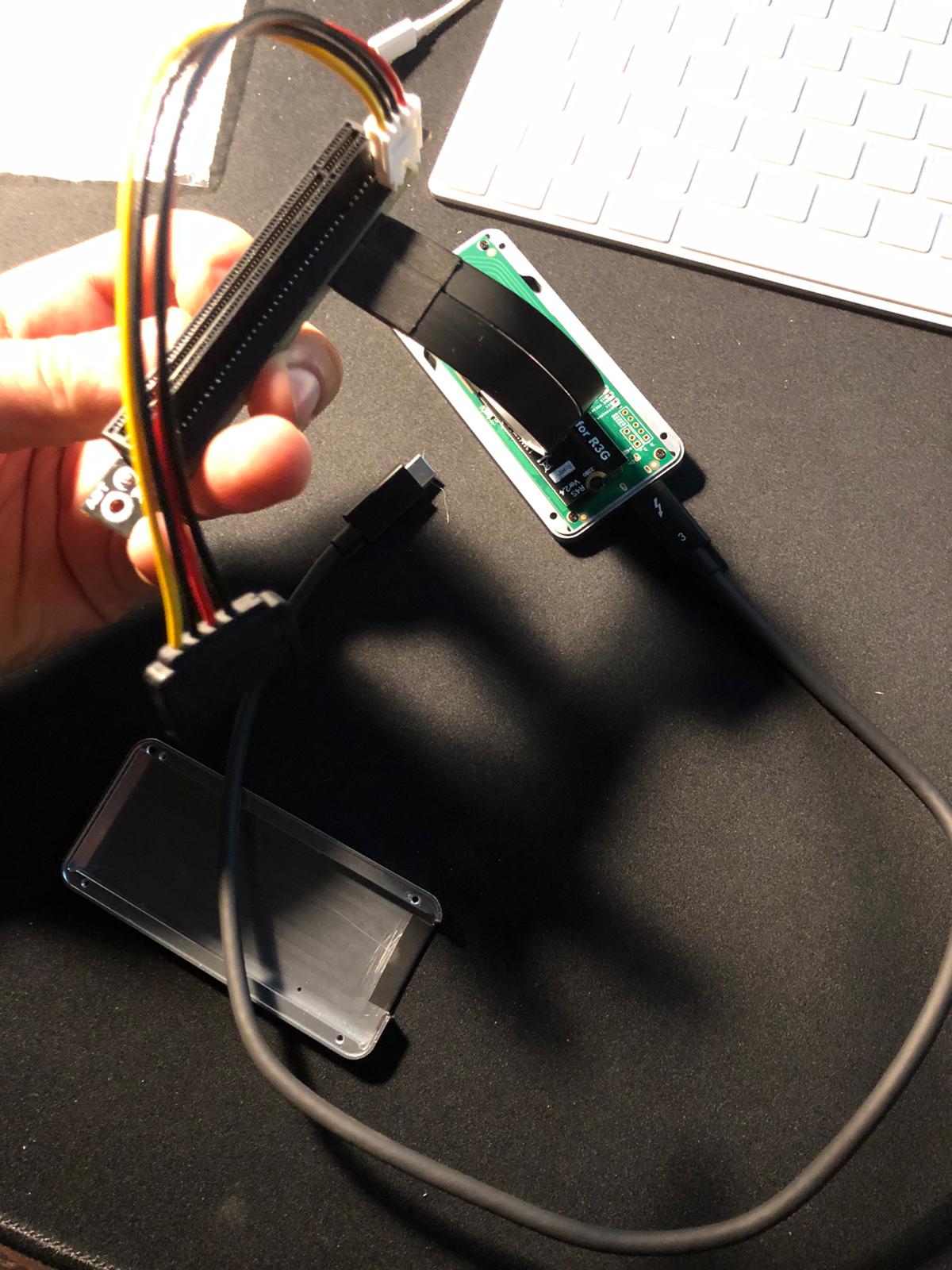 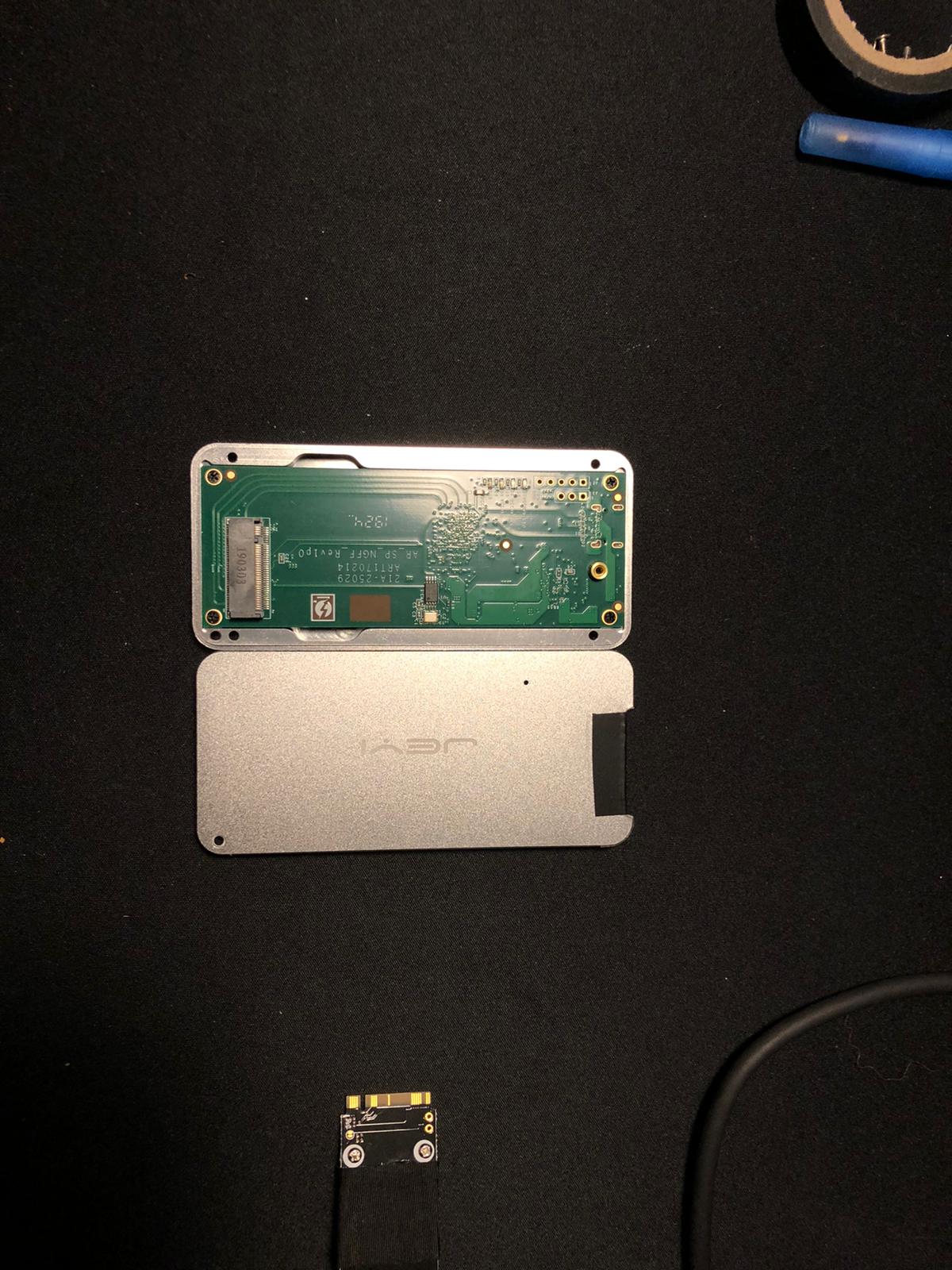 Good stuff @maiiikell, I like how you opened up the case.

I ordered a few Mean Well 12V power supply units (because they are very small), some atx pc plugin boards (so I can get 5V) to the 4 pin power connector on the R43SL. I plan on building a brickless case for my 1050ti as egpu.

@maiiikell What's the length of the R43SL? Seems really short (20 cm?). Actually, might be better if it was shorter (minimum length is 10 cm), then you could fold the M.2 enclosure up against the back of the GPU and place both the GPU and M.2 enclosure inside a custom eGPU enclosure.

What's the model number of the Mean Well power supply? I would consider a short, narrow, and deep power supply to fit under the GPU, behind the x16 slot. In your case, if the enclosure is on the backside of the GPU, then the power supply could go there also, and it could be a wider (up to the height of the GPU) and deeper (the length of the GPU, up to the position of the M.2 enclosure).

@itsage found a cheap Thunderbolt to NVMe enclosure available only for a limited time. It has a similar orientation as the Samsung X5.

I mentioned 90° USB-C connector. There's a post that discusses those. I posted some pictures that show where I would use one with the M.2 enclosure that I have.

Ah didn't know that, all I figured was that the 12V power supplies won't work for the floppy power connector the R43SL has so I'll have to connect it to ATX plugin board (PICO PSU 120W in my case) which converts 12V to 3.3V and 5V outputs.

Thanks! It may not look really good but im satisfied with how the ssd enclosure turned out.

Im still not sure what to do with the casing.
I don't own a 3d printer and i don't really have the skill for that.

I'm thinking nice wooden frame with acrylic panels and then with the possibility to slide one panel off to gain acces. Not sure about it.

Will let you guys know when i got everything up and running.

ReplyQuote
of  10
All forum topics
Previous Topic
Next Topic