I'm considering getting a Ryzen 4000 laptop, which would mean I won't have Thunderbolt on my laptop.

I still really like the convenience of plugging all of my peripherals (keyboard, mouse, monitor...) into a hub, and connecting them to the system via that single cable.

Is it possible to utilize my computer's internal, discrete graphics card via a USB-C hub? With my current laptop (and current USB-C hub), connecting to USB-C to HDMI to my TV's HDMI port, I can't see my TV in NVIDIA Control Panel to set a custom resolution or change other settings. This suggests to me that my dGPU doesn't "see" the connected display, and it's only working off of the laptop's iGPU.

Computers with a built-in dGPU and iGPU usually only have one of them connected to their built-in ports. I think it's really weird that they would connect the iGPU instead of dGPU.

What is your current laptop? Do you have Intel Graphics Control Panel installed (or whatever the current name of the Intel graphics software is)?

View devices in Device Manager by connection. It should tell you which GPU the display is connected to.

Mac laptops always have dGPU connected to USB-C ports if it exists.

It's a MSI GS63VR, the first version with an i7-6700HQ. It's got Optimus, so I'm under the impression they should "both" be connected to the ports. But NVIDIA control panel doesn't seem to think so. I never tried running a game via the USB-C Hub's HDMI port, but I assumed it wouldn't be good. 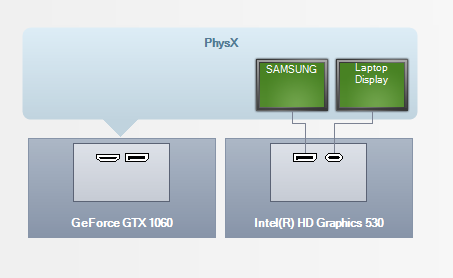 This is what I get when I open up NVIDIA Control Panel while my TV is hooked up through my USB-C hub. The TV is definitely limited to 30Hz while connected in this fashion, though it's got 60Hz and a low-latency game mode I normally use.

I tried playing a game of League of Legends (it was the most convenient thing with a FPS counter), and it stayed fixed at 60FPS in 4K max detail, so it's possible the dGPU was in charge of the rendering but the performance felt awful. Maybe that's just the 30Hz limitation. I didn't get to do much fooling around because the power cut out for a long period and I needed to get ready for plans.

Edit: For the record, when I connect my TV to the HDMI port on my laptop, it behaves like I'd expect/want. I'm able to try setting custom resolutions and all of that jazz. When it's connected via the hub, none of those options are available.

On a laptop using NVIDIA Optimus it's normal to have the iGPU wired to the video output such as HDMI. When the dGPU is being used, the framebuffer output actually gets copied to the framebuffer of the iGPU, which then outputs it to the laptop display or external display. When the dGPU isn't in use it's allowed to power down and the iGPU outputs to the display from its framebuffer normally. This is also why adaptive sync (G-Sync/Freesync) generally doesn't work on Optimus-enabled laptops because the dGPU isn't directly connected to the display.

Are you able to set the desired custom resolution/timing in the Intel Command Center software? What res and refresh rate are you trying to target?

What you're trying to use is something called USB-C Displayport Alt Mode where some or all of the data lanes of USB-C are used for Displayport signaling. Your USB-C hub most likely doesn't allow for more than 4K 30Hz output due to overall USB-C bandwidth restrictions because of having to allocate half (2 of the 4 superspeed lanes) of the bandwidth to the USB ports/Ethernet/SD/etc). If you want 4K @ 60Hz your best bet would be to eliminate the hub and use a direct USB-C to Displayport cable.

The age and generation of your laptop suggests it probably has Displayport 1.2 support which would give 21.6 Gbps total bandwidth over 4 lanes. Most USB-C hubs with video outputs split the lanes evenly 2/2, so the video output gets 2 lanes worth of bandwidth for a total of 10.8 Gbps while the USB-C hub data ports (USB-C, USB-A, Ethernet, SD card, etc) get the other half. 4K @ 60Hz requires 14.93 Gbps of bandwidth which is why most of these hubs will only advertise and/or support 4K @ 30Hz, at least via Displayport 1.2. DP 1.4 has more bandwidth per lane and doesn't necessarily have this specific problem IIRC.

USB-C hubs with multiple display outputs have a built-in MST hub (not usable by macOS) which share the DisplayPort bandwidth with connected displays (a lone display should be able to get full bandwidth).

Thanks for those clarifications, friends!

Would HDMI-Out work? Would a DisplayPort-to-HDMI cable work if my TV's only inputs are HDMI?