You may not have heard about Sonnet Breakaway Puck. It’s the first macOS compatible handheld eGPU enclosure with an MXM graphics card, and I’ve been looking forward to checking it out in person. I was fortunate enough to receive one of the first production units for an eGPU.io review. My media sample has a Radeon RX 560. Sonnet plans to offer one with an RX 570 as well. Here are some unboxing photos and initial impressions.

You notice right away that the entire package is smaller than most eGPU enclosures on the market. Sonnet also sent the optional VESA bracket and .5m DisplayPort cable for mounting the enclosure behind a monitor.

Inside is the Breakaway Puck itself, a 160W power brick, power cable, and .5m Thunderbolt 3 cable.

This thing is small, really small. I set one of the smallest-size GPUs, an R9 285 mini ITX Compact, next to the RX 560 Breakaway Puck for scale.

The Sonnet logo lights up in Blue when there’s connectivity with a host. The 160W power brick is fairly large. I have no complaints though because it keeps the eGPU enclosure size minimal.

The VESA bracket has rubber padding on top to keep the Breakaway Puck snugly in place while preventing scratches during insertion and removal.

The enclosure Thunderbolt firmware is version 25.1. Power Delivery is set at 45W.

Here’s a quick comparison of Luxmark results between the iGPU, dGPU, and eGPU.

Testing and a full review of this Sonnet eGFX Breakaway Puck RX 560 are under way. In the meantime, please let me know if you have any questions I can answer right away.

This article is also published as a forum topic here »
Connect with:

Awesome First Impression review.
Could you please do a benchmark with a Game that requires massive power of CPU+GPU together Like Civilization 6 or XCOM 2 with 13″ MacBook Pro?
I believe it will be a good way to test any EGPU and give a clear idea to all the gamers like me.
Thank you and please keep making more reviews

Can you please do a side-by-side comparison with Gigabyte AORUS Gaming Box? Thanks!

This is amazing! And just as I bought the larger Sonnet… damn in!
Will have to see if Apple brings a small enclosure option to the table this spring before my next purchase.

This is amazing! And just as I bought the larger Sonnet… damn in!
Will have to see if Apple brings a small enclosure option to the table this spring before my next purchase.

Guys and girls, have you seen Sonnet’s page?   http://sonnettech.com/product/egfx-breakaway-puck.html 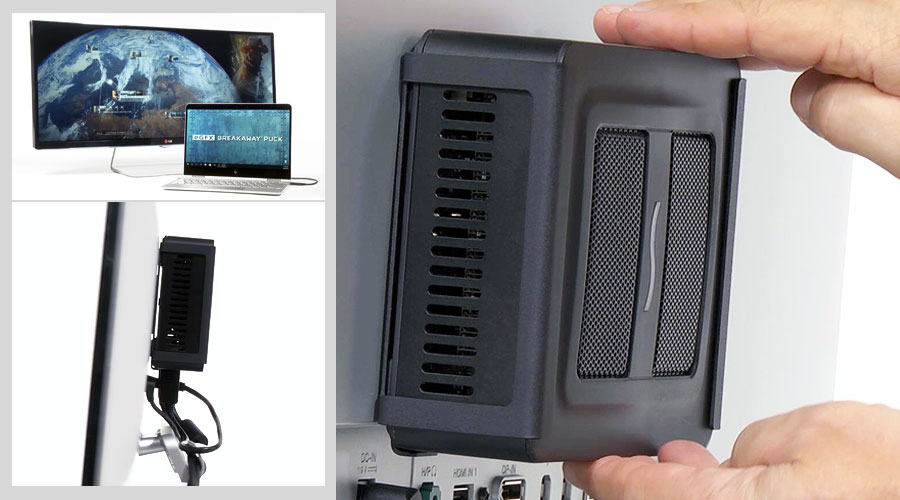 Aye, pretty shocking Design wise… I bought the 350w version so can only go up to a 580 if I get another AMD card… would love otl get a Vega 56 but think they draw too much power? Annoyingly a lot of the error 12 fixes have made more sense to me since I have sold the card I had that had the issue (570!). That makes total sense. I hear what you are saying about swappability, I’m on my 4th GPU in as many months (testing/upgrading) but for me the size of most enclosures is a real issue. I… Read more »

I am slightly disappointed. I liked the slim format of the Acer Graphics Dock (and hopefully the upcoming Lenovo dock) much better. This is easy to transport but not exact use-in-a-coffee-shop sized.

Not sure if you are still under NDA, but as always some pictures of the box internal, pcb, components are always welcome!

Not sure if you are still under NDA, but as always some pictures of the box internal, pcb, components are always welcome!

I’m taking it apart this weekend for the full review. 😀

Posted by: wimpzilla
Not sure if you are still under NDA, but as always some pictures of the box internal, pcb, components are always welcome!

I’m taking it apart this weekend for the full review. 😀

If the card is a standard MXM module, and the cooler is reasonably easy to remove/reinstall, then upgrading to a different card should be doable. Of course, finding MXM cards is not trivial, but not impossible, especially if you do not need the latest/greatest. Looking forward to the disassembly.

Posted by: Yukikaze If the card is a standard MXM module, and the cooler is reasonably easy to remove/reinstall, then upgrading to a different card should be doable. Of course, finding MXM cards is not trivial, but not impossible, especially if you do not need the latest/greatest. Looking forward to the disassembly. All MXM performance  is far away than the standard PCIe. Due to the 2 phase power design, Max will be about 150W or even lower. Enjoy the size but dont expect to have a similar standard NV 1050 performance… Base on my experience, logic should be like this:… Read more »

Here’s the component view of this Breakaway Puck RX 560.

Looks like a standard MXM-A card. That is good. It also looks like a MXM-B should also fit, which is how I guess they plan to get a RX570 class card in there. Overall, this is a very nifty device. Do we have any idea about what the pricing on this is going to be?

No word yet on pricing. If we were to start with a mini eGPU using the AKiTiO Node Lite, the total cost for an RX 560 eGPU would be close to $400. The Breakaway Puck is roughly half the metric volume of an AKiTiO Node Lite and has 45W Power Delivery.

Thanks you for the pictures.
Really good looking thunder board, packing.
I would have liked Sonet extended the thermal pad, cold plate on the TB controller, even if on half of it to make contact with the heatsink, would have been a must!
Nice piece of hardware!

Super neat idea from the folks at Sonnet Technology! This is a really elegant way to handle multi-monitor systems using existing technology. I hadn’t heard of the MXM format before this, and now I can’t help but marvel at the space-savings that something like Sonnet’s Breakaway Puck could offer ultrabooks if the idea catches on.

Question from the peanut gallery: How does the noise compare to that of a MacBook Pro 13″ or an Aorus Gaming Box?

Not working for me with ASUS Radeon RX 580 ROG STRIX. I’m unable to understand what the issue is. Changed the PSU from 350 to 600 as well but nothing happening. My MacBook Pro 2017 (MacOS High Sierra) crashes as soon as I connect the eGPU to it. Anyone here can suggest me any solution?

This would be perfect for my wife’s MBPro (depending on price, of course), but I wish it had at least one USB port so you could hook it up to a monitor or USB hub. The way it’s designed now, it would still require 2 cables routed to the laptop. I’d buy an Aorus Gaming Box right now if NVIDIAs were already plug-and-play on High Sierra.

This may sound stupid and unreasonable but is it possible to replace the rx 560 mxm-a card and switch it with a 1050ti MXM-a card or even a 1060 MXM-b card? Thanks

theapplemaniac, why not just get an Aorus Gaming Box with a GTX1070 from the get go, saving yourself the trouble and expense of swapping out an expensive MXM module? It offers the smallest eGPU enclosure with a powerful GPU. See https://egpu.io/external-gpu-buyers-guide-2017/#tb3-enclosures

We can see this comparison above the Puck is smaller but once the PSU’s size is factored, their total combined volume starts edging towards the Gaming Box’ size.

Working against the Puck is the Gaming Box’ significantly more powerful GTX 1070 GPU. We expect this given Nvidia has been able to extract more performance per watt from it’s silicon.

Mounting the Puck on the back of a LCD with say the VESA mounts would make it’s size attractive. For a standalone & powerful compact desk unit, the Gaming Box is difficult to look past.

An even more powerful GTX 1080 Gaming Box will be available in the coming month in the same compact enclosure.

Thanks. I was considering that as well.

Now can buy this enclosure:

Well. Sure, it is small, but the price sucks.

i have my eye on one of these. my MacBook Pro early 2011 has the dead GPU issue and have it running only on intel hd 3000 at the moment. will this be a short term solution for this machine, which i can transfer to a better one later on?

@Grant Davis , yes, this enclosure can be paired with your system. Pls see here for how.

thank you very much for the link, I feel more confident at buying one when I’m ready, cheers!

I am going back and forth every day thinking on buying this but I am hesitating a lot because of that monstrosity of a power brick :/ the whole thing is horribly oversized for the RX560, they should’ve put the display connectors parallel and had a thinner heat sink + fan… eh. :/ Where’s the Lenovo dock teased when we need it so badly :/

I am dying to know how Civ VI works with a 2017 13″ MBP in OSX with one of these pucks.  I haven’t been able to play since I started traveling last year and I get the shakes really bad lately (especially with Christmas coming up).  I’m torn between the 570 puck and the 1070 AGB.  I need something with the minimum of fiddling so I’m leaning toward the 570 puck if it is “native” under OS X – as long as it can push Civ reasonably, I’ll be good to go!

Hi, I like to know if the Puck 560/570 will work well with the 8K display Dell UP3218K. I made a thread of it here https://egpu.io/forums/thunderbolt-enclosures/drive-the-8k-display-dell-up3218k-fed-via-two-dp1-4-using-sonnet-puck- 560–570-or-other-solution-thoughts-comments/ . Sonnet’s support say it’s not supported and not even in warranty however I thought 8K via two DP1.4 cables is a standard usecase? Do you have any thoughts?

Anyone using on Bootcamp (Windows 10) ? If yes, what you have done do work ?
Thanks

@Ricardo Figueira I had the Breakaway Puck 560 running well in Windows 10 1803 with the 2018 Mac mini recently. I connected the eGPU prior to boot and it worked that way (Intel iGPU was deactivated by firmware). If you’re experiencing error 12, I’d recommend looking into eGPU EFI Boot Manager.

Posted by: itsage
I connected the eGPU prior to boot and it worked that way (Intel iGPU was deactivated by firmware).

You didn’t have to do anything ? You just plug-in (eGPU connected) on you mac before boot start and then on windows was detected ?
Can you explain better this (Intel iGPU was deactivated by firmware) ?